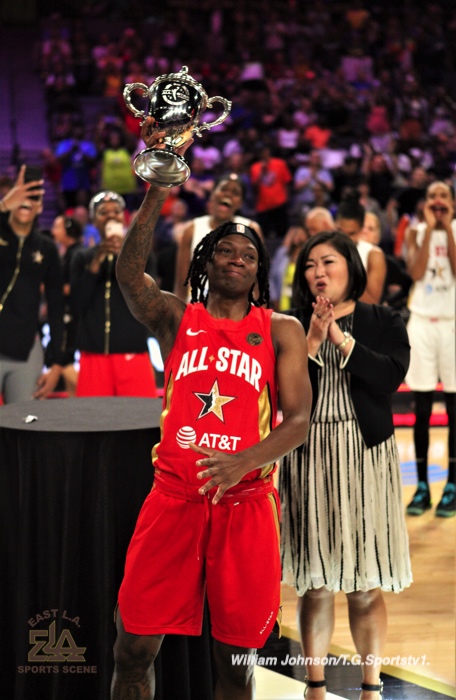 (Mandalay Bay Events Center, Las Vegas, NV)—The 2019 WNBA All-Star Game was a sight to see for the 9,157 fans who filled the Mandalay Bay Events Center (Home of the Aces), to capacity while cheering on their favorite players. In adopting their brethren’s player selection format, (the NBA model of having the Team Captains choose their players), Team Wilson, hung on to claim the victory, (129-126) over Team Delle Donne. All in all, it was a “win-win-win” for the fans and the players as there were many, many happy faces in the Events Center. The third win goes to the ever-growing national, and global, fan base of the WNBA. The game was broadcast “Live” on the ABC TV Network.

Pre-All-Star Game Festivities: On Friday, 7/26, the WNBA made a significant change in moving the 3 Point Shot contest from Game Day, to combining it with the Skills Challenge. The 3- Point contest had usually taken place during halftime of the All-Star game. This move now brings both the NBA and the WNBA into the same All-Star formats. 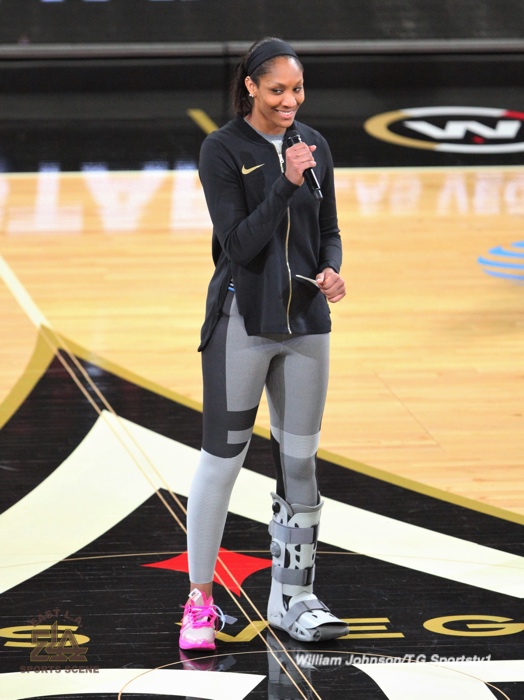 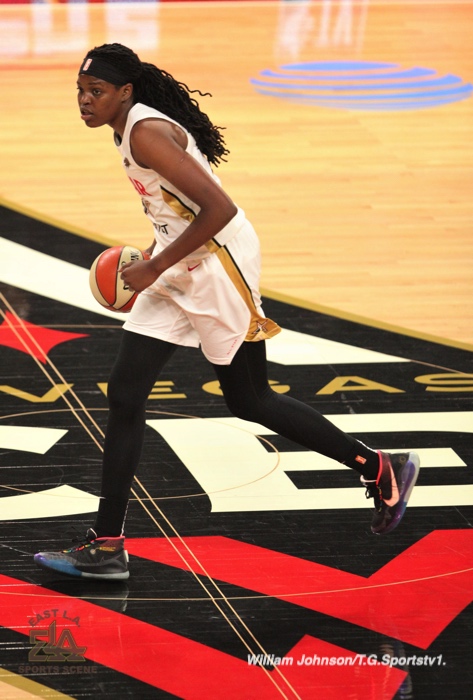 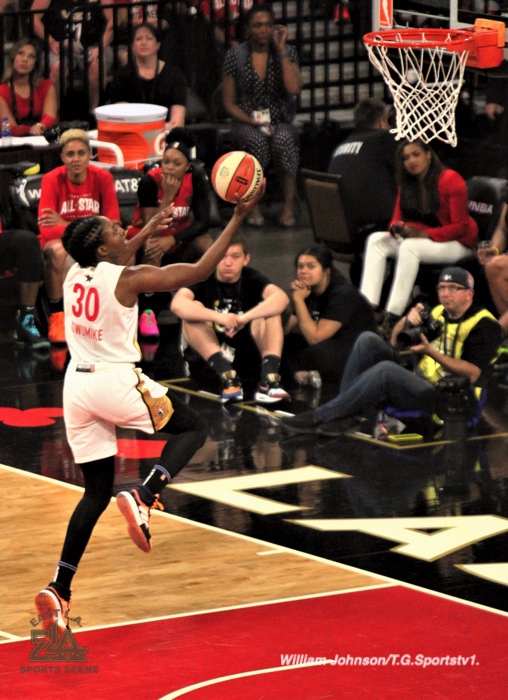 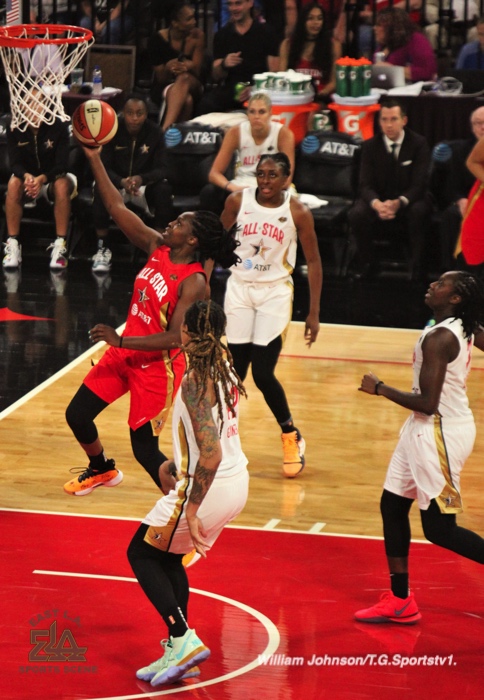 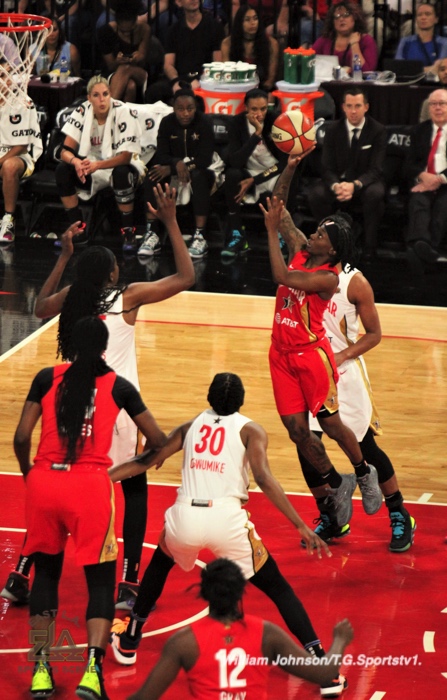 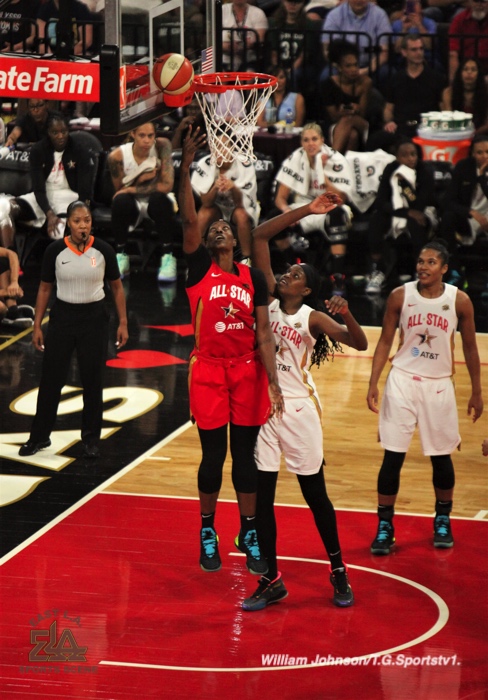 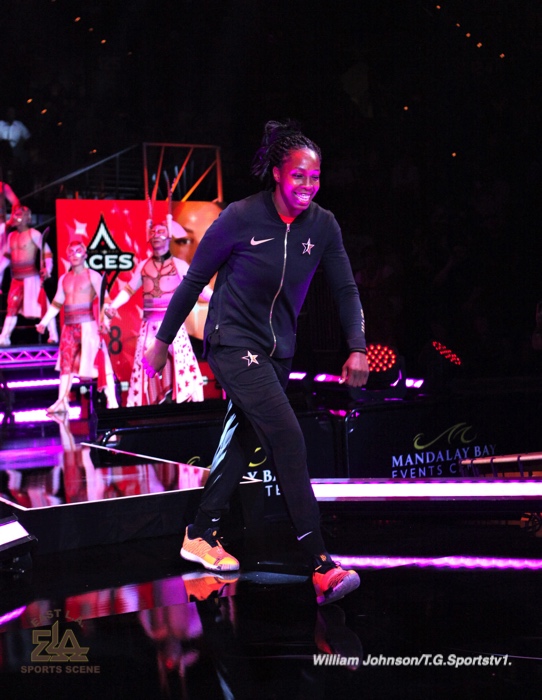 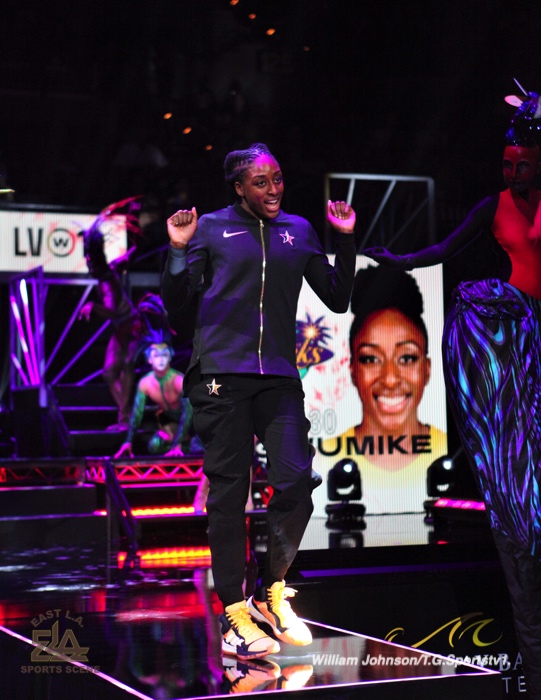 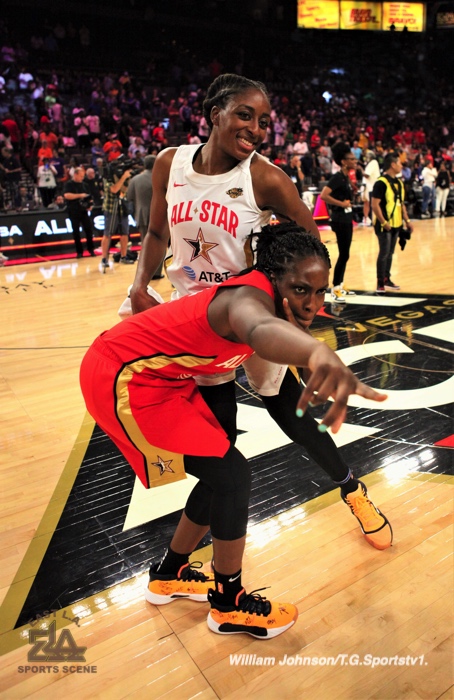 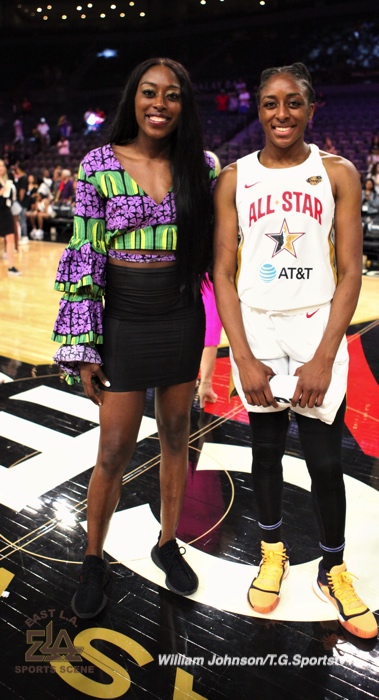 Innovation On the Horizon: The game also served two experimental purposes, one was the reduction to (:20) seconds on the shot clock, and the second was a take-off on the substitution process, whereby a player.  entering the game does not have to report to the scorers table, and can enter at any time from anyplace, just by doing as the NHL players do in their games—by an exchange with her teammate and then immediately entering the court as an active player. The WNBA Officials’ hierarchy is now reviewing the game and will publish a report of their findings, hopefully, at an upcoming press conference, a media availability, or perhaps “on-line” for everyone to see.

Nonetheless, the game’s offensive pace was pretty wide open from the “git-go”with not a lot of team defense being stressed. This was extremely evident as the Phoenix Mercury’s center, 6-9, and 6 x All-Star, Brittney Griner, stole the show with three rim-rattling dunks during the game.

MVP Showcase: Erica Wheeler, appearing in her first All-Star game for Team Wilson, was an undrafted backcourt player, but is now a dynamic member of the Indiana Fever, earned herself the MVP of the Game with her stellar performance from the 3 point-line as she poured in (25) points (including a record-tying seven 3 pointers and 7 assists). She accomplished this feat in only (18:45) minutes played. It was only fitting that she hit the clutch, and winning basket coming with just seconds left in the contest.

The L.A. Sparks’ Nneka Ogwumike, appearing as a reserve in her 6th All-Star game, and first time for Team Delle Donne, showed her special and extraordinary athletic skills by leading her team’s scoring efforts with 22 points (11 field goals) to go along with 6 total boards (3-3) and 2 assists in (17:54) minutes. Her Sparks teammate but All-Star game opponent, guard Chelsea Gray, making her third career Game appearance, was a starter for team Wilson, and played an all-around solid game as she finished with 8 points and a game-high 10 assists in (24:07) minutes of play.

Next Up: The Sparks return to Staples Center today, on 8/1 as they host the visiting Las Vegas Aces. The tip-off is set for 7 pm and will be televised on ESPN2 Cable. Their next home game will be on Sunday, 8/4 at 2 pm, when they take on the Seattle Storm.