Kershaw Gets Call For “Must-Win” – Series Now Best of 3. 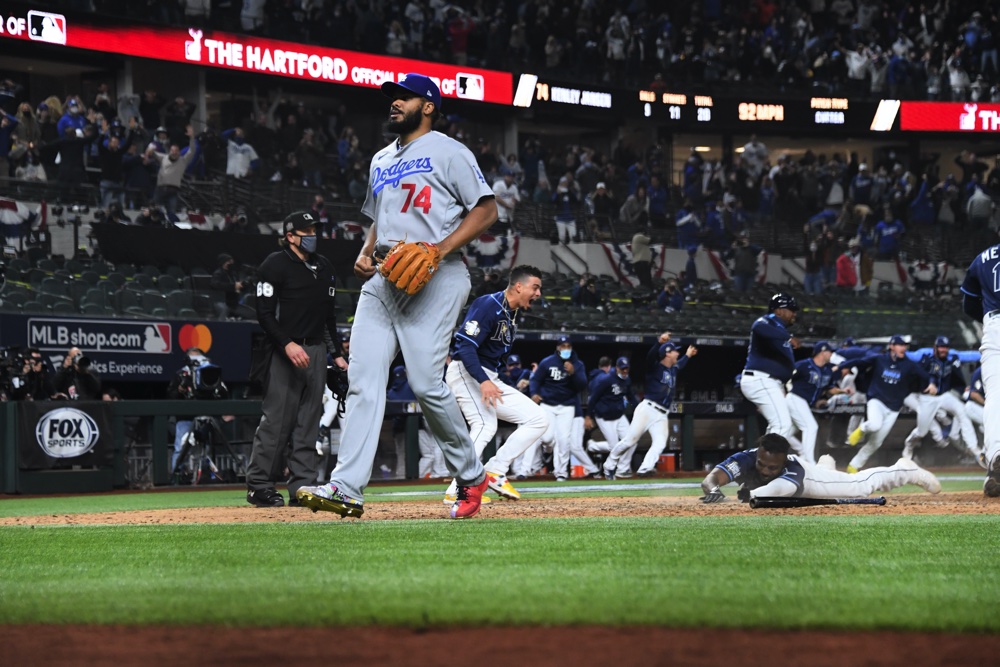 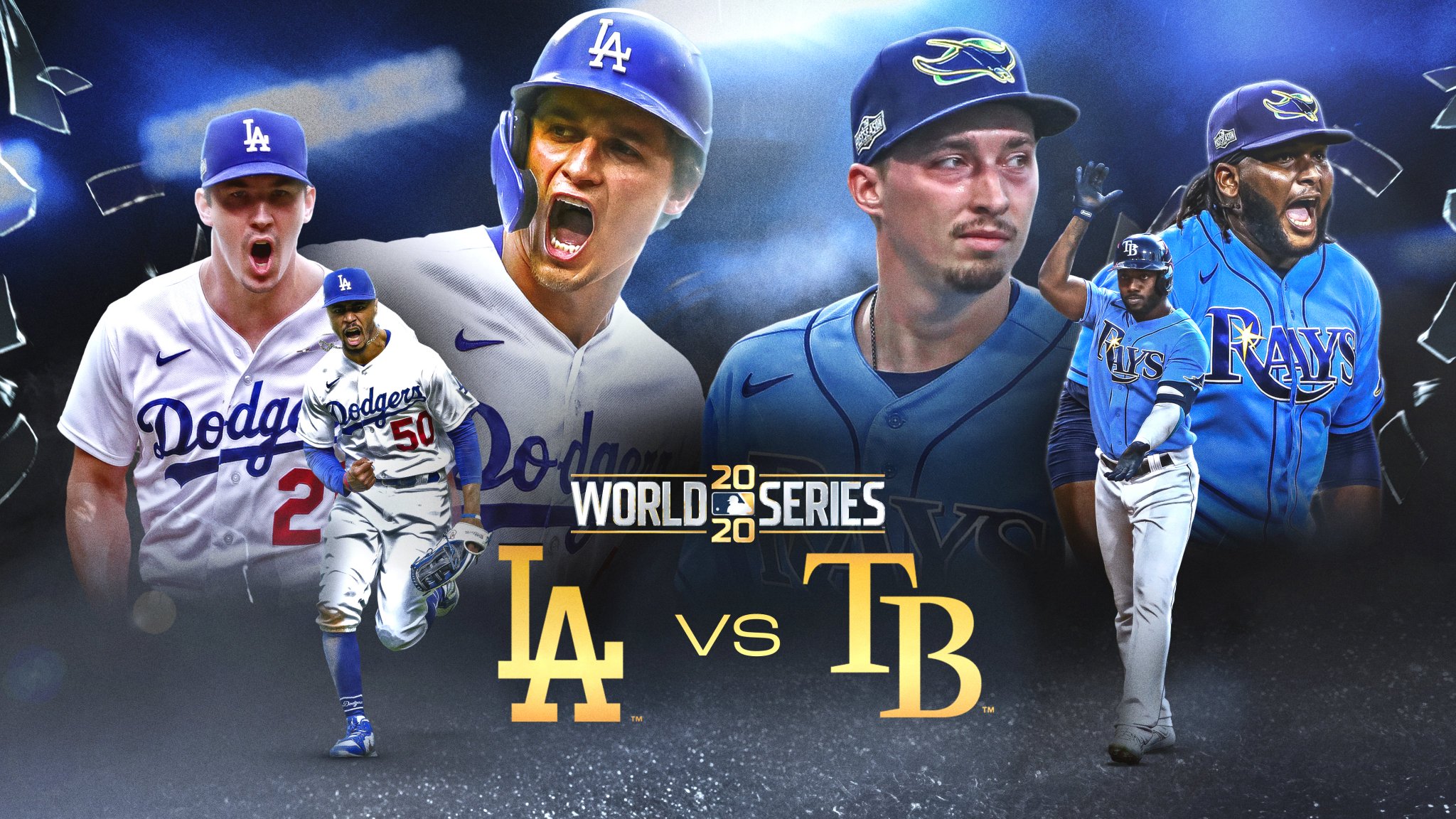 (East Los Angeles, CA) October 25, 2020 [From The Editor’s Desk]: The stage was set for another pivotal and crucial 2020 World Series Game 4, this past Saturday, 10/24. With the Dodgers ahead (2-1) in this Fall Classic, they were obviously thinking of Win #3, and using the eventual Game 5 to close the Tampa Bay Rays out, set for Sunday, Oct. 25th. However, who could have ever predicted what would happen in one of the most dramatic, wildest, and craziest finishes ever in the World Series. Stay with us we take you back into a most memorable baseball game. To follow the Dodgers on the internet, click here. 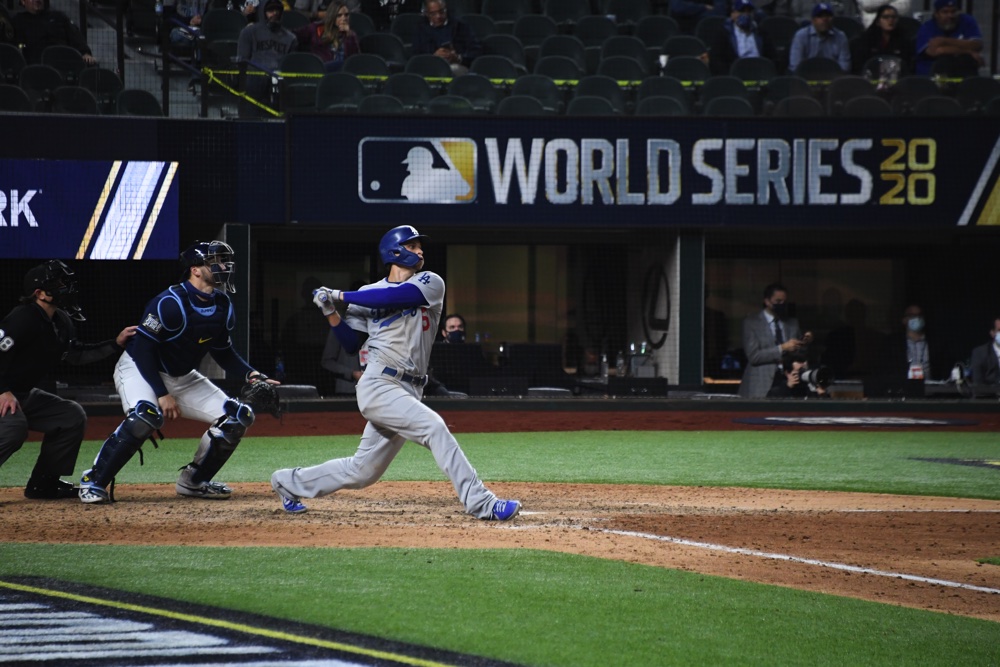 ARLINGTON, TX – OCTOBER 24: Corey Seager #5 of the Los Angeles Dodgers hitting an RBI single to score Chris Taylor #3 for a tie-breaking go-ahead run during the eighth inning of game four of the World Series against the Tampa Bay Rays at Globe Life Field on Saturday, October 24, 2020 in Arlington, Texas. (Jon SooHoo/Los Angeles Dodgers)

(Game #4 Summary): The Dodgers, designated as the official visiting team, brought more explosiveness  in their first at-bats, with Justin Turner doing the damage, repeating his same “at-bat” scenario from Game 3, Deja Vu, the good kind, thus becoming the newest World Series record-setter. He is now the only player in World Series history to start the scoring off with a homer in “back-to-back” 1st innings. Dodgers 1  Rays 0. In the bottom of the 1st, Julio Urías pitched to 4 batters in the frame, and although he surrendered a single to Randy Arozarena, he was eventually erased on an inning-ending double play.

The Dodgers failed to score in the 2nd. In the 3rd, the Big Blue Wrecking Crew lived up to its name when Corey Seager hit a rocket into the right field upper deck, moving the score to (2-0). In the Rays 4th inning, “El Cubano,” Randy Arozarena tagged an Urías pitch for a lead-off homer for their first run, (2-1) Dodgers. The Rays 5th inning “at-bats” were a bit rocky for Urías, as he gave up a solo HR to Hunter Renfroe, closing the lead to (3-2). Dodgers skipper Dave Roberts, then decided to pull hm after going 4 2/3 frames. Urias left with the lead. Then, reliever Blake Treinen went unstable by giving up a hit to Arozarena, and a walk to Mike Brosseau, (replaced by Ji-Man Choi as a pinch-runner) leaving them on base for the dangerous Brandon Lowe. Roberts then changed pitchers and brought in Pedro Báez to try and get the side out. Lowe then went opposite field for his 3-run HR and a (5-4) lead. Báez got out of  the inning by retiring the next two batters. 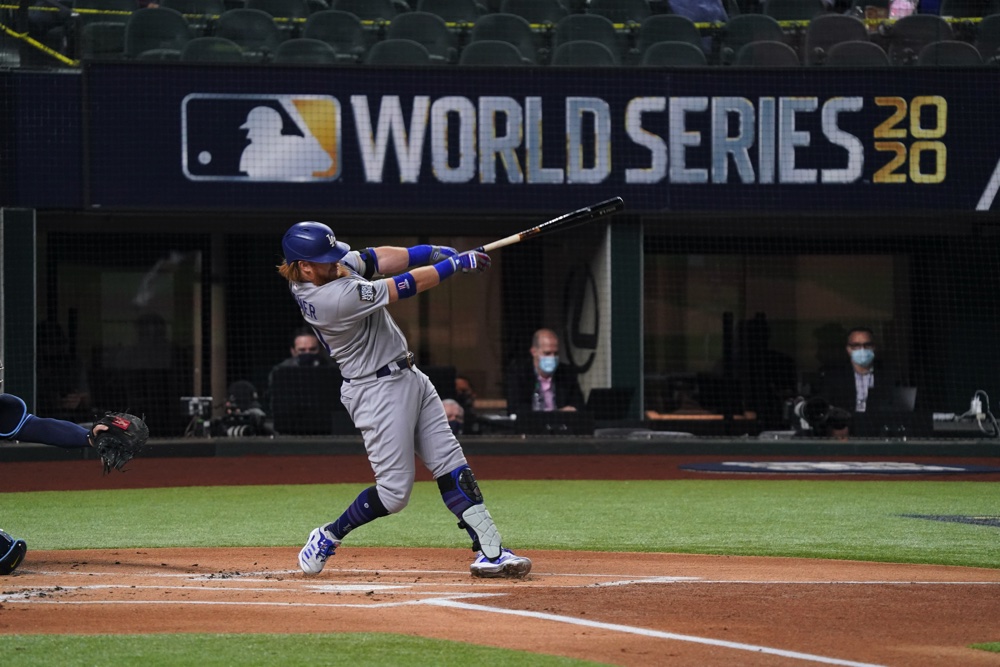 In the top  of the 7th, the Rays brought in their closer, Diego Castillo to face Will Smith, who walked, then he struck out Cody Bellinger, in the line-up as the DH. After an AJ Pollock “at-bat,” Chris Taylor, then lined out to left making it 2-outs once again. This time it was Kiké Hernández who came up and lashed a hard bouncing single past 3b for an RBI, giving the Blue Crew a (6-5) lead. This was the 54th run scored under those conditions. Next hitter up was Mookie Betts, (o-3) in trips to the plate at that time, who flied out to end the stanza.

The Rays brought in Aaron Loup to begin the 7th. Corey Seager led off with a sharp rolling single to right. Justin Turner then used his magic wood to drive a hard single to left, moving Seager to 3rd. Turner smartly advance himself to 2nd with no outs, Muncy was sat down on a strike-out. This brought another Kevin Cash pitching change with Nick Anderson coming in to relieve. He faced Will Smith and struck him out, 2 down. Cody Bellnger was then intentionally walked to load the bases for the pinch-hitting Joc Pedersen. With the biggest hit of his Dodger career, he delivered a base hit off the glove of the shifted Brandon Lowe, into right, getting credit for 2 RBIs. But, Cody Bellinger who was given the green light to advance to 3rd was cut down by a great throw from rightfielder Austin Meadows to end the inning. The Dodgers re-took the lead on that play for a (6-5) lead.

Báez was left in to start the 7th. He immediately gave up another HR, this time to Kevin Kiermaier, who drove it deep into the right field stands. The Dodgers managed to get the side out and deny any further damage. Score now tied at (6-6).

Top of the 8th, the drama is led-off with Chris Taylor driving a double into left-center. Then after a strike-out and a ground-out by Mookie, it was again 2-outs with a man on base. Stepping in with a 3-4 night, Corey Seager once more drove in the leading run with a single, making it (7-6) Dodgers, while recording their 57th “2-out run” scored in the Series. Then, Justin Turner kept the rally alive with a sharp single to left. However, Muncy came up and grounded out to 2nd to end the rally and the inning.

To start the 8th, a very confident Roberts sent in their lefty 3/4-submarine pitcher, Adam Kolarek to face the Rays’ middle of their batting order. He did his job nicely, only giving up a walk to Choi, while striking out 2 of 3, including Lowe. This brought Roberts out of the dugout and he waived his right arm for Brusdar Graterol to enter the game. Graterol was easily seen wearing his Kobe Bryant specially made spikes as he strode towards the mound. He gave up a flare single to left by Willy Adames, putting runners on 1st & 2nd. But, he then got Lowe to fly out to Mookie Betts to end the frame.

Now, it was closing time for Guess Who? to appear and close the Rays out..none other than #74 Kenley Jansen. He struck out the first batter/pinch-hitter, Yoshi Tsutsugo. Kevin Kiermaier then blooped a “broken bat” flare into right. Joey Wendle then lashed a liner to Pedersen for out #2, Now, with 2-out and 1-on, Arozarena drew a key base-on-balls. Then pinch hitter Brett Phillips, at-bat for only the first time in 9 games, got his bat on a pitch and singled to right center. However, CF/Chris Taylor didn’t cleanly field the ball and it kicked off his glove and to his left. This allowed both runners to advance and Kiermaier to score, tying the game. To somewhat make up for the error, Taylor did manage to throw a perfect strike to his cut-off man, 1B Max Muncy, who then made the bullet throw to home plate. But, Will Smith, pulled away a fraction of a second too early to make the secured grab and then make the tag on Arozarena, who had already been waved home. After stumbling then flipping over on his approach, he completely fell to the base-path some 15′ from home plate, and would easily have been the third out if Smith had possession of the ball. But there was no way that he would turn back after seeing that the throw had been booted by Smith, had kicked away to the right, and it was nowhere to be found. He then dived in arms and chest first to score the winning run. He then jubilantly tapped home plate vigorously at least 5 times, exerting exclamation points in victory.

The official scorer ruled an E-8 (error) on Taylor, but it was my opinion that more traditional scorers would have also assessed an error on Smith. The Rays then joyfully and triumphantly circled around the infield as they tried to catch up to their hero Brett Phillips who was happily running around in circles with his arms spread out in eagle-like fashion. The “walk-off” rally was complete and quite remarkably successful!

(“Classic” Thoughts): Officially, the roller-coaster skyscraper dives and extreme-banked turns, plus the dramatic style of this game kept it going for 4 hours/15 minutes, but it was a “Classic” game nonetheless, definitely within the Fall Classic guidelines. What more could baseball fans want, even in the midst of this horrible and deadly COVID-19 misery. Experts and fans alike are already calling it one of the most dramatic and craziest-ending World Series games ever played, even comparing it to a typical play that’s seen in Little League or sandlot baseball.

(Editor’s Thoughts): First, if catcher, Will Smith would have thrown off his mask, he could possibly have had a better view and understanding of the “craziest play ever” that he would forever be remembered for. Secondly, and who knows, if there had been NO grievous miscues by the Dodgers on that play, the game could have possibly lasted another 2 or 3 extra innings. But as I mentioned in my first article of Games 1 & 2, “this is why they have to play the game.”  Gladly there are three more games, turning the Series into the Best of 3. The winner has an overnight to enjoy this, just as the loser has the night to forget it ever happened. Now, it’s on to Game 5 in a repeat of starting pitchers, Clayton Kershaw (0-1) going against his Game 1 opponent, Tyler Glasnow, (0-1).