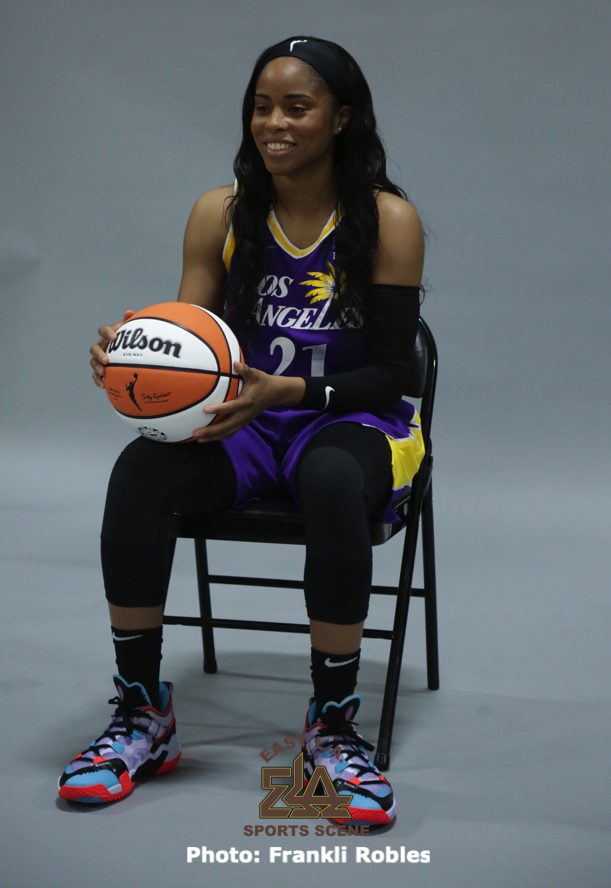 #21 Jordin Canada, the UCLA alum, is pictured during the Sparks Media Day last week. She was the "Player of the Game" in her first appearance as the Los Angeles Sparks' point guard. She was quite impressive in her debut game as her stats show, (21) points, (9-9) free-throws, (8) assists, (4) rebounds, and (2) steals in the (98-91) Overtime victory against the Chicago Sky. Her brilliance at the free throw line was on display as she calmly sank three consecutive free throws in regulation time after being fouled on her 3 pointer to tie the game with (00:1.5) seconds left. In OT, she made four more in a row along with 2 field goals to clinch the win. The Sparks play the Indiana Fever at 12:00 tomorrow. Photo: Frankli Robles

(East Los Angeles, CA) May 7, 2022 [From The Editor’s Desk]: …’And the ball is tipped to, and controlled by the Los Angeles Sparks,’ as “play-by-play” announcer, Rahshaun Haylock would broadcast in game one. With that traditional “jump ball” play to start the WNBA’s 26th season of play, the Sparks were underway as visitors in the home of the defending World Champions, the Chicago Sky.

[1st Half]: In a very interesting and entertaining opening half of a competitive game, both teams went after each other in their own skilled ways. Taking the lead first were the Sky with former Sparks MVP, Candace “CP3” Parker, pouring in (8) of her team’s first (12) points. Keep in mind that Nneka Ogwumike made the first basket of the game on a nice turnaround 5′ jump shot from the right side of the key. But the Sky toned it down over the next few minutes and by the (5:00) minute mark, the Sparks had pulled closer and ended losing the 1st period by (25-24).

Then in the 2nd quarter the Sparks found their rhythm and stepped on the gas, and by the (1:00) minute mark, they had taken a 3 point lead at the half. Leading the offense was veteran power forward, N. Ogwumike with (15) points while Lexi Brown (on 2 three-pointers), and Rookie guard, Chennedy Carter scored (6) each.

[2nd Half]: The 3rd quarter was won by the Sky as they broke quickly from the gate and took the lead back. The game then began to swing back and forth as both Coaches were using a lot of their reserve players to get the new season “jitters” out of their systems. The typical opening games feature lots of turnovers and it was certainly true of this match-up. It dictated the rhythm of the game and fortunately for the Sparks it worked to their advantage.  The home team took this period by (30-24). The Sky’s Candace Parker and Dana Evans had a huge period with (10) and (17) points respectively to their credit. Liz Cambage was key as she scored (5) highly valued points.

Then it was time for the WNBA to be put on notice by #21/Jordin Canada, as she stepped onto center stage. As time wound down in the 4th quarter, and the Sky with the lead, an amazing collapse by the home team allowed the Sparks to remain alive and threatening to tie the game, with just seconds remaining. Here’s how we recall viewing it on SpectrumSportsNet. After a huge turnover on an inbound pass by the Sky with (:06.5) seconds left, the Sparks, trailing by 3, were awarded the ball and it was passed inbounds to Canada to get up court and take the last shot. She did, and missed, but was fouled in the act of shooting at the 3-point line directly facing the basket with just (:01.5) seconds left. She cooly and calmly sank all three to tie the game at (88-88). The Sky was unable to get off a final shot as Parker turned the ball over ending the game in regulation time.

[OVERTIME]: The start of the (5:00) minute Overtime period was quite favorable to the Sparks and they took advantage of it with Canada scoring the first 5 points with no clear reply to their new-found energy. After several key Timeouts called by Coach Fisher, the Sparks tightened up on defense only allowing a tying lay-up by Courtney Vandersloot and 1 free-throw by Dana Evans.  Meanwhile, Canada was busy getting fouled on several occasions and continued with her incredible hot streak of making “clutch free” throws as the Sparks stretched their lead to (7) with only (00:27.5) seconds left.  Canada dropped in (8) of the Sparks (10) overtime points, while N. Ogwunike scored the 10th point of the OT.

Here is a highlight sheet issued by the Sparks Public Relations Department: