Team Not Yet In Sync During Home Opener At L.A. Convention Center 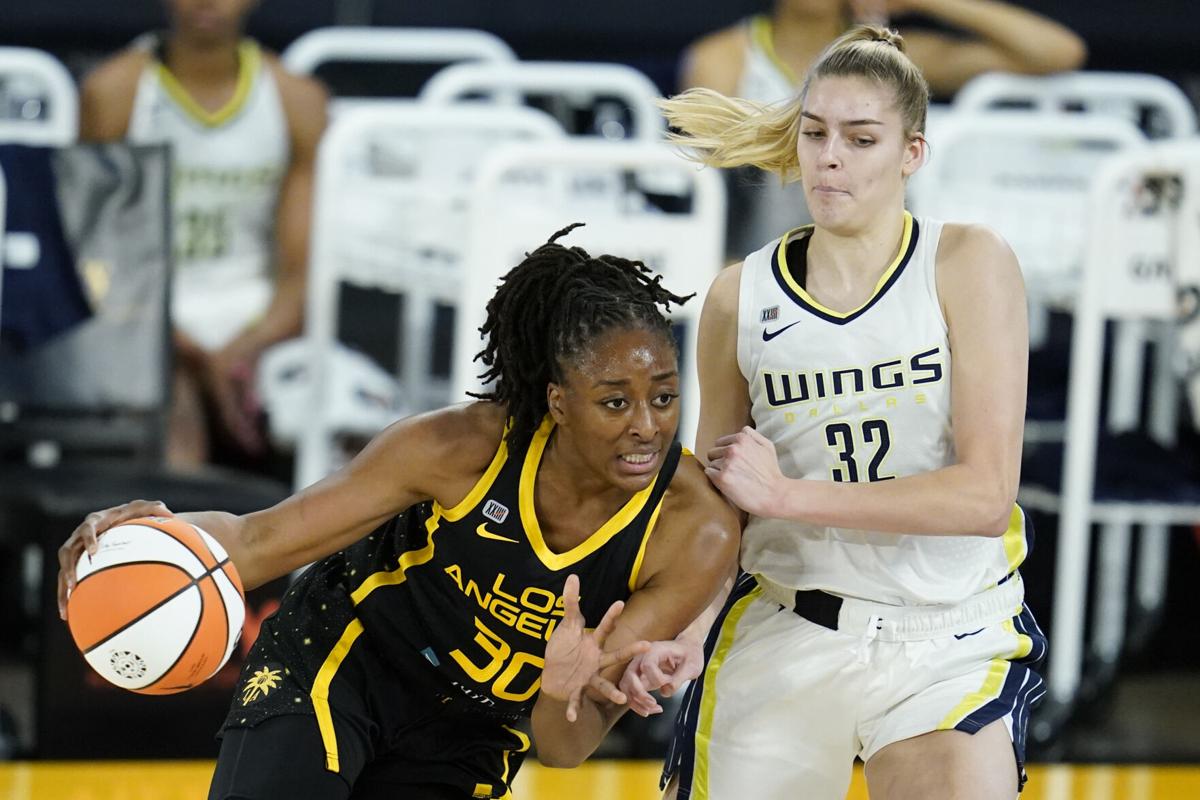 (East Los Angeles, CA) May 19, 2021 [From The Editor’s Desk]: The “new-look” L.A. Sparks opened their new 2021 season at an unfamiliar home court this past weekend. Although they are technically and physically at home, it is only in the sense of walking up the block to play in another venue. This one being the massive and yet innovative, L.A. Convention Center. In recent memory, the last time basketball of any kind was associated here was during the February, 2018 NBA All-Star game, which utilized the vast convention center’s space for an overwhelming, and a very worthwhile, NBA Fan Experience venue.

But so much for the great memories for NBA Angeleno fans and the past..now it’s time for the much-awaited return of one of the WNBA’s premier teams, the Sparks, in their bid to play a full, and “near-normal” season, eventually to be completed with the “in-person” game-day attendance of thousands of their adoring fans and all of the attributes that make our city’s women’s pro team recipients of one of the best fan-bases in basketball. This game marked the recognition of the inaugural WNBA’s Commissioner’s Cup game. 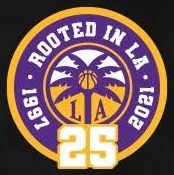 (Game Preview): The Dallas Wings were the first team to visit the temporary, but new home of the Sparks, and they brought their “A” game with them in the persons of the 4th year veteran and super-talented 6-0 small forward, Allisha Gray; the #1 overall pick in the WNBA draft, 6-5 F-C/Charli Collier; the tremendous point-guard play of 3rd year player, Arike Ogunbowale; the former Sparks player and Notre Dame alum, Marina Mabrey; the 6-3 offensive-minded Forward Isabelle Harrison; and lastly, 6-1 rebounding machine, Forward and 6th year veteran, Kayla Thornton.

On the other hand, the Sparks suited up in what looked like an entirely brand new team, except for the Ogwumike Sisters, Nneka and Chiney, plus Kristi Toliver. Rounding out the starting five were: perimeter guard, 5-9, Brittney Sykes, 5th year, Syracuse; and point guard, Erica Wheeler, Rutgers, the 5th year, undrafted free agent and 2019 All-Star Game MVP. However, badly missing was the rising, young WNBA star, Chelsea Gray, who signed as a free agent with the Las Vegas Aces, plus one of the current legends of WNBA basketball, and a guaranteed Hall of Fame inductee, Candace “CP3” Parker, now a happy member of the Chicago Sky. 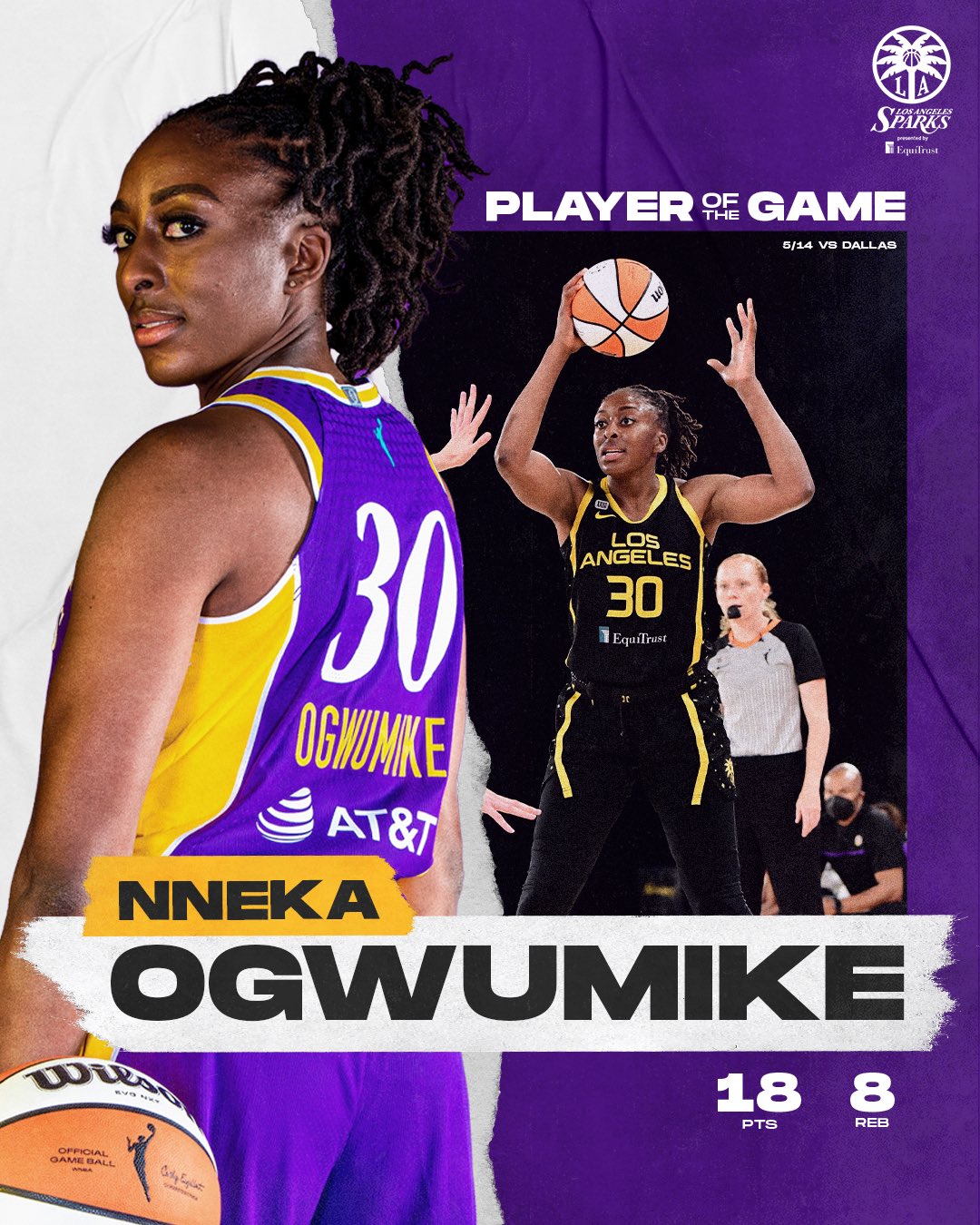 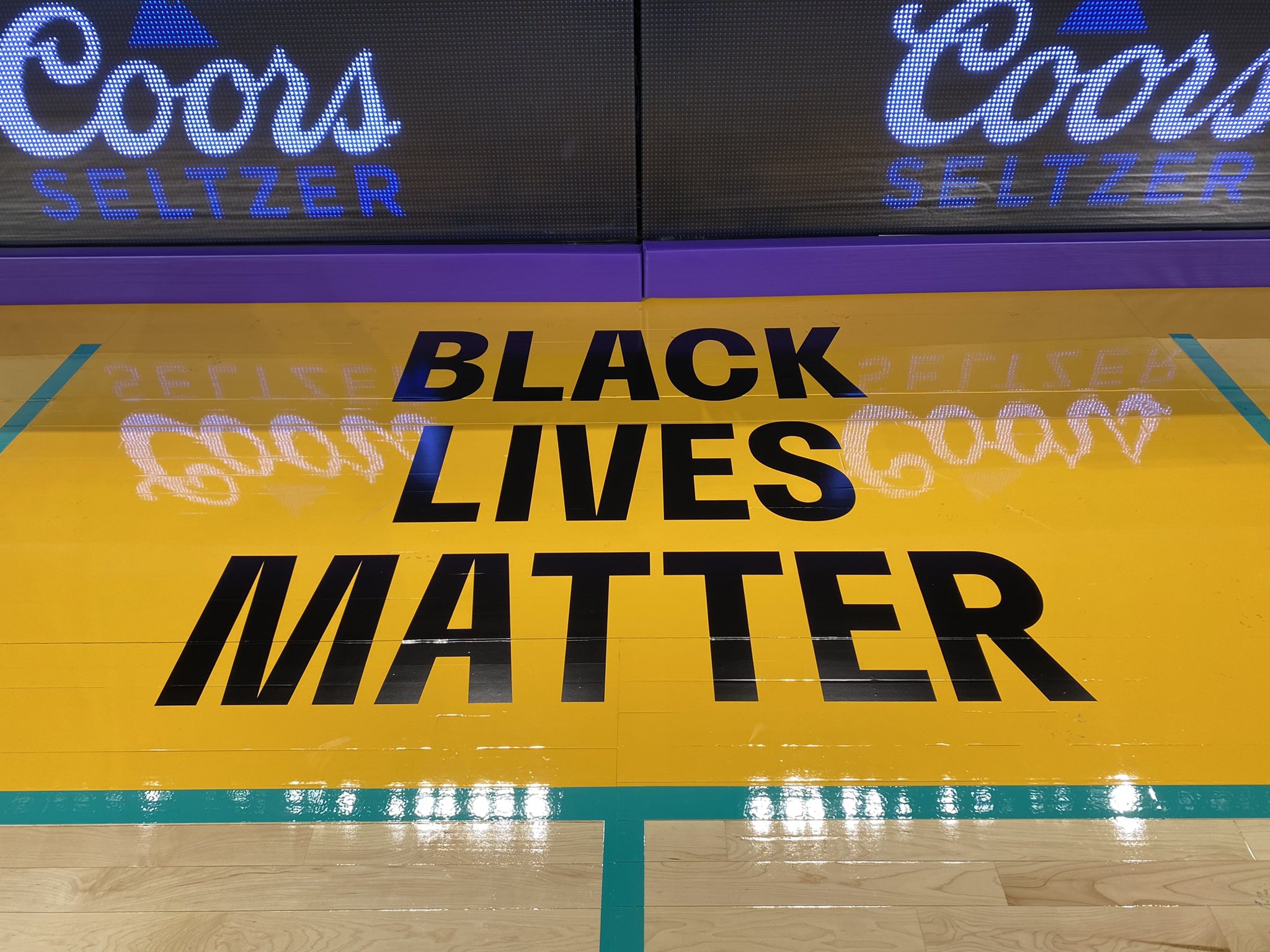 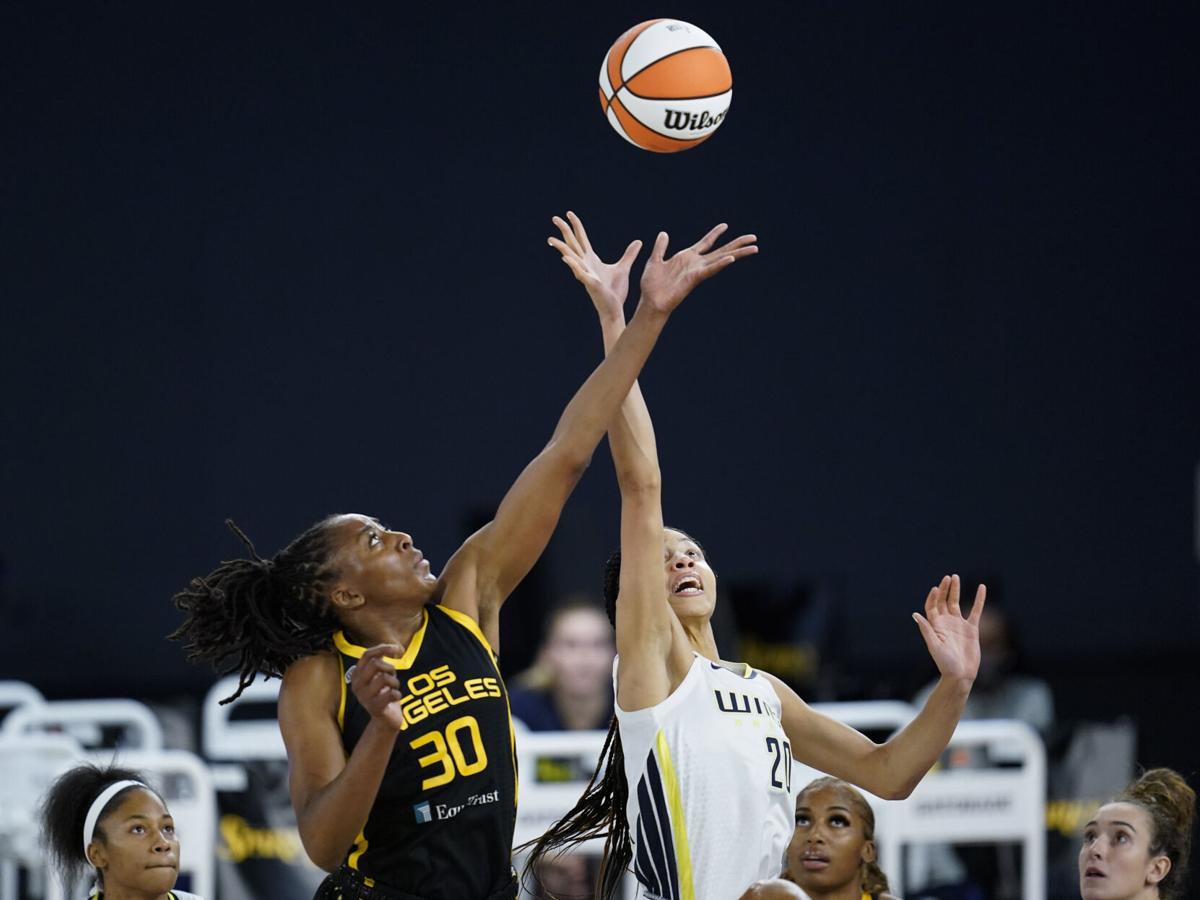 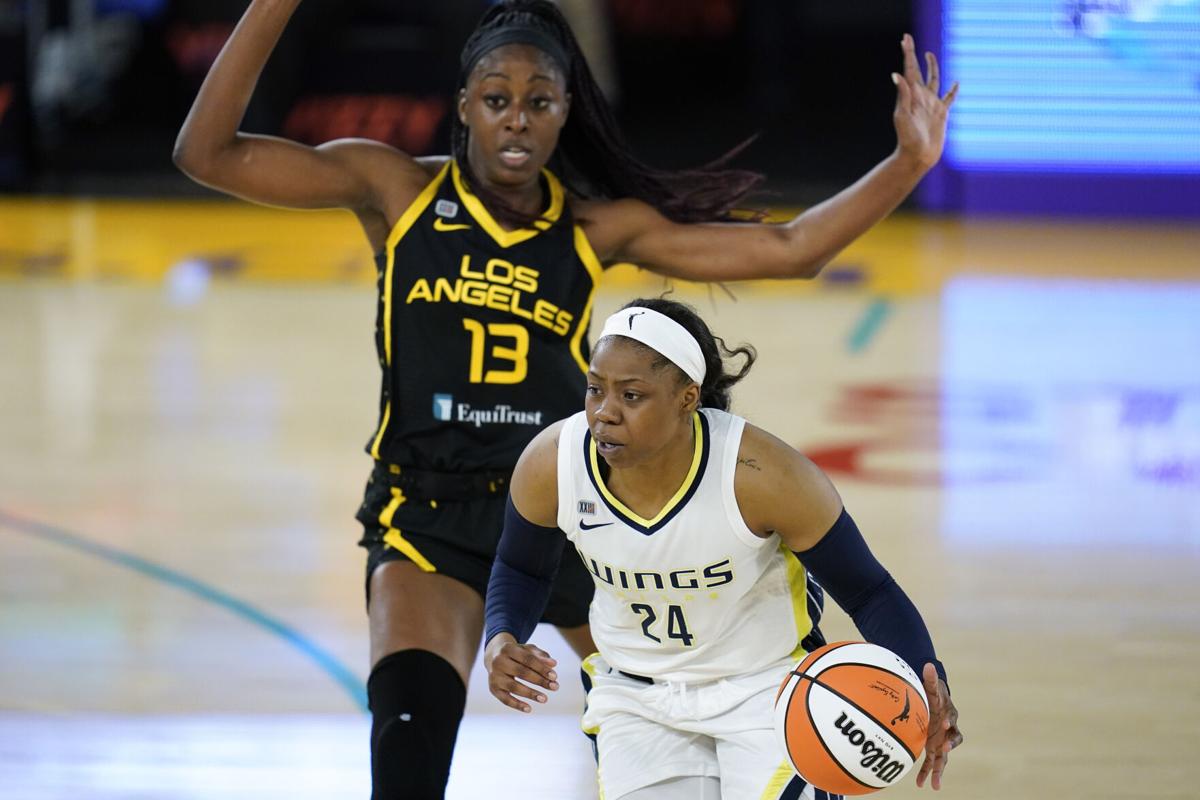 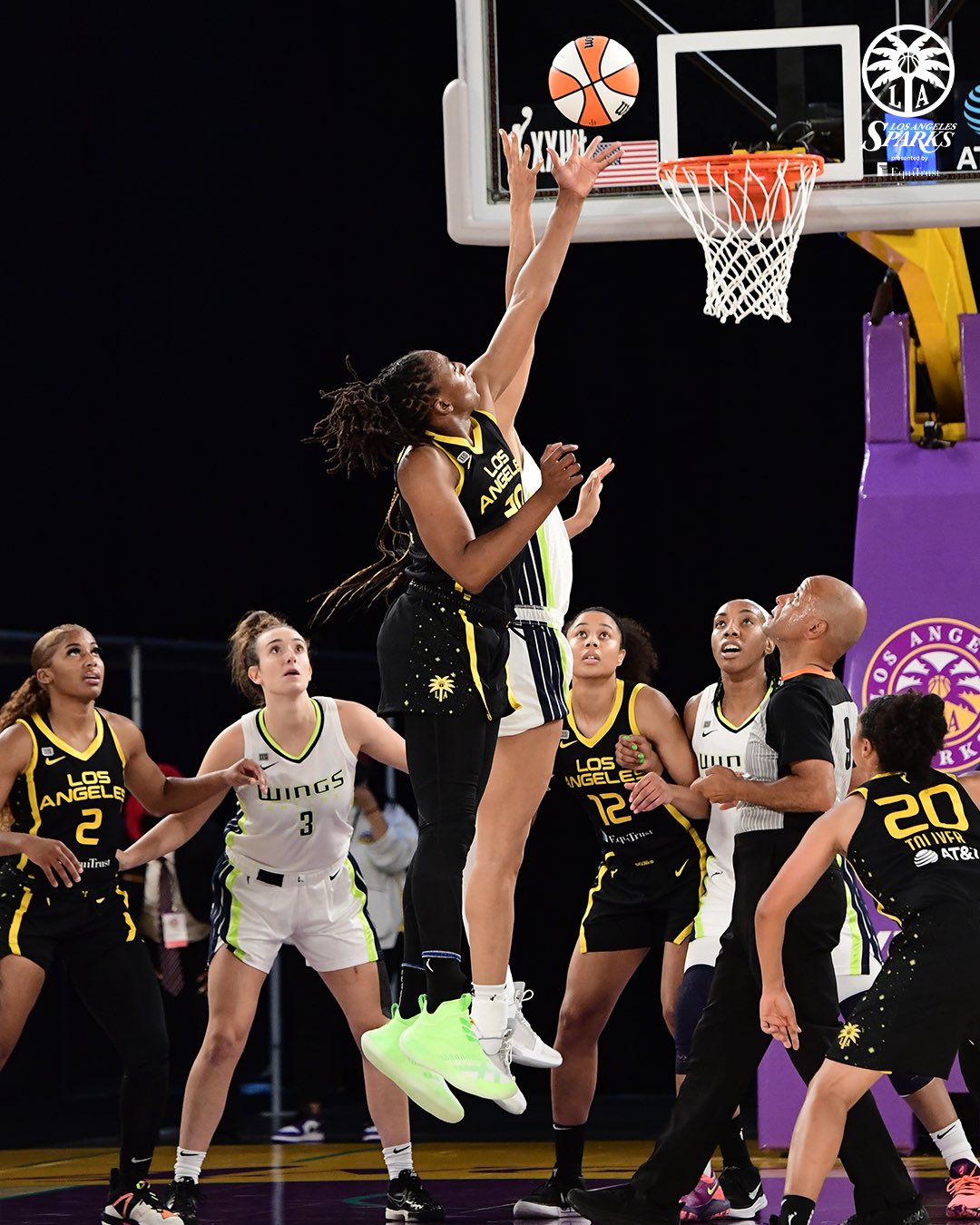 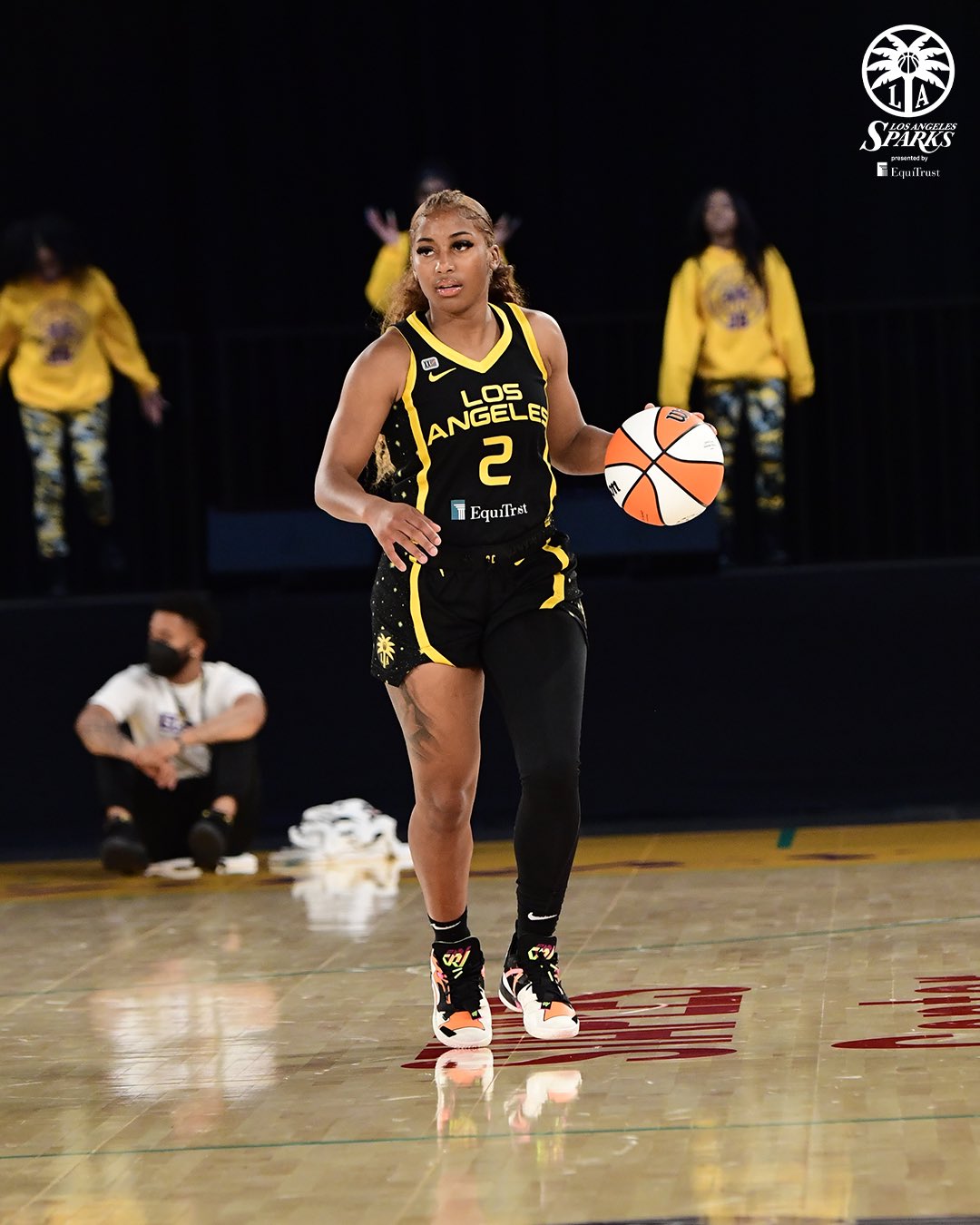 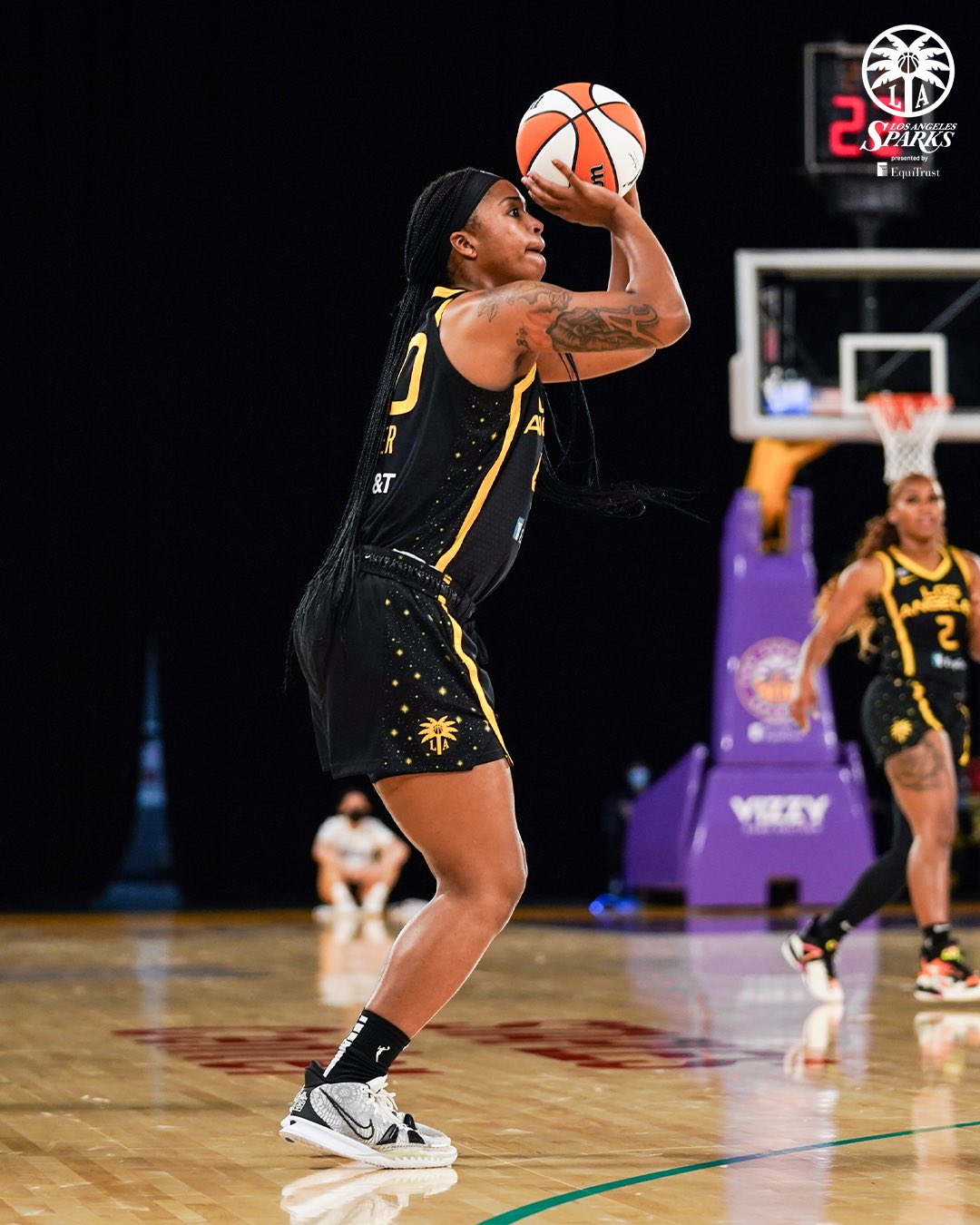 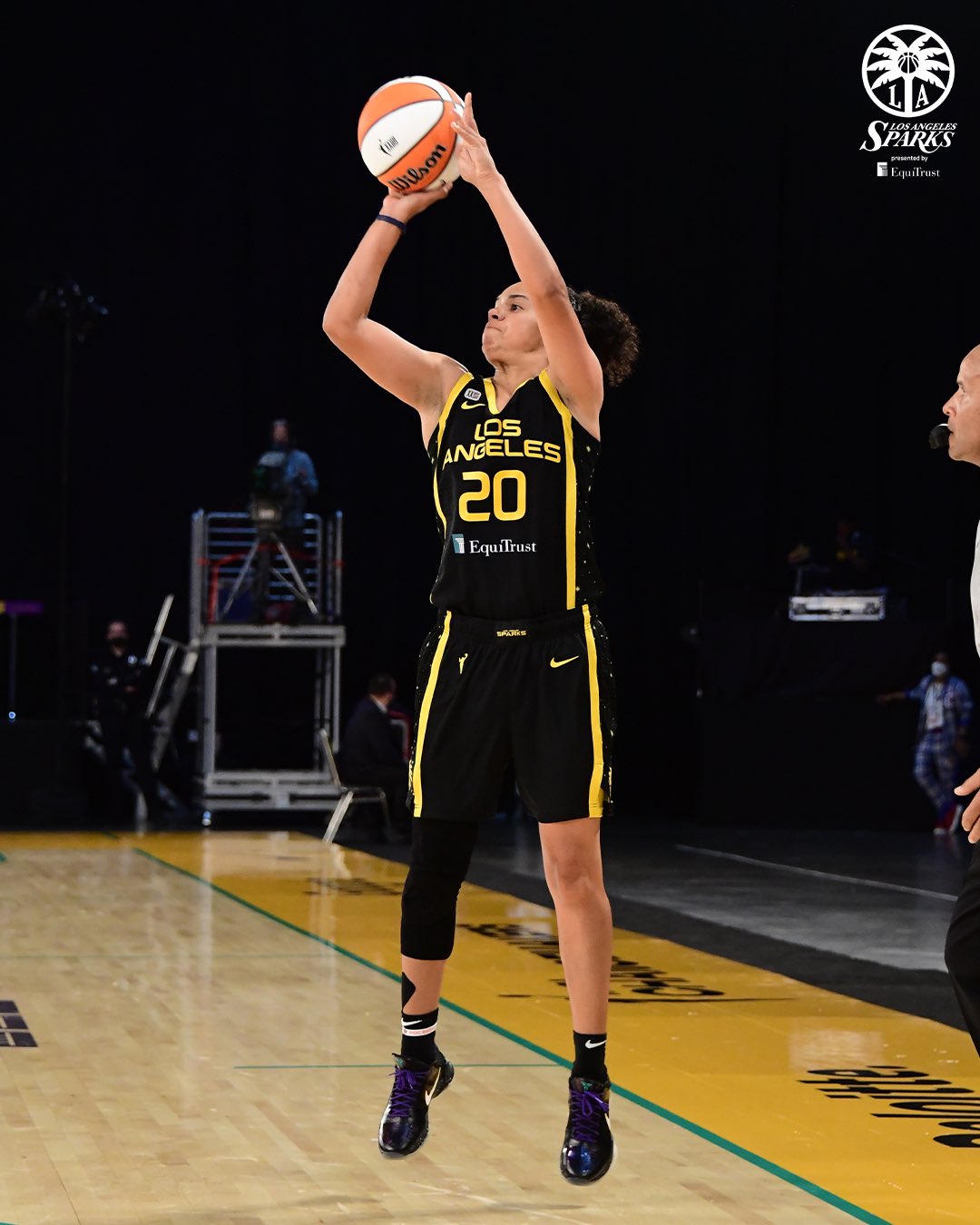 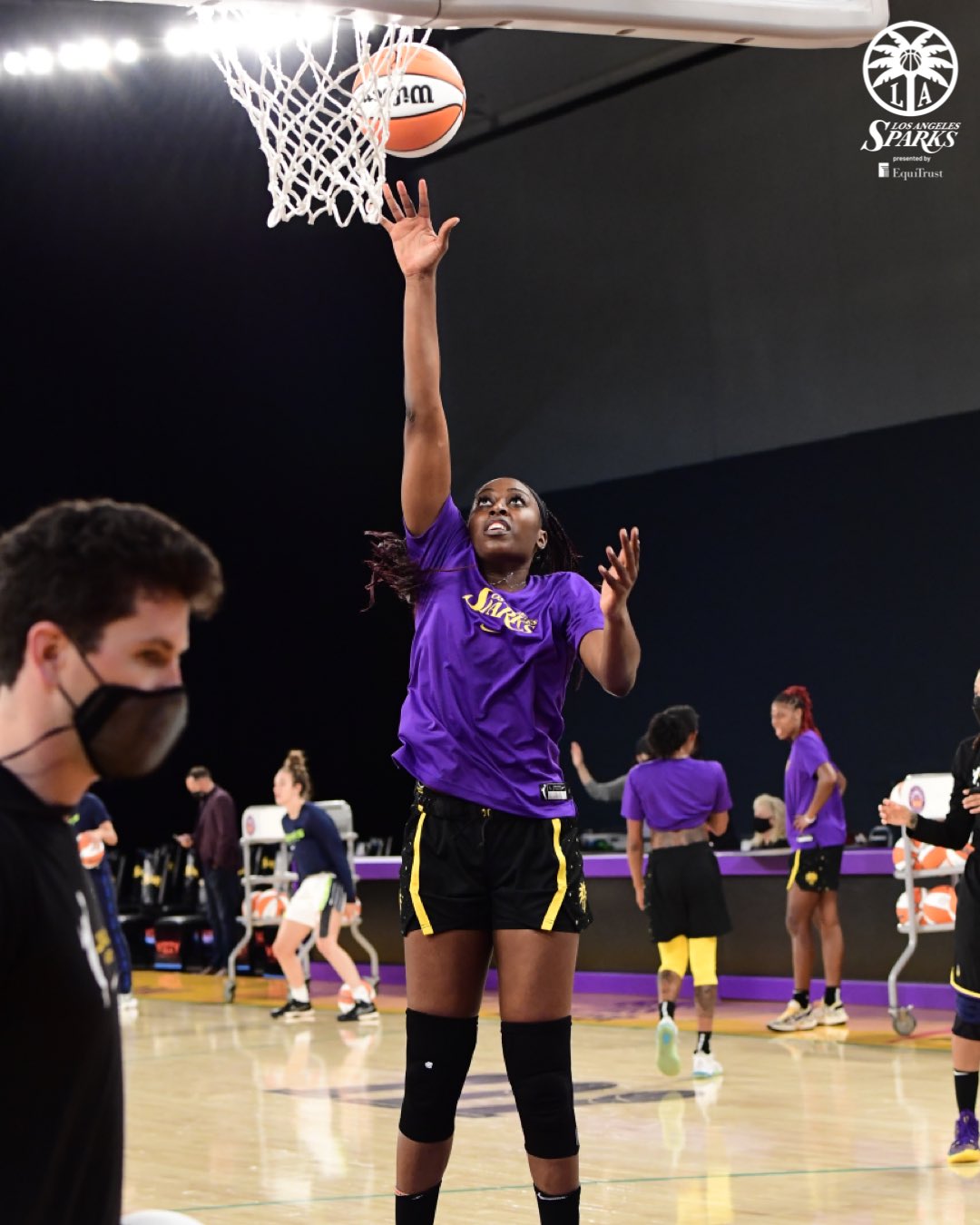 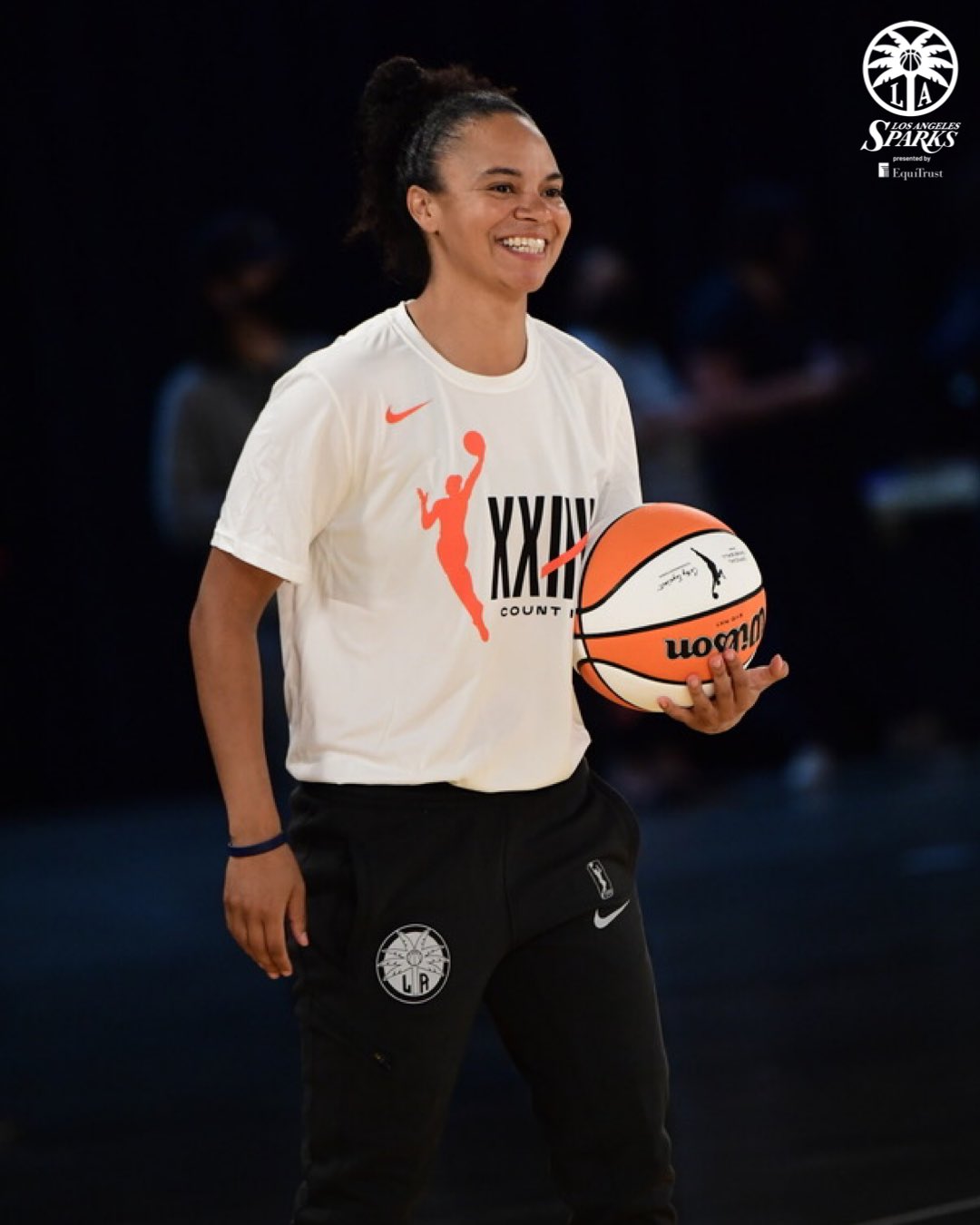 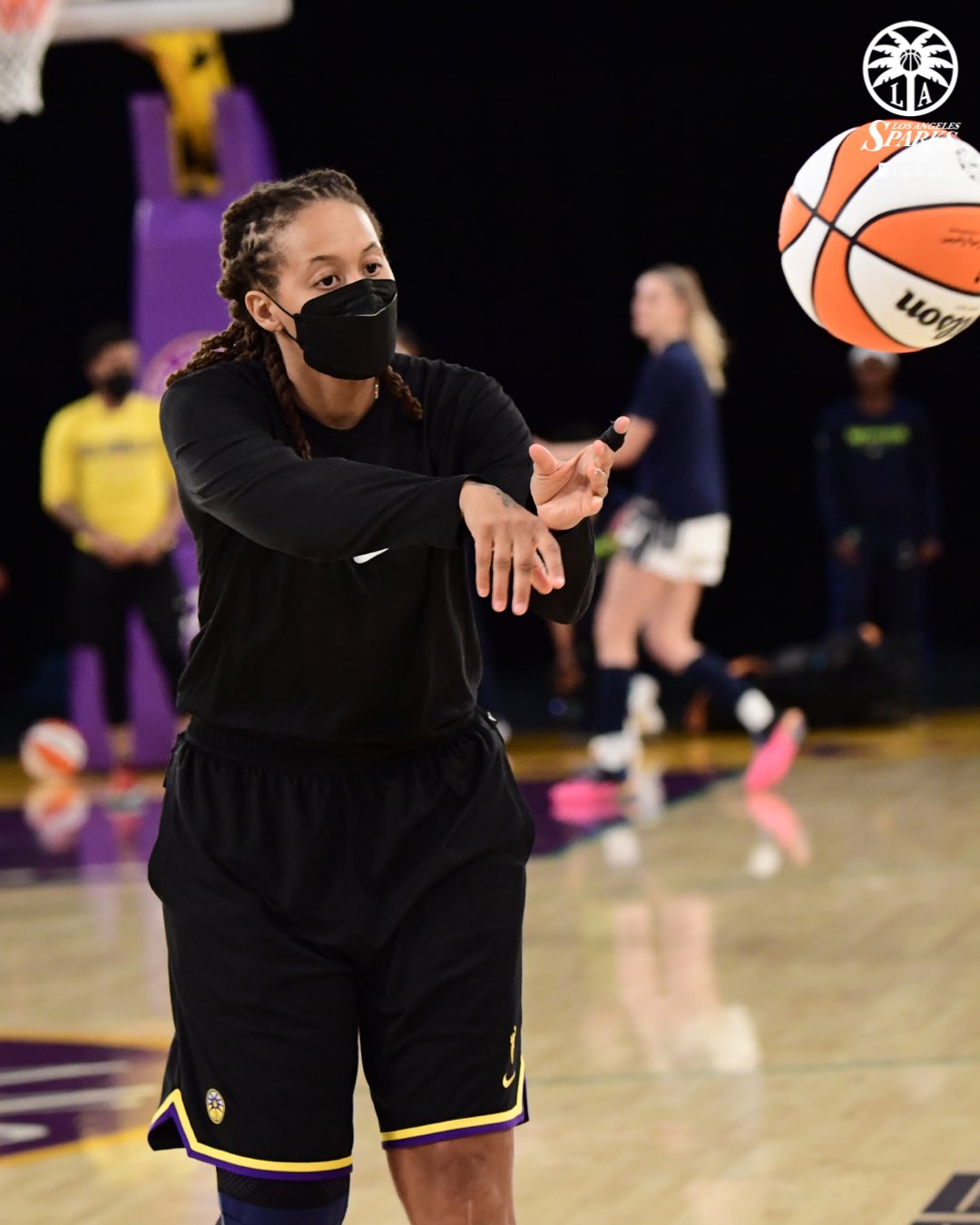 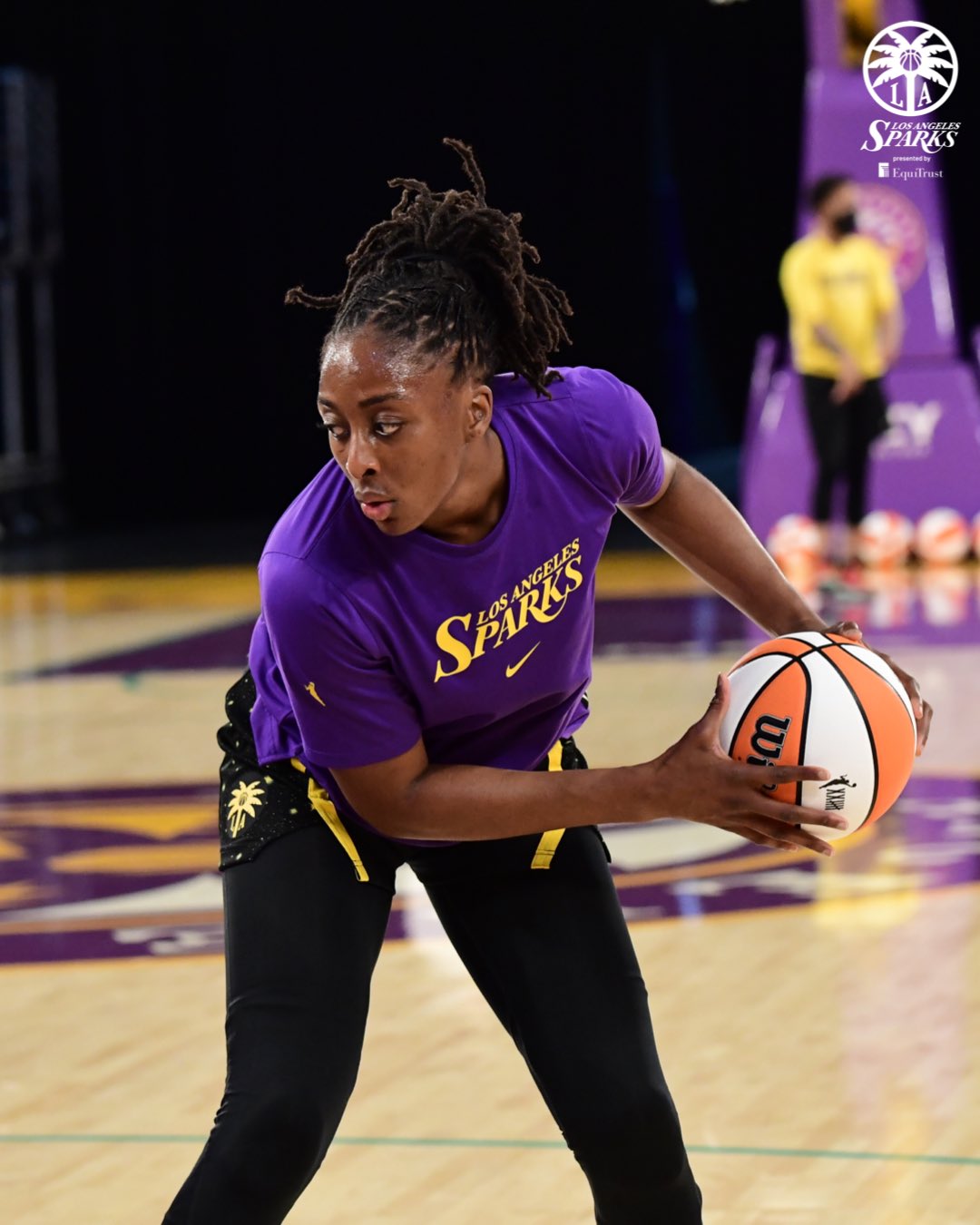 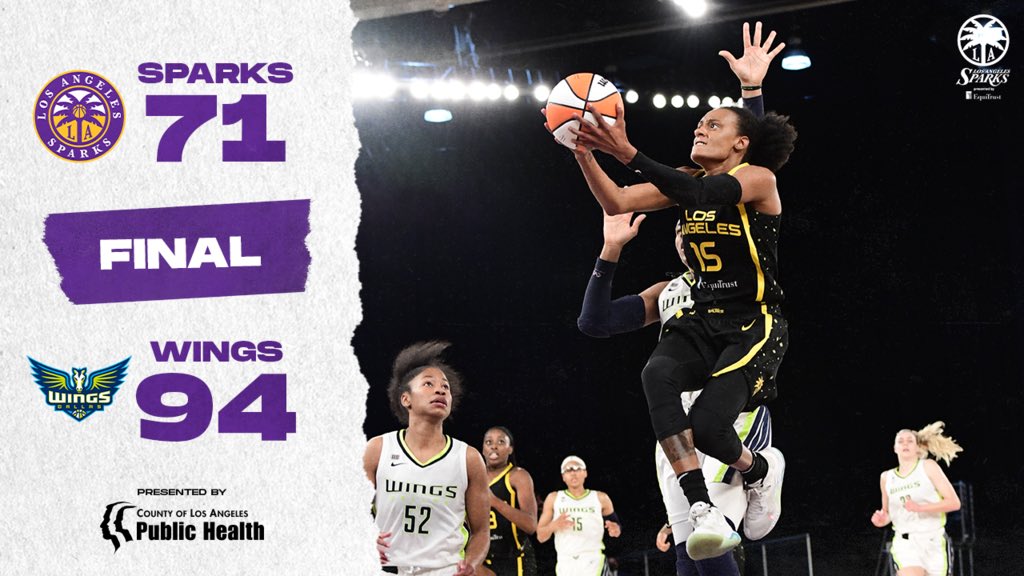 (Game Summary): [1st Half]: The Sparks came out pretty impressive and built up a (27-20) lead to take the 1st period. Leading the “new” way were the Sisters Ogwumike, Nneka and Chiney. Add Kristi Toliver and there was the bulk of the scoring. In the 2nd quarter, Dallas took control during their (24-14) second period, and led (44-41) at the break behind (15) points from Gray. The Wings’ defense apparently bothered Coach Derek Fisher’s offense as evidenced by the consistent amount of turnovers shown by his team. At the same time, the Wings were unselfishly turning the ball over at an even more rapid pace as the Sparks, but fortunately for them, they did not produce scores on each of the possessions gained. On offense, the Sparks scored only (14) points in the period.

[2nd Half]: Ogunbowale, the League’s leading scorer last season, a 3rd year pro, and Notre Dame grad, scored (10) points in the 3rd quarter to help build the Wings a (70-60) lead. And because of their defense coupled with the Sparks poor shooting percentage at the free throw line (57.1%) and from 3-point range, (25.9%) for the game, the Wings would never look back over their shoulders as they ballooned the lead to 20+ into the 4th period. They scored an even (50) points compared to the Sparks’ (30) in the second half. End of story.

(Game Stat-Lines): For the Sparks, they were led by their franchise player, Nneka Ogwumike with (18 pts), along with (8) rebounds in (26) minutes of play. She was followed by her sister, Chiney, posting these numbers in her return to WNBA action- (12 pts/6 rebounds/1 steal/2 assists). Back from her COVID-19 “opt-out” season and her NBA assistant coaching stint, sharpshooter, Kristi Toliver had (11 pts/2 assists/1 steal) with (2) 3-pointers to her credit. 6-1/Forward/Nia Coffey made most of her minutes as a reserve and chipped in with a (10) point and (2) blocked shots effort in (19) minutes of playing time. Starters Brittney Sykes and Erica Wheeler combined for a total of (10) points, credited with (6) and (4) respectively. Sykes also had an excellent floor game adding (2 rebounds/3 assists/2 steals and 1 blocked shot) to her totals.

For Dallas, super-talented, Allisha Gray scored (23) points and took (9) rebounds, while their #1 overall pick Charli Collier, (Univ. of Texas), had (11 pts) and (10) rebounds (her 1st double-double), while going 4 for 6 from the field, in her Wings debut. Starter and deluxe point guard, Arike Ogunbowale added (17) points, former Sparks player, Marina Mabrey, who provided fire-power off the bench, had (11) and Isabelle Harrison, her ankle injury fully recovered, and now healthy with (10). Not to overlook her presence, there was the huge effort from Kayla Thornton who led all rebounders with (11). The last, but the most important stat to note, was that the Wings shot an incredible 53.1% from the field, 88.1% from the free throw line, and 47.1% from the 3 point line. The win marked Head Coach, Vickie Johnson (Louisiana Tech), first as the Wings newest Head Coach.

(Game Quotes): Derek Fisher: [On the loss of the game (turnovers)]: “I think we should have been able to capitalize on those a little bit more. But, part of that is the work that we still have to do. We’ve got to be able to quickly change from defense to offense and be able to score. We missed some easy convertible opportunities. Overall, defensively as the game went on we got worse. We definitely need to improve, especially by the time we get to Las Vegas.”

(Of Significance): Leave no doubt that GM/Coach Derek Fisher and his coaching staff will be working around-the-clock to re-assure the team’s fanbase that everything is under control and that things will be getting better sooner, rather than much later. 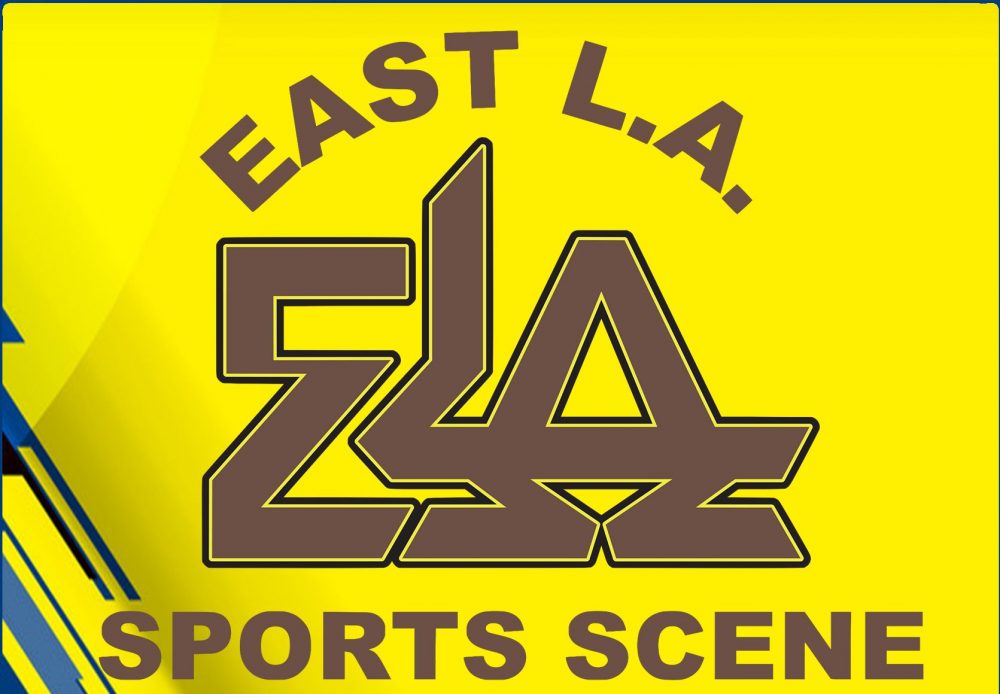