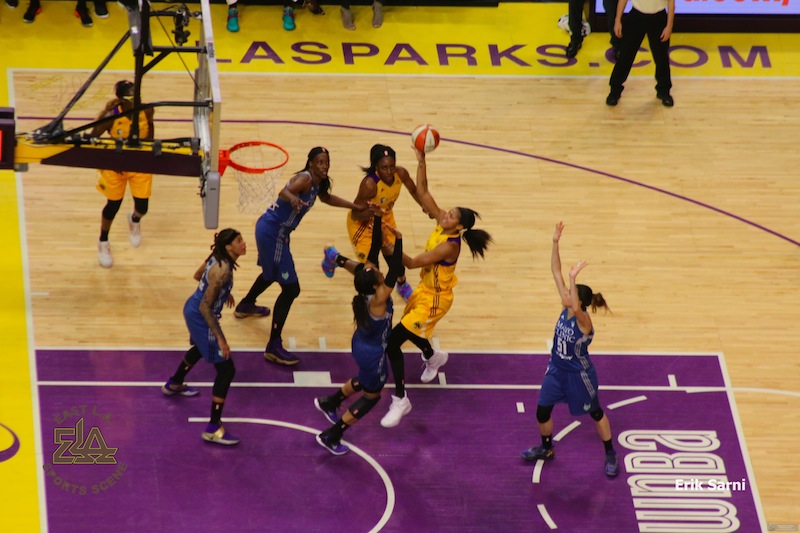 Game 4 Overview, Sunday 10/16/16: The current WNBA series was in favor of the Los Angeles Sparks at (2-1). Finally, having the true “home-court advantage” at Staples Center, the #2 seed in the 2016 Finals, was looking to claim their third WNBA Championship in team history with a victory in Sunday’s game against the defending WNBA Champions, the Minnesota Lynx. The last L.A. Sparks WNBA championship came in the 2002 season when the team was led by 3 x WNBA MVP, 4 x Olympic Gold Medalist and 2015 Hall of Fame Inductee, Lisa Leslie. The experts made the Sparks slight favorites to win this closely contested game four.

In spite of one of their largest crowds of the season, 12,885, and with numerous celebrities such as Kobe Bryant and family, Cedric the Entertainer, and Laker legend himself, Earvin Magic Johnson all on hand, when the final buzzer had sounded, the score would read the Minnesota Lynx 85, the Sparks 79. Thus, with the Lynx victory secured and the series now tied at (2-2), a WNBA fan-pleasing, nationally televised Game 5 on ESPN2 is in order, back in Minneapolis-St. Paul, Minnesota on Thursday, October 20th at 5 pm PST.

In looking ahead to Game 5, and as our headline reads, the Sparks are confident and optimistic about their opportunity of winning the title on the road, simply because they’ve already defeated the Lynx twice on their home floor this season. Nothing prohibits them from winning one last time with the stakes being what they are. They are a very young team with depth at every position and they know their opponent quite well. Coach Agler will have his team prepared and ready to go. Last thought if you’re a devoted and longtime Sparks fan…”Everybody Clap Your Hands,” And “Let’s Go Sparks!!”

Game 4 Summary: Give Maya Moore, 2016 Rio Olympic Games Gold medalist, All-WNBA, and 2015’s MVP, much of the credit for the Lynx win as she demonstrated her total and prolific skills-set, scoring at will with key baskets and great assists time and time again. Her statline reflected the following incredible game-high numbers: 31 points/9 rebounds/5 assists/3 steals/9-17 field goals/2-4 3pt field goals/11-12 free throws/2 blocked shots/34 minutes. She was capably backed up by teammates and fellow Rio Olympians, Lindsay Whalen (13 pts.), Seimone Augustus (12 pts.), and Sylvia Fowles (10 pts.) who all contributed to the victory with their excellent individual game performances.

For the Sparks, they would come out of the blocks rather slow in comparison to their huge Game 3 win last Friday at USC’s Galen Center. For the next three quarters, it was a game of runs and stops for both squads. The halftime score was Lynx 46, Sparks 40. The teams played nearly neck and neck through the 3rd and 4th quarters with no lead ever going higher than 6 points. But the inevitable turnover bug would play a critical and decisive part in the final minutes of the game, as it bit hard into the Sparks on several plays just after they regained their momentum to close the gap to just 2 points with 2 minutes left to play in the game. Seassoned veterans Candace Parker (14 pts.), Nneka Ogwumike (11 pts.) and Kristi Toliver (15 pts.) matched up well with the Lynx given their overall play, but it was second year player, Chelsea Gray, with her following statline: 20 pts./6-11 FGs/4-5 3 Ptrs/4-4 free throws/3 rebounds/2 steals/1 assist/24 minutes) who stepped up big time on offense and brought the crowd roaring to its feet after her 4th successful and badly needed 3-pointer. Her heroics brought the Sparks back to within two at 77-75 with @2 minutes remaining. Rebekkah Brunson (Lynx) then answered making it 79-75 and with 1:40 left, Alana Beard scored on a drive to make it 79-77. Then after a Lynx time out with 1:11 remaining, the play of the game occurred on a highly questionable call by the referee. It appeared on the Staples big screen replay that Candace Parker clearly blocked a Lynx put-back, but to no avail and she was whistled for a foul. Thus, instead of a jump ball and a chance to regain possession, and either tie or go ahead with a 3 point play or a 3 point shot, the call sent the Lynx player to the line where she calmly sank both free throws, making the score 81-77, Lynx. The Sparks scored their final basket of the game on a Nneka Ogwumike drive with 12.5 seconds left, 81-79, Lynx. The Lynx closed the game out with Maya Moore sinking four consecutive free throws after the Sparks had to foul hoping for missed shots. Moore guaranteed Coach Cheryl Reeve, all of her teammates, and all of their Lynx fans that the Sparks’ chance to tie or win would never materialize.  Rico Cabrera, Sr./Editor, EastLASportsScene.Com.