They Face Serious Test In Game #1 Against Chicago Sky 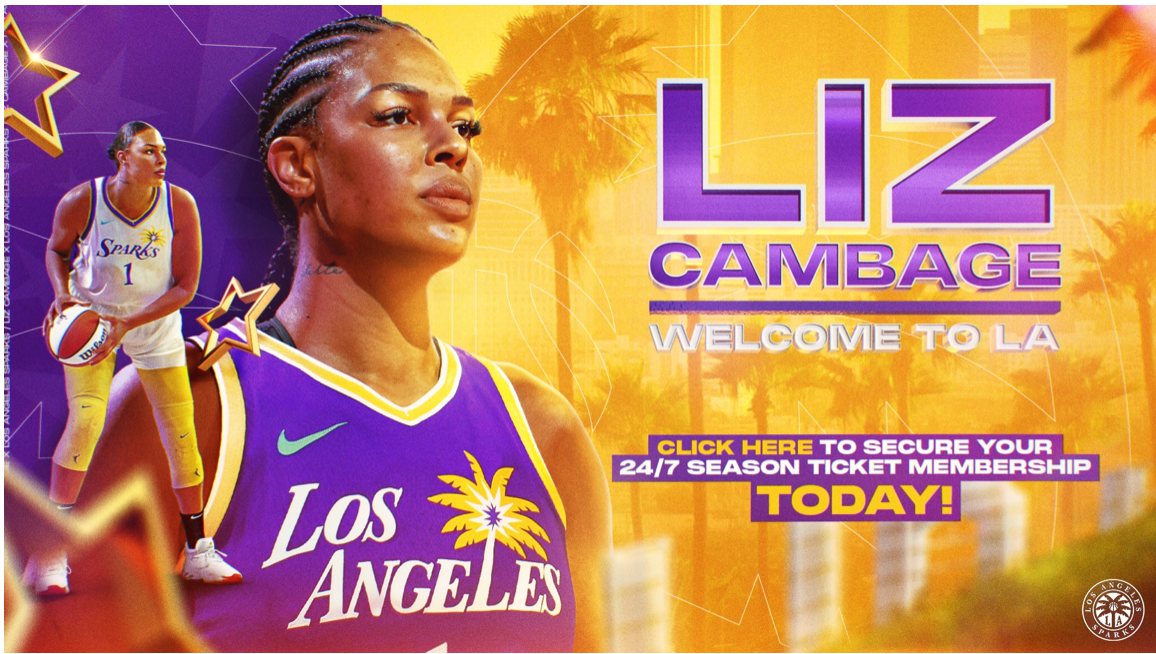 Pictured above is the newest Mega-Star to join the Sparks, 6-9, Center, Liz Cambage. As well-established team leaders, she and franchise Mega-Star, Nneka Ogwumike are set to open up the Sparks season on the road against the defending WNBA Champions, Chicago Sky, in one of the most featured WNBA openers. Fans can watch it on the SpectumSportsNet Cable TV platform. Please note that the above link in the graphic to 24/7 Season Ticket Membership is not active. To access it, please go to their website at sparks.wnba.com Graphic: Los Angeles Sparks

(East Los Angeles, CA) May 1, 2022 [From The Editor’s Desk]: Perhaps it was just coming on the heels of a very successful “In-Person”” and Zoom Media Day on Thursday, 4/27, coupled with the Los Angeles Sparks making their solo Southern California pre-season debut at Cal State University Northridge’s (CSUN) well-known “Matadome”. Add them together and the Sparks defeated the Phoenix Mercury (87-84), as the team rallied late in the game to earn themselves the hard-fought win.

Unfortunately, those fans who were present did not see the full Mercury line-up due to  the absence of their Mega-Star, Brittney Griner, who remains in detention in Russia. The Sparks overcame a 10-point fourth quarter deficit and won with a strong and successful final run at the Mercury, good enough for the win. Here is the teams’s Public Relations Department’s brief synopsis and highlighted account of how the Sparks picked up their one and only official Pre-season win of the 2022 season.

(Significant Notes On The Game):

During his Zoomed post-game Press Conference, GM/Head Coach Derek Fisher signaled out the big contribution by 2nd year player, 5-10/Arella Guirantes, native of Puerto Rico and a Rutgers University alumni, who made key and winning plays in “crunch time” during her (6:29) minutes of playing time. Guirantes was credited with (2) defensive rebounds, (1) assists, (1) blocked shot, & (1) turnover for an overall game rating of [+/-] = (+9).

The Sparks then returned to their new Training Facility on Monday, 5/2 at Jump Beyond Sports, located in Torrance in preparation for their first road trip of the season which “tips-off” on Friday, May 6th in Chicago as they take on the Sky.

(“Must Read” Team Update): This past Tuesday, the Sparks had to “waive” the following three players in cutting down to the allotted (12) player roster size for the season. They were: 1) Te’a Cooper, a 3-year veteran guard; 2) Arella Guirantes, 2nd-year reserve guard; and 3) Kianna Smith, their #16 overall draft pick, from here in Southern California.