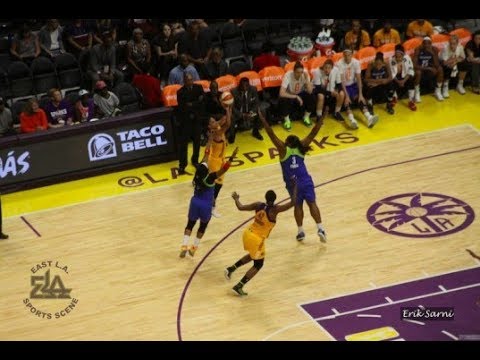 The L.A. Sparks just keep rolling along on their brand new win streak. It has now reached four. Quickly recovering from their dramatic on-the-road loss to the Minnesota Lynx (72-69) on June 21, the Sparks strapped on their battle gear and went back out searching for more victories in their WNBA version of “Wars on the Floor.” After winning their rematch with the Lynx (94-76) at home on 6/24, and then defeating the Connecticut Sun on 6/26, their next home victory came at the expense of the Dallas Wings, featuring their All-WNBA player, Skylar Diggins, formerly of Notre Dame University.

Game Summary: Although the Wings (7-9), had five players in double figures, with Skylar Diggins pouring in 29 points, the Sparks countered that with Candace Parker’s 31, Essence Carson’s 17 points, and Kristi Toliver’s 13. In the end, the edge in rebounds and the highly enthusiastic fans contributed to this key win. The final score was 89-84. The Sparks now stand at a highly respectable (14-1) overall record. By: Rico Cabrera, Sr./Editor, EastLASportsScene.Com

Please be sure to watch our highlight video of this very important game.

Photo Gallery:  In addition to our regular photo gallery of the game, we continue onward with our tribute to our Armed Forces and Veterans. To highlight them, we’ve inserted some photos into this gallery.