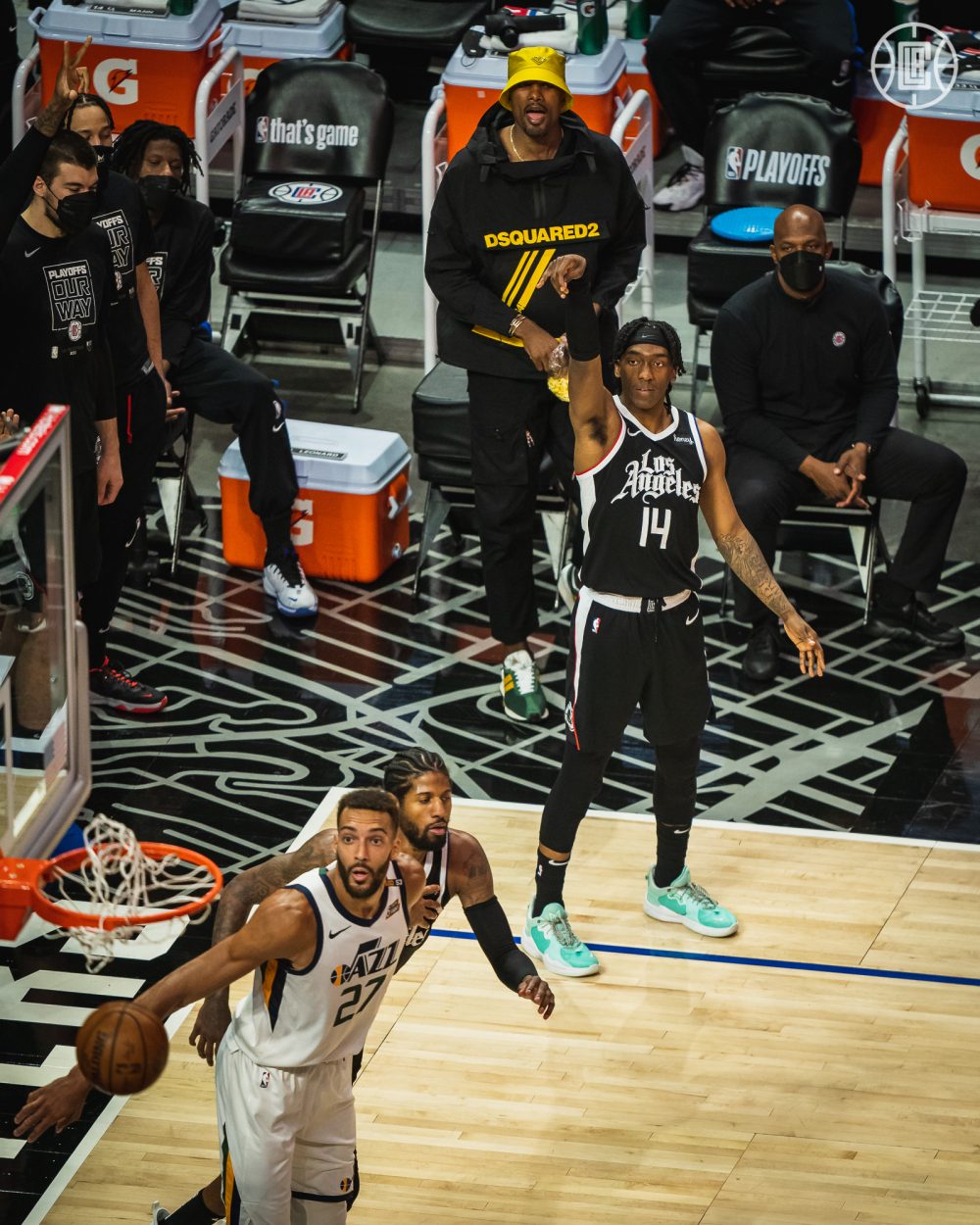 (East Los Angeles, CA) Juneteenth, 2021 [From The Editor’s Desk]: On a historic night in the 2021 NBA Round 2 Playoffs, the Los Angeles Clippers pulled off their fourth straight playoff win against the #1 seed Utah Jazz, and thus earned their way to the Final Round starting this Sunday, Father’s Day, when they travel to  Arizona’s Valley of the Sun, and take on the Phoenix Suns in the opening game. This coincides nicely with the continuation of our Special Clippers Father’s Day and 30th Anniversary – East L.A. Sports Scene Celebration Give Away. Learn more on how to register by visiting our website posting from June 16th. 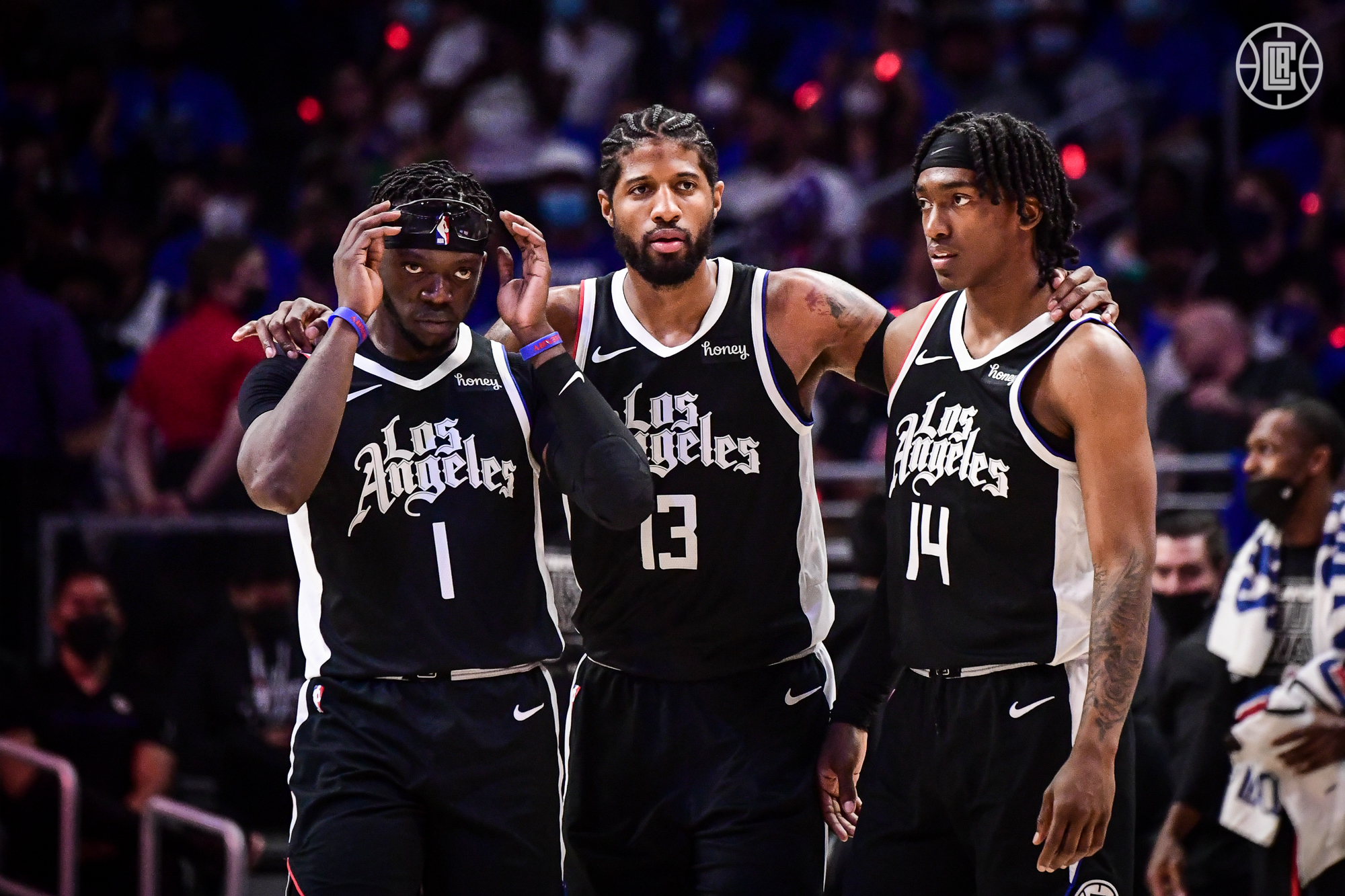 Think of an adjective and then begin your description of what took place in Game 6 at our great venue known as the Staples Center. What comes to mind? Incredible, sensational, unbelievable, mind-blowing, miraculous, etc….Then for good measure, add the game performance of one of the newest names in the NBA to its growing list of the rising young stars, and there is the explanation–#14/Terance Mann is Theeeeee Mannnn! The sphere, known as a basketball, is coated with leather, and inflated to a weight of 1.3 lbs. It became comparable to a guided missile once it was released from the hands of the Clippers’ sharpshooters. The heat-seeking projectile then cleanly and forcefully swished through its target, for nothing but net. It was literally raining 3-point bombs inside of Staples, complete with their fans’ roaring approvals, when launched by the Clippers Bomb Squad.

As we will interchangeably refer to them in this quest to win their first-ever NBA Championship, Game 6’s Band of Brothers United (BOBU) combined to score in double figures, led by the “Player of the Game,” Terance Mann/39, Paul “The Pack Leader” George/28, Reggie Jackson/27, Nicolas Batum/16, and Patrick Beverley/12. 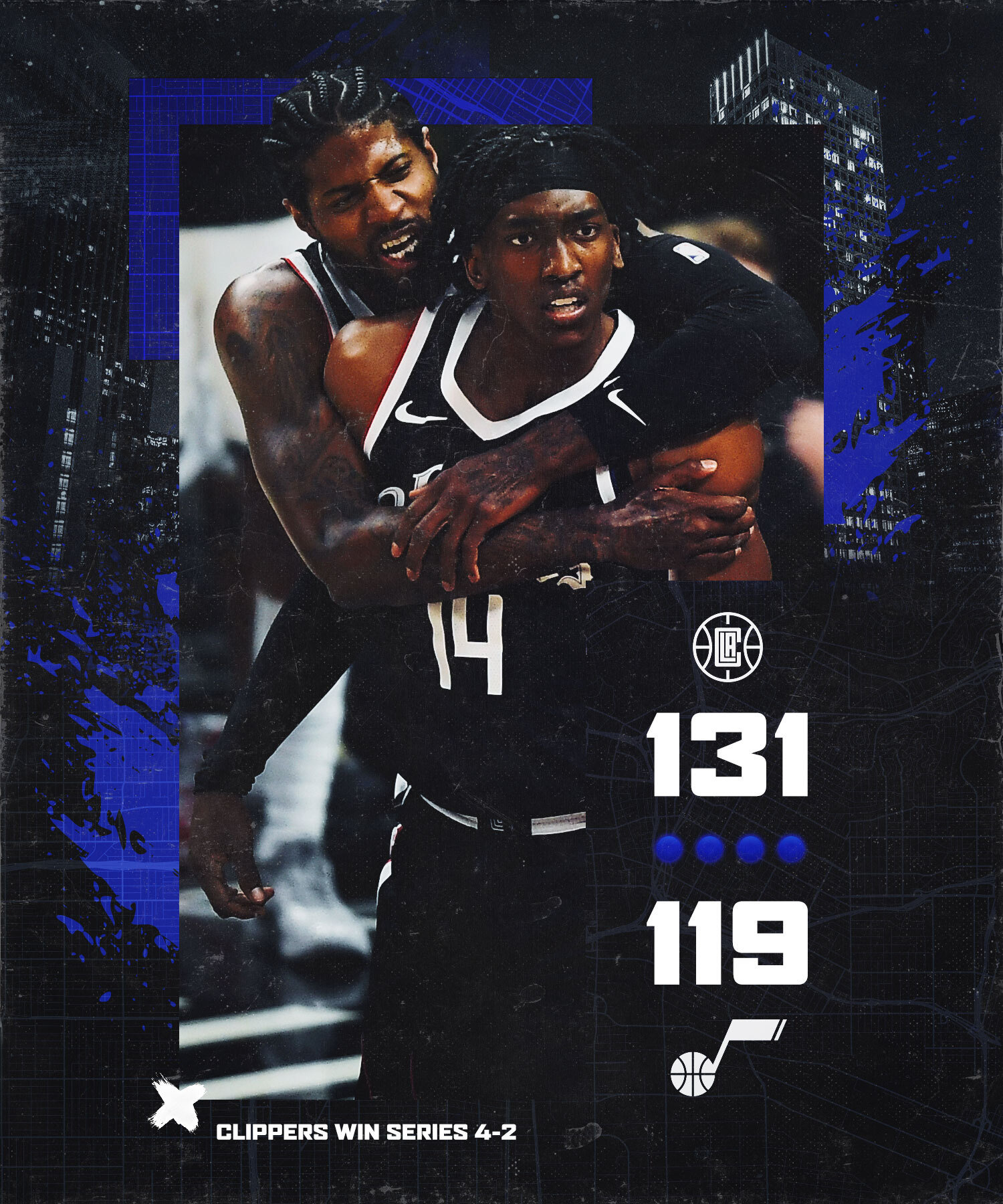 That’s why they play these games…and it’s never over till it’s over, has been the old die-hard standard of when an NBA game has officially ended. On last night’s historic calendar date of Friday, 6/18/21, that was evident as the Clippers did NOT quit even when they were down by a whopping 25 points early in the third quarter. There was still a total of 22 minutes left to play in the game with the score, Jazz 75, Clippers 50. The drama everyone was to witness was just being discussed by Coach Lue and his staff.

Thus, in the timeliest “heat of battle” moment, up stepped the Man(n) who was given the plan by his Head Coach, Tyronn Lue. Imagine their exchange going something like this..”I don’t care how you do it, but you have to get it done. Show me and the fans what you really got.” Mann’s answer could have gone like this..“Alright Coach, thanks for the green light! Now watch me go to work!!” And away he went, like there was absolutely NO problem performing like he chose to do on this NBA ultra sporting stage known as the Staples Center. 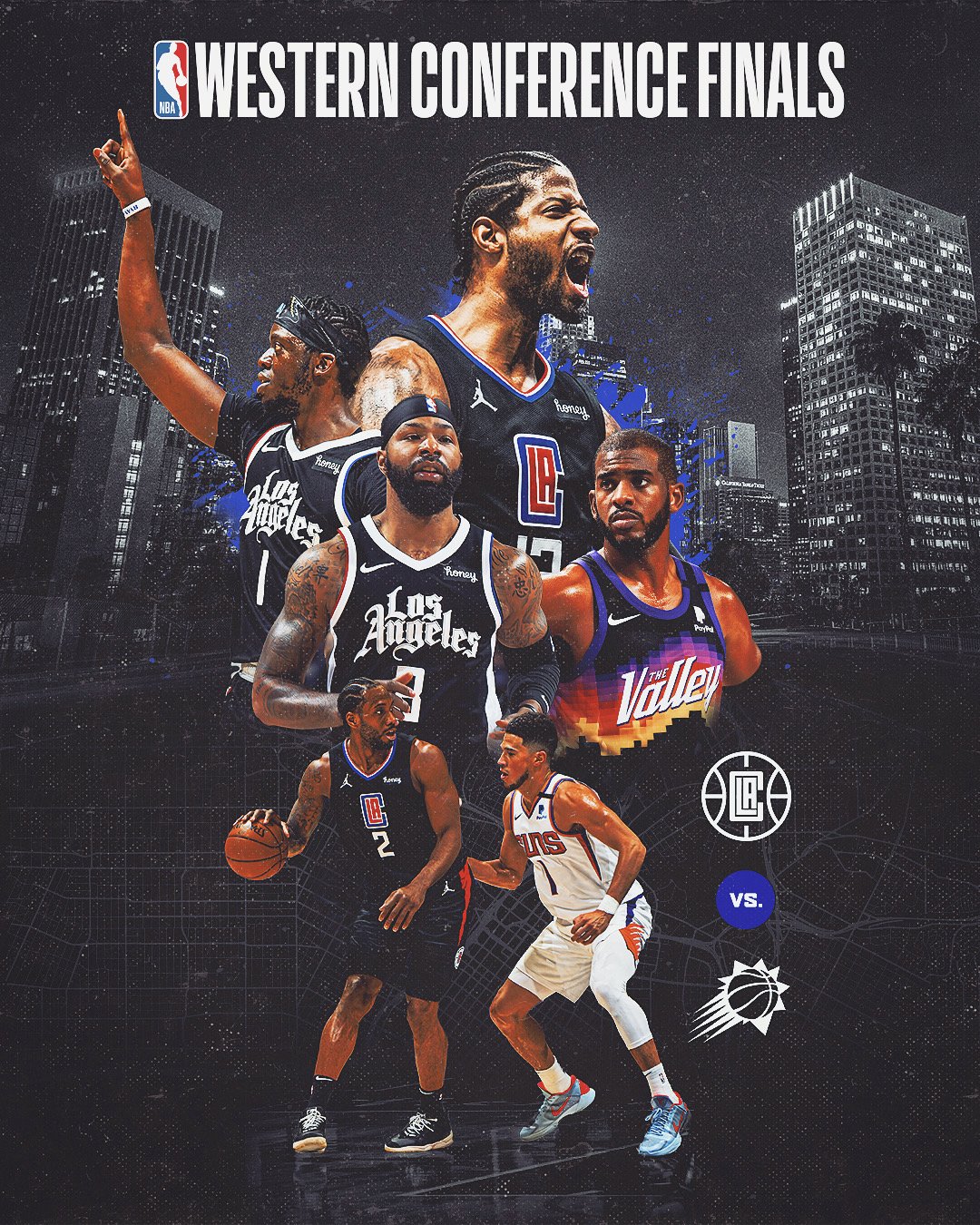 And in the explosive expression of his youthful athleticism, Mr. Mann found the precise rhythm of taking his shot, and moving without the ball to get open. He did it so repeatedly that he propelled his team from being down by those 25 points early in the 3rd period to come storming back with five minutes left in the period to draw to within 7 points. Bedlam was beginning to show its welcomed presence with resounding waves of DeeeeFence! DeeeeeFence! cascading throughout the Center from that point on in the game. (Of Signifcance): Third quarter stat, Clippers 41, Jazz 21. The “Mann On Fire” accounted for (20) of those crucial points.

In the fourth quarter, Clippers confidence was soaring and everyone was feeling “Mr. Momentum” arriving right on time. And still, the bomb squad was taking aim and blasting away with bullseyes on their target as the Clippers, unbelievably to many, took the lead early in the final period. Ecstatic fans were cheering, chanting, and just staying on the edge of their seats with every basket made, every stop made, and every rebound taken. 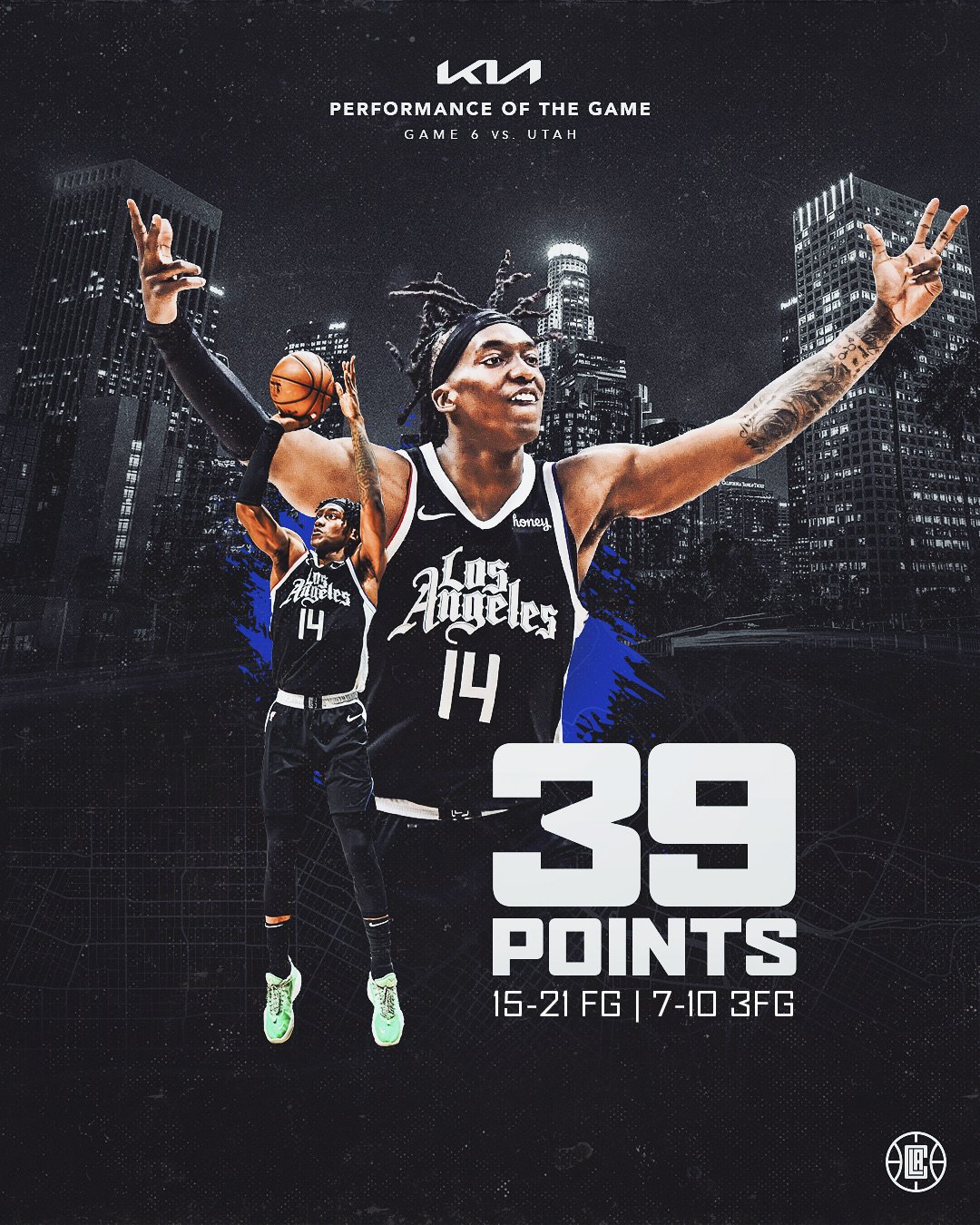 Coach Lue gets high and lofty praises for downright out-coaching his counterpart Quin Snyder because he changed the stakes in the game to go from a post and perimeter game to just a plain spread court with his three guards and two “big wing” men. This exposed Utah’s center/7-1/ Rudy Gobert’s weakness at guarding the perimeter when Clipper guards were driving and penetrating. Thus, many clean and open looks at the basket were in order. The sought-after result, 3-point heaven. So with just 3 minutes left in the game, and Donovan Mitchell on the bench for the medical team to check on his aggravated leg, the Clippers simply rode out the clock and kept the Jazz at bay for the remainder of the game. A huge “hats off” to Donovan Mitchell for his willingness to give it his all in spite of playing in pain. He finished the night with 39 points in 40 minutes.

A big reason for this historic victory can certainly be attributed to the overwhelming fan support that was evidenced. This was the first full house of the season for the Clippers and millions more were watching on their TV & Home Entertainment Centers in utter amazement and enthusiasm. On a final note, the biggest factor in this clinching win was the (81-47) point differential in the 2nd half favoring the Clippers. Now, that’s Game!! 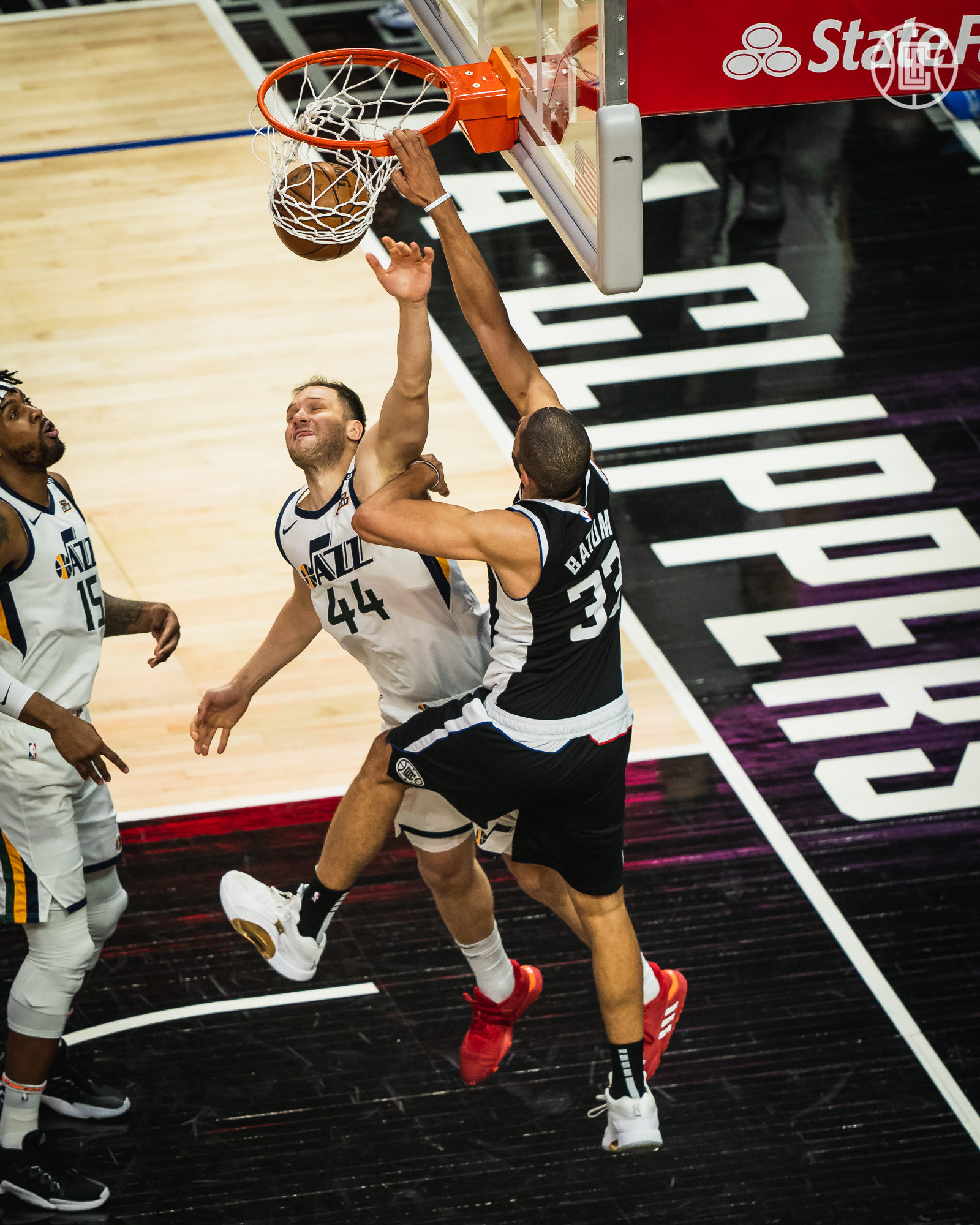 In a quick recap, it can be said that basketball audiences everywhere saw a contest that started as a dark nightmare for the Clippers to a brilliant sunrise for them in the end. When there was no time left on the scoreboard, the final score was an awesome sight for the 17,105, “sold-out” crowd, as it showed  (131-119) for its beloved team. There is now absolute joy and celebration happening all throughout Clippers Nation. However, the good fortune is “short-lived” because the NBA Finals must move on to the next round beginning 6/20. In closing, we take this moment to wish all of the dads who are following us, and those who are just now finding us, a great Father’s Day 2021. Hope you all enjoy it to the max!

(Next Up): Phoenix Suns, Sunday, Father’s Day, June 20th, on their home court for Game 1.  Tip-off is scheduled for 12:30 pm (PT) and will be carried on Ch. 7 locally and the ABC Network nationally.