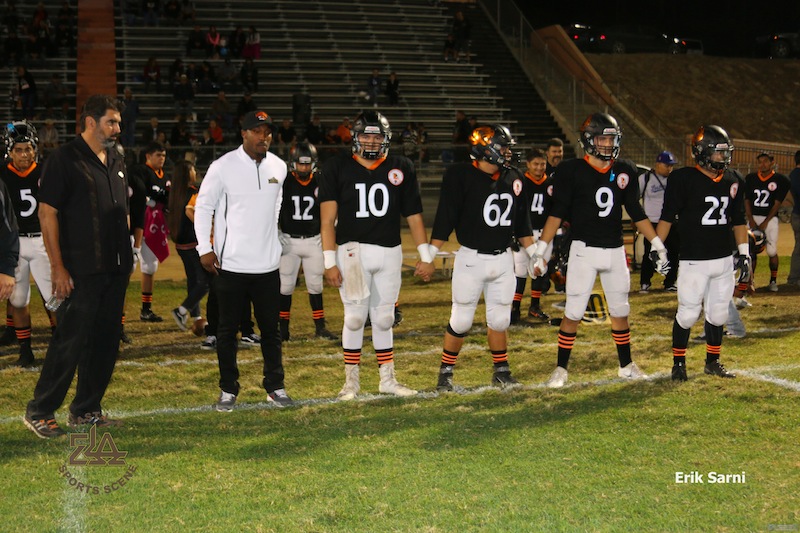 Welcome to our Special Feature, the Weekly High School Football Round-Up by Rico Cabrera, Sr. Editor, EastLASportsScene.Com. Special Greetings to all of our devoted fans and followers!! It’s that time of the 2016 season that things are getting very interesting and very serious as the season moves into crunch time for many of our teams. We still have one undefeated team, Cathedral (7-0), still ranked #19 in the LA Times Top 25 weekly poll, and several with just 2 losses. Bishop Amat also remains in the Top 25 at #14. Salesian is holding ground for its playoff push as they focus on their next Angeleus league oponent, their old, and now newest rival, Cathedral. This game will receive very wide coverage and special attention from many high school reporters, coaches, and experts. Look for this as our “Game of the Week.”

Note From The Editor: Don’t forget to check out our weekly photo gallery and the wealth of pictures that tell the story of the games. If you have not seen your school shown yet, it’s due to the fact that we don’t have a designated photographer. If you know someone who is interested, please have them Email me at rico.p.cabrera@eastlass.com. Thanks in advance!

All City Sections teams are now into their third week of League play, and are pushing and grinding hard for a strong finish going into the playoffs. At this time, eight of our covered teams are in good positions to reach the post-season.

Eastern League recap: A protest was lodged by the Garfield Bulldogs after they were defeated by South Gate Rams. A claim of ineligble players was the main complaint filed with Commissioner John Aguirre and his Office. The report was filed by featured, and well-known staff writer, Eric Sondheimer, L.A. Times. We’ll let everyone know the results in our next posting. Meanwhile, the Roosevelt Rough Riders continued their unwelcomed losing streak and were upended in a one-sided loss. They’re still looking for their first League win.

Northern League recap: The Lincoln Tigers won the 6th Kennny Washington Memorial game over their rival from Highland Park. They remain undefeated in League play. The Wilson Mighty Mules earned themselves a huge win on Homecoming night as they scored in the last minutes of the contest. Torres was unfortunately shut-out but hopes to quickly recover for this week’s big Homecoming game.

The Metro League’s Mendez Jaguars started league play with a loss, but continue to play with lots of heart and courage. Think of a work in progress and give the team and the school much credit for fielding its inaugural varsity team.

Week 7 featured a (1-2) record for CIF/SS teams. In big rivalry news… Cathedral and Salesian will take center stage in a gigantic battle of Angelus League teams. Throw out the records and appreciate the intensity in both spirit and competition in this match-up. It’s always a great and special environment for our communities to come out and suport their student-athletes and schools, especially under Friday Night Lights!! Should be another game sell-out with standing room only expected. We’ll keep our eyes keenly focused on this match-up. Bishop Amat is still ranked in the L.A. Times weekly poll and “game-by-game” meticuously moves through their very tough Mission League schedule. A strong finish will keep the Playoffs still in sight.

Note From The Editor: *Garfield, *Cathedral, and *Bishop Amat have their own websites with their schedules. For the seven other schools, click on the “link” below to view their respective schedules as posted on Maxpreps.Com.