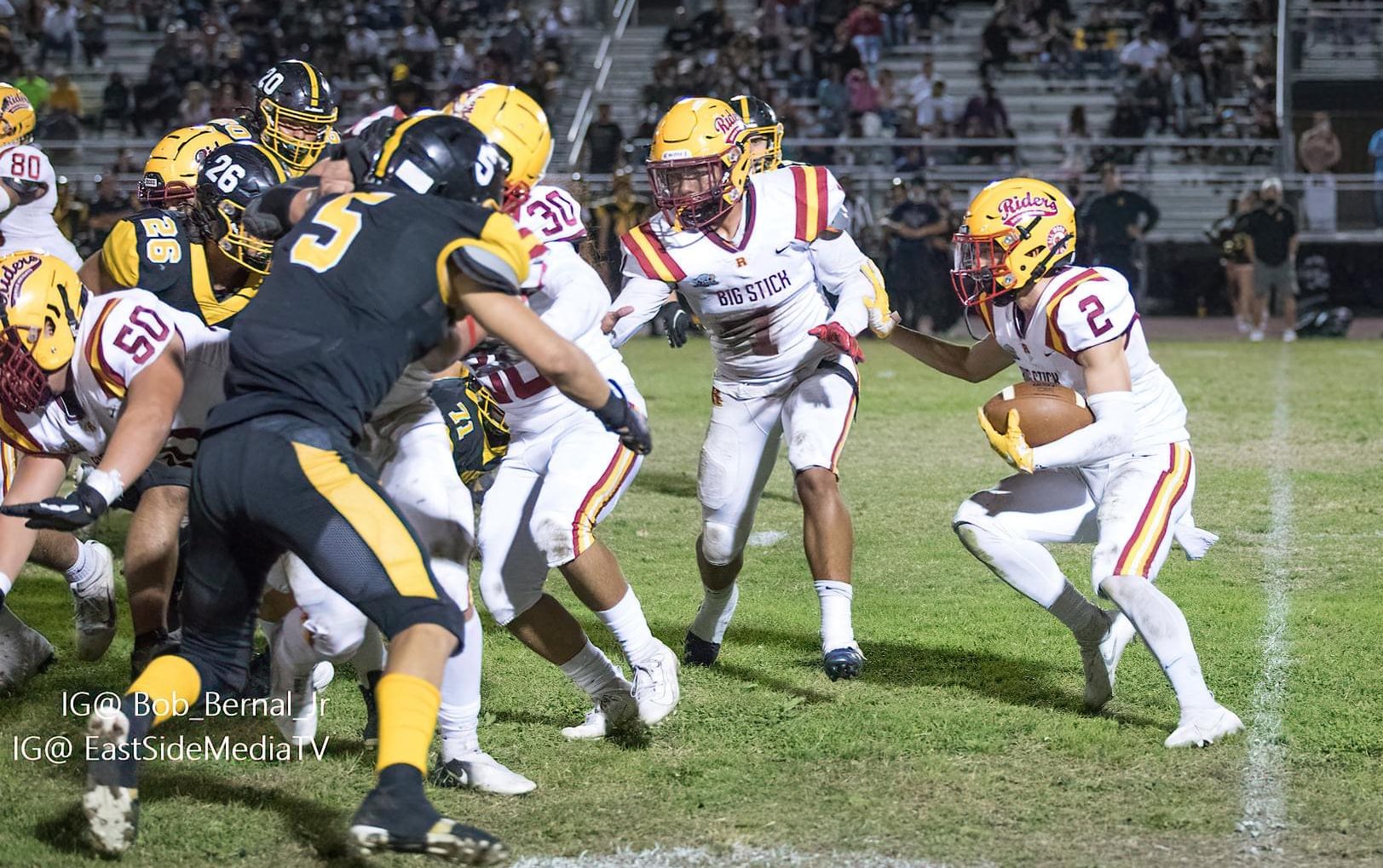 (Boyle Heights/East Los Angeles, CA) November 17, 2021 [From The Editor’s Desk]: Although it was a slightly warmer than normal day here in the City of Angels and East Los Angeles/Boyle Heights, the game and field temperature dropped to a very low of 60º at the kick-off of the 11/12 Roosevelt vs. San Pedro CIF/L.A. City Section (LACS) “Open” Division, Quarterfinal football playoff game. The Riders had a slightly longer freeway school bus-ride to the city of San Pedro and some extra time to reflect on the task at hand. Nonetheless, it was time to head into battle for the right to move on in the 2021 playoffs.

(Game Summary): All of the pre-game preparation took place without anything happening out-of-the-ordinary routines that teams must go through. However, terrible news awaited the Riders on the very first play of the game, when one of their highly valued and most durable players, #10/LB/Carlos Velasquez, had to suddenly be removed from the game due to a dislocated shoulder. Due to his stellar play all season long, as well as in the East L.A. Classic, Velasquez, one of the team’s top “iron-men,” could possibly have made a difference in the outcome, but it will never be known, because he unfortunately, would never re-enter the game. 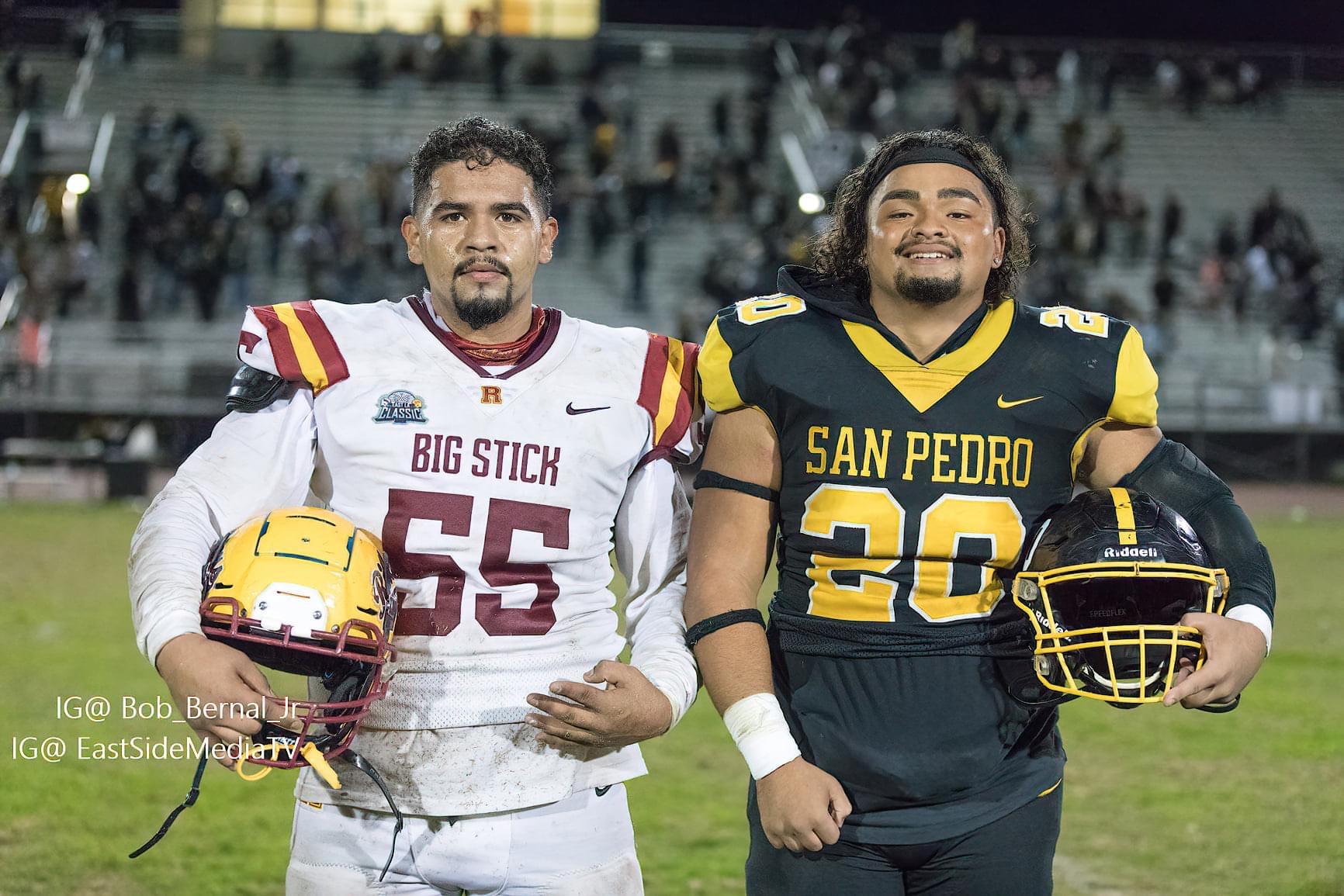 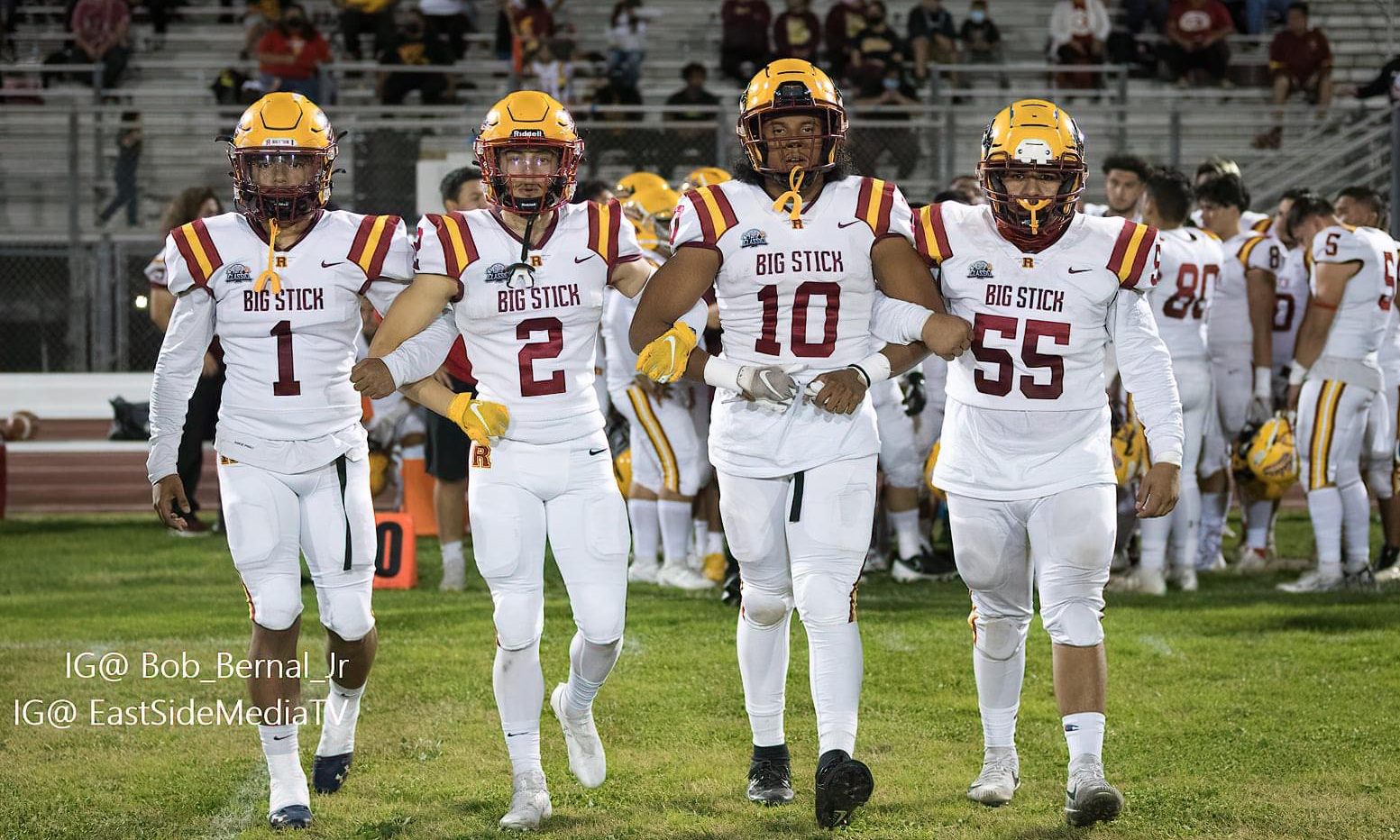 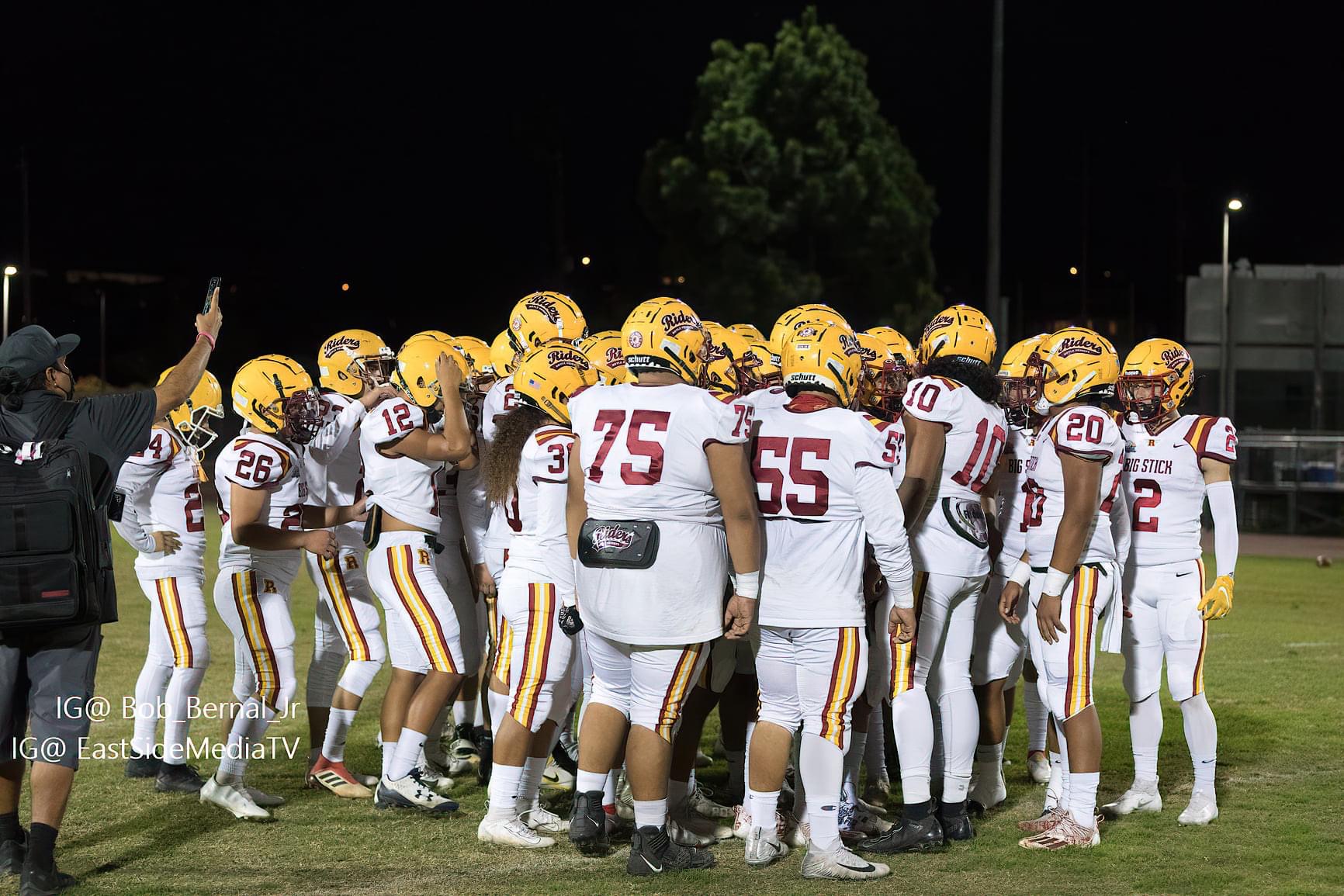 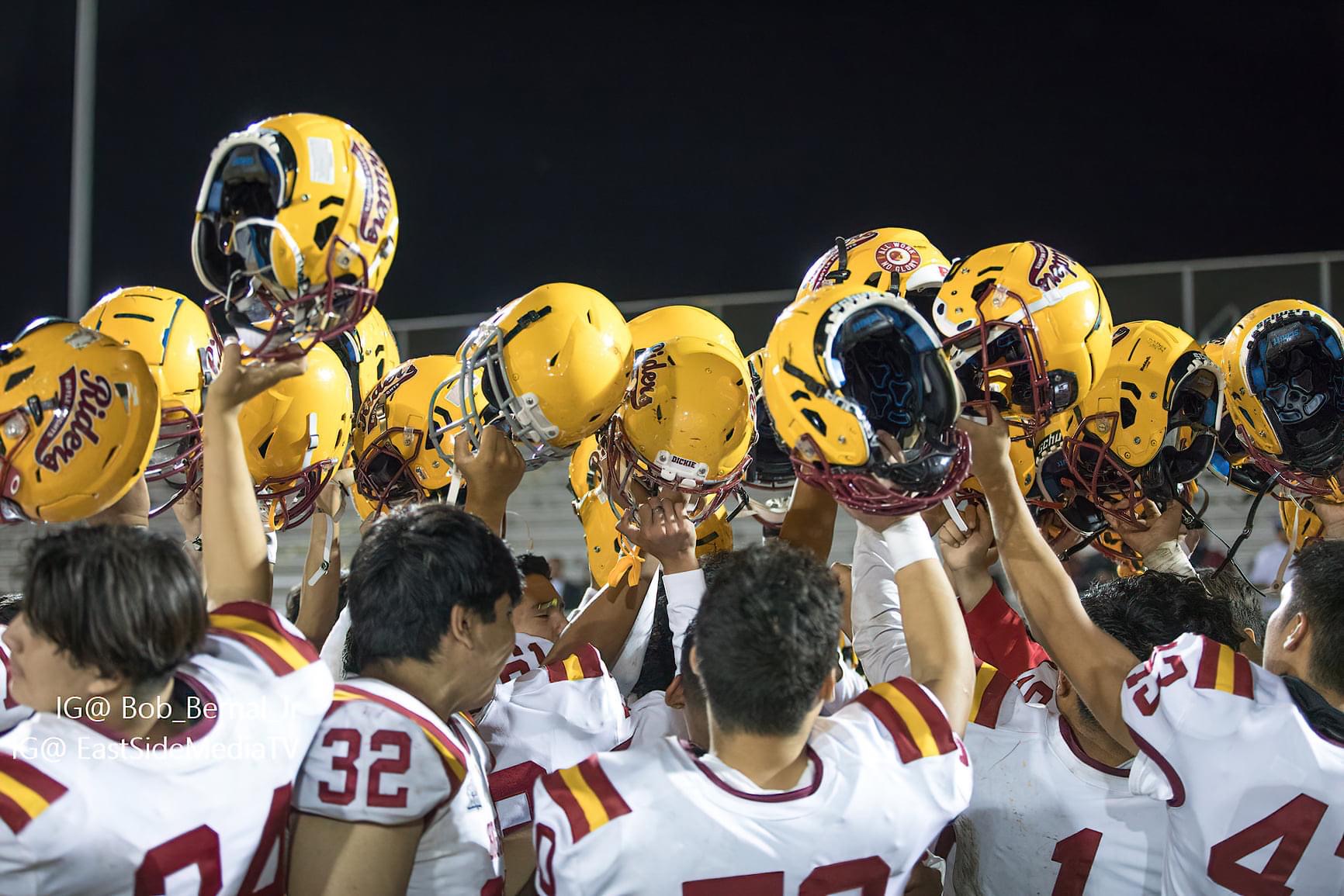 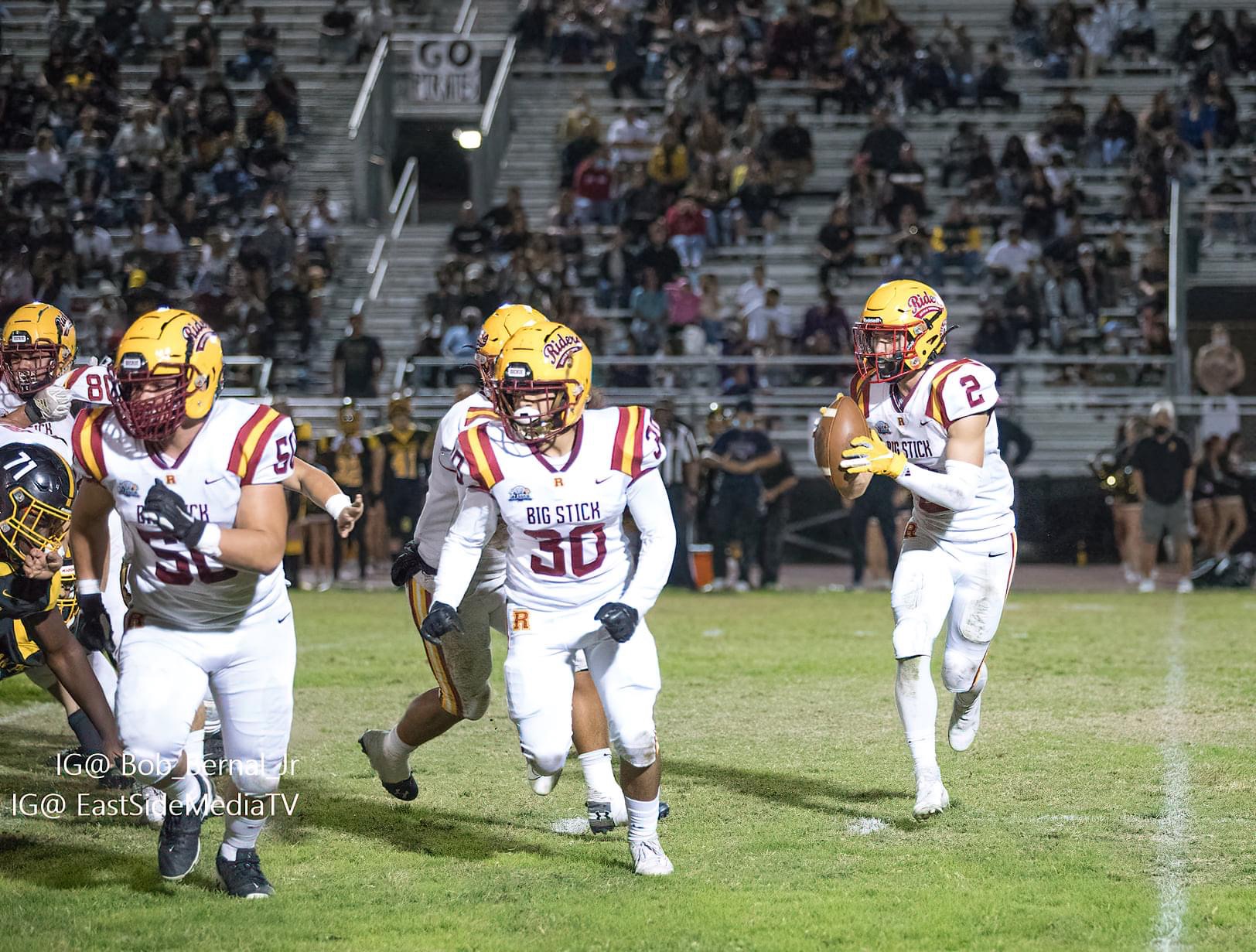 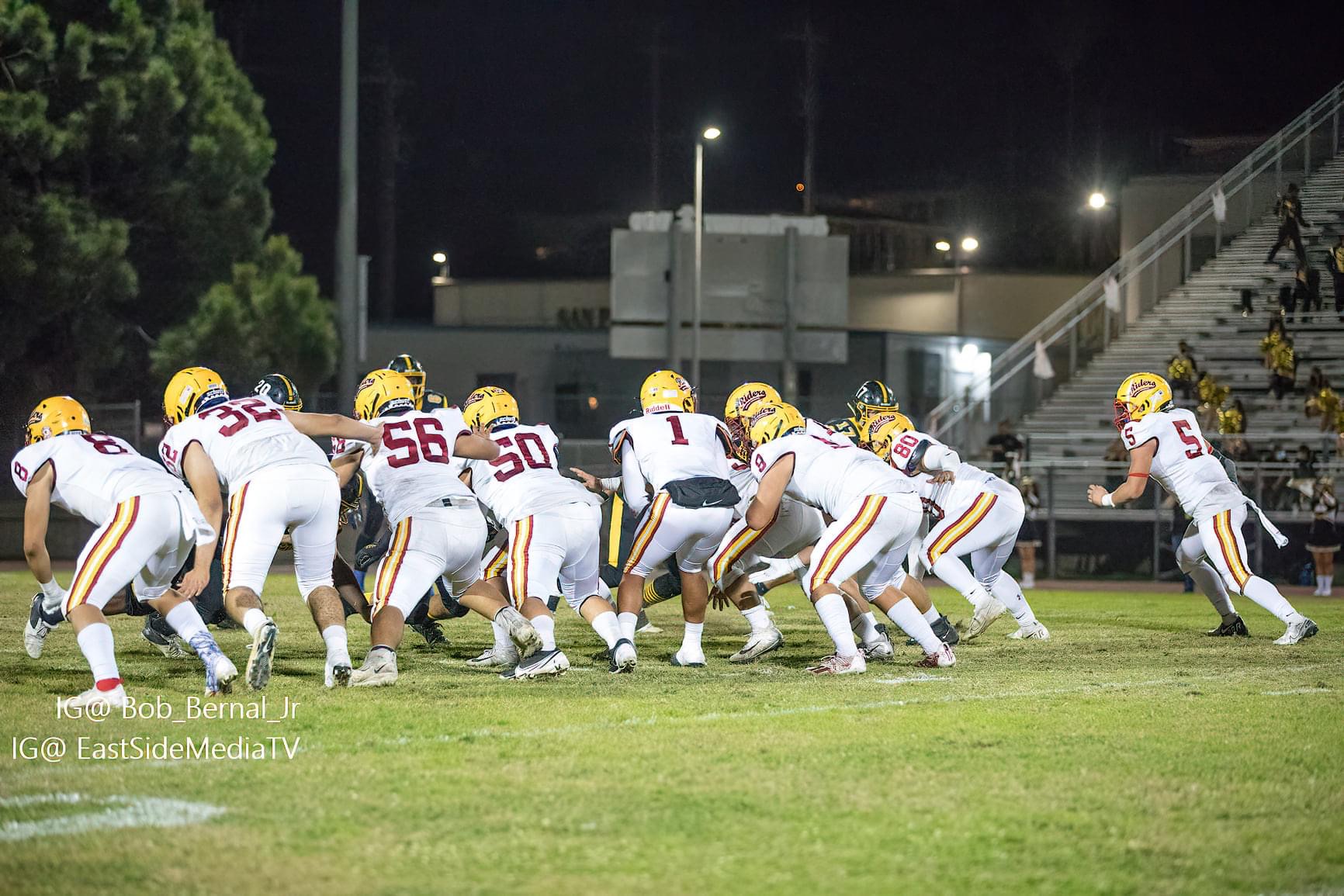 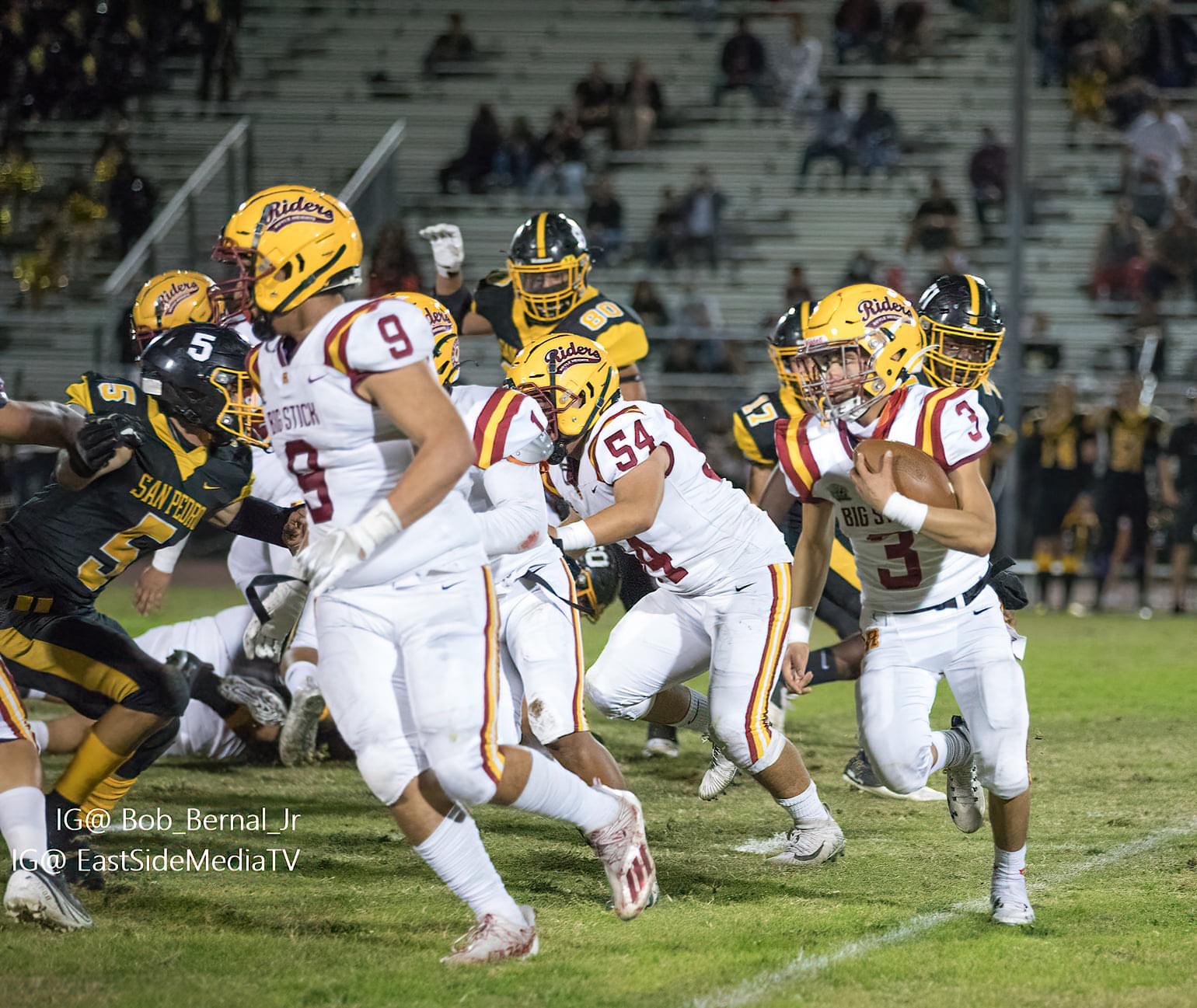 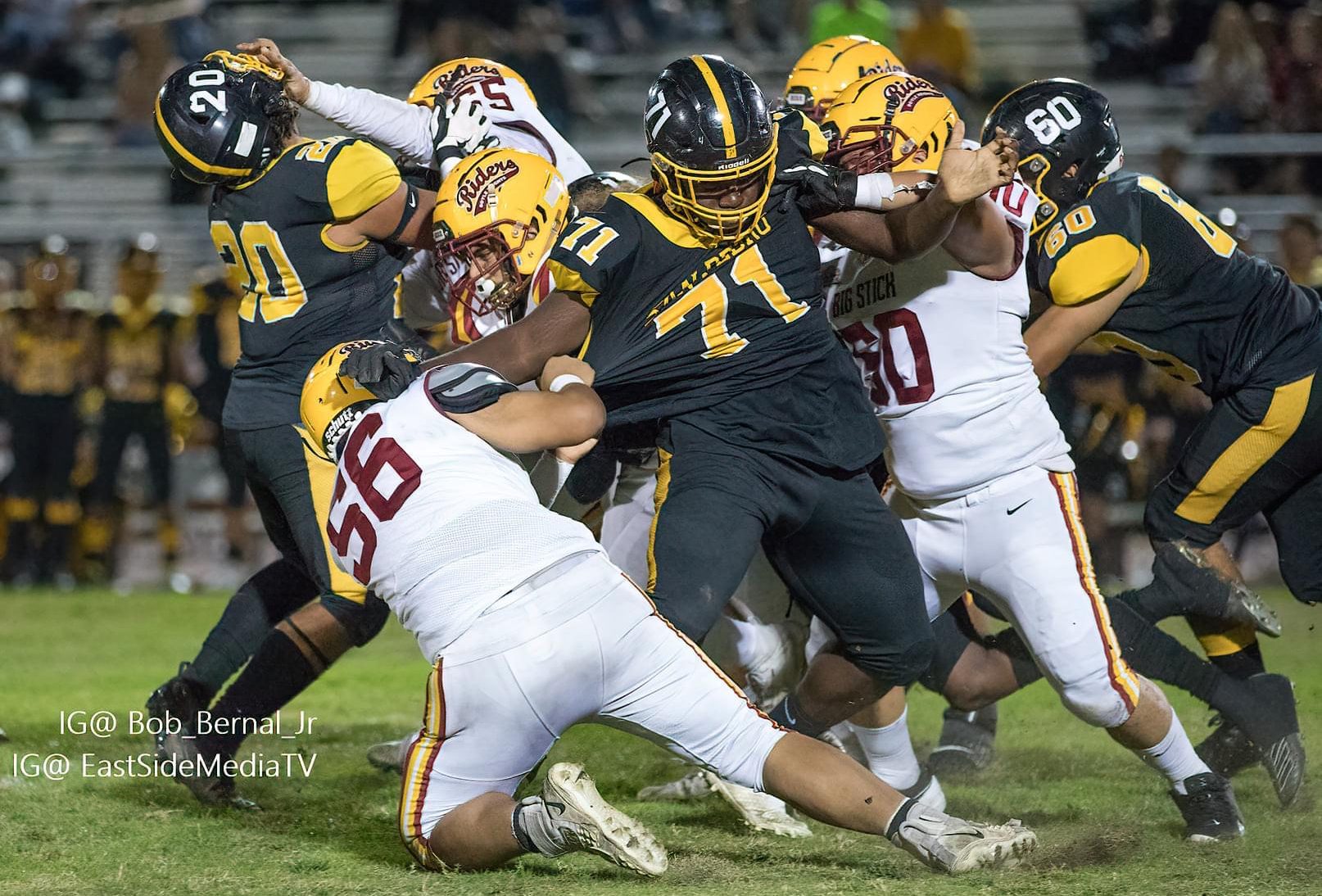 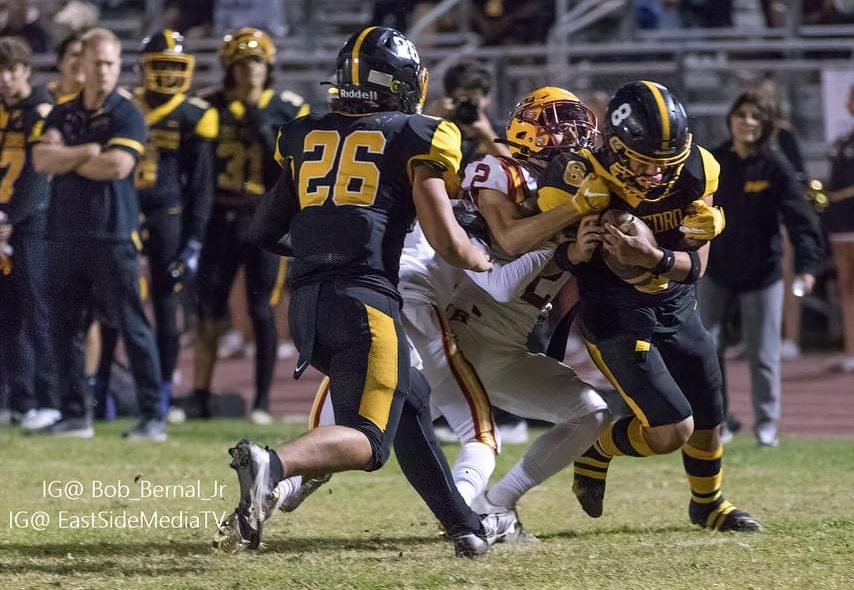 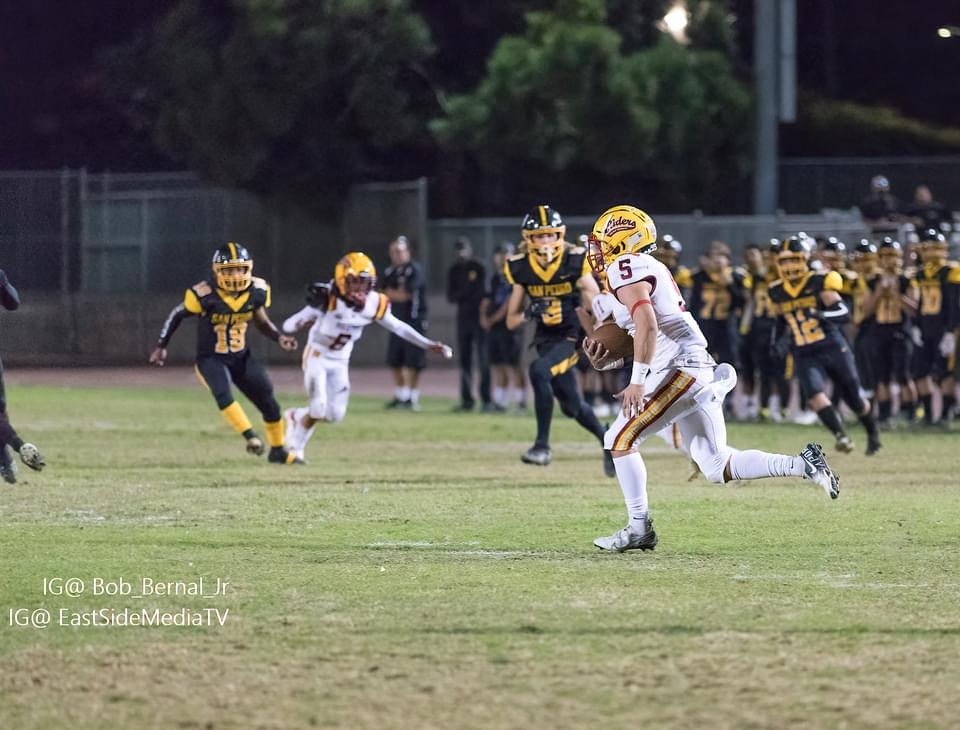 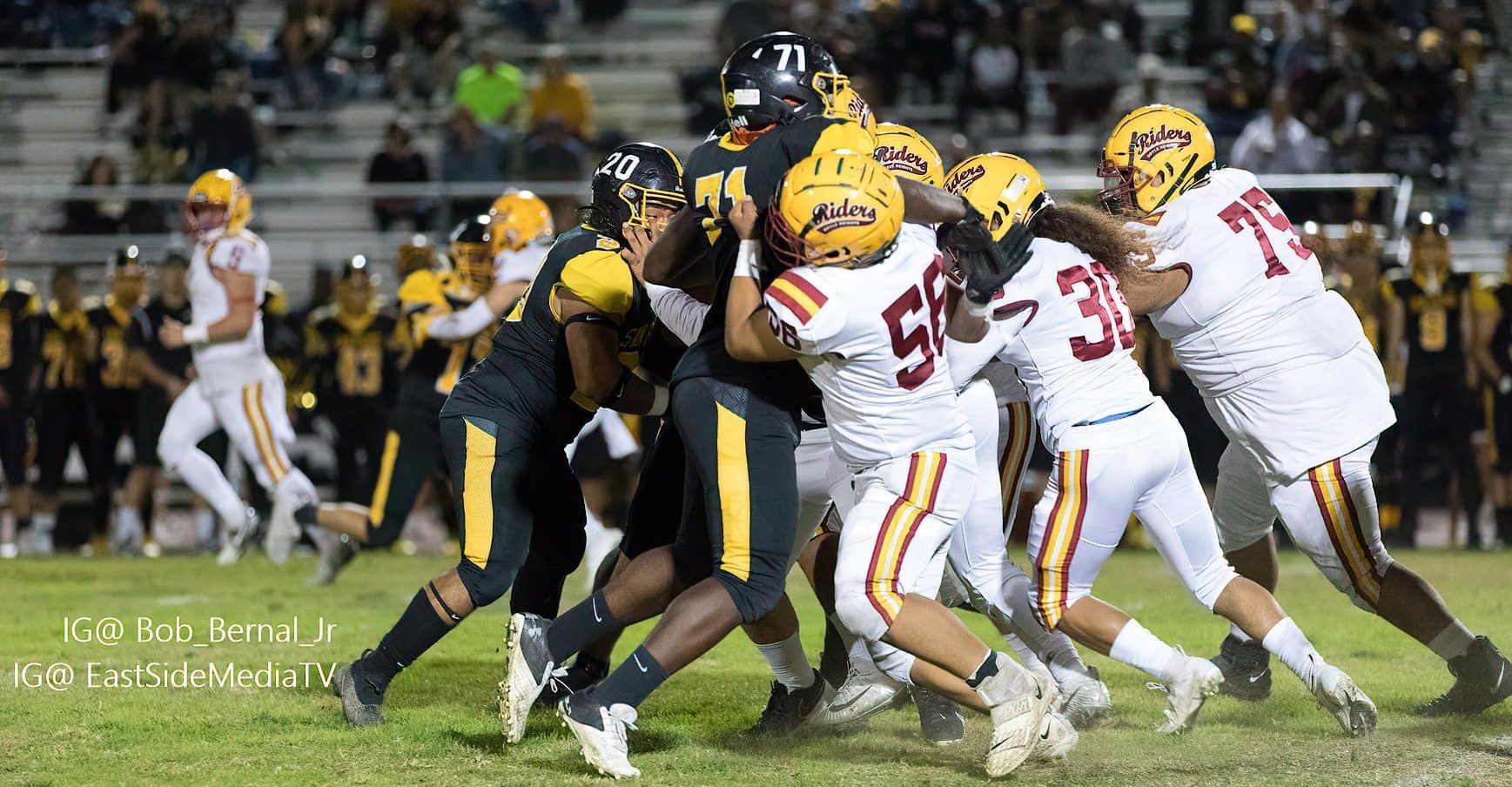 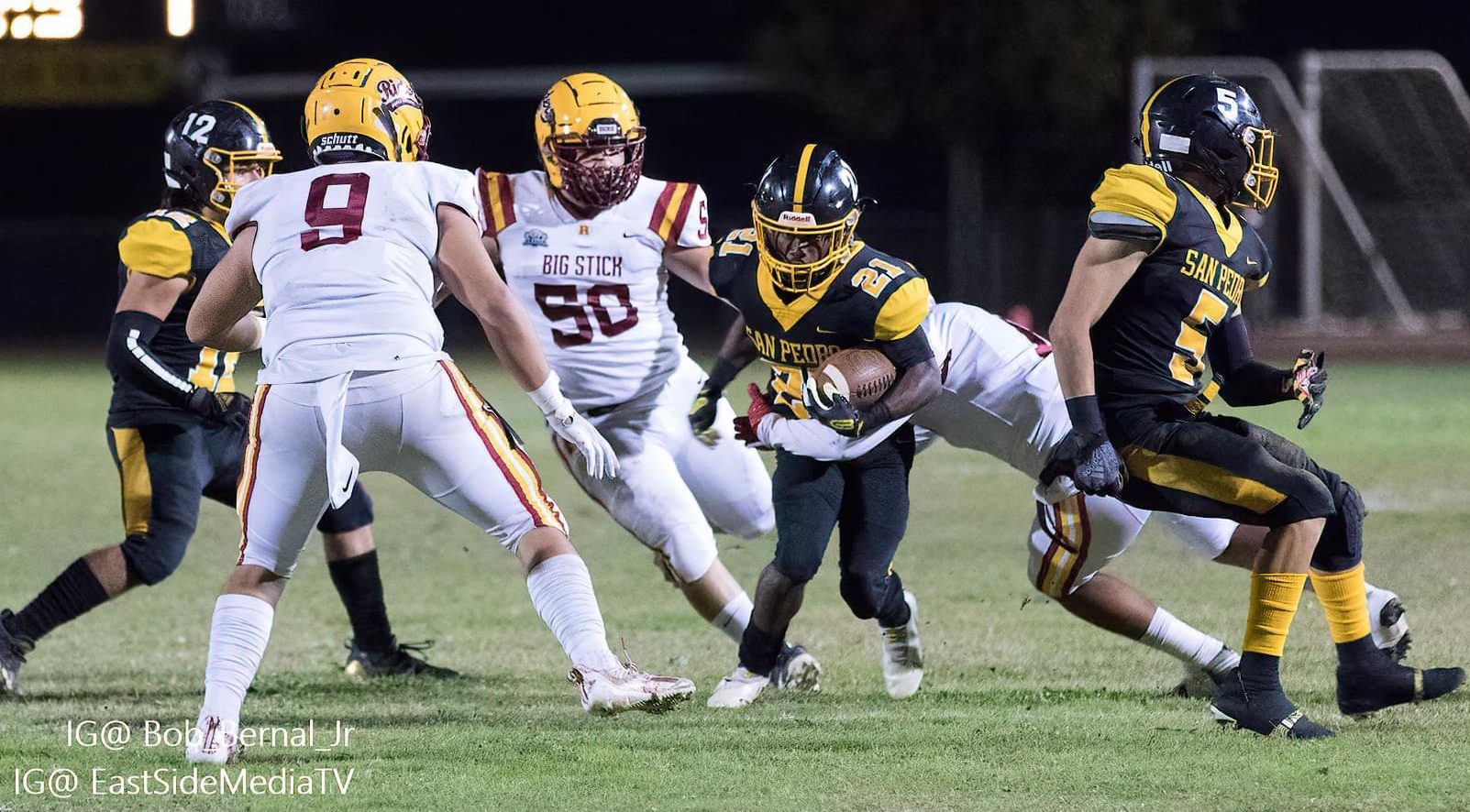 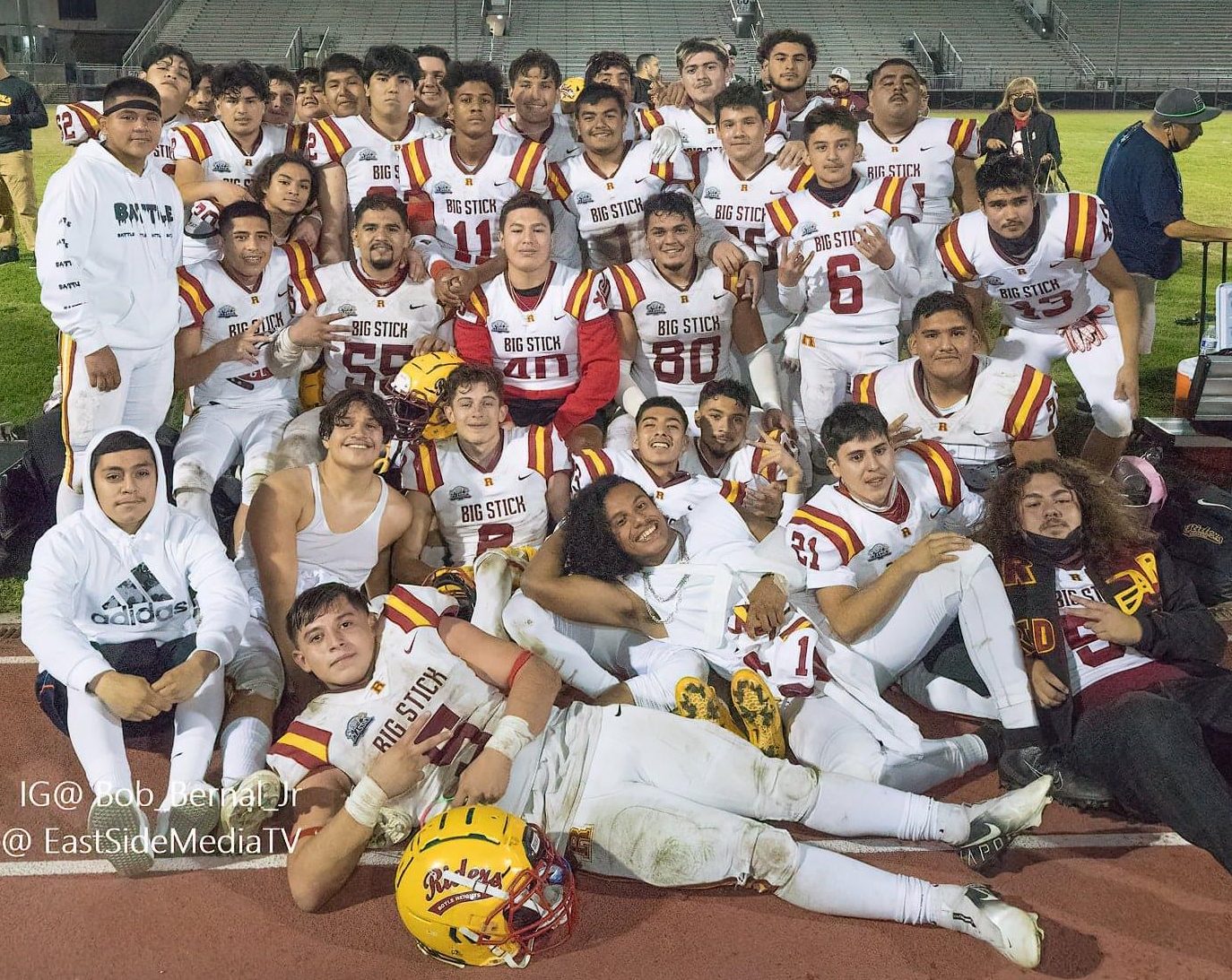 But back to the action..the Pirates were a very difficult match-up for the Riders and Coach Parral, one that they had not seen much of prior to this important game. For starters, there was the roster size of (59) players, their physicality, and the athleticism of their full squad. The overall Pirates’ exponential player differences, the play of their skilled position players and linemen, were outstanding and dominant, just as they were promoted to be. San Pedro’s Head Coach, Corey Miller led his team to their #2 finish in the highly competitive Marine League with an overall record of (8-1) and a league record of (3-1). The Pirates also were ranked #130 in the California State Poll. Coach Miller certainly had his team fired-up and ready-to-go for this critical match-up.

At the end of the 1st quarter, the score was San Pedro 14, Rough Riders 0, with two TDs surrendered on the ground. By halftime it was (28-0) and the scoring margin was accented with great performances by the Pirates offensively skilled position players and their stingy, “3 and Out” defense. The key San Pedro players in this game were Aidan Jackson, Christian Phillips, Kejuan Bullard, Robert Sarmiento, and Sean Buchanan, who all were credited with scoring roles. The Pirates will now take on the #4 seed, Palisades Dolphins in the Semi-Final match-up at home this Friday, 11/19 at 7:00 pm.

The final score was stretched out to (42-0), sending the Riders, especially the seniors, on their bus-ride back home, bruised but not bowed, with the accomplished memories of having played in the school’s “first-ever,” Open Division CIF/L.A. City Section (LACS) playoff game. On the “up side “ of suffering a playoff loss like this, the Rough Riders underclassmen most likely were thinking of a big “off-season” to prepare their school for another return next season, hopefully without the nagging threat of the COVID-19 Coronavirus virus pandemic to blur or cloud the season and the new school year of 2022.

To close out the final chapter in this Roosevelt Rough Riders fantastic and memorable season, here’s how Head Coach Aldo Parral described it.  “We, (Roosevelt), got our first taste of the “Open” Division, and it was a great experience for our program. This gives us a benchmark to reach for, and we look forward to the off-season as we prepare to get ready for 2022.”

“A huge Thank You goes out to all of our Seniors who will always be remembered for breaking the streak, winning the 2021 East L.A. Classic in a ‘classic’ fashion, and proudly bringing the trophy back to our campus and the Boyle Heights community.”

“It was a pleasure working with our first class who accomplished this feat and we’ll be  looking forward to seeing how this class turns out as they pursue their college choices and the professions they choose in life.”

(Special Note From The Editor): If you are a new viewer, we would like to refer you to view a total of (8) Roosevelt games, (in Play-By-Play format), including this season’s “East L.A. Classic” right here on our website and our YouTube Channel. We ask that you subscribe to our Channel for future video productions that we are now in the planning stages of preparing. Thanks again to ALL of our followers and viewers for supporting us during this 2021 high school football season. 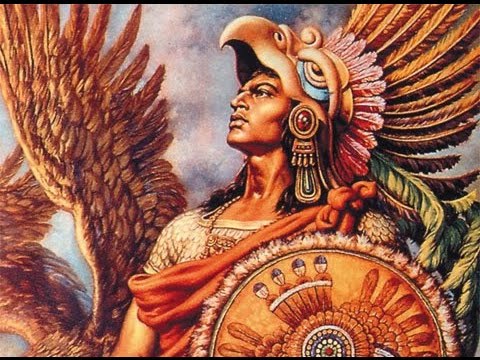 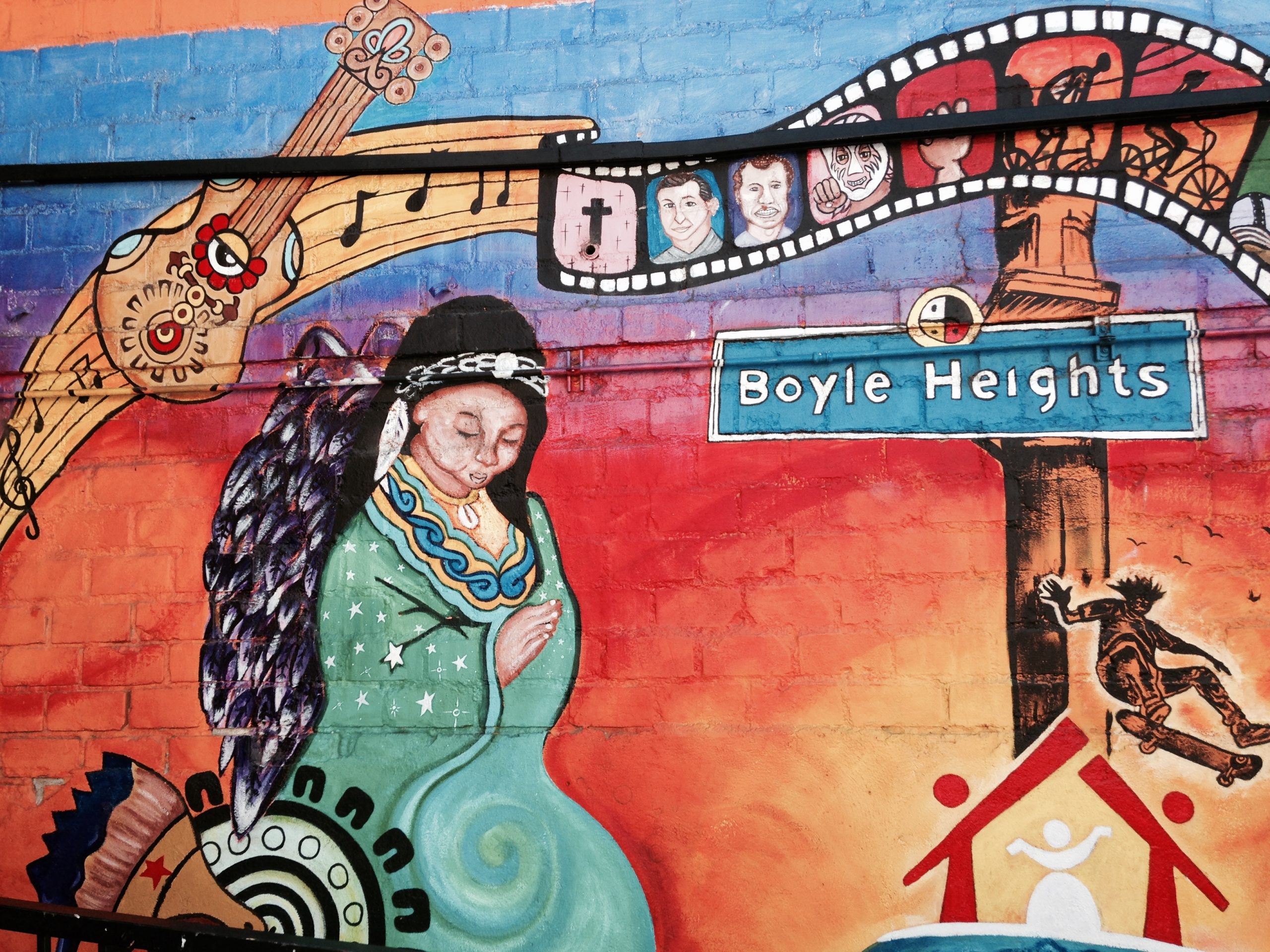