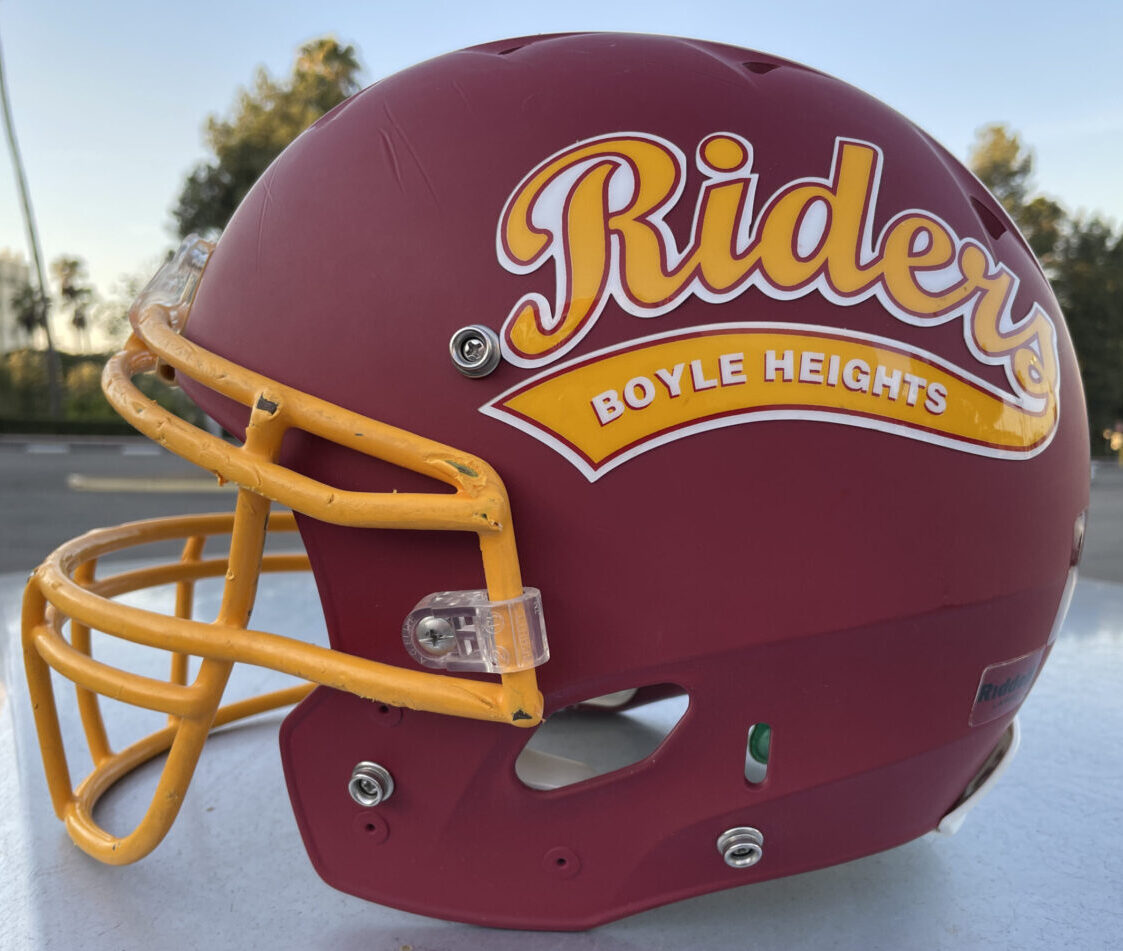 (East Los Angeles, CA) April 7, 2021 [From The Editor’s Desk]: To High School football fans and all of our viewers who have been waiting for a little over a year now, the season, believe it or not, is set to start, even if it’s only going to last for (4) games. Let’s all give thanks for the Orange Tier designation we achieved as a City and County, that led to the easing of the obligated, but necessary COVID-19 coronavirus restrictions, so that now, the final group of our community’s outstanding athletes can perform in their treasured sport of choice.

And so, the official start of the season is just several days away. But before we go there, we want you to stay here and watch our presentation of the Roosevelt Rough Rider’s “Media Day” which took place several weeks ago, on Wednesday, March 24th.

We open up with interviews of Assistant Coaches, Roberto Ortiz/Offensive Line, and Ernesto Ceja/Offensive Coordinator. Then we have these six student-athletes to present to you in the persons of Jimmy Romero/RB-WR, Damian Avalos/QB-DE, Benjamin Reyes/OL-DL, Vicente Zepeda/RB-CB, Emmanuel Villagra/OL-DL, and Julian Quezada/RB-DB. 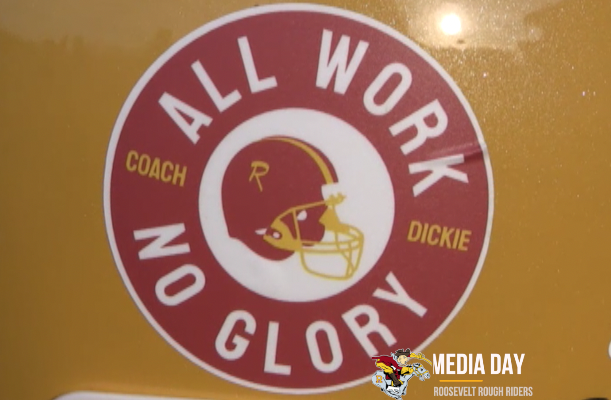 As an extra piece to the Players and Coaches, we’ve included the three caring and wonderful daughters of Rough Riders Legacy Coach, Richard “Dickie” Guillen. In this order, you will meet Jennifer (eldest), Denise (middle), and Virginia (youngest). They will share their Dad’s final family and friends tribute, as well as a most memorable gesture agreed upon by the school, which was to allow the placing of a helmet decal “En Memoriam” of Coach Guillen’s very reflective and impactful mantra to his players,“All Work and No Glory!”

We’ll close our Media Day interviews with third year Head Coach, Aldo Parral, as he informed us of his team’s preparation for the season and its two allowed scrimmages, the first against the Western League’s Venice Gondoliers @ Venice, last March 27th, and the second, against the Northern League’s Wilson Mules at home, last week on April 3rd. He’ll also give us the explanation of why rival, the Garfield Bulldogs, opted out of playing this Spring season in the Eastern League, and chose to play their shortened season as an Independent school. He closes out his session by speaking about his recently departed, beloved friend, and former Offensive Line Coach Richard “Dickie” Guillen.

Click here or on the graphic below to subscribe for $10.99 per month to the NFHS Network’s Live Stream Platform for this season’s three Roosevelt High School football games. 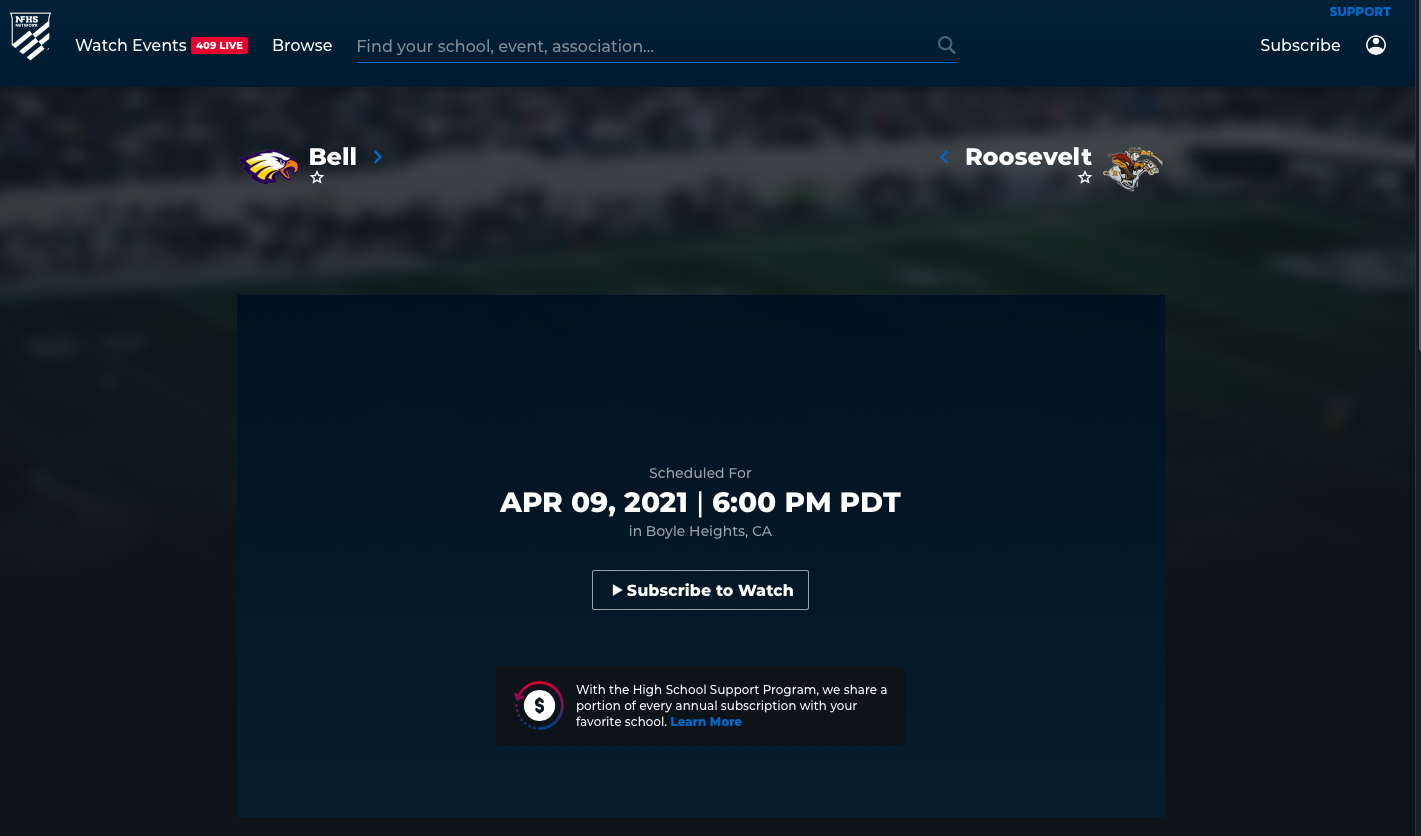 The Riders first Eastern League game of the four game season will be this Friday, April 9th against the Bell Eagles at home. Their second game will also be at home versus the Huntington Park Spartans scheduled for the following week on Friday, April 16th. Both “Kick-offs” are set for 6:00 pm. All COVID-19 Public Safety and Health protocols will be followed. Unfortunately, no fans, except for (2) parents or (2) family members of each player, will be allowed to watch the game in-person. Face coverings/masks are required at all times as well as safe distancing and seating in the stands.

To accommodate all other Rough Rider Fans, its student-body, Alumni, Administrators, Teachers, and the Community, we will be “Live Streaming” these first two Home games as the NFHS Network Affiliate, just as we did for the 2019 season.

The Rough Riders third game will be on the road against the MAywood Center for Enriched Studies (MA.C.E.S.) on Friday, April 23rd. The fourth and final game of the season will be on Friday, April 30th for the Eastern League Championship when the Winner of Group A meets the Winner of Group B. Roosevelt is a member of Group A. More details on that game and the 2nd & 3rd place finishers in both groups will be provided at a later date.