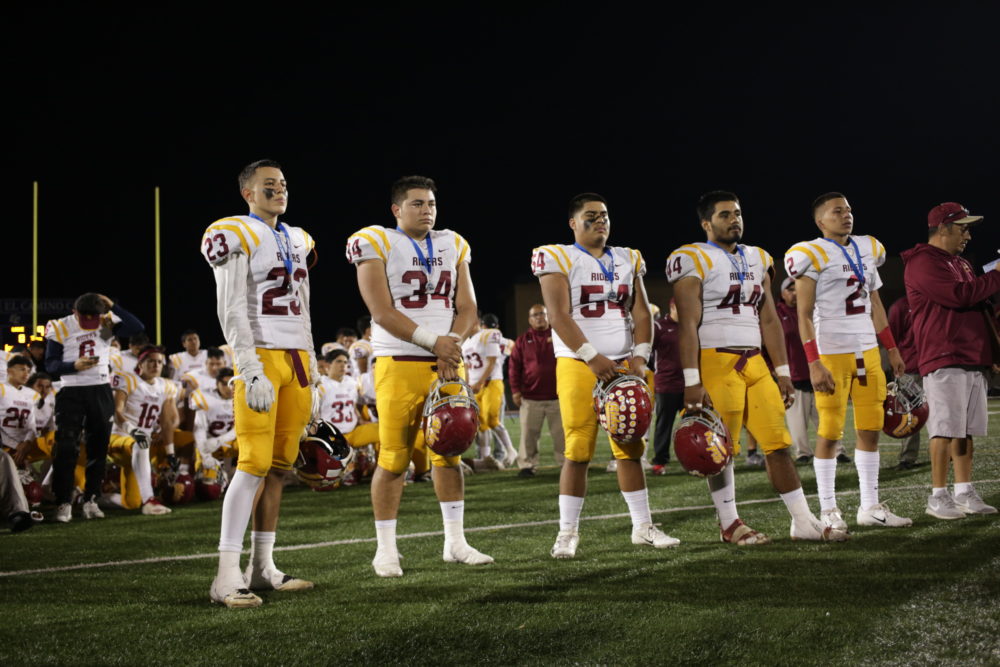 representatives of the Eastern League, were defeated by the Locke Academy Saints and the Narbonne Gauchos in the CIF-L.A. City Section’s Division II and “Open Division” Final games respectively. Both games were played on Friday, 11/23, under great weather and field conditions, at the Section’s official Football Championships playing site, El Camino Community College, located in  Torrance, CA.

In a closely played game, the Rough Riders trailed at halftime by the score of (15-14). The Locke Saints made their 1st quarter two point conversion stand as the difference maker as the game wore on. In the end, the Riders were defeated by just two points, (22-20) after they made a desperate last minute comeback. Their season came to a valiant close as JR/QB/#5 Andres Flores’ 30 yard pass intended for JR/WR/#8 Angel Ochoa, was intercepted at the two yard line as the final seconds on the clock were running down, by Locke’s SR/CB/#2 Donta Limbrick. 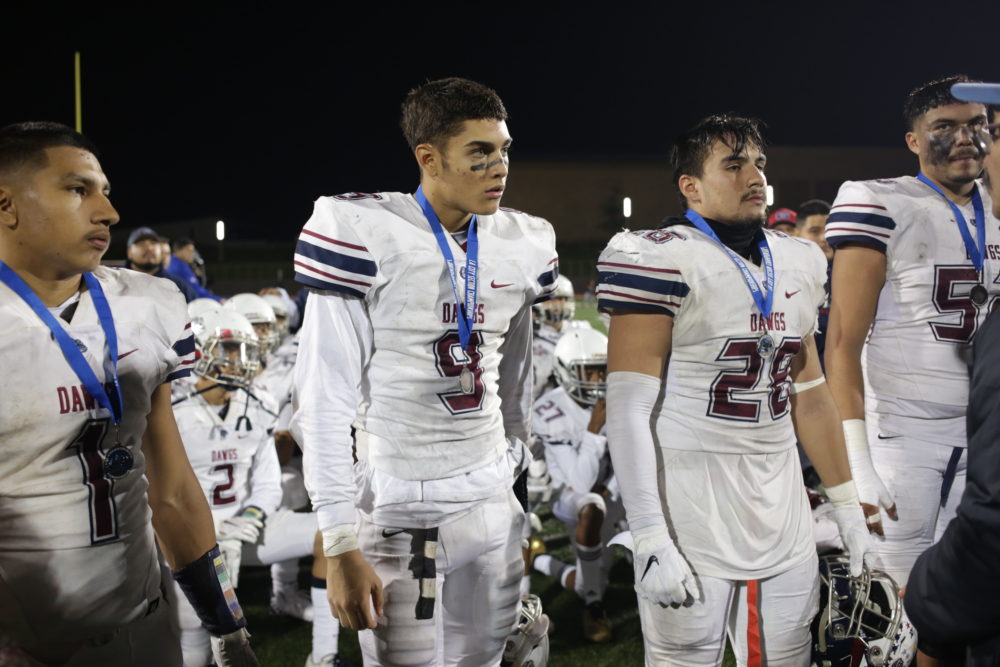 The Bulldogs started off surprisingly well, scoring on their second possession of the first quarter when SO/QB/#18 Jonathan Bautista, at the (2:16) mark, took off on a roll-out to his left, found no tacklers in sight, and scampered in from 11 yards out for the first TD of the game. The Fabian Muñoz-Rodriguez PAT was good. However, the Bulldogs’ lead was short-lived because the Gauchos, on the ensuing kick-off ran it back 90 yards for a TD and a PAT to tie the score at (7-7). With that one special teams play, the Gauchos ignited their war machine and went on to dominate the game as they won by the final score of (55-7).

Our followers have two options to view both games in their entireties. First, you can subscribe now by going to NFHSNetwork.Com. Your subscription fee will be $9.99 per month. Your subscription will entitle you to watch “Live Streams“ of many high school sporting events from around the country  You can unsubscribe after 30 days with no penalties. Or, secondly, you can watch them for FREE by registering with the NFHSNetwork.Com on Monday, 11/26.

At this time we are very glad to announce that the Bulldogs will continue their playoffs season in the 2018 CIF State Football Championship Bowl Games – Division 4-A / Southern California Regional Championship next Saturday, 12/1 when they will host the Robert F. Kennedy HS “Thunderbirds” (13-1) from Delano, CA., located in Kern County. Kick-off is set for 6:00 pm. Tickets for the 2018 CIF Regional Football Championship Bowl Games are available at host sites. Ticket costs are $12 for adults and $8 for high school students (with a valid ASB card), seniors (65+) and children. If you cannot attend the game, please be advised that the game will be “Live Streamed” on the NFHSNetwork.Com.

Should the Bulldogs win, they will play for the CIF State Division 4-A Championship on 12/15. Location and Kick-0ff time will be announced at a later date.