(East Los Angeles, CA) September 15, 2021 [From The Editor’s Desk]: The Roosevelt Rough Riders’ bus ride on one of the busiest freeways in the country, the (10 East), Santa Monica Freeway, to and from the campus of Dorsey High School, located in the Crenshaw District of Southwest Los Angeles, last Friday, 9/10, turned out to be a very happy, memorable, and positive one as the team notched its second convincing win a row over a Coliseum League opponent. 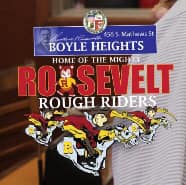 This “Friday Night Lights” road game, complete with Cheer, Band, and supporters ranging from students, to parents, to community supporters, were witnesses to a very tough, hard-fought, yet convincing, and offensively entertaining triumph over the undefeated Dorsey Dons.  The home team came in with a (2-0) record and were led into the pristine Jackie Robinson Stadium, located in the City of L.A.’s Rancho Cienega Sports Complex, by their second year Head Coach, Stafon Johnson. He was the All-City, highly recruited Dorsey grad, outstanding USC player, and former NFL player, who is gradually bringing his program back up to the level of its legendary Head Coach, Paul Knox during his era.

In addition to watching the entire game, with our “Play-Play” delivery, and our post-game interviews with Head Coach, Aldo Parral, and first-time player interviews with Fullback/Alexander Arroyo, QB/James Cortez, and CB/Chris Beltran, we have the story to go along with it. Let’s go now to our recap.

(Game Perspective): The first half was a slight glimpse of how the game would balance itself out in respect to game-changing plays, both on defense, with fumble recoveries, and on offense, with TDs. Add in the assessment of critical penalties, great Riders Special Teams coverage, and multiple “Big Plays” made by “Big-Time Players” and there you have the bigger picture of the game.

(Game Summary): {1st Qtr}: The first score of the game occurred at the  (5:35) mark, when Dorsey’s RB/#8 Tyler Williams, dived over his left tackle and just across the goal-line on a one-yard plunge. The traditional point-after conversion (PAT) was good by Ernesto Avalos for a (7-0) Dons lead.

{2nd Qtr}: In this period, the Rough Riders “double wing” running attack began to get going and at the (6:03) mark, SR/RB/Julian Quezada, rolled into the end-zone on a three yard run led by his big linemen, who opened the right side just enough for him to slip through the Dorsey defenders. The score was now Dorsey 7, Roosevelt 6. Then, just before the half would end, at the (1:12) minute, JR/RB/Johan Alfaro got Coach Parral’s call and busted loose for a long 30 yard TD run. This brought the Roosevelt faithful, who were in attendance, to their feet. The conversion failed and the score remained (12-7) Riders, going into halftime.

Two “key” plays occurred in the period that bear strong mentioning. First, CB/Chris Beltran made an incredible interception at the goal-line after he tapped it away from the Dorsey receiver. Then, while falling to the ground, he somehow managed to grab it with both hands for the INT. The second play was a perfectly executed “on-side” kick by Kicker/Angel Nolasco that was recovered easily by #4 Jared Andrade. It also served as a big confidence builder for this Special Teams unit, as they are becoming masters of executing it to perfection. However, time ran out before the Riders could mount another scoring drive. 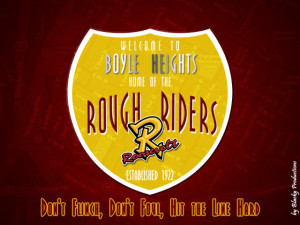 {3rd Qtr}: It was also good to see that Coach Parral has added some extra passing and running options to his playbook, giving his QB/Cortez, more involvement in the play calling aspect of the game.

In this period, more scoring action took place as the Riders pushed the “pedal to the metal” and once again, scored with their running game. This time JR/RB/Jared Andrade put up his first of three TDs when he found the seam made possible by the “O-Line” and went behind his blockers, scoring on a 15 yard “toss-right” play call. The point-after was missed. This TD came at the (6:46) minute mark and moved the score to (18-7), Rough Riders.

{4th Qtr}: After allowing Dorsey its first TD in the first quarter, the Riders defense played a stellar game and denied the Dons any more scoring opportunities for the remainder of the contest. Stepping up to make crucial stops and hurries were LB/Alexander Arroyo (with two timely sacks), Jared Andrade, DE/Ben Salinas, Nose Guard, Daniel Cuevas, TE/Luis Vazquez, and Jimmie Morales to name a few players.

But back to the offensive action and at the (5:50) mark, Andrade scored his second TD of the half on another five yard “toss-sweep-right” run. But again, no luck on adding the PAT. The score was now (24-7), Roosevelt. To close out the scoring, at the (1:28) marker left in the game, Andrade added his third TD of the night with another five yard run, leaving the final score at (30-7), Rough Riders. The PAT was missed. And the bus ride back home would be a celebratory and joyous occasion for the Rough Riders.

(Of Significance): Roosevelt finishes their 2021 CIF/L.A. City Section (LACS) Pre-season with a very respectable record of (3-1), their only defeat coming in Week #2, when they came up short against the Northern League’s Lincoln Tigers. That score was (22-14).

(Next Up): At Legacy, (South Gate) in the Eastern League opener, on Friday, 9/17. Kick-off is set for 7:00 pm. Our next Internet game coverage will be against Huntington Park when they come to Roosevelt on September 24th.