(East Los Angeles, CA) August 30, 2021 [From The Editor’s Desk]: This MLS Heineken Rivalry Week match featured the one and only,“El Tráfico” soccer/fútbol clash between LAFC and its cross-town rival, the L.A. Galaxy. It had been highly-expected and much-anticipated as the bragging rights to the best team representing the City, and/or County, (depending on how you view the geographic residences of fan-bases) was about to be settled, at least on this day. Both teams took to the 4:00 pm kick-off in the sun-drenched pitch at the increasingly popular Banc of California Stadium and prepared to do battle.

(Match Preview): Unfortunately for their fans and clubs, there would be No Carlos Vela for LAFC and No Chicharito Hernández for L.A. Galaxy. The Team Records reflected LAFC stranded in 11th place, while LAG was holding firm in 4th place in the Western Conference. In disappointing style, the large contingency of the visiting LAG fan club showed little tolerance for the singing of the National Anthem by Grupo 3252. The teams’ rivalry for this match was clearly displayed by the inappropriate gesture, while many other fans did their best to comply with the traditional observance. 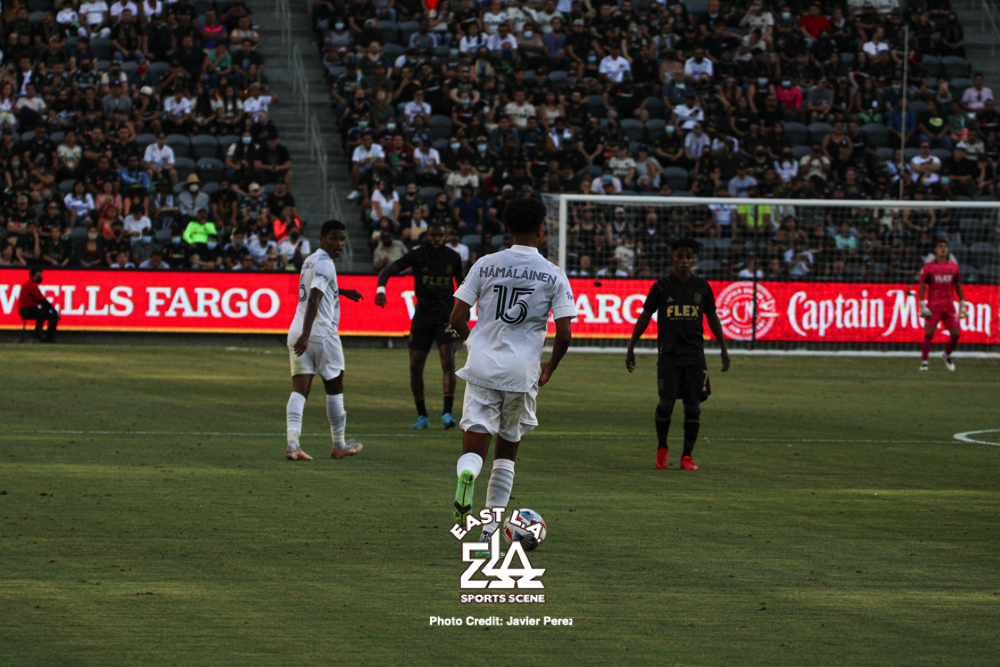 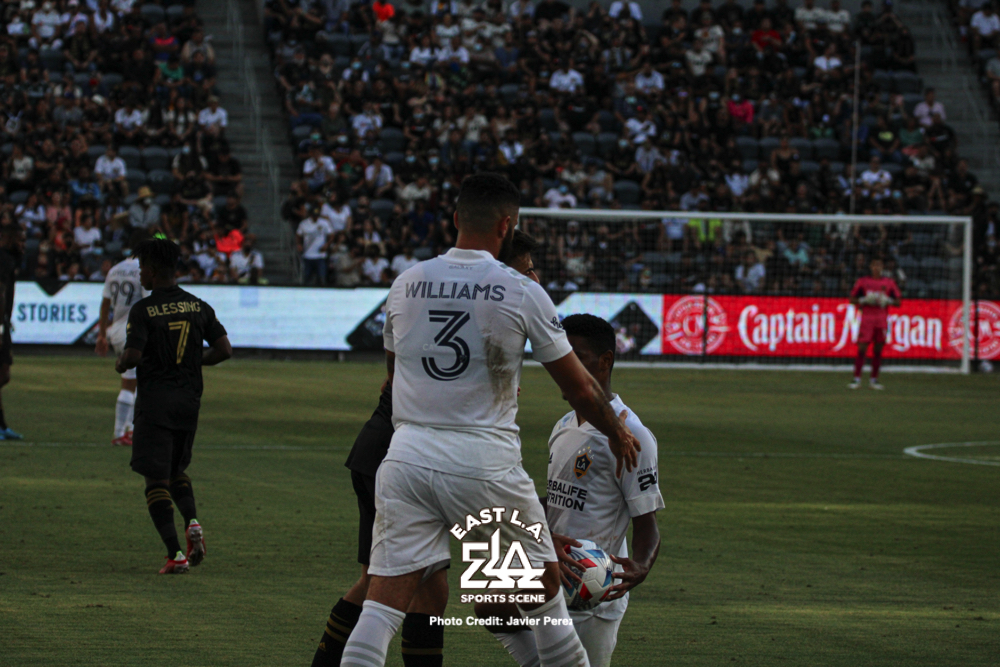 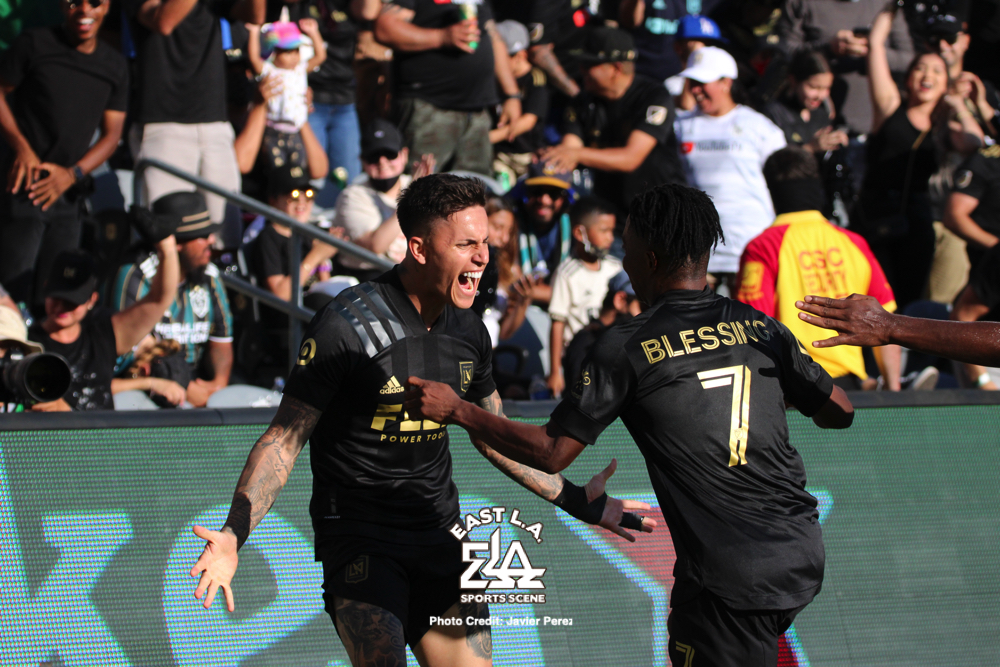 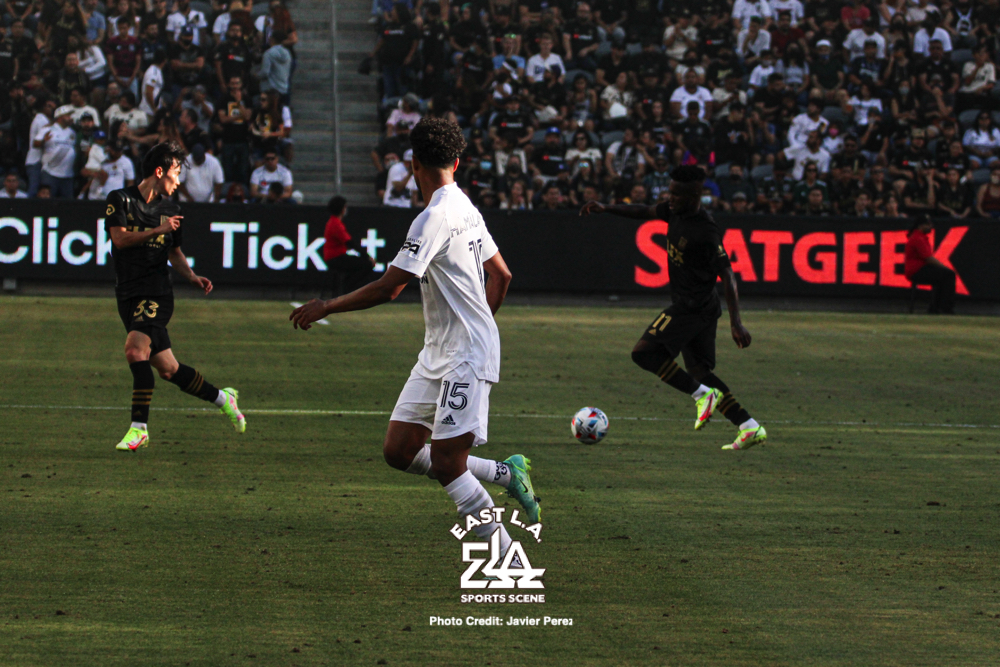 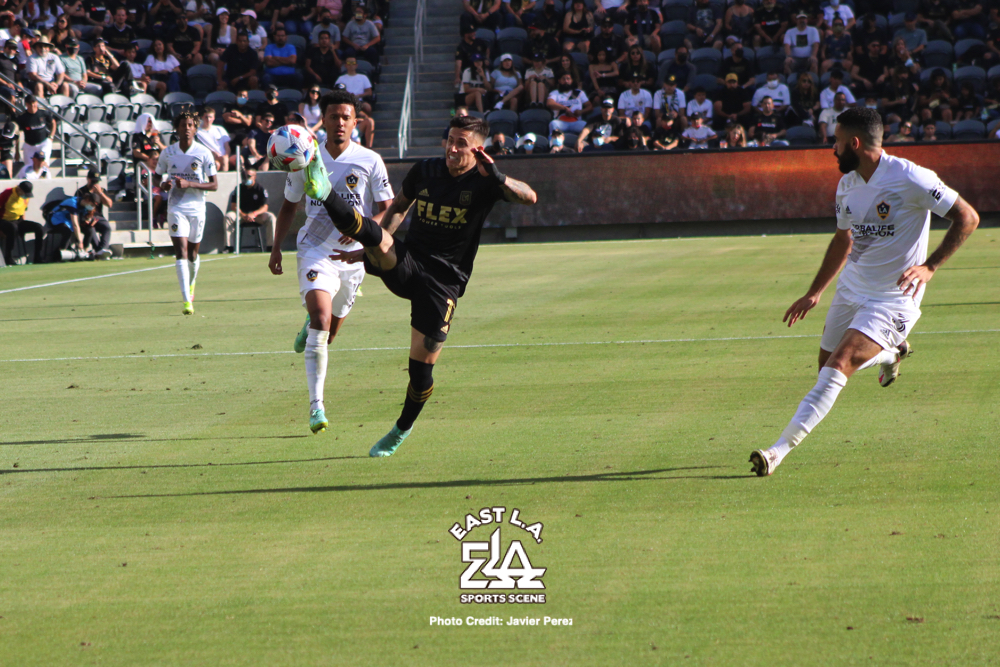 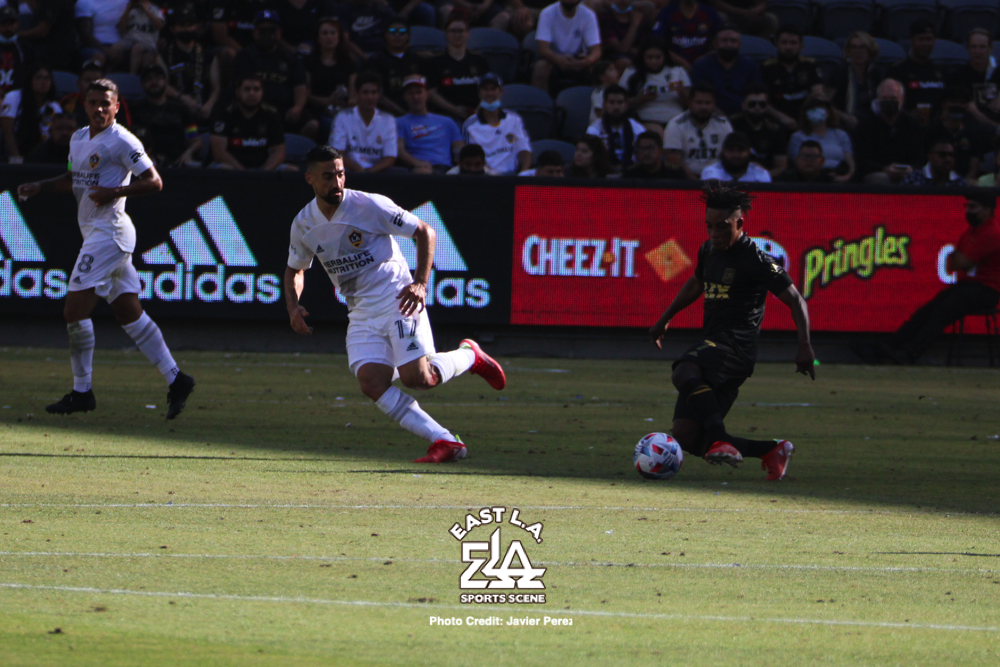 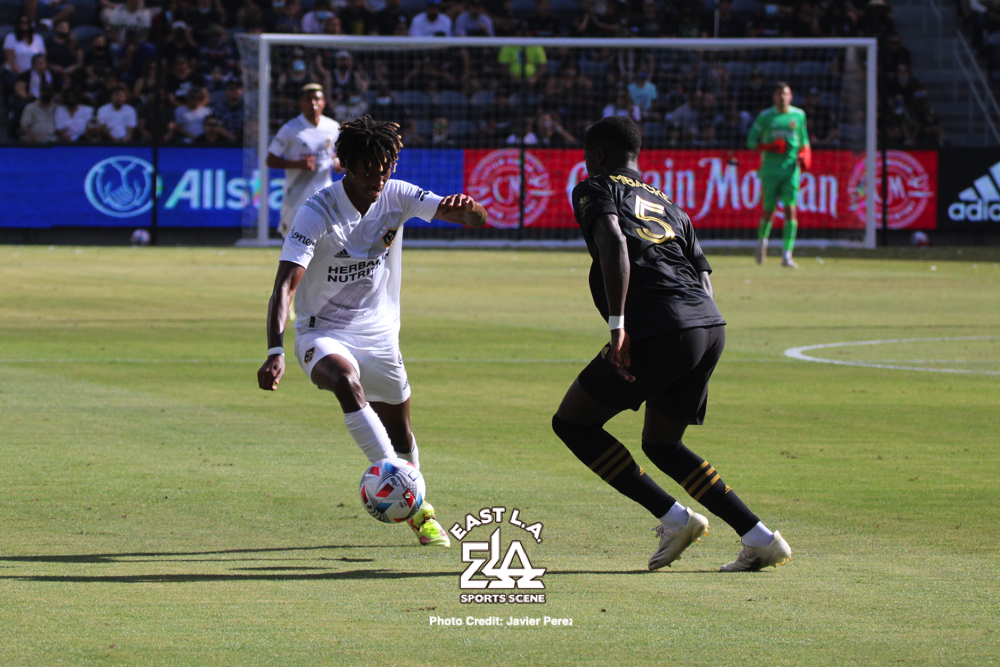 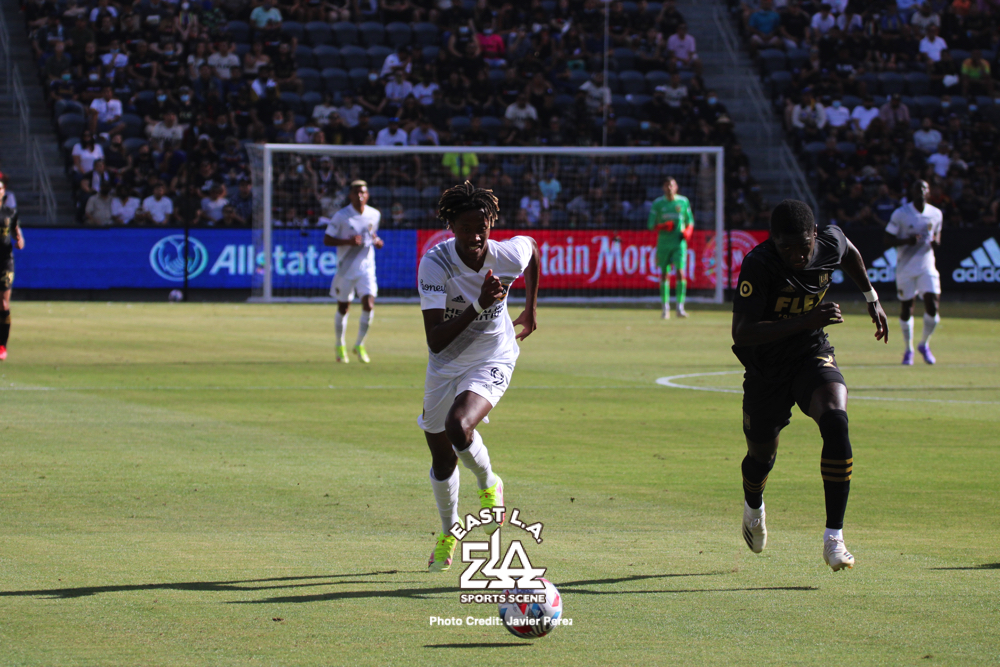 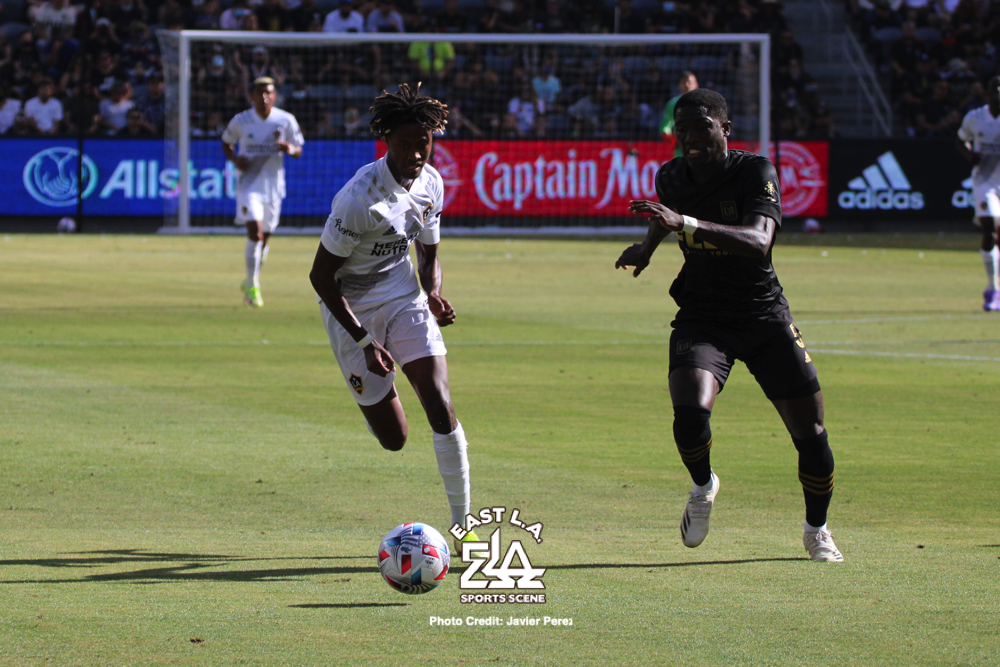 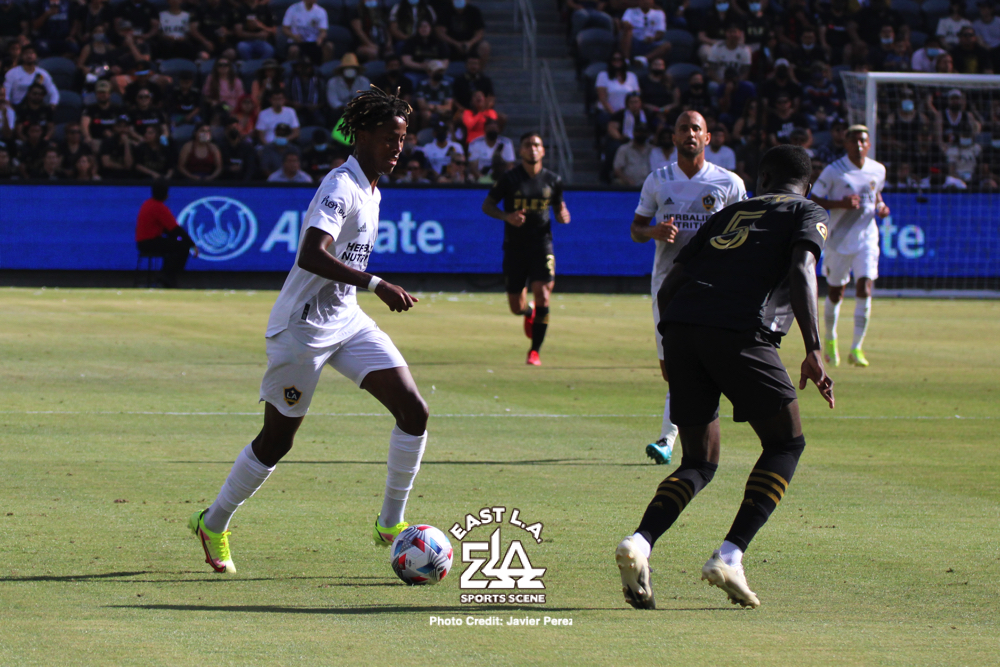 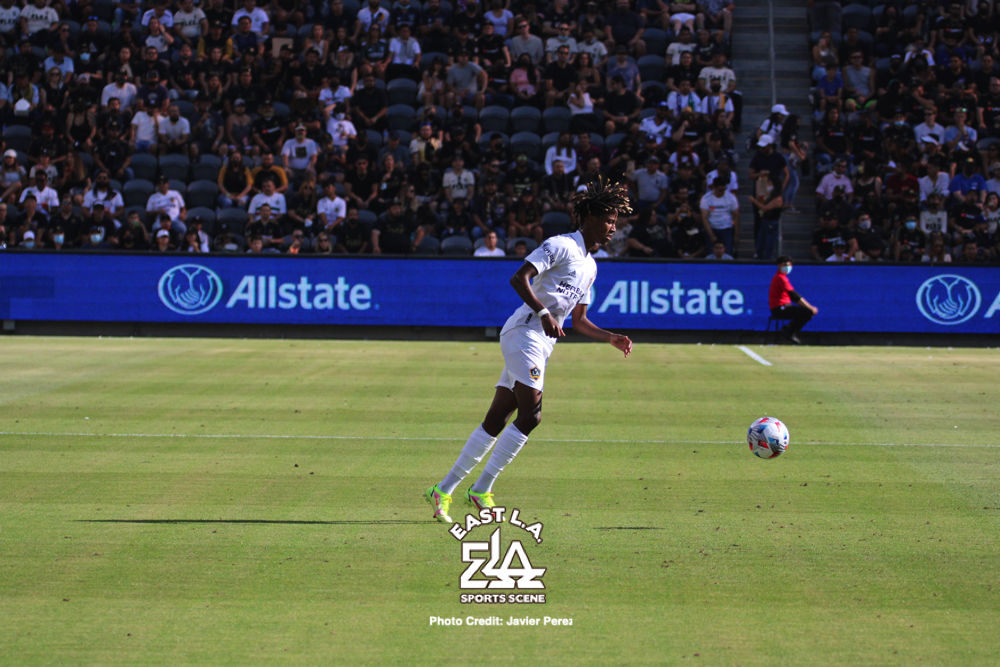 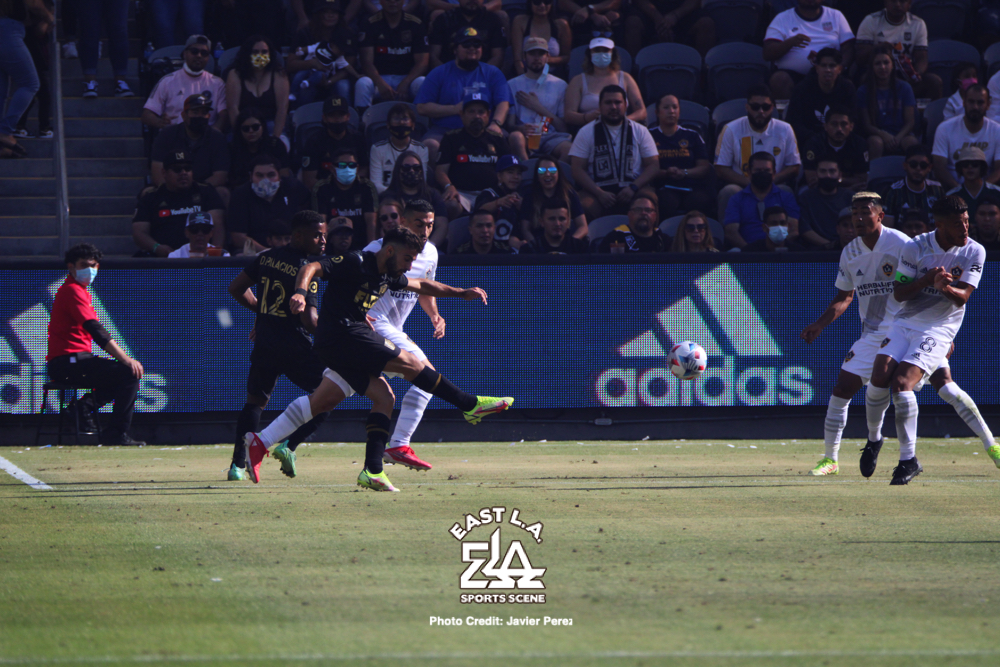 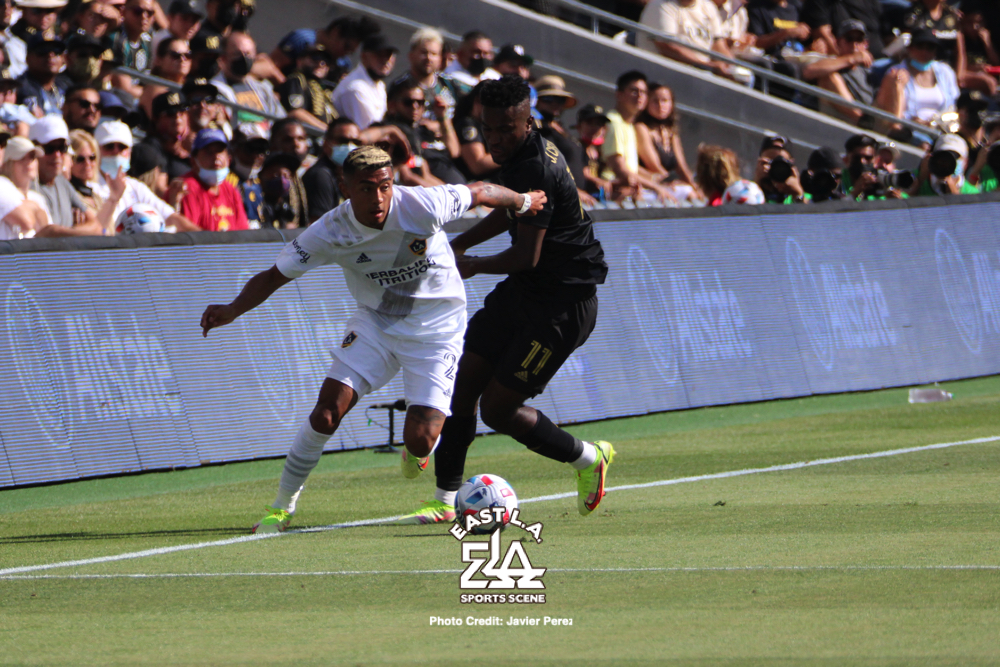 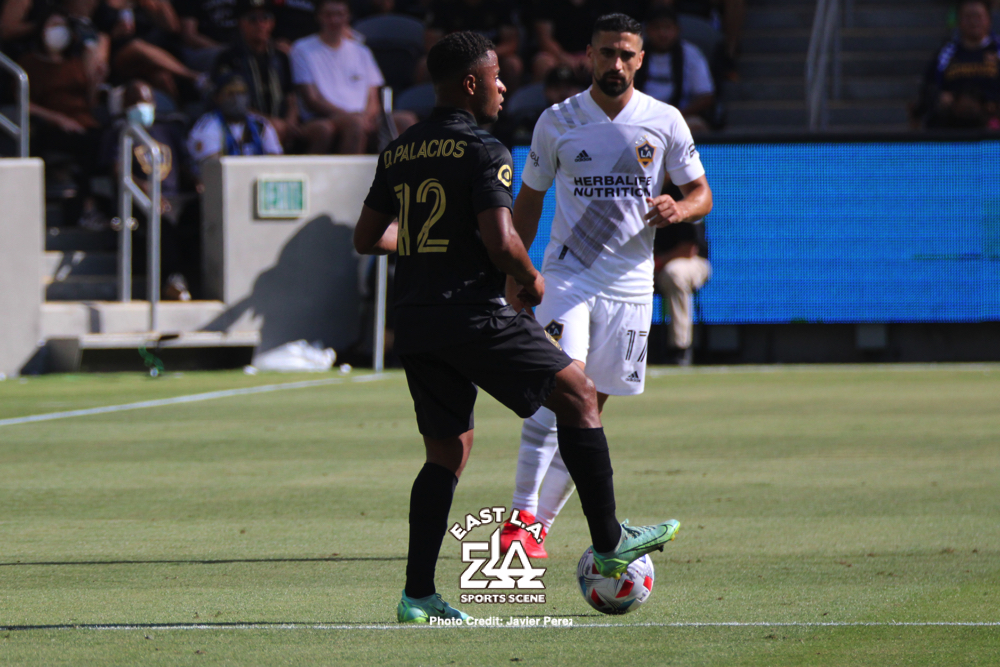 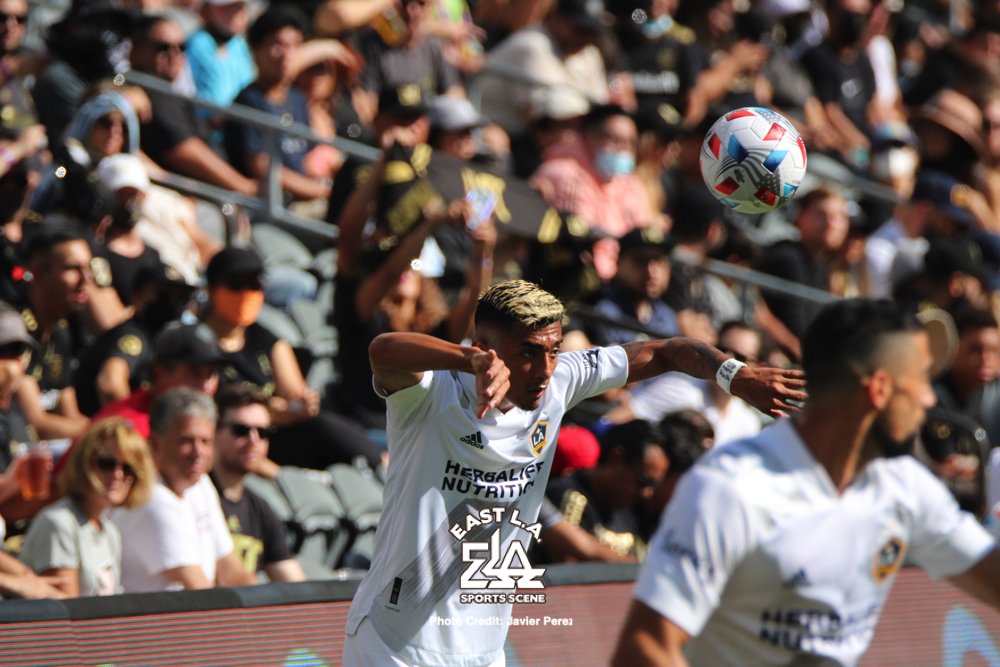 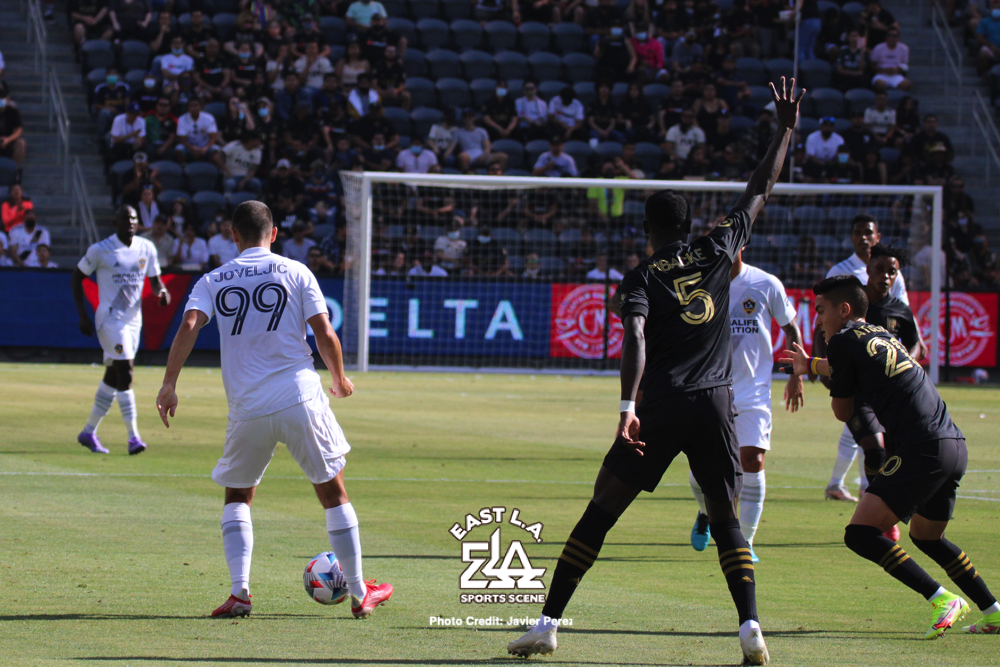 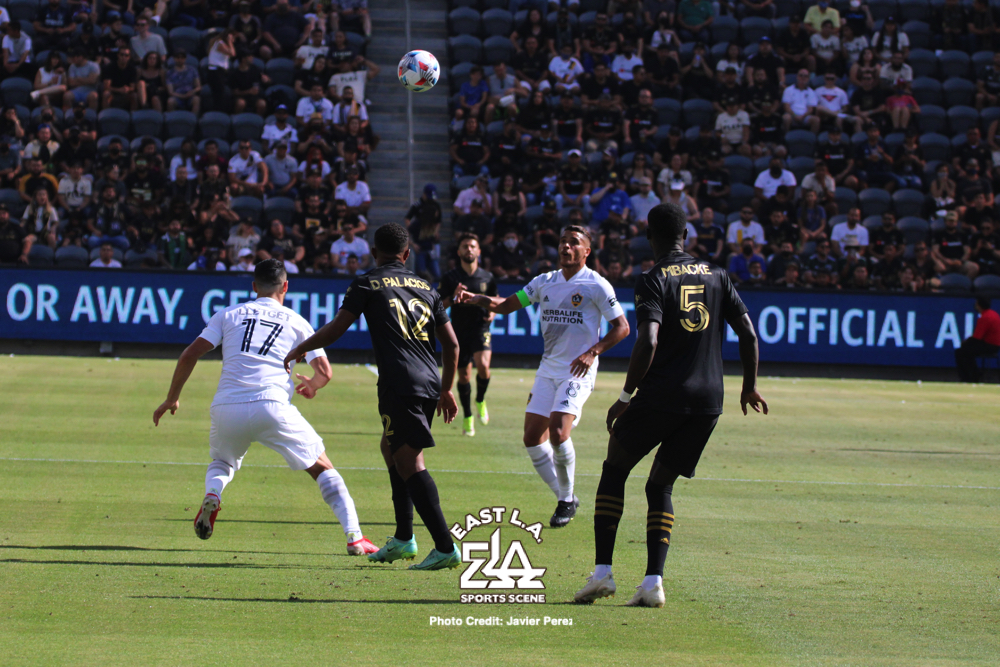 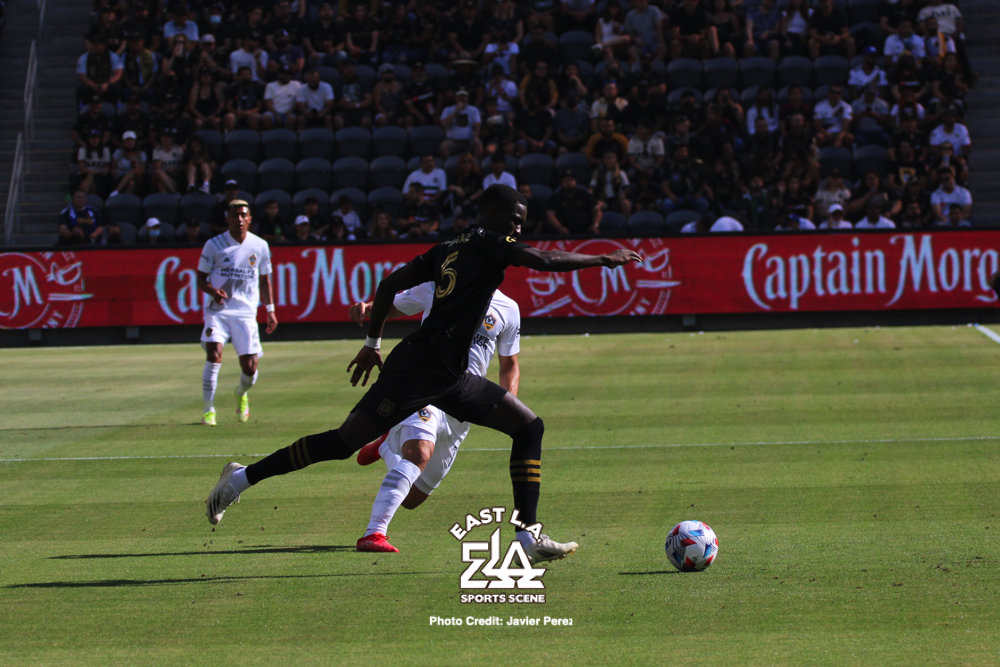 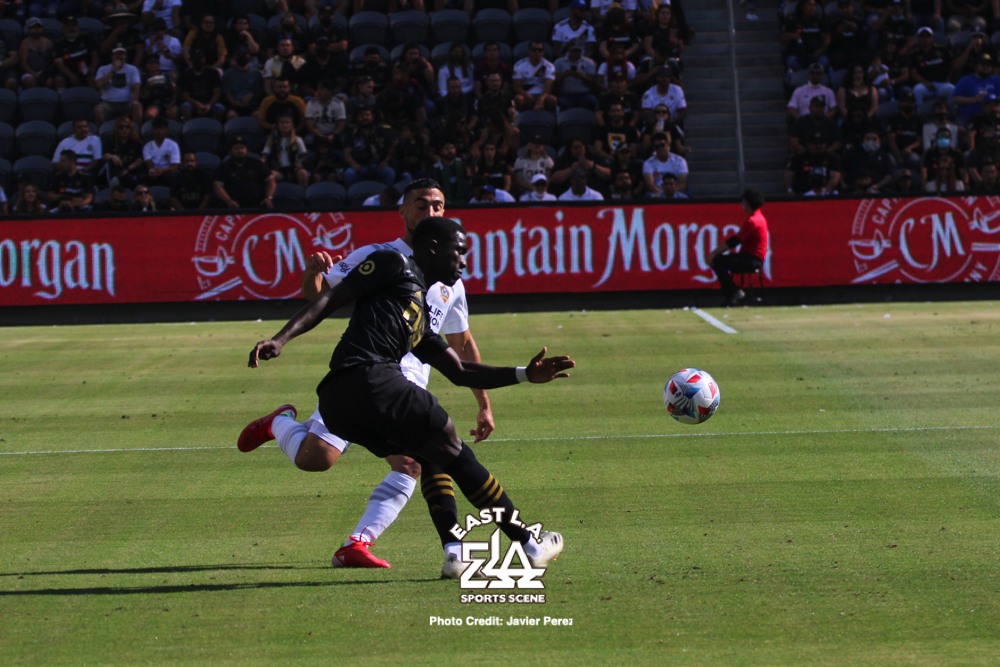 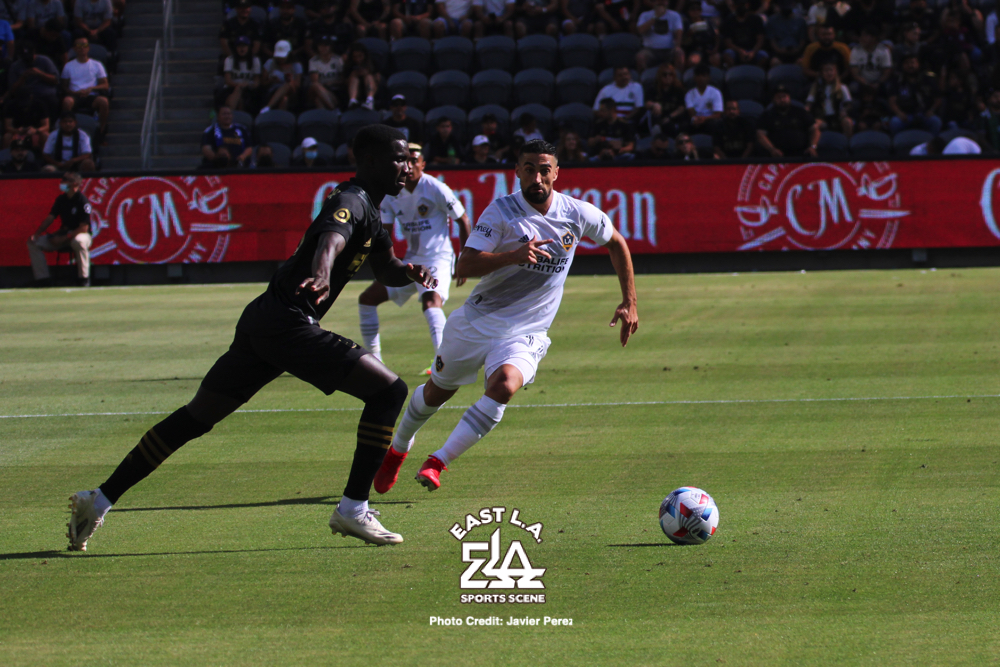 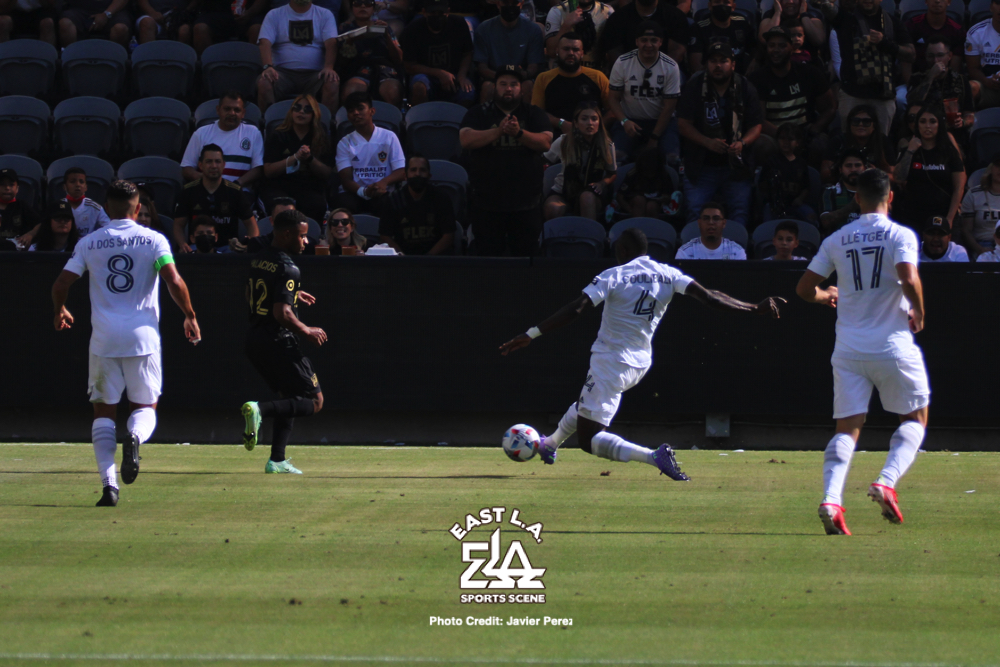 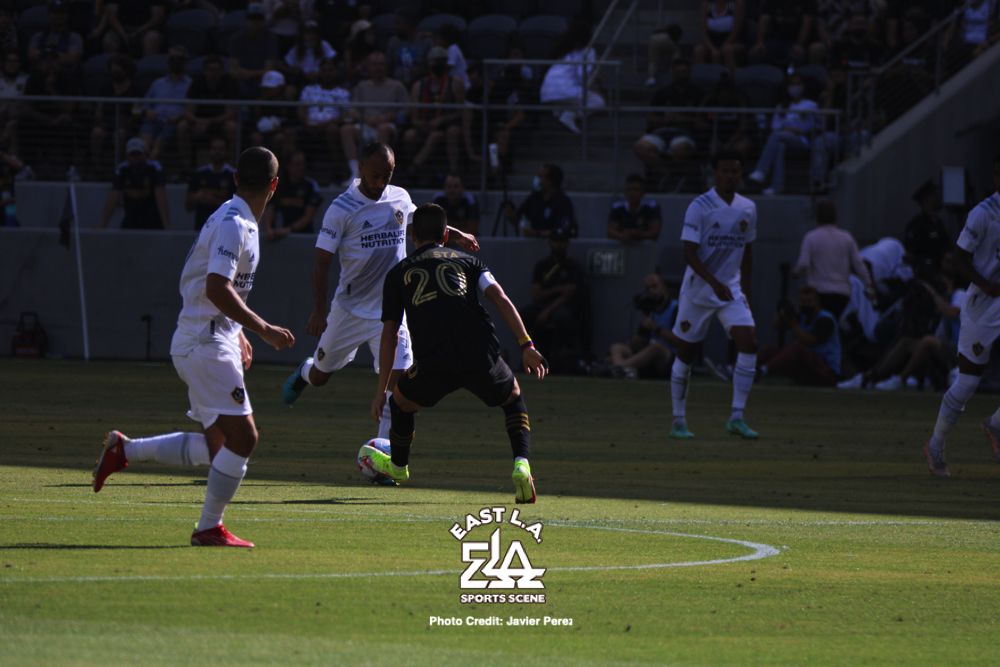 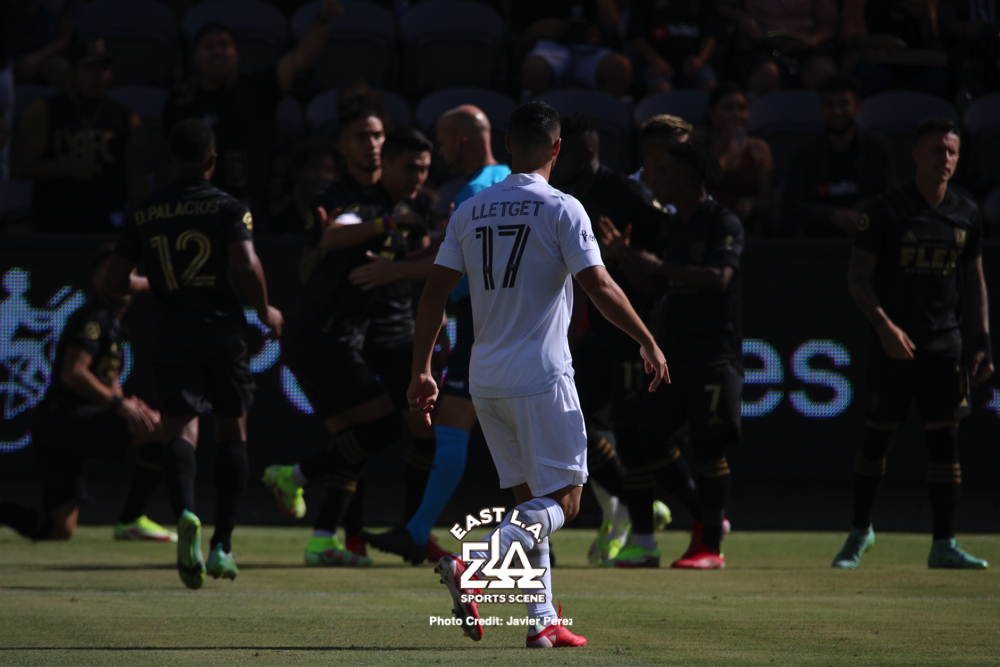 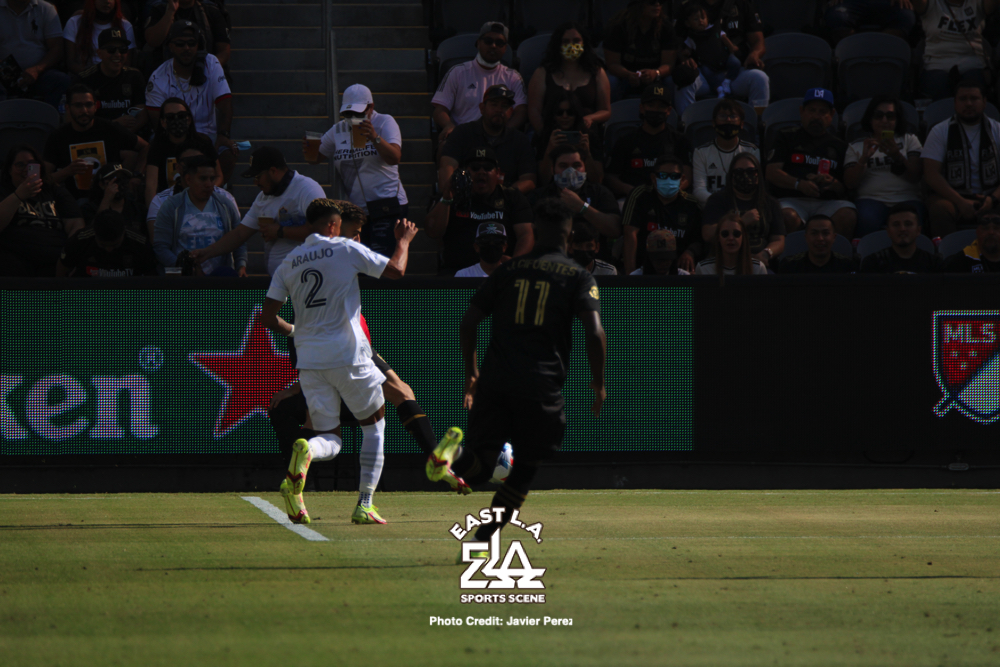 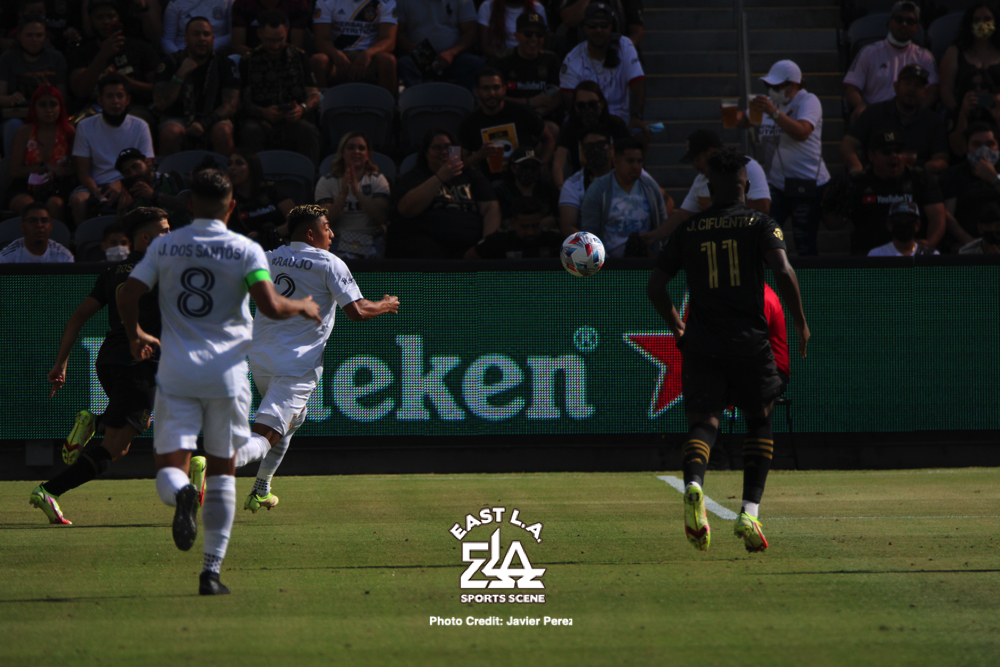 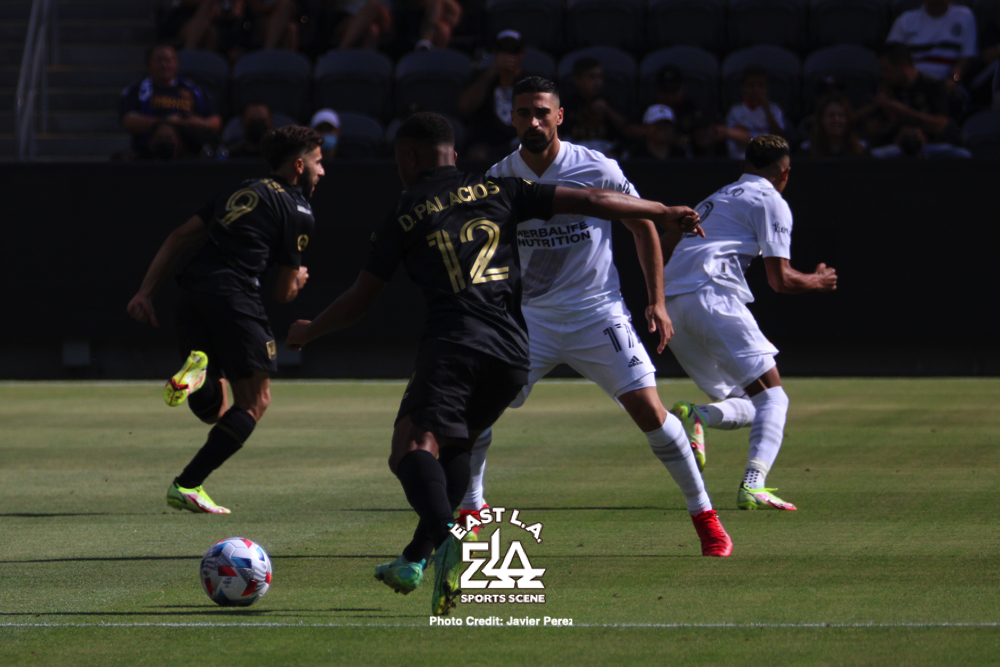 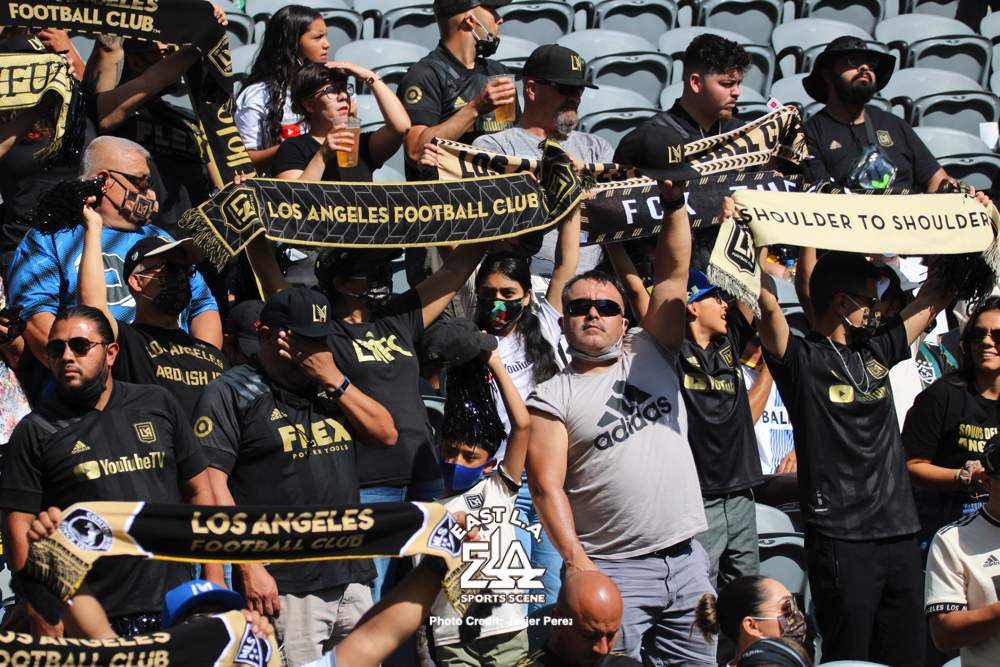 The weather condition at Kick-Off was a bright sun and a summery hot 86 degrees, causing the temperature on the pitch to be scaled to at least 92. After taking control of the first pass and possession of the match (with only 20 seconds elapsed), the Black & Gold pressed into attack mode, when Diego Rossi was fouled from behind on his drive to the goal. He was awarded a penalty kick but couldn’t convert it into a score.

(Signifcant Match Action): After that foul, it went back and forth for the first 9 minutes. LAFC had more “shots on goal” than LAG. The play-phase time spent in their opponent’s front attacking zone was just about equal. Then suddenly, the first goal of the match occurred at the (19:40) mark, when the Galaxy’s Dejan Joveljic trickled in a grounder that had glanced off the side of #94, Jesús Murillo. It then lazily dribbled into the right side of the unprotected net, (1-0), Galaxy.

Finally, at the 44th minute, LAFC’s Cristian “Chicho” Arango earned a penalty kick from the 12 yard spot directly in front of the goal and nailed it to the far right corner, tying the match at (1-1). The goal was his first as a member of the team. The crowd emotionally felt a big load taken off its back with that score. Some two minutes of stoppage time was added. To finish out the period, the Black & Gold almost scored again with a behind the back, short rolling-footer assist, but it was broken up at the last second.

To view the highlight video of the match, please click here.

The second period began  with an intensity that hasn’t been seen in awhile when the LAFC put on its “quick strike” attack shoes. Then, in coming out of nowhere, #17 Brian Rodríguez performed his “1-on-1” magic with the delivery of a nearly impossible angled shot that managed to give them the “go-ahead” goal, (2-1), provoking a gigantic roar of approval from the Black & Gold’s incomparable and delighted cheering section, Grupo 3252. The score came at the 47th minute mark, barely two minutes into the period.

But the Galaxy would answer right back at the 64th minute when Dejan Joveljic, once more found the netting for a goal. This tied the match at (2-2). Next, at the 67th minute Rodríguez chipped in a carom from a Diego Palacios shot that came off of the Galaxy’s goalie, Johnathan Bond, from the right side, for his “back to back” and what seemed like “lightning” goals. Once again, Grupo 3252 was absolutely overwhelmed with joy as their confidence and hope for a much-needed victory was felt to be in their grasp. Thus, the “shoot-out” was growing rapidly with the Black & Gold taking the lead (3-2) on Rodríguez’s goal.

Give credit to LAG’s road fan-support group as they never relented with their enthusiasm and support of their team, even as they trailed going into the 70th minute. In the final 20 minutes of the match, both teams kept up the pressure on each other with LAFC valiantly protecting its narrow lead, while the Galaxy was desperately trying to tie the match, yet still hoping for a final laser-focused push to steal this “road” win late in regulation or in stoppage time.

And then, in the blink of an eye, the visitors somehow coaxed LAFC to lower its defensive posture as they pressured it to draw apart. Then came a well-placed, and match-equaling strike by Kevin Cabral off an assist by teammate, Julian Araujo, from the center of the box that ricocheted off Jesús Murillo, then hit the upper crossbar to drop in, moving the score to (3-3). This came at the 86th minute.

(Next Up): Sporting Kansas City, Friday, 9/3, at 7:00 PM, Banc of California Stadium. And by the way, glowing and positive remarks are still coming in from its recent hosting of the 2021 MLS-All-Star Game. To Watch on National TV, go to: UniMas, TUDN. For Live Streams, go to: BallySports.com, & Bally Sports App. To Listen: 710 AM ESPN; 980 AM La Mera Mera; & Twitter (English audio).