(East Los Angeles/Boyle Heights)—The CIF/L.A. City Section’s, Boys Varsity Basketball, Division II “Coach of the Year”  honors have been awarded to Mario Perez, Roosevelt High School. Coach Perez, completing his eighth year as Head Coach of the Rough Riders, took his heavily branded “underdog” team to a miraculous finish of the 2020 Eastern League by playing solid and fundamental basketball, in defeating foes, Legacy, Huntington Park, and ending with their gigantic rivalry win over the Garfield Bulldogs at home on 2/7. This gave them a (7-5) league record and a fourth place standing in League play. They ended their regular season with an overall record of (16-10). This finishing win spree earned his team an #11 seed in the CIF/L.A. City Section’s Division II playoff tournament. Another significant resumé note to Coach’s portfolio this season are the following MaxPreps rankings, State (CA) #321 and National #3,918.

Editor’s Note: This posting contains (5) post-game video interviews with Coach Perez as well as a short photo gallery. Please share this piece as widely as possible with your social media network contacts. For our newest viewers who are Roosevelt alumni, we provide you with a recommendation to watch our coverage of the team’s games that were “LiveStreamed” on East L.A. Sports Scene in affiliation with the NFHS Network. Just go to NFHSNetwork.Com and become a subscriber for a reasonable fee of $10.99 per month. You may cancel at any time after the month ends or keep your subscription to see other events that we’ve produced this past school year. 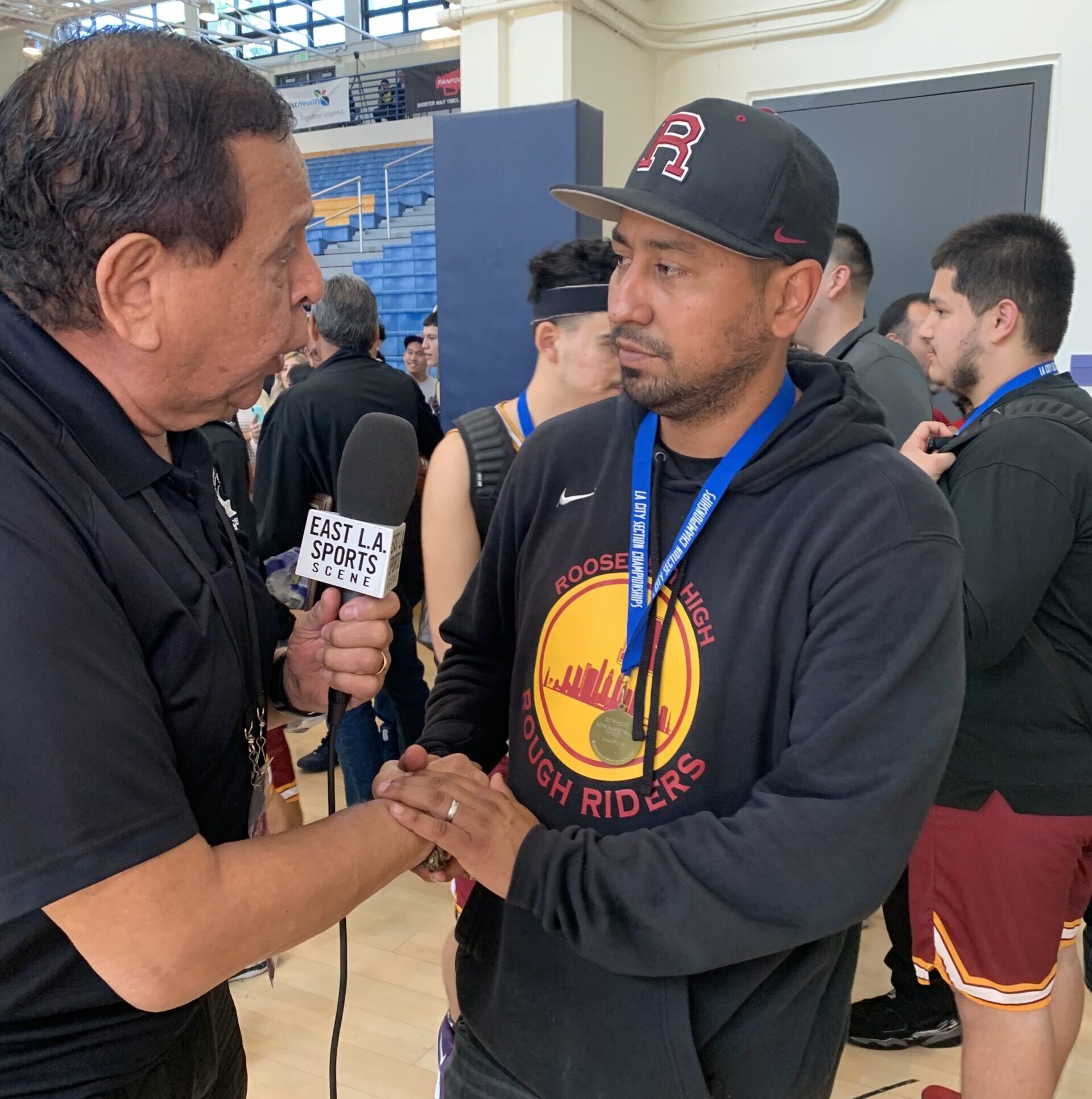 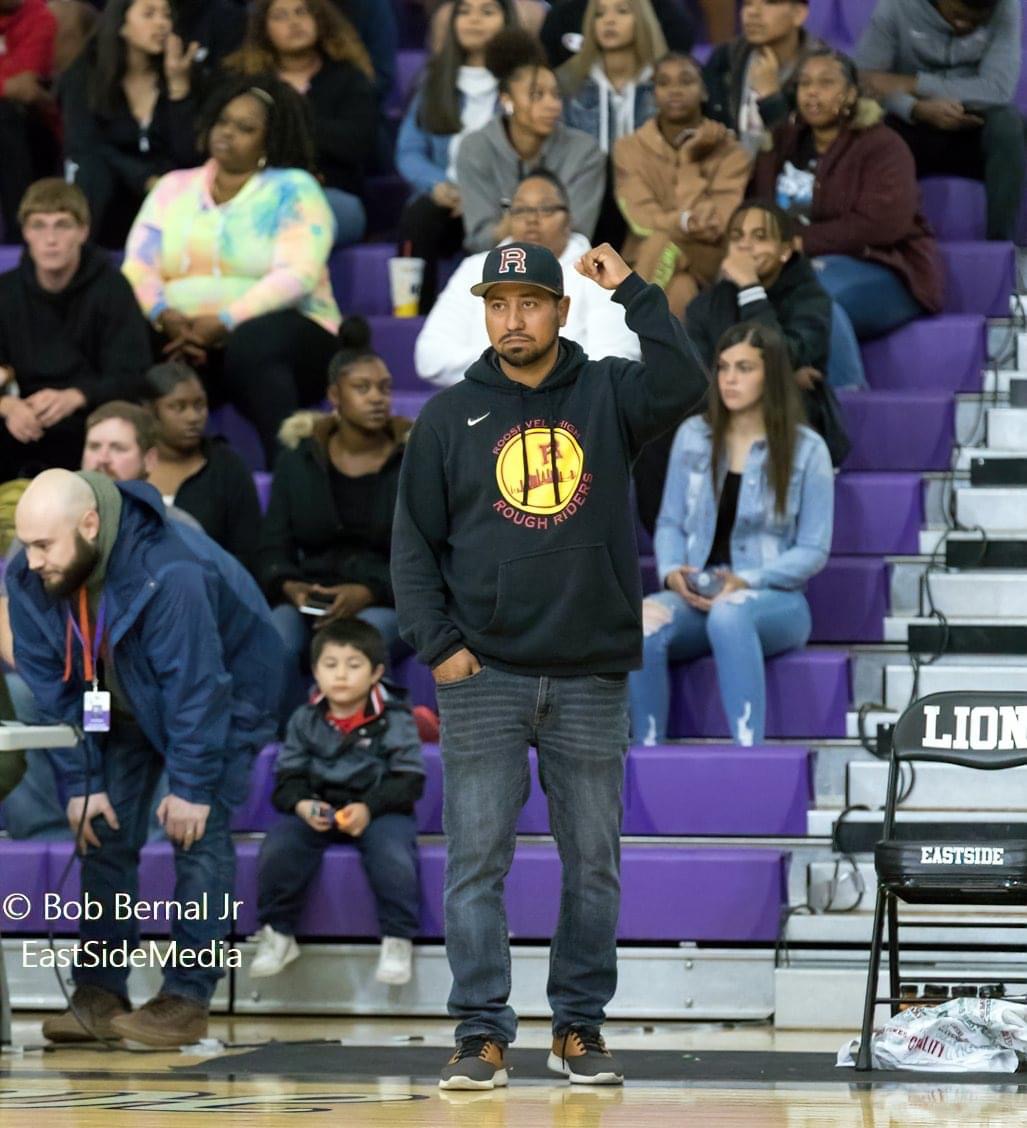 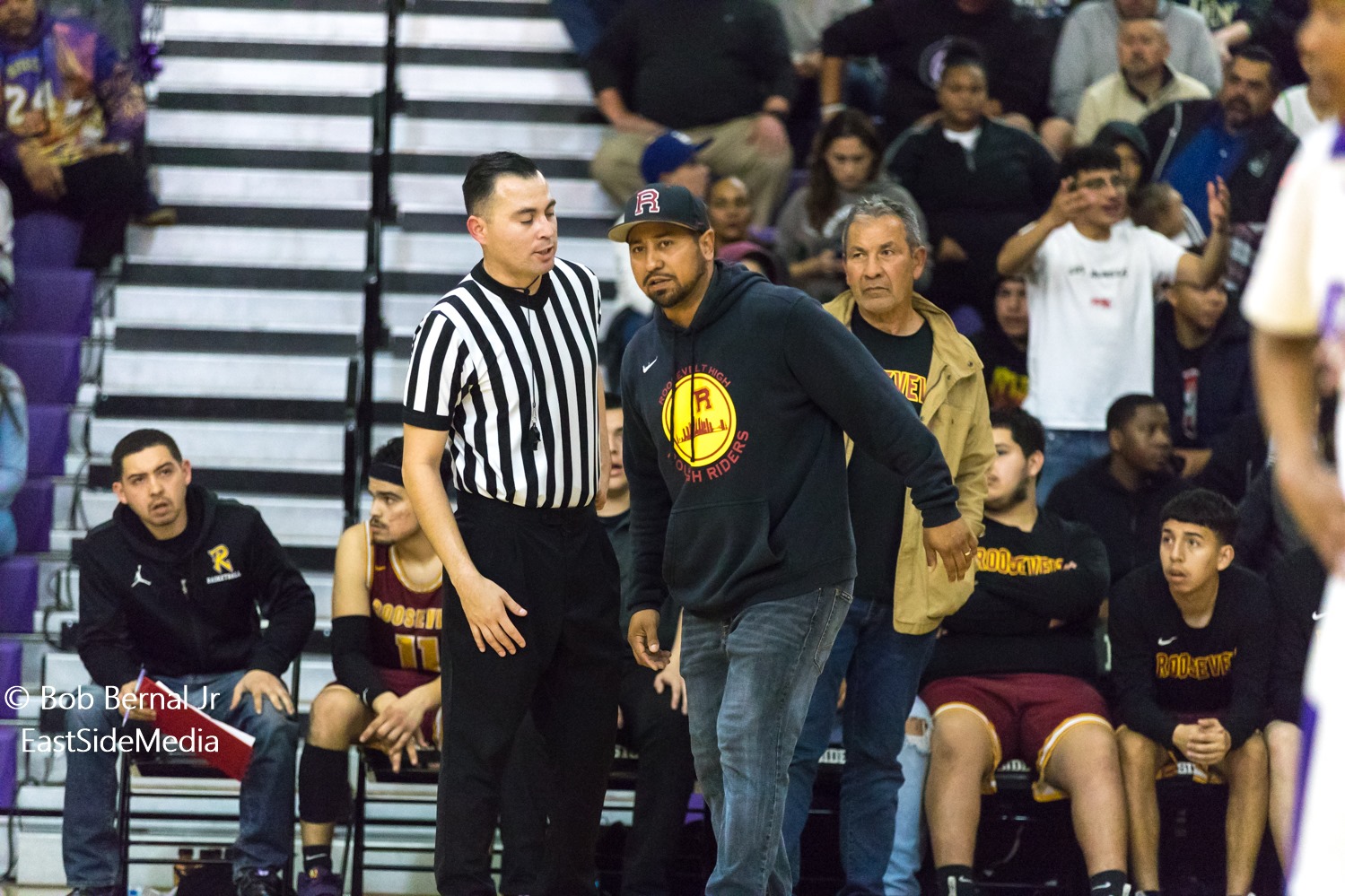 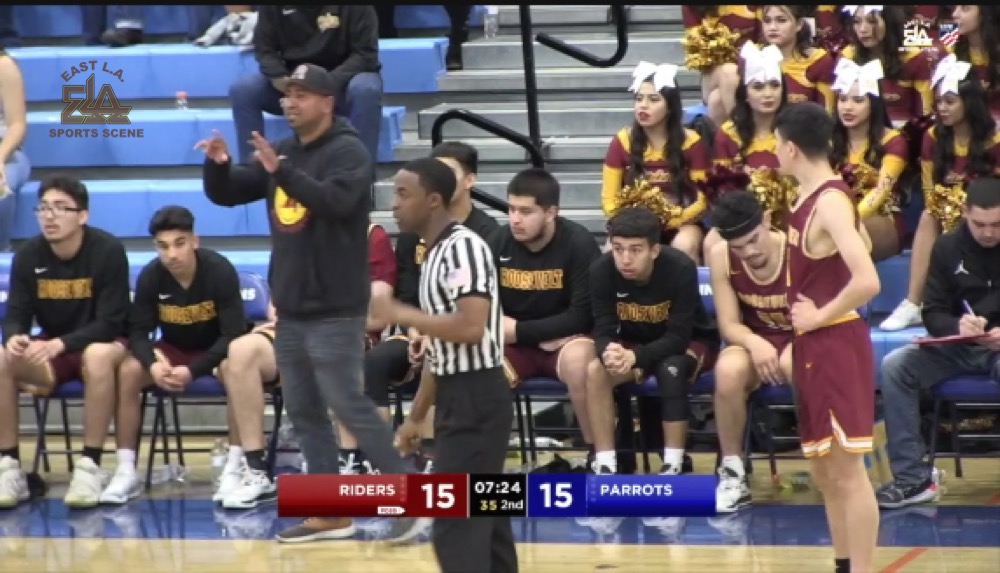 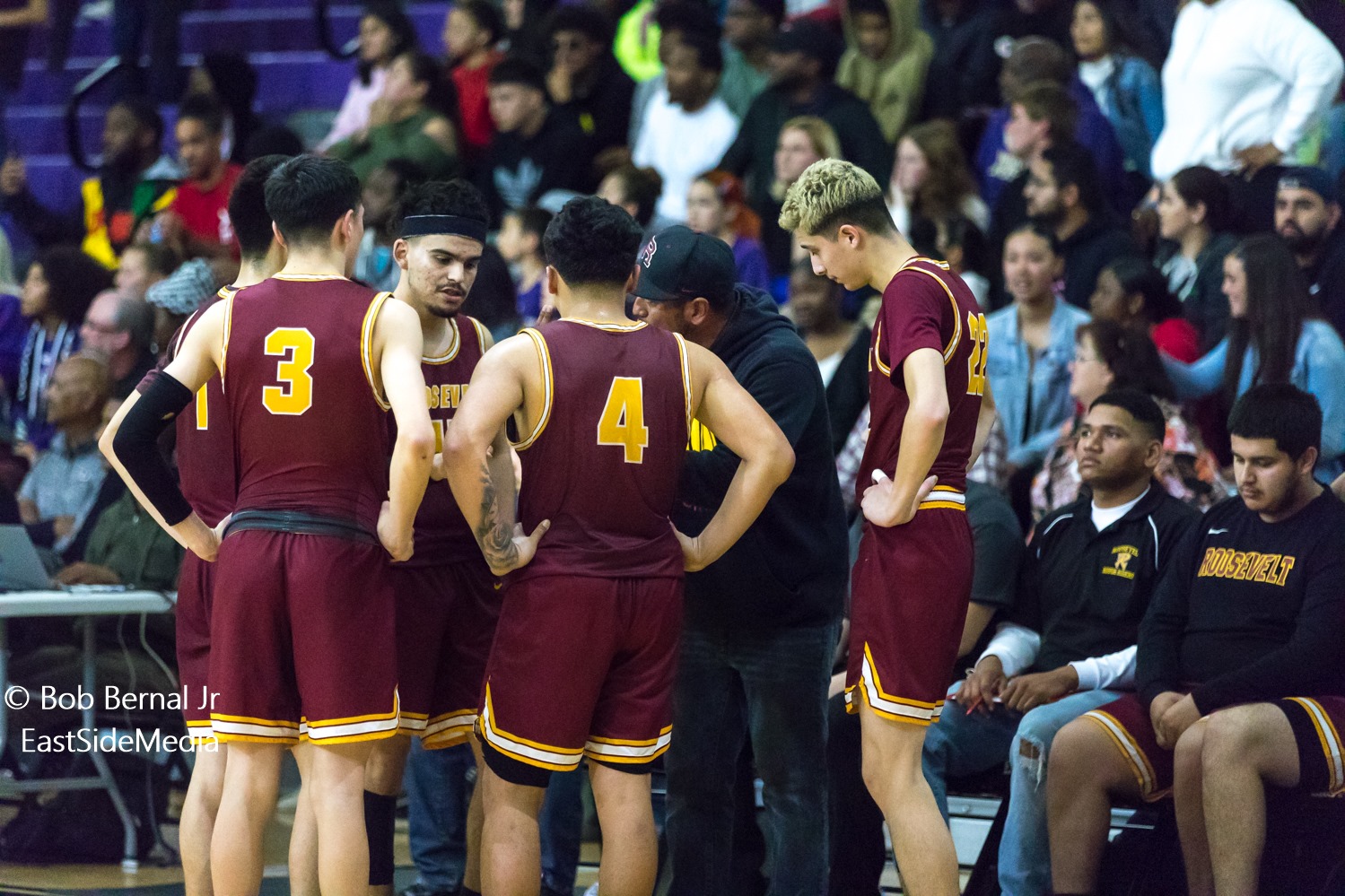 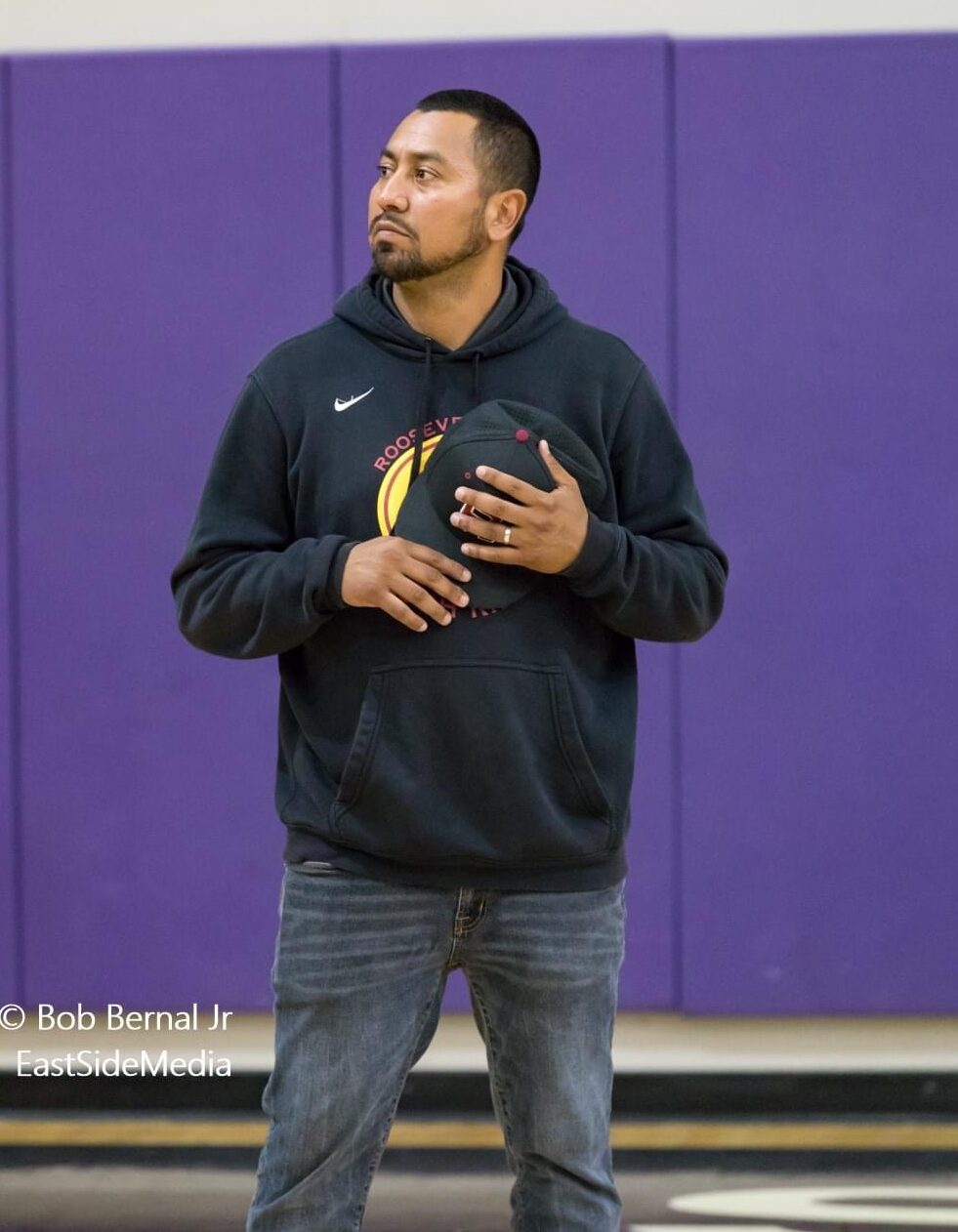 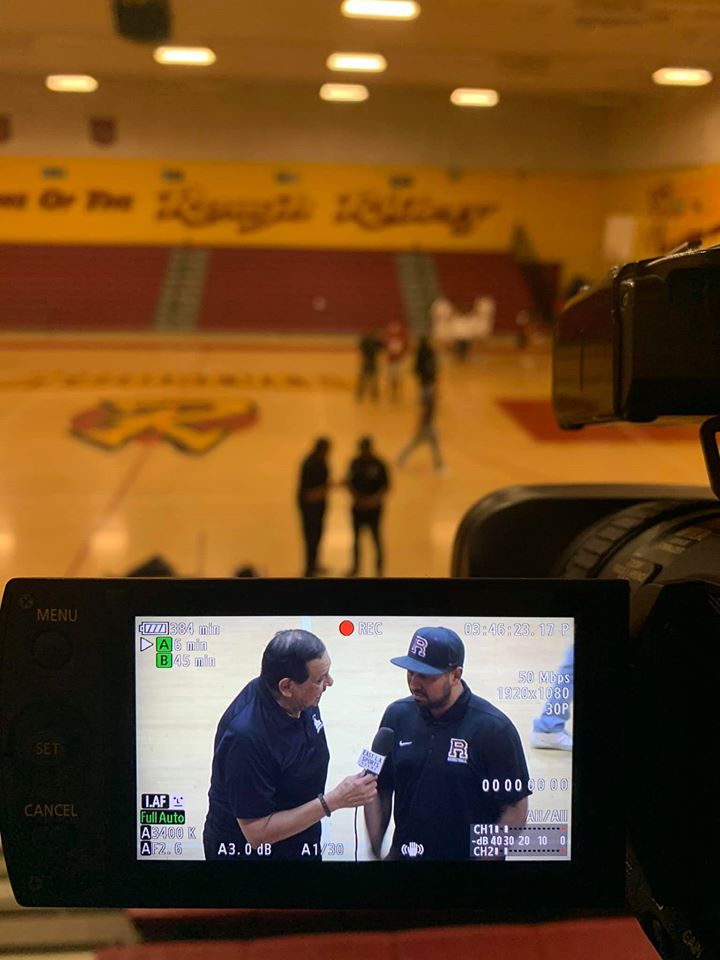 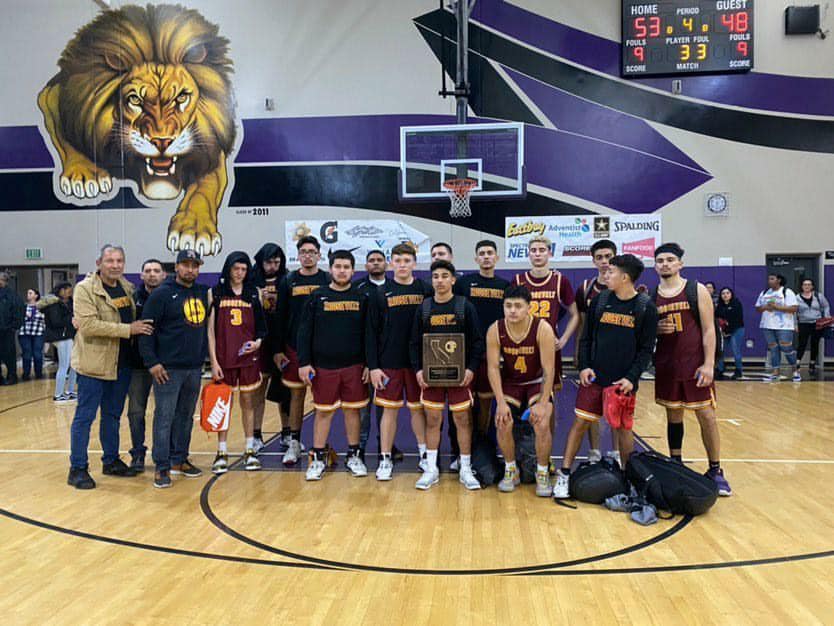 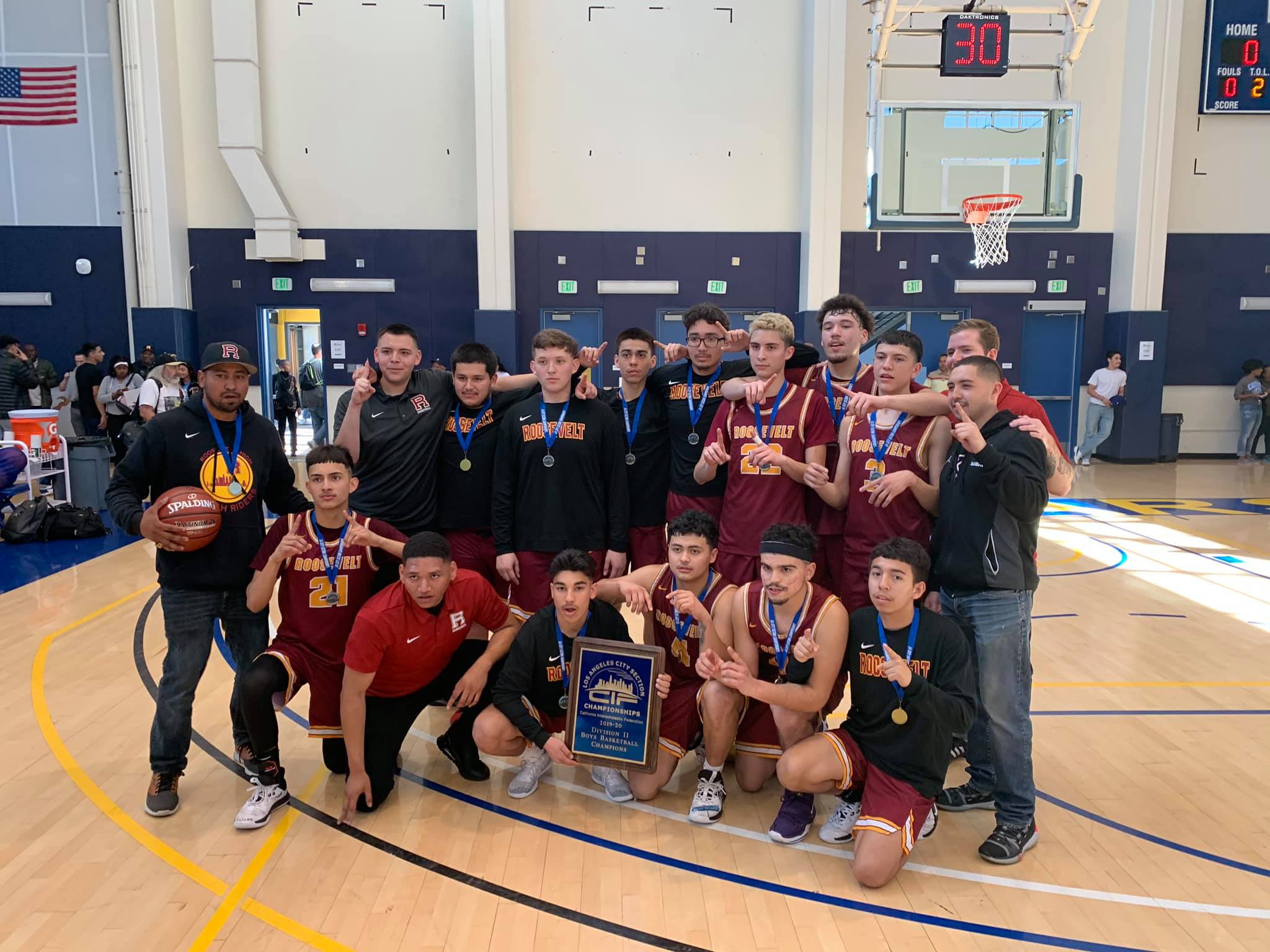 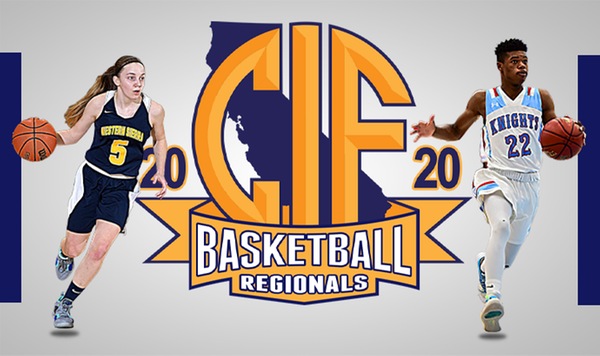 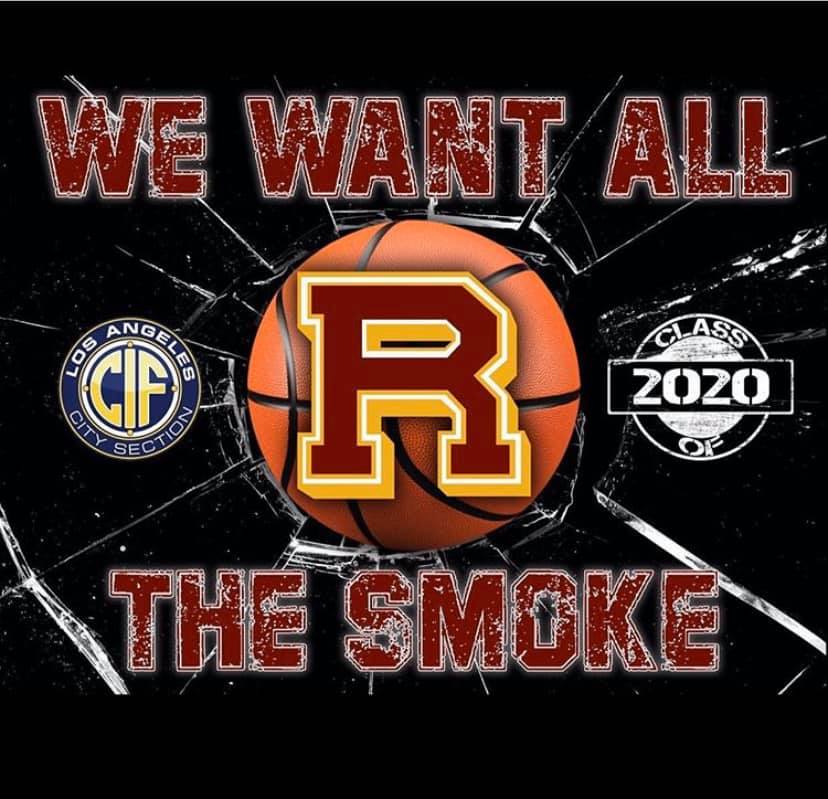 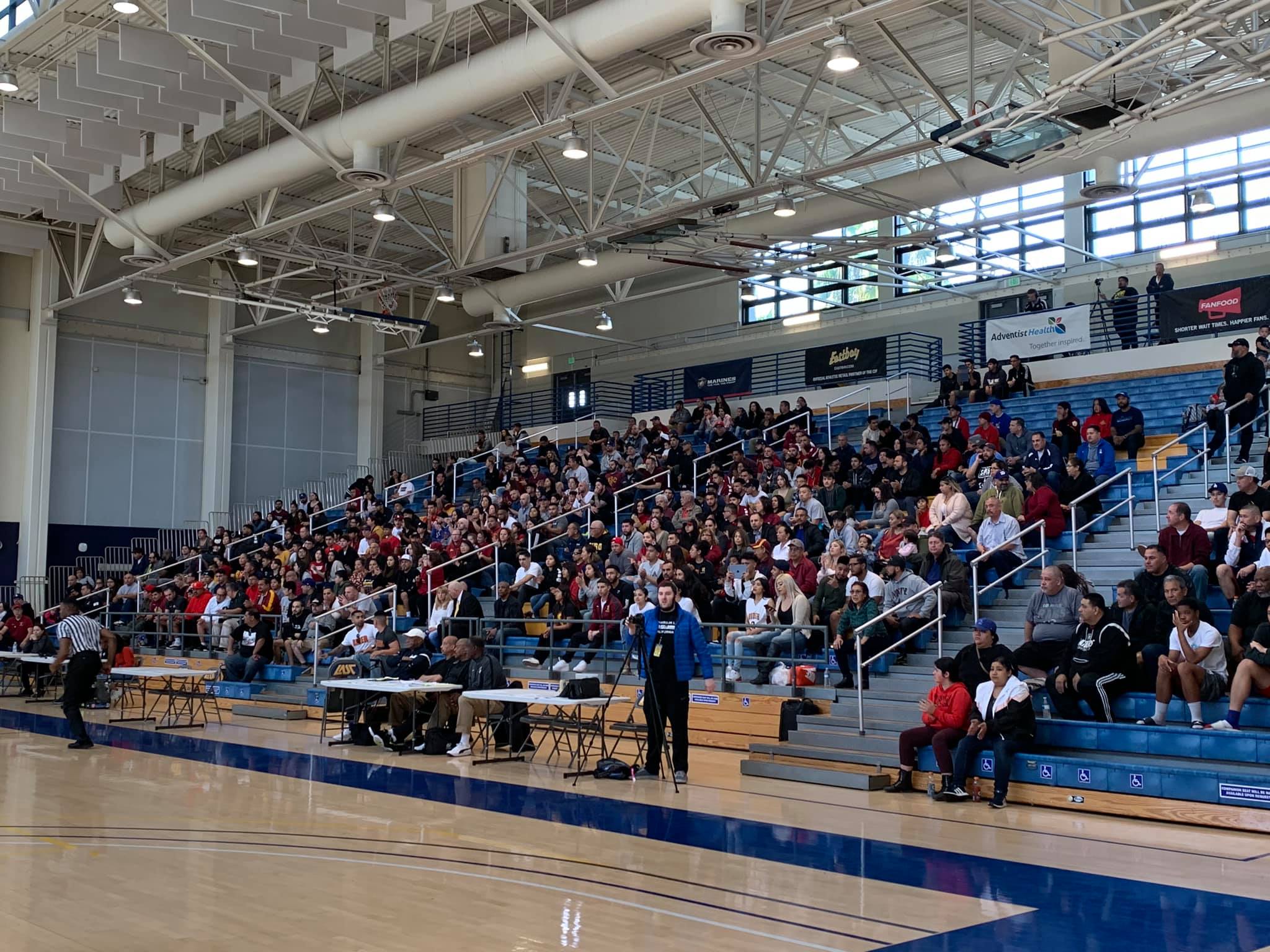 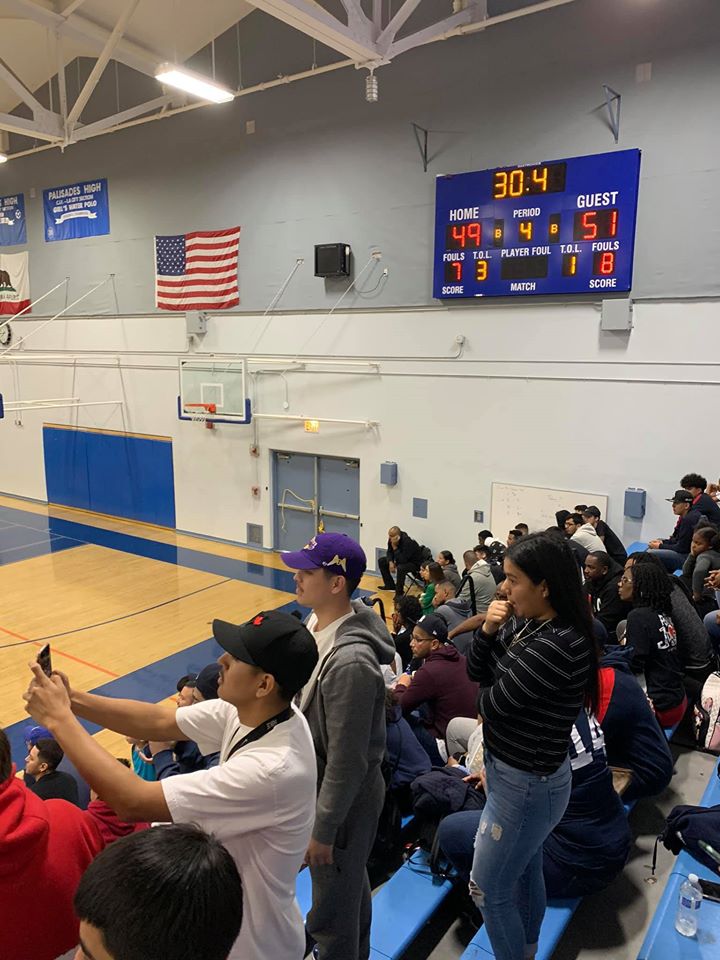 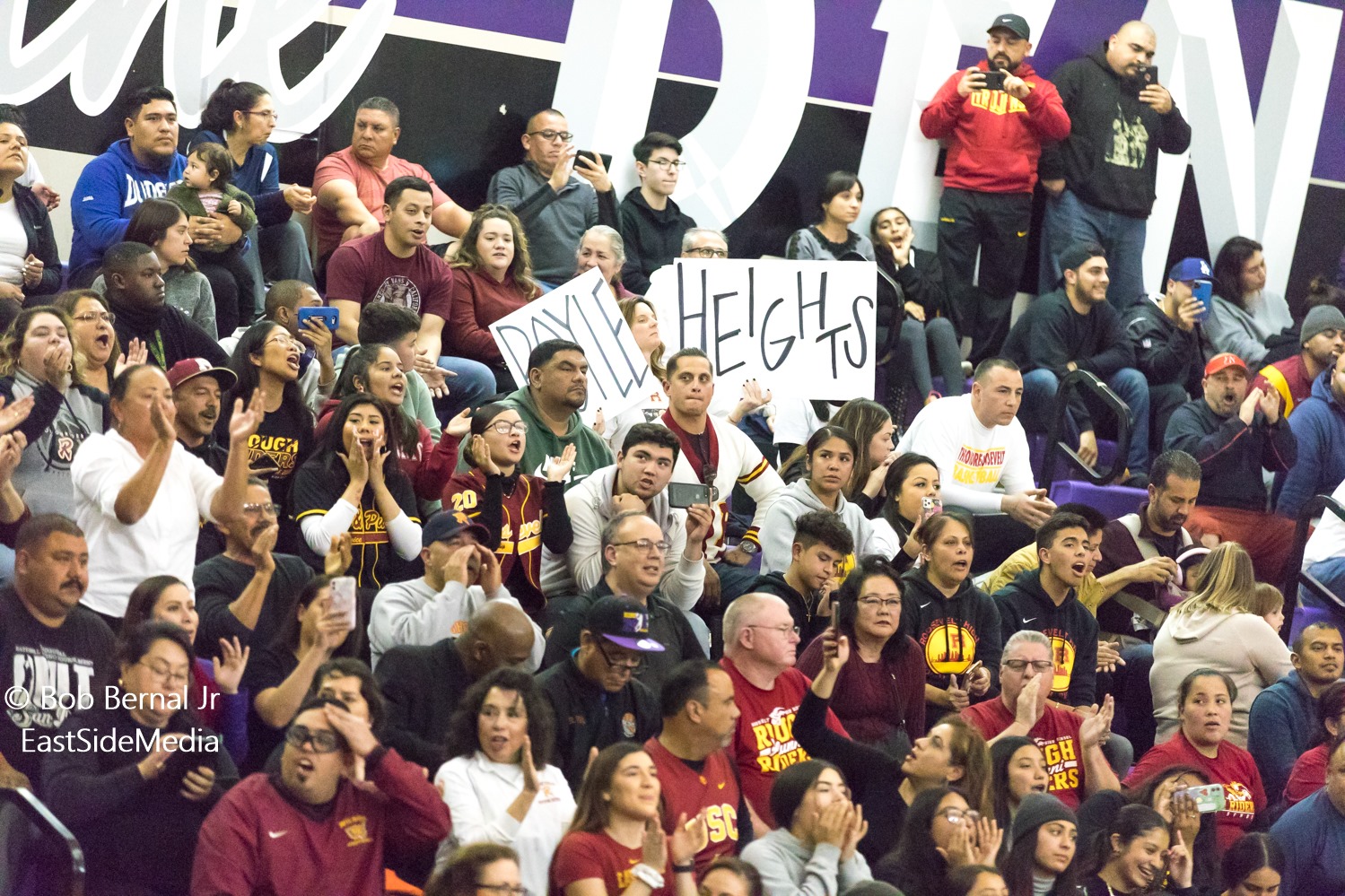 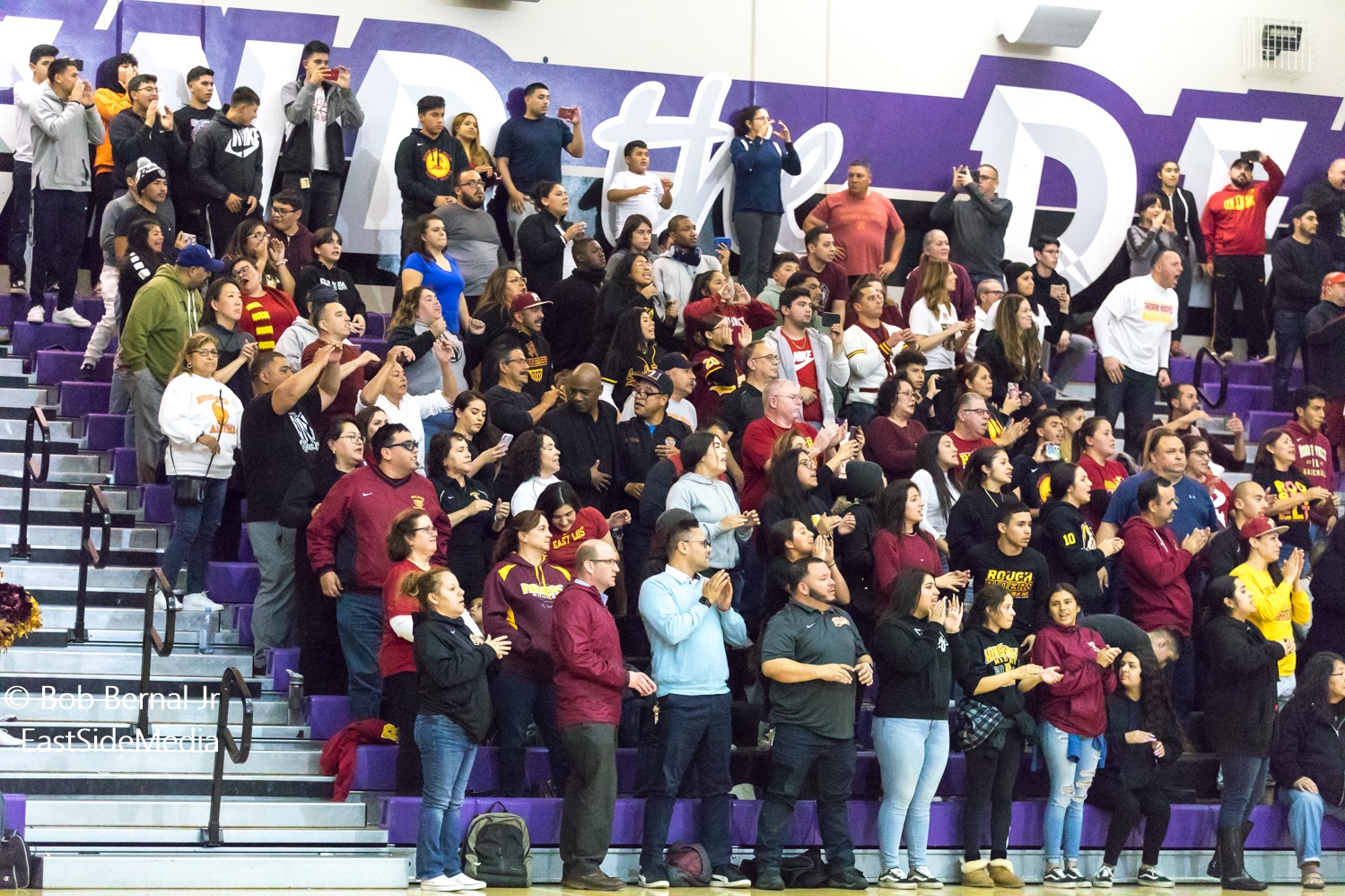 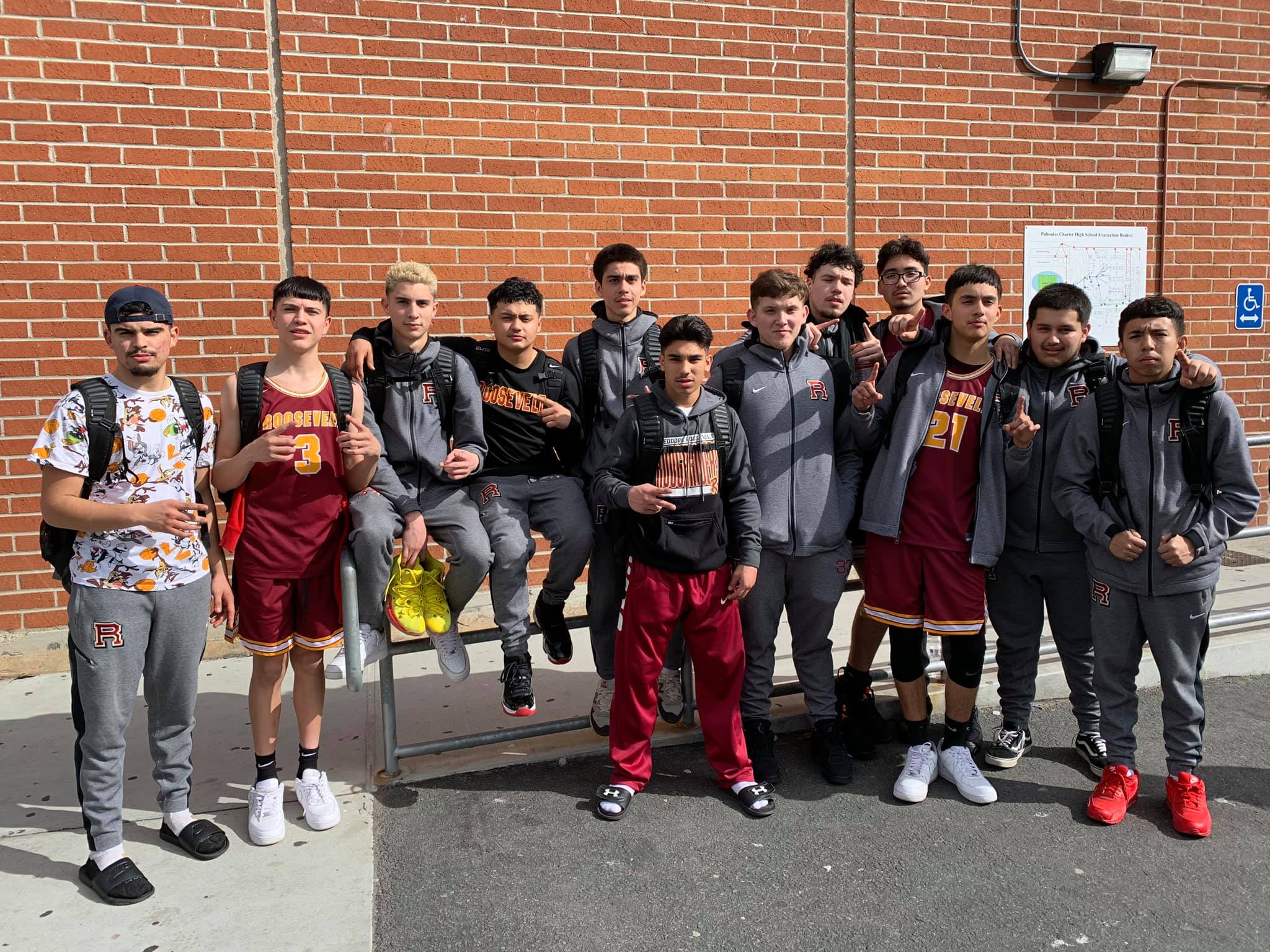 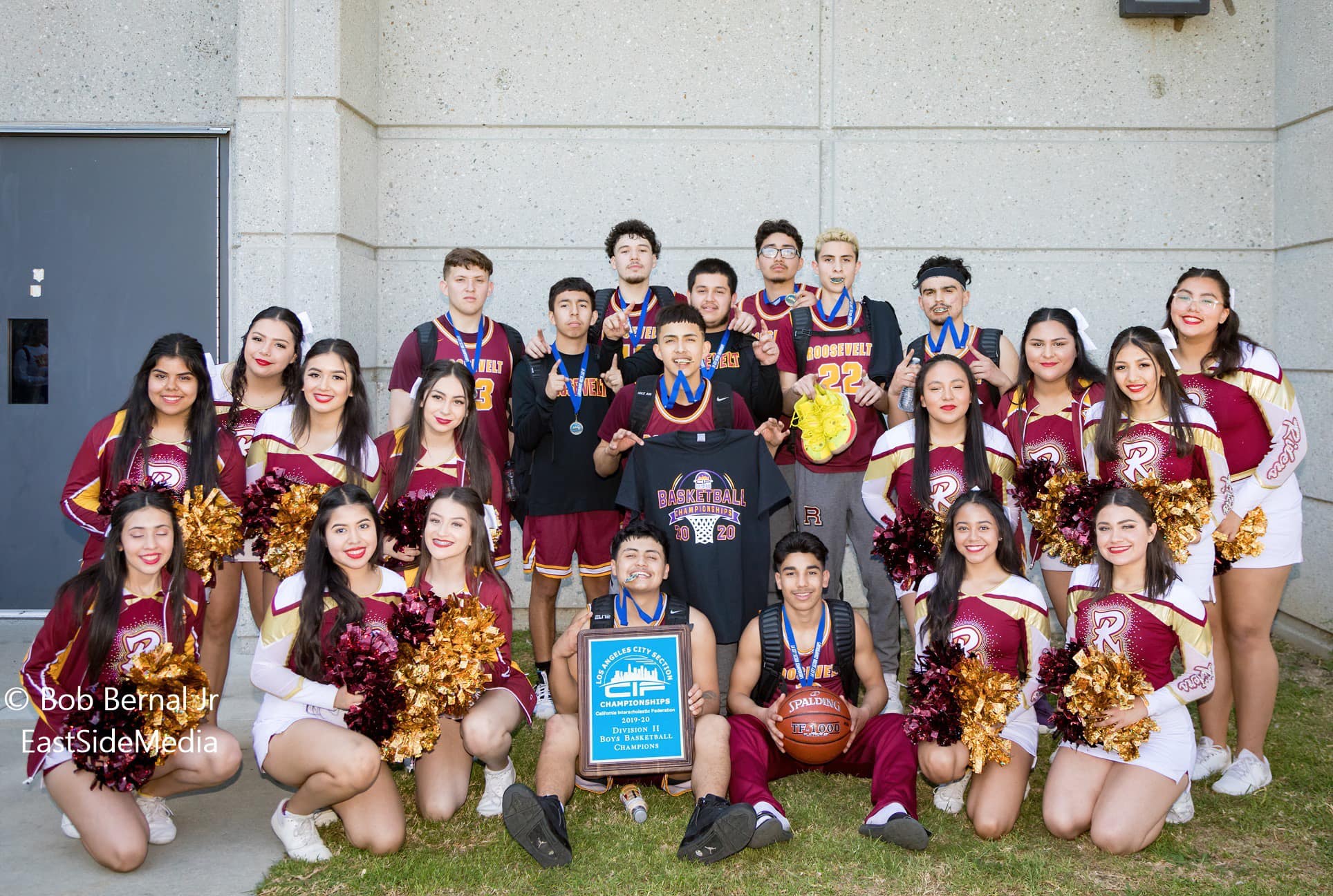 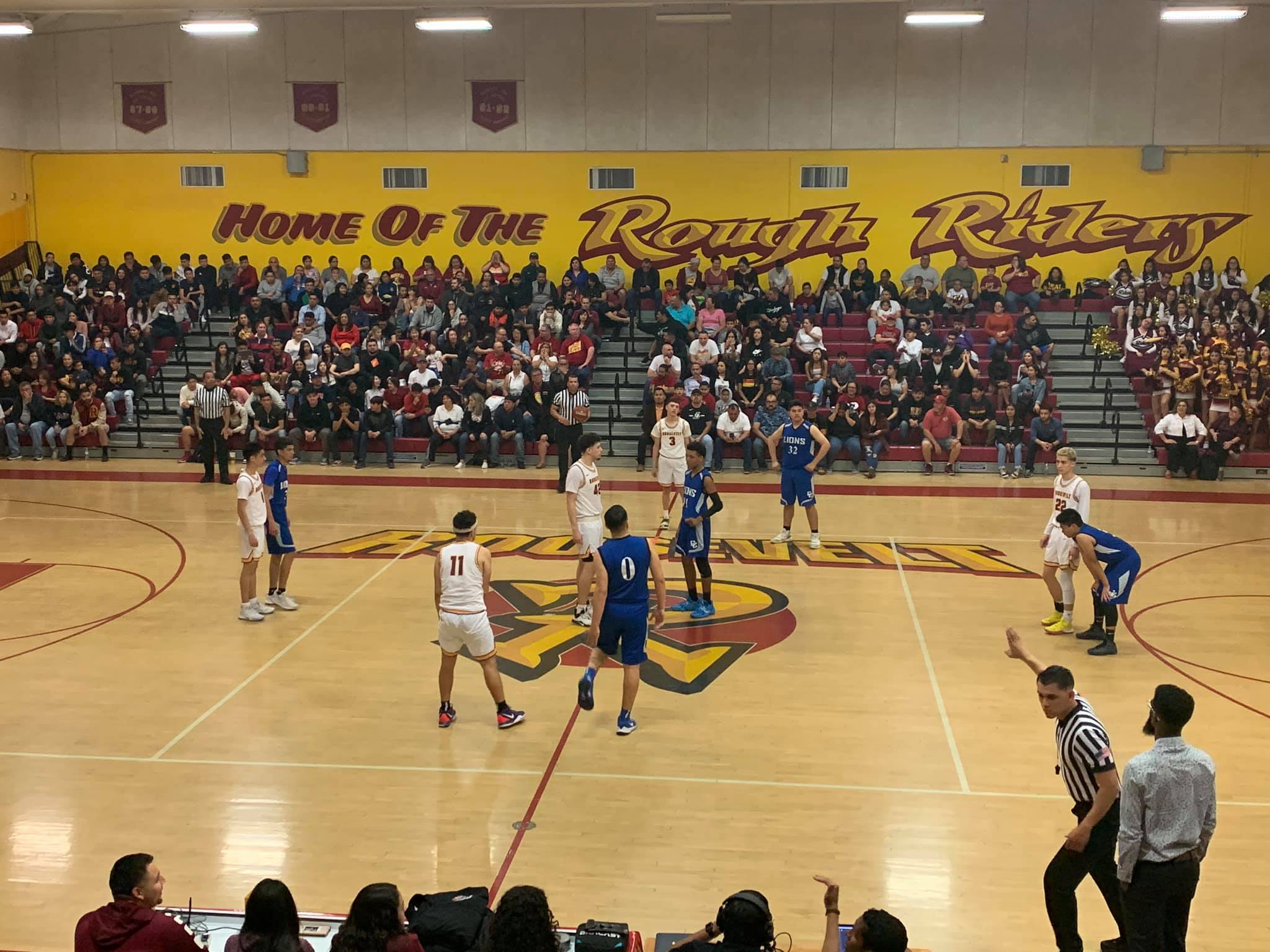 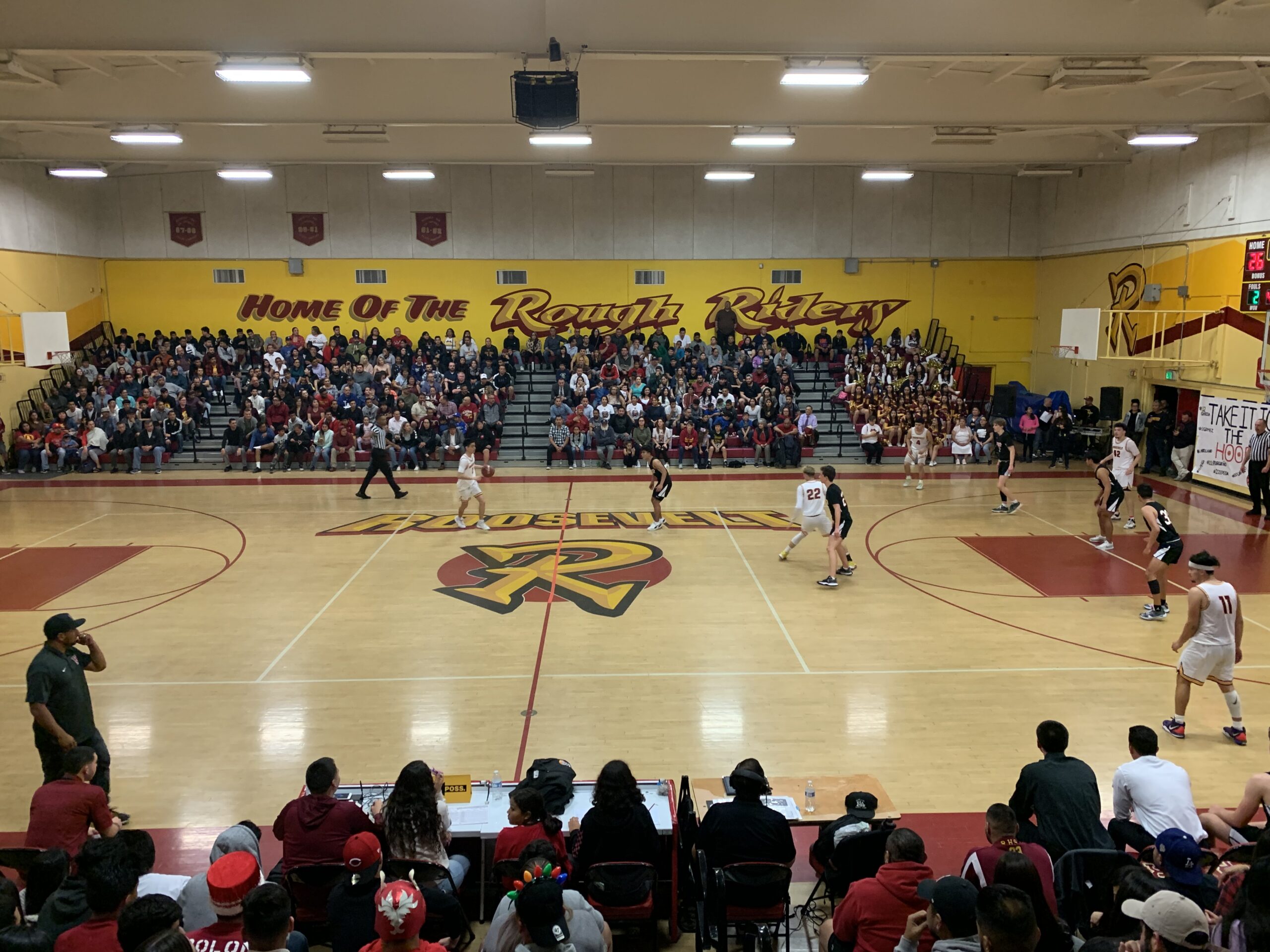 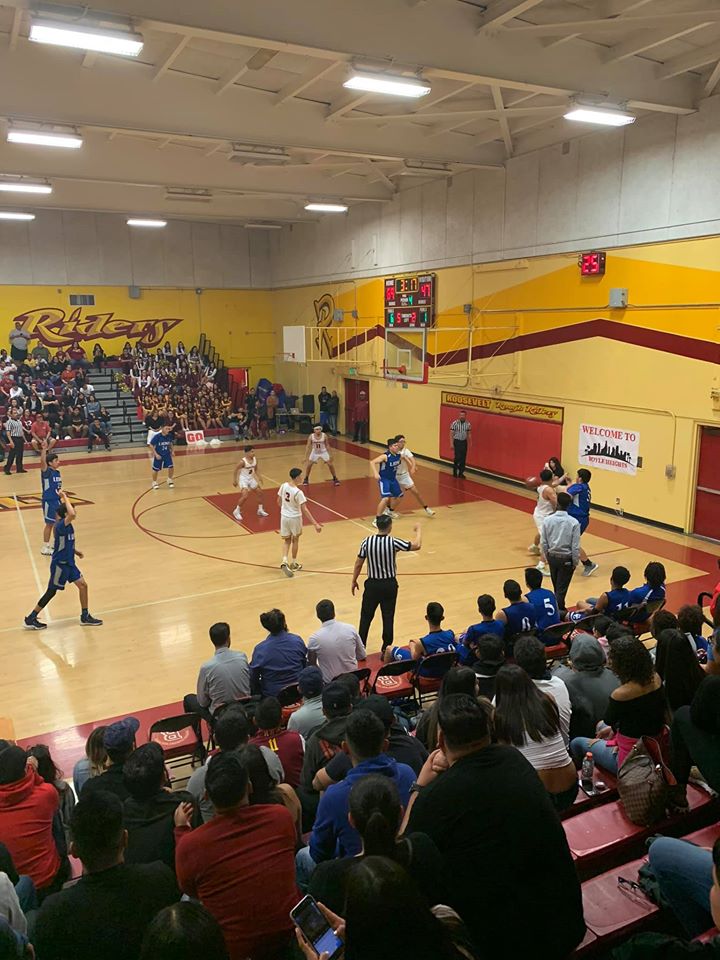 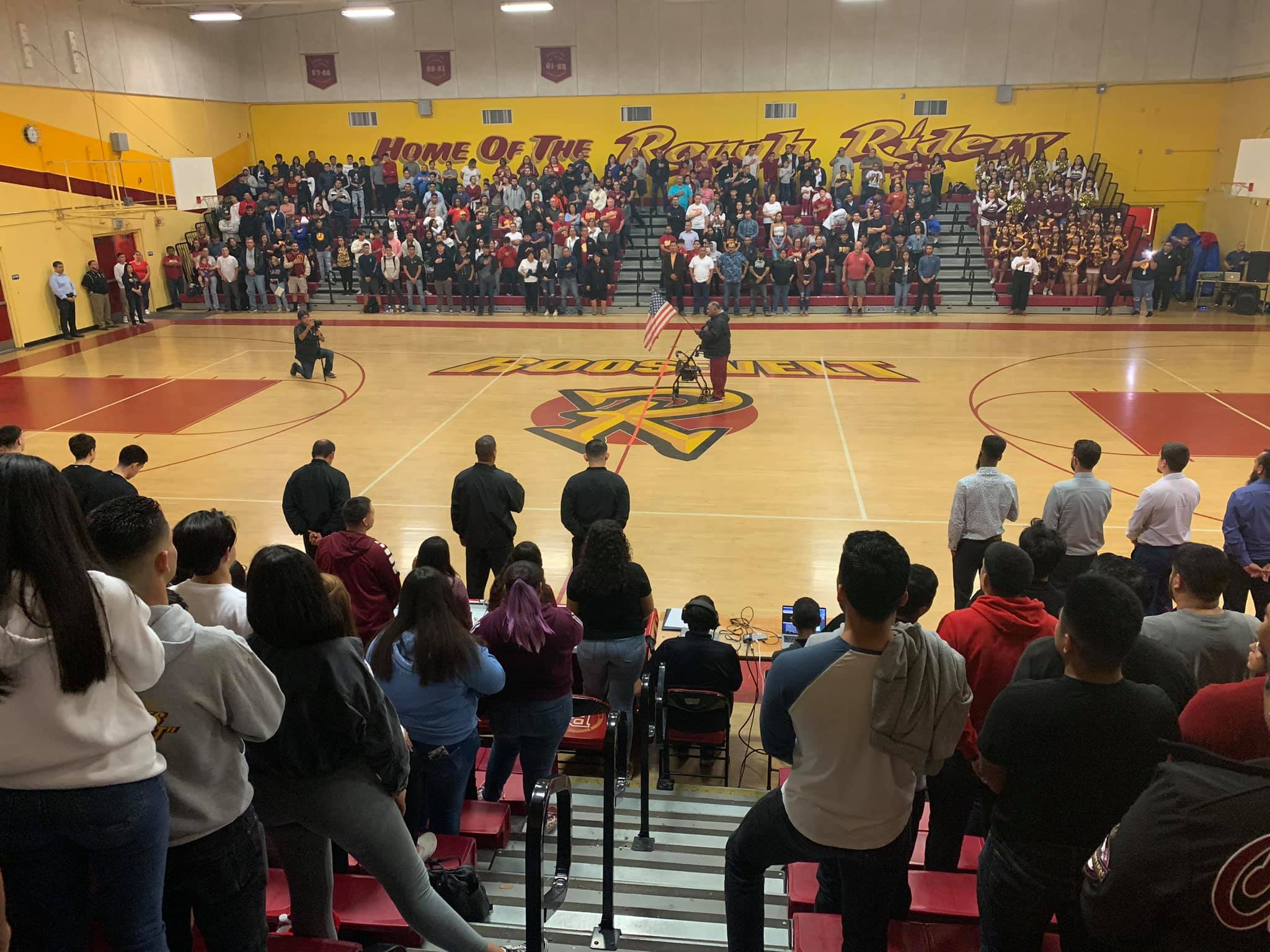 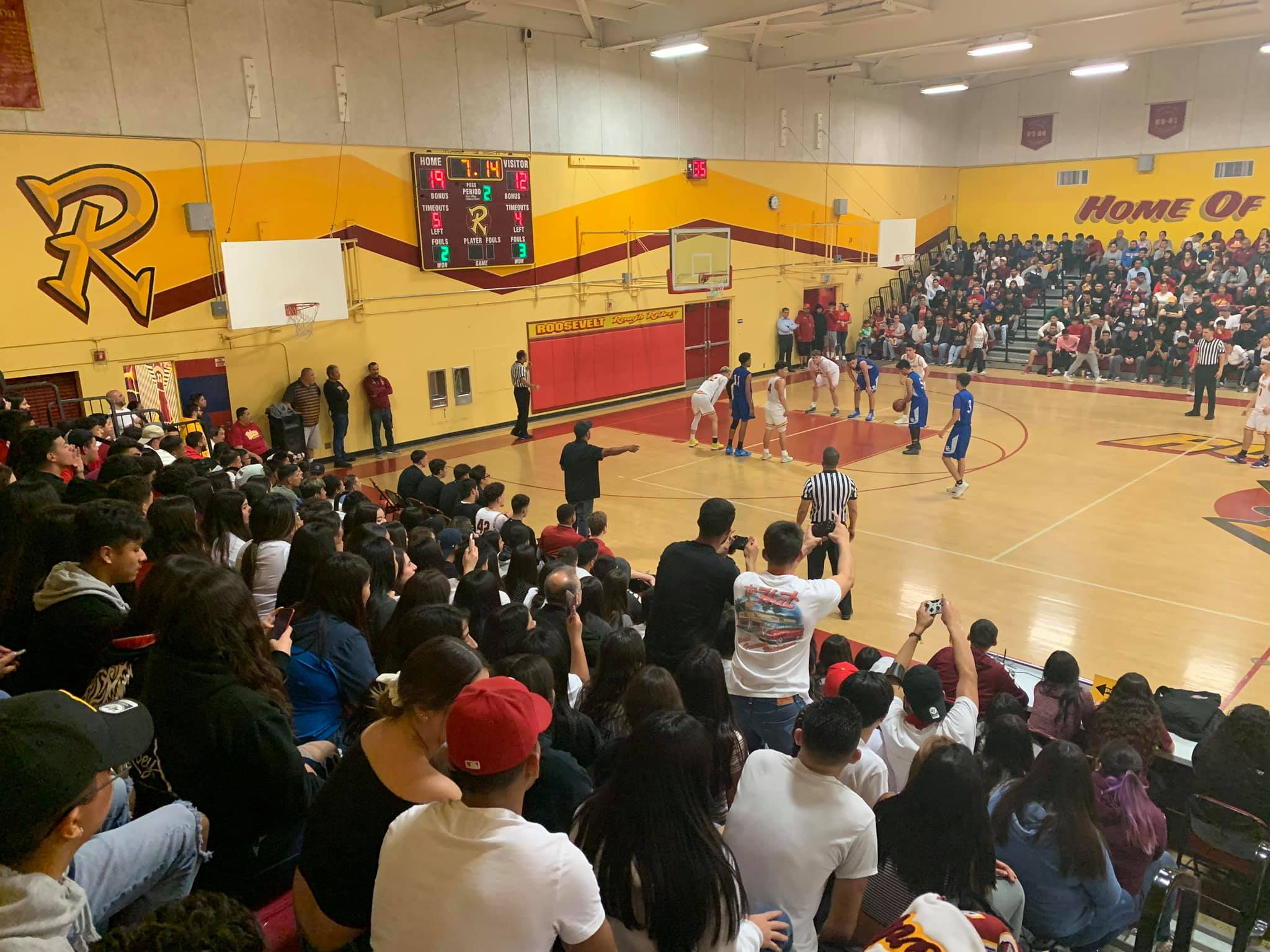 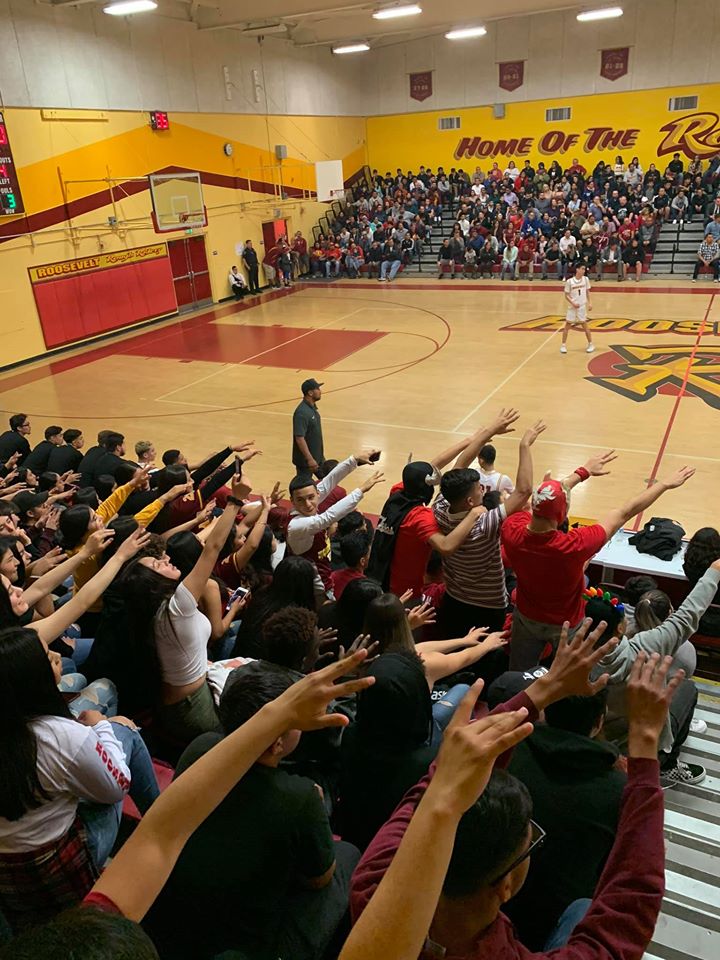 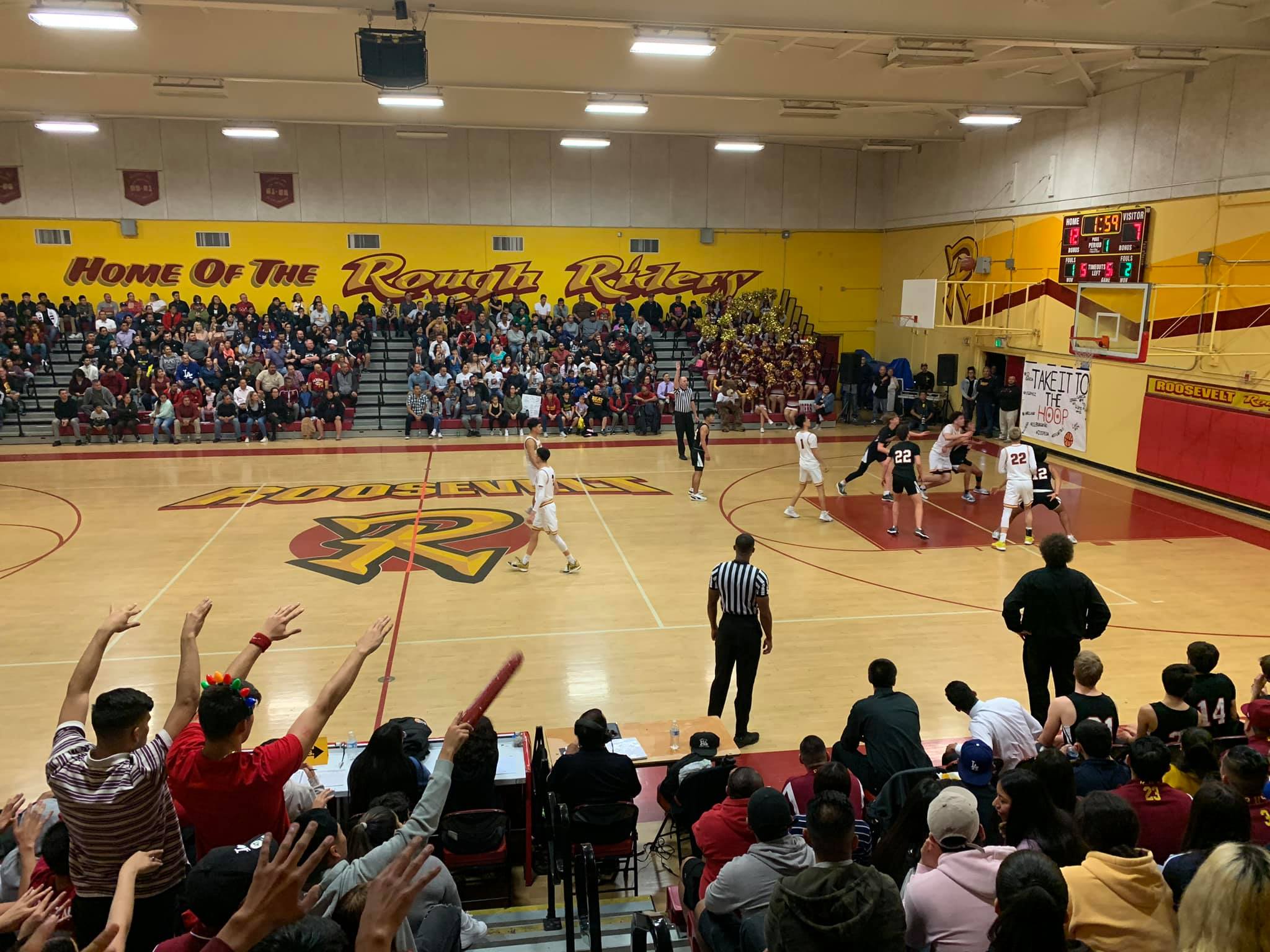 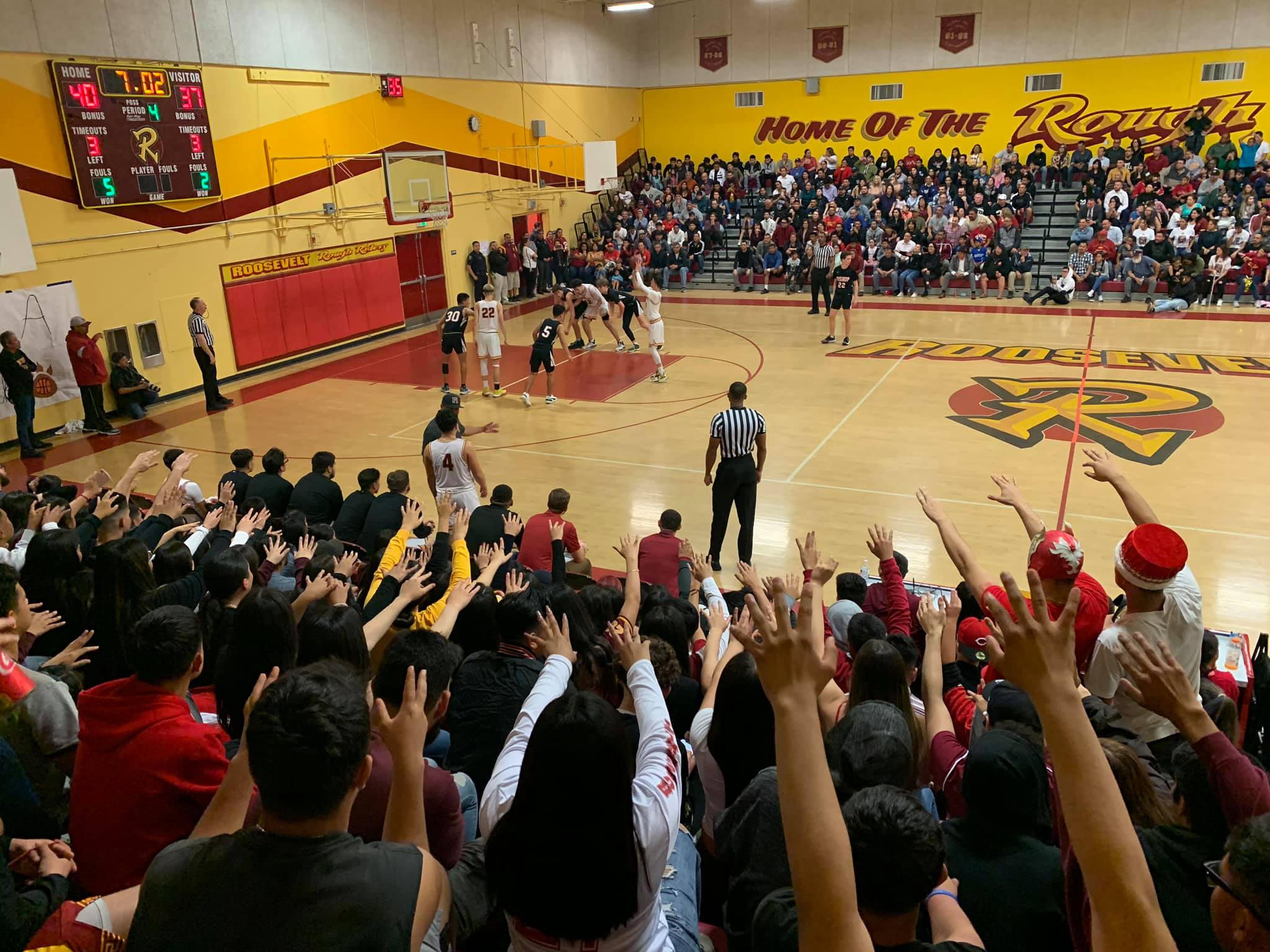 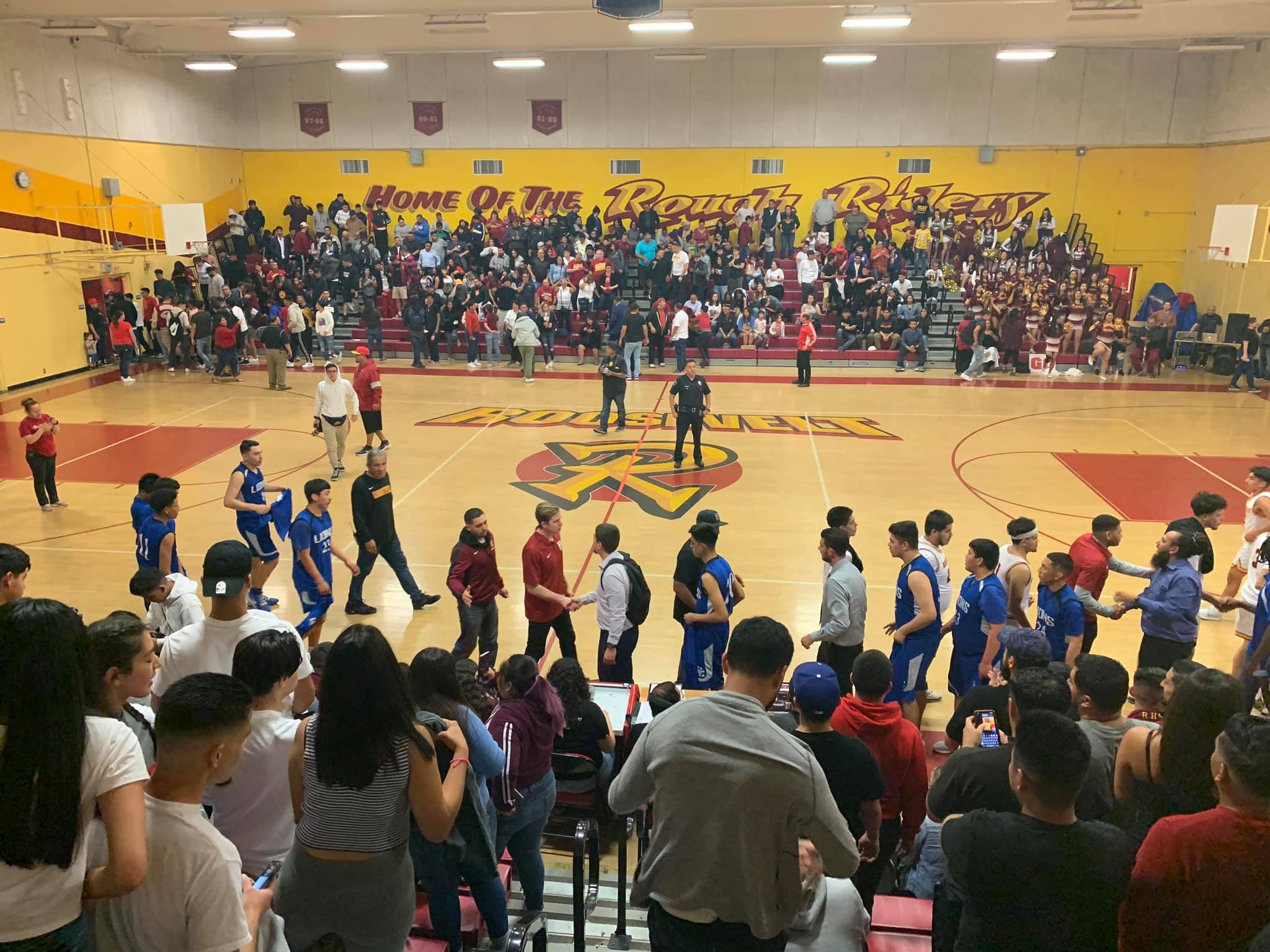 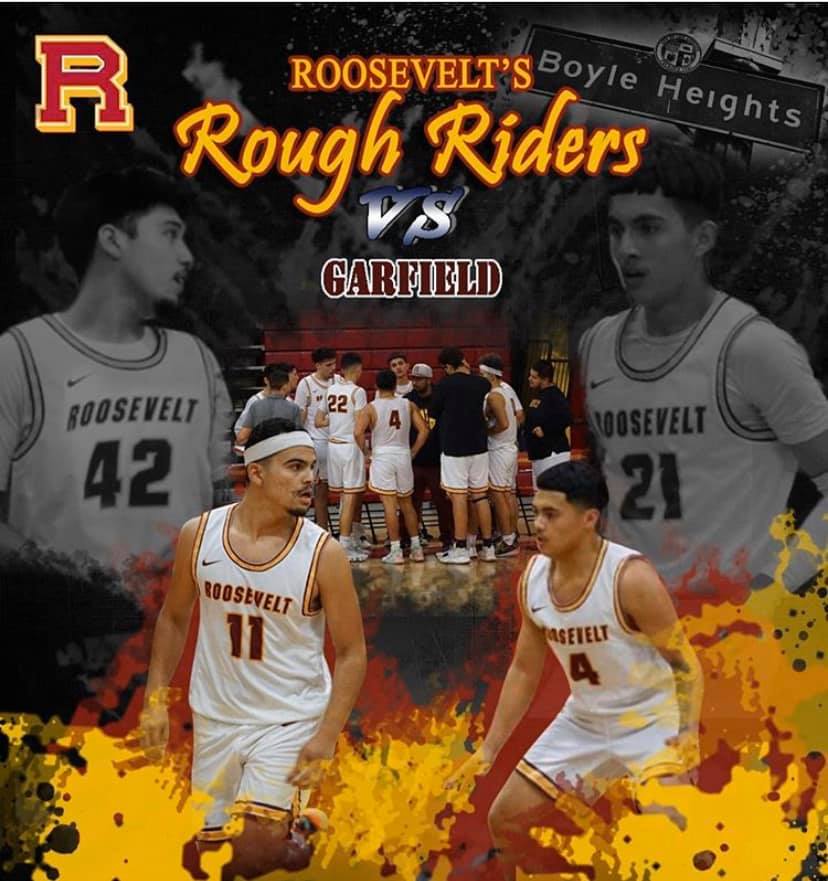 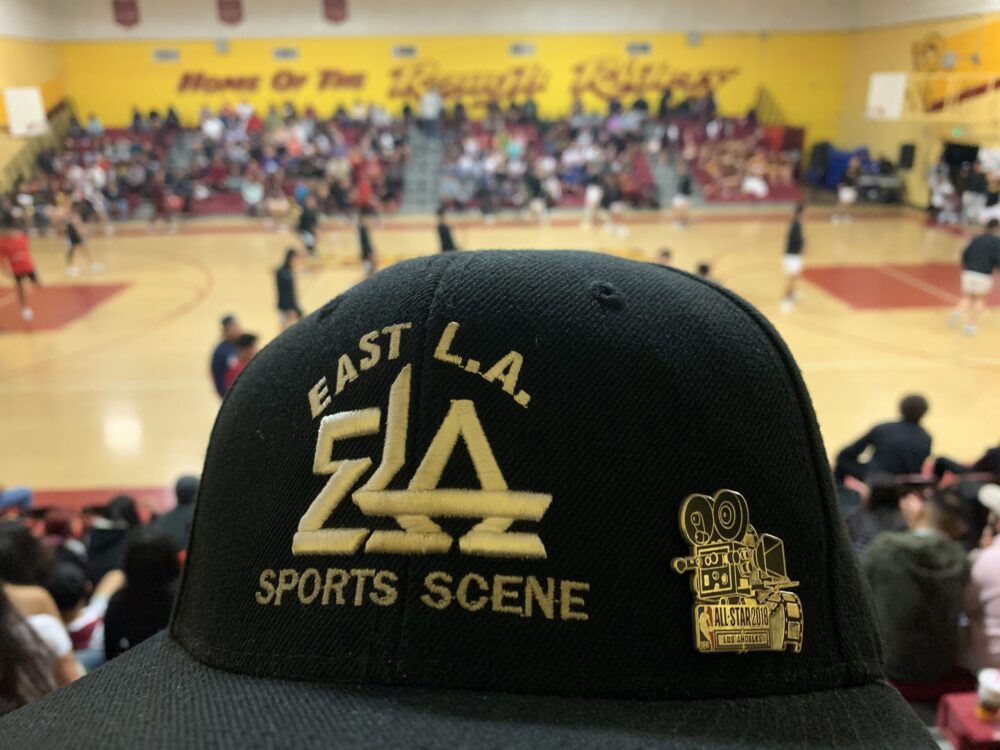 In prepping for their post-season, the Rough Riders became focused on making a run for the Division II title, opening with a surprising 1st round “Road” win over John F. Kennedy/Valley Mission League. That was followed by the startling quarterfinal “Road” win over #3 seed, Hamilton/Western League, and then an incredible semifinal win over #2 seed, Francis Poly/East Valley League at a neutral court, Palisades HS. This set the stage for the 2/29 title game versus Eastern League, 2nd place finisher and fellow member school, #4 seed, South East. Heads were turned and doubters were made believers as Coach “MP” (as affectionately called by his players) and his team went on to a four game playoff sweep to proudly claim the Division II Championship that was played at Los Angeles Southwest Community College.

With that extraordinarily historical win, the Riders’ overall record jumped to a much-respected, (20-10) and yet another season- extending week still up ahead. Next, it was off to the prestigious CIF/Southern Section’s Division V, State Championship Tournament. Due to the dominant way they secured the CIF/L.A. City Section title, when the State pairings were published, the Rough Riders were rewarded with a #2 seed, right behind the Eastside HS Lions from Lancaster, CA. To their great delight, Coach Perez and his Riders, were accorded the home court advantage in their bracket throughout the playoffs, as long as they won each game, of course.

With this now in mind, Coach “MP” began to prepare his team, not as an underdog any longer, but as the favorite, giving him the opportunity to mentally prepare his squad as the team to beat in this tournament.

First up was Cathedral City/Riverside County, followed by Bishop Diego/Santa Barbara County, and finally, by Delano/Kern County. All three were defeated on the Riders home court and all before high school’s “March Madness” equivalent of sell-out crowds, and a solid media presence.

The final obstacle awaiting the Rough Riders to claim their first-ever State Southern Regional Championship title and a subsequent shot at the State Final, on March 14th was a game against the home team and #1 seed, the Eastside Lions, of Lancaster, CA/Ventura County.

But on March 10th, this is where the magical and dynamic season would ultimately come to a close for Coach Perez and his loyal entourage of Rough Riders (23-10), as they fell to Lions by the tight score of (53-48). Thus, after playing (34) season games, this history-making team carved out an (11) game winning streak in second half of the season, which included (7) consecutive playoff wins. They also competed in a total of three seasons all combined into one, (Regular (26 games), L.A. City Section Tourney (4 games), & State Tourney (4 games). And, when it was all said and done, Coach Perez, his outstanding Coaching Staff, and the Rough Riders had left everything on the floor—the Blood, Sweat, Tears, and most importantly their Pride for school, family, and their Boyle Heights community. And, unfortunate as it is to say, Eastside’s season ended when the feared, dreaded, and life-changing (COVID-19) Coronavirus rapidly swept the world and our country, forcing all scheduled American sporting events at all levels, to end immediately.

When asked for his thoughts on earning his “Coach of the Year” award, Coach Perez, stated that…“It’s a great honor to be named, and a bit overwhelming because I don’t truly know what it should feel like to be awarded such a distinction. I basically coached the game the same way I learned how to play it. I always tried my best and what I learned from a few mentors and former coaches, I would try to implement at the appropriate times. I have to happily say that this was the year I was lucky that the boys put it all together. I am not even the best coach in my own family.”

He went on to add….“what stood out to me, and what I will always remember will be the hard-core basics of coaching this game… like all of the time consuming, and what seems like insurmountable, things that a high school coach has to endure season-after-season. But in the end, I can now say that all of those hard times made all the hugs with players, the high-fives with students, fans, family, and those most-appreciative handshakes with emotional alumni even-more special. I was just so proud, truly happy, and sincerely glad to have been here for it.”

As great and memorable season as it was for Coach Perez and his team, the final curtain has not yet been drawn concerning the rewards and awards in acknowledging the 2019-2020 Roosevelt Rough Riders Boys Varsity Basketball Team’s unforgettable achievements. Up next on their own “Road To Glory,” is the ordering of the team CIF/L.A. City Section Division II Championship rings for Coaching Staff, Administrators, Team Managers, and of course, all the Players. Plans are now underway to raise the required revenue through a Go Fund Me account and the sales of a commemorative T-Shirt, designed by former player and Rough Rider Alumni, Jorge Parrales, Class of 2005. We will be posting up more information as the plan takes greater shape and is made public.

Final Thoughts….Although the Coronavirus (COVID 19) has basically ended the rest of the school year for all California high schools, East L.A. Sports Scene will be waiting for the first opportunity to publicly salute Coach Mario “MP” Perez and his talented team of CIF/L.A. City Section’s Division II Champions. Details will be worked out and we will ultimately inform all of our Followers and the Rough Rider Nation of the Awards program that we have in mind to honor Coach and his now highly acclaimed team.