Bruins Doing Well On The Road To The Final Four 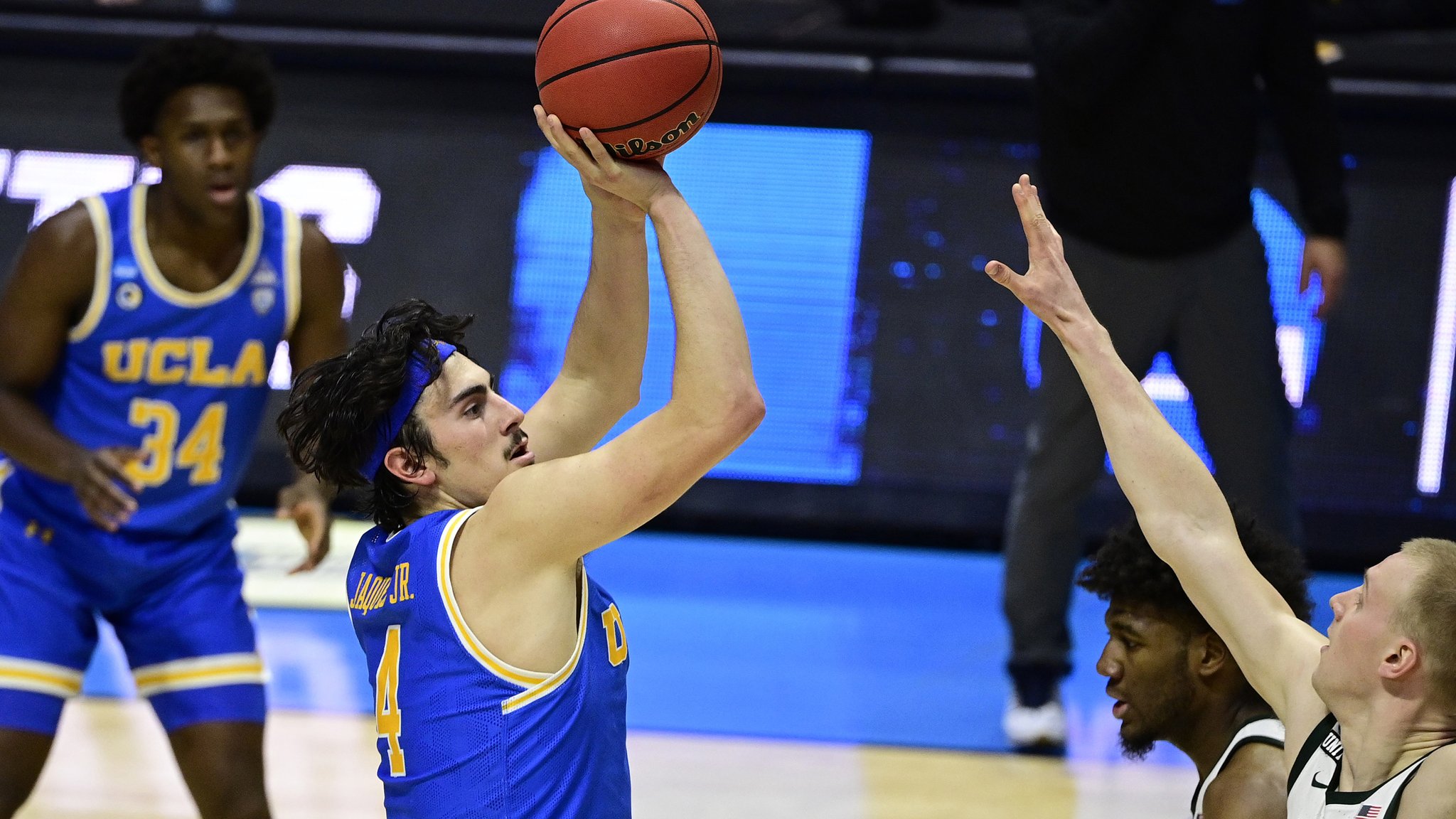 (East Los Angeles, CA) March 22, 2021 [From The Editor’s Desk]: Let’s start following the bouncing basketball…because the “Big Dance” is starting to look very good for the UCLA Bruins Men’s basketball team. Right now, they are in Indianapolis, Indiana, as they compete on National TV, inside the designated “Bubbles” and the accompanying atmosphere of enormous Anti-COVID precautions and protocols. With their determined, infectious team spirit and “game-day” demeanor, the Bruins have caused many, many sports media journalists, analysts, experts, etc. to start paying close attention to their outstanding play thus far in this year’s NCAA “March Madness” Tournament. Due to missing their chance to play and watch in last season’s COVID-cancelling tournament, the players, fans, and coaches’ anxieties and expectations are still extremely high for all teams that made the 2021 “Dance of 64.”

Let’s move to briefly review the Bruins first two games. On Thursday, 3/18, the Bruins (18-9) knocked out the Michigan State Spartans (15-13) in their “First 4″/”Play-In”, and subsequent thrilling  “Overtime” game by a final score of (86-80). The NCAA allowed a limited in-person attendance. The game was played in the Mackey Arena. 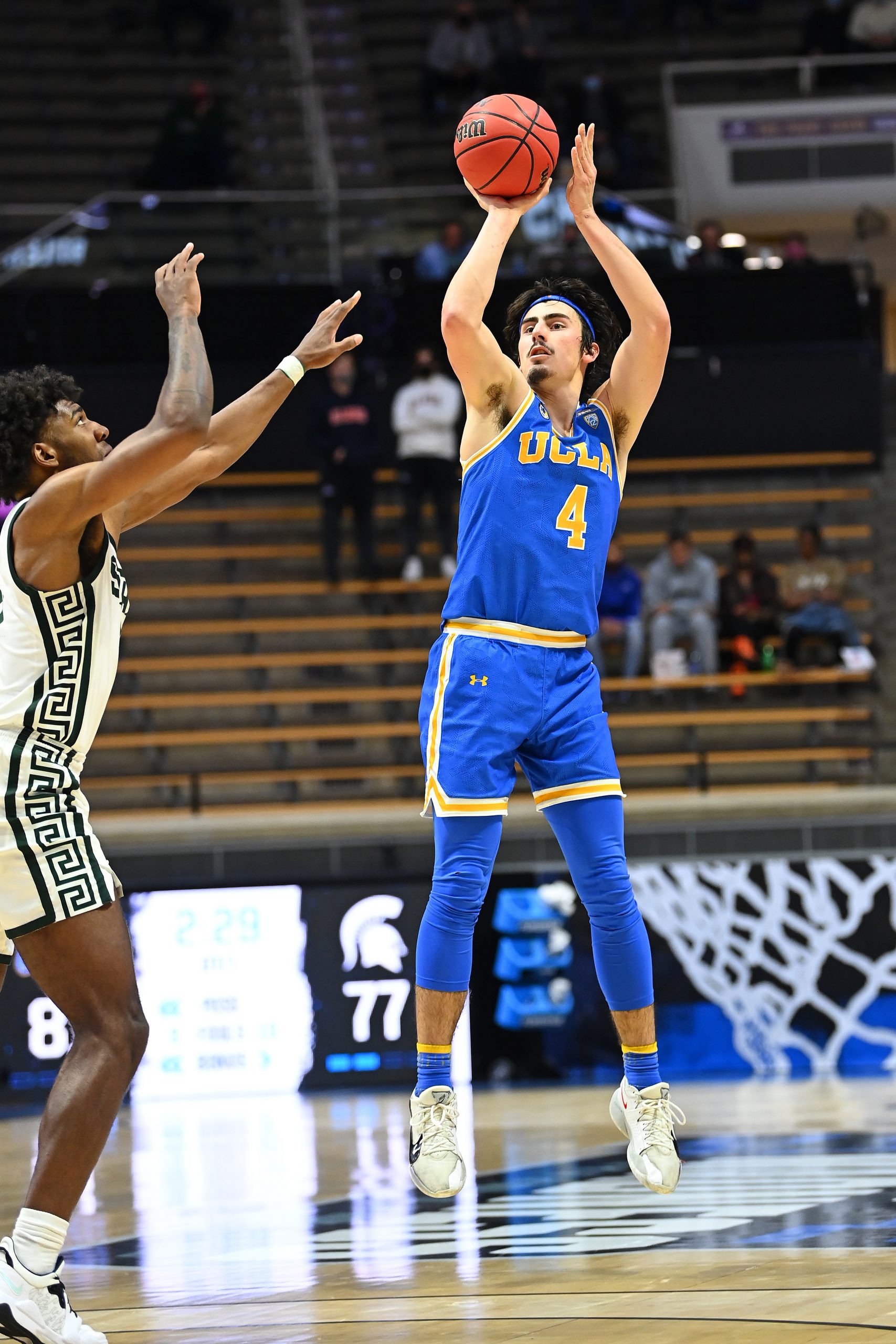 WEST LAFAYETTE, IN - MARCH 18: Jaime Jaquez Jr. #4 of the UCLA Bruins shoots a three pointer against the Michigan State Spartans in the First Four round of the 2021 NCAA Division I MenÕs Basketball Tournament held at Mackey Arena on March 18, 2021 in West Lafayette, Indiana. (Photo by Andy Hancock/NCAA Photos via Getty Images) 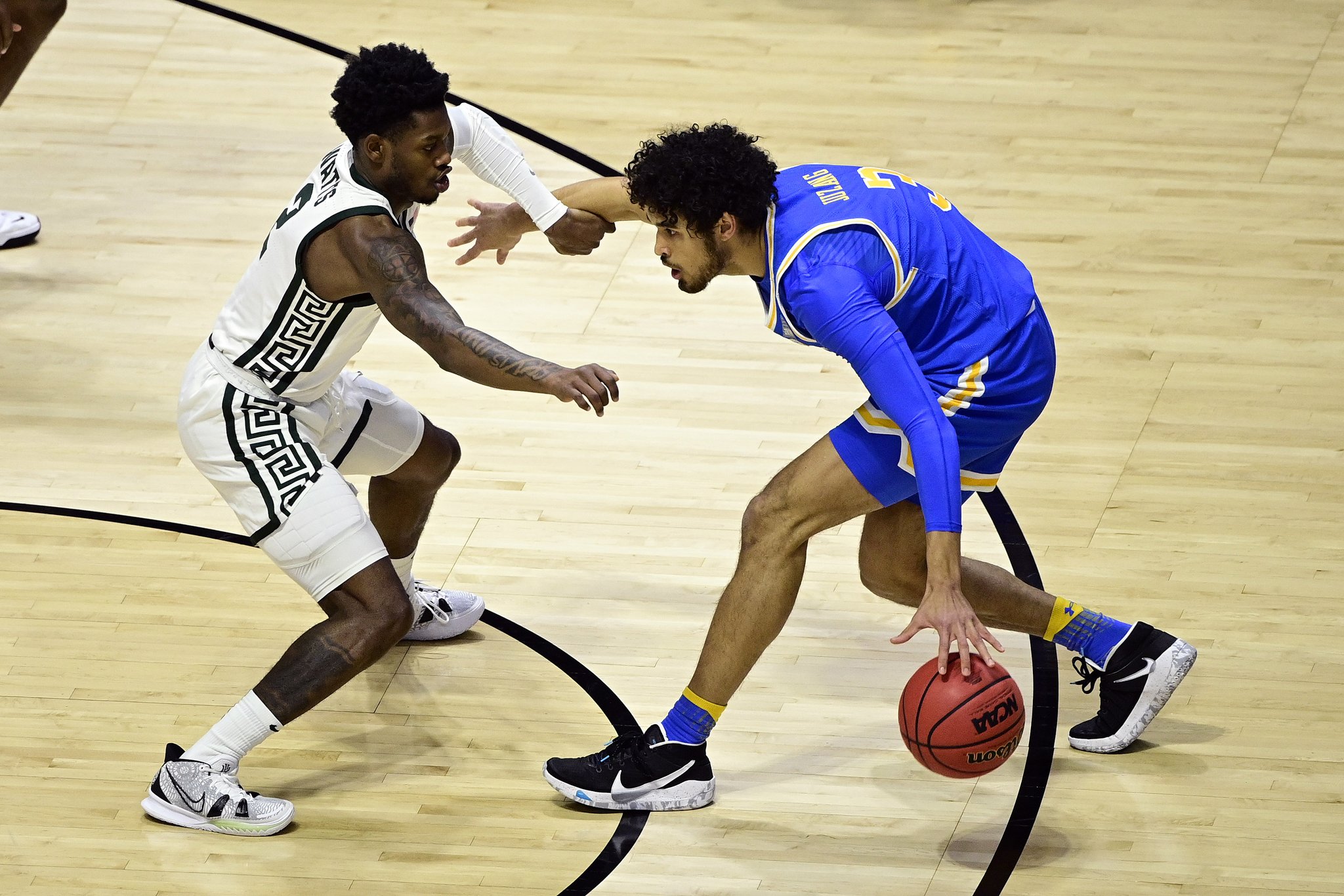 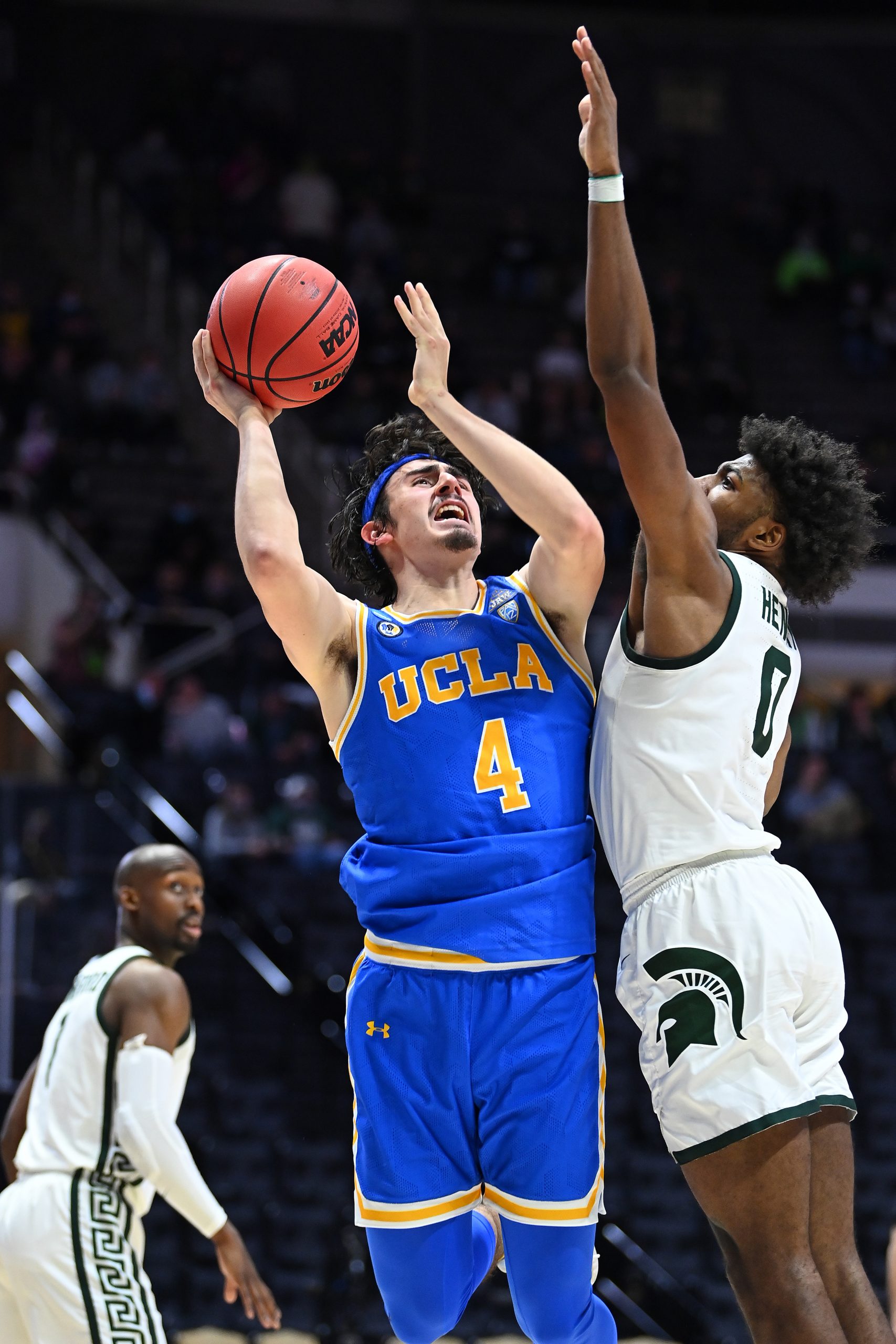 WEST LAFAYETTE, IN - MARCH 18: Jaime Jaquez Jr. #4 of the UCLA Bruins shoots against Aaron Henry #0 of the Michigan State Spartans in the First Four round of the 2021 NCAA Division I Men’s Basketball Tournament held at Mackey Arena on March 18, 2021 in West Lafayette, Indiana. (Photo by Andy Hancock/NCAA Photos via Getty Images) 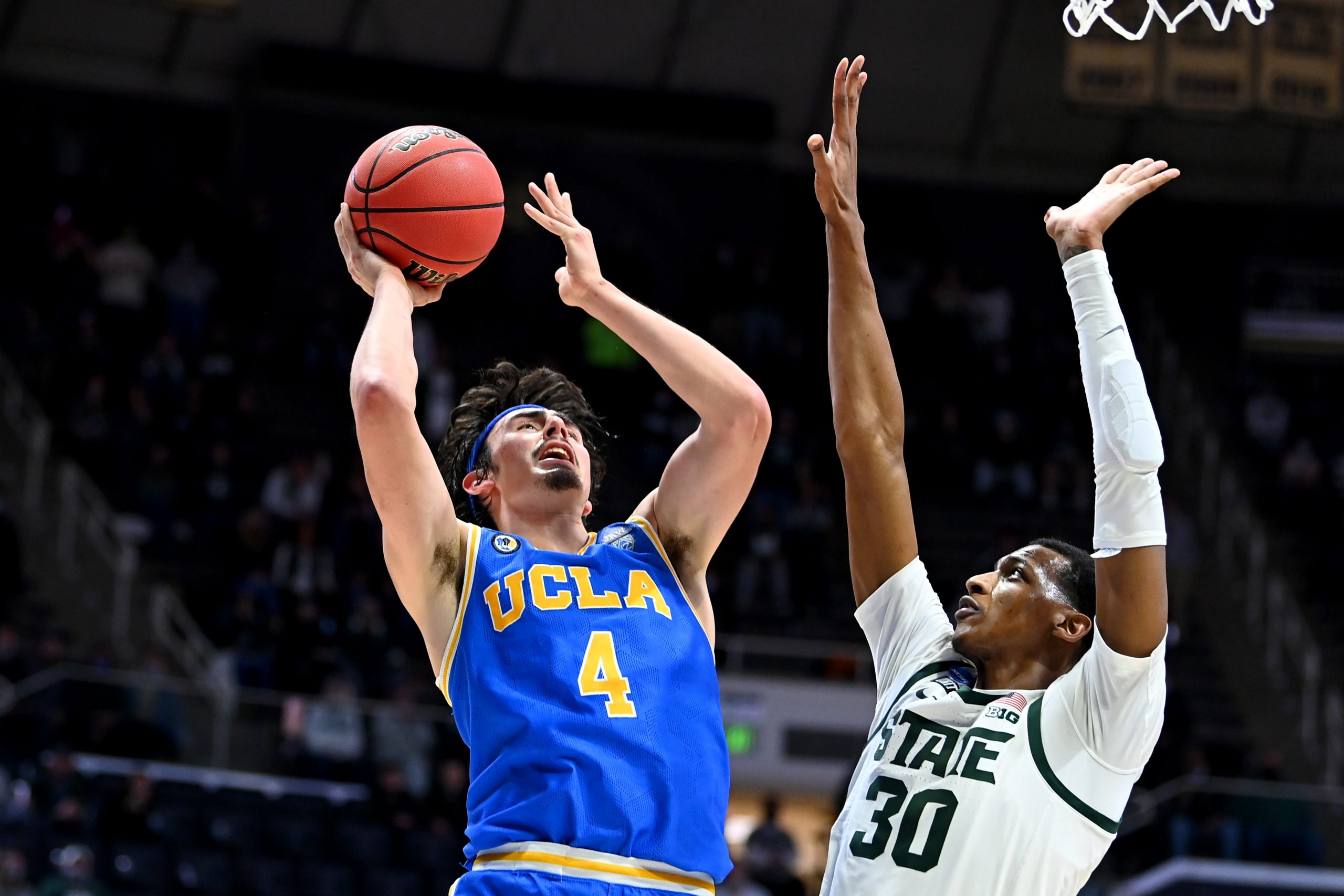 WEST LAFAYETTE, IN - MARCH 18: Marcus Bingham Jr. #30 of the Michigan State Spartans defends Jaime Jaquez Jr. #4 of the UCLA Bruins in the First Four round of the 2021 NCAA Division I MenÕs Basketball Tournament held at Mackey Arena on March 18, 2021 in West Lafayette, Indiana. (Photo by Andy Hancock/NCAA Photos via Getty Images) 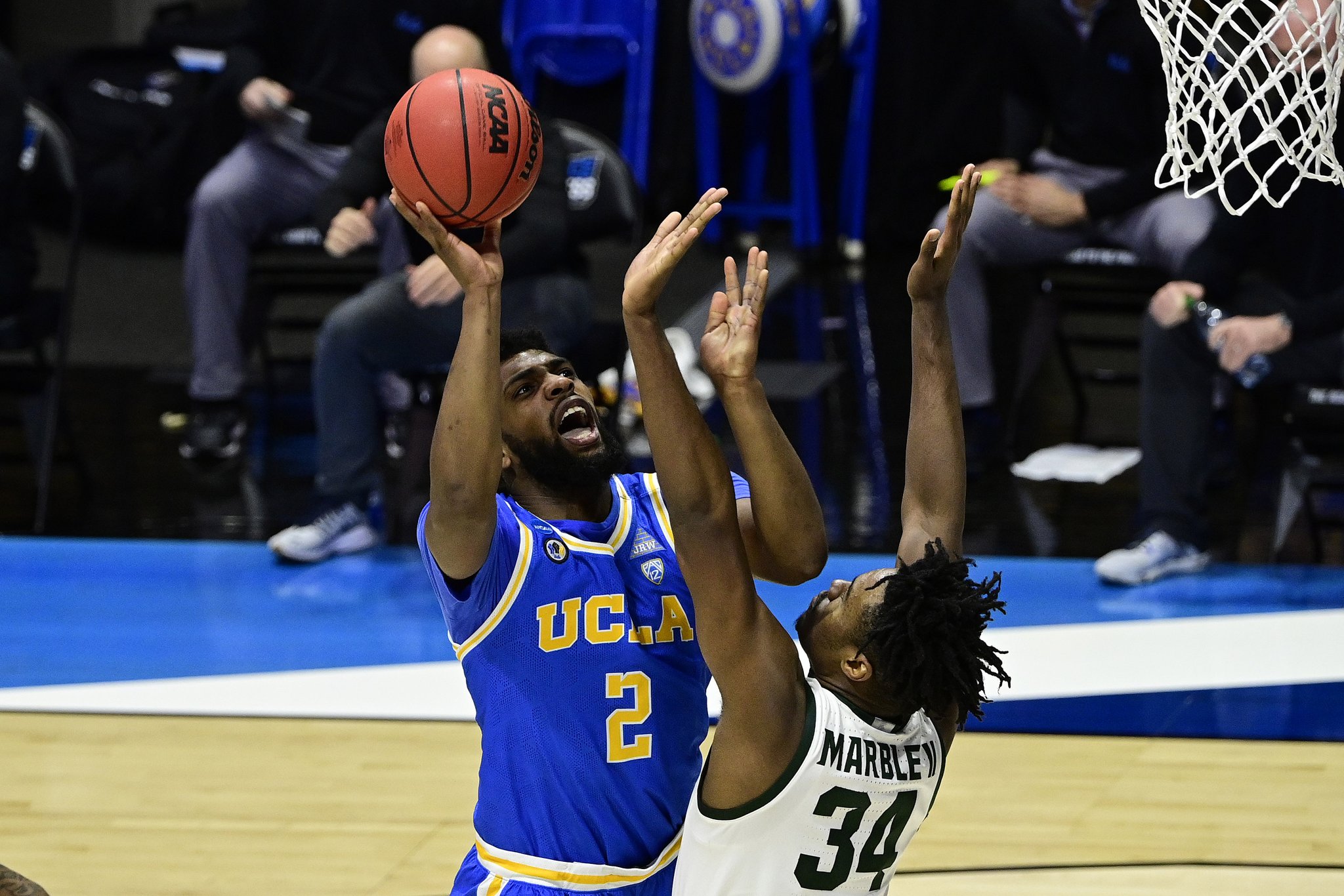 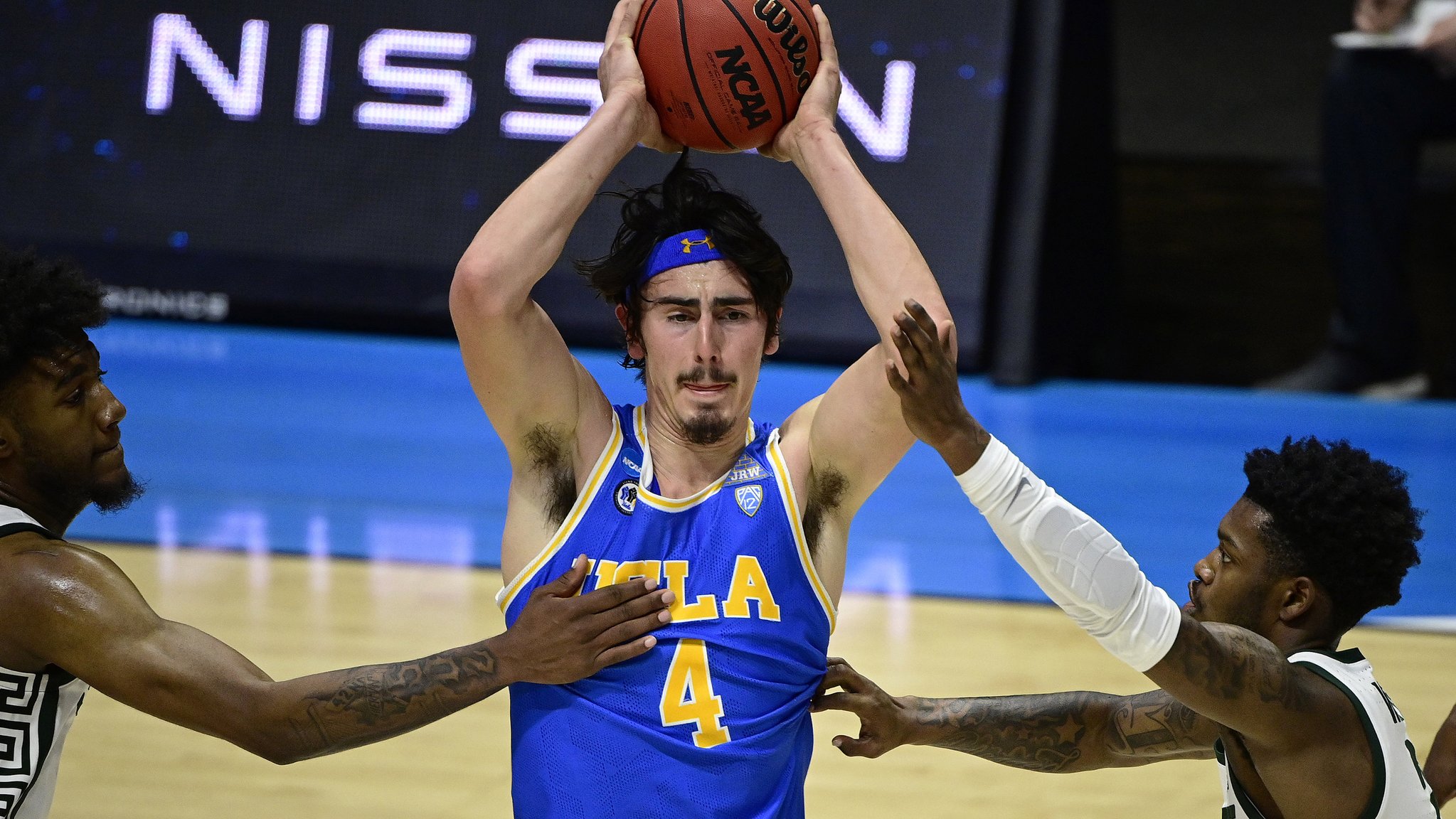 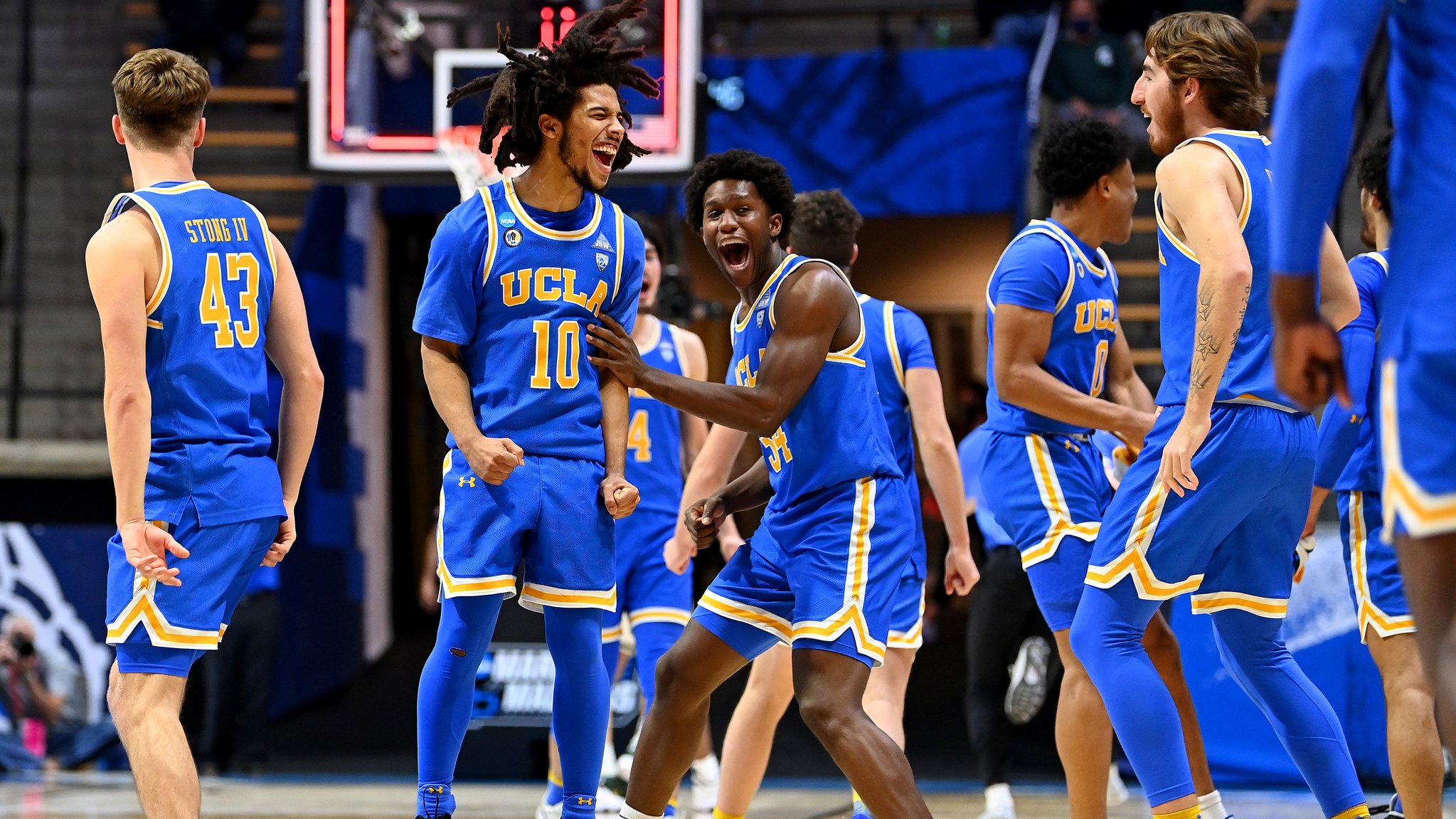 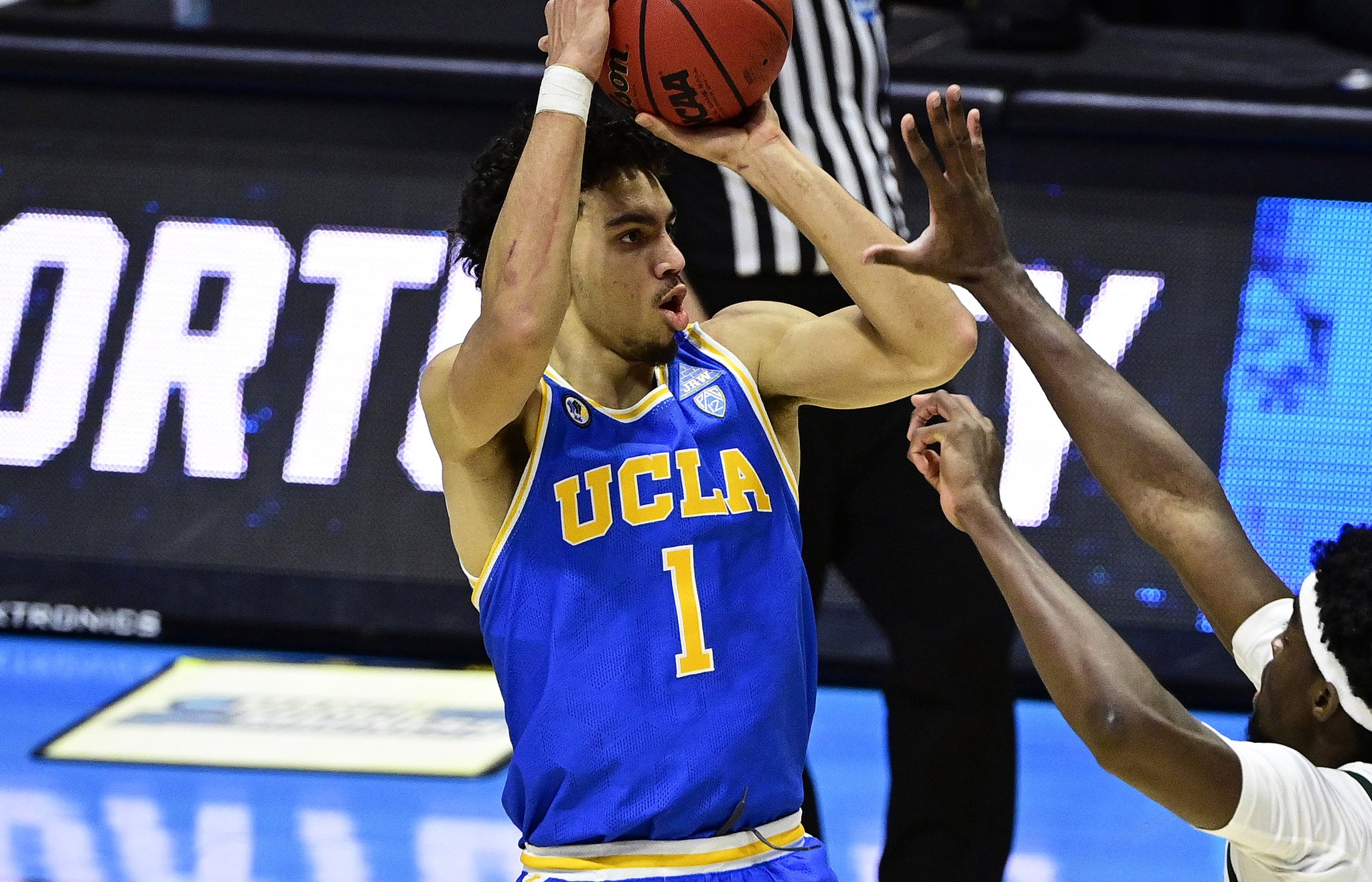 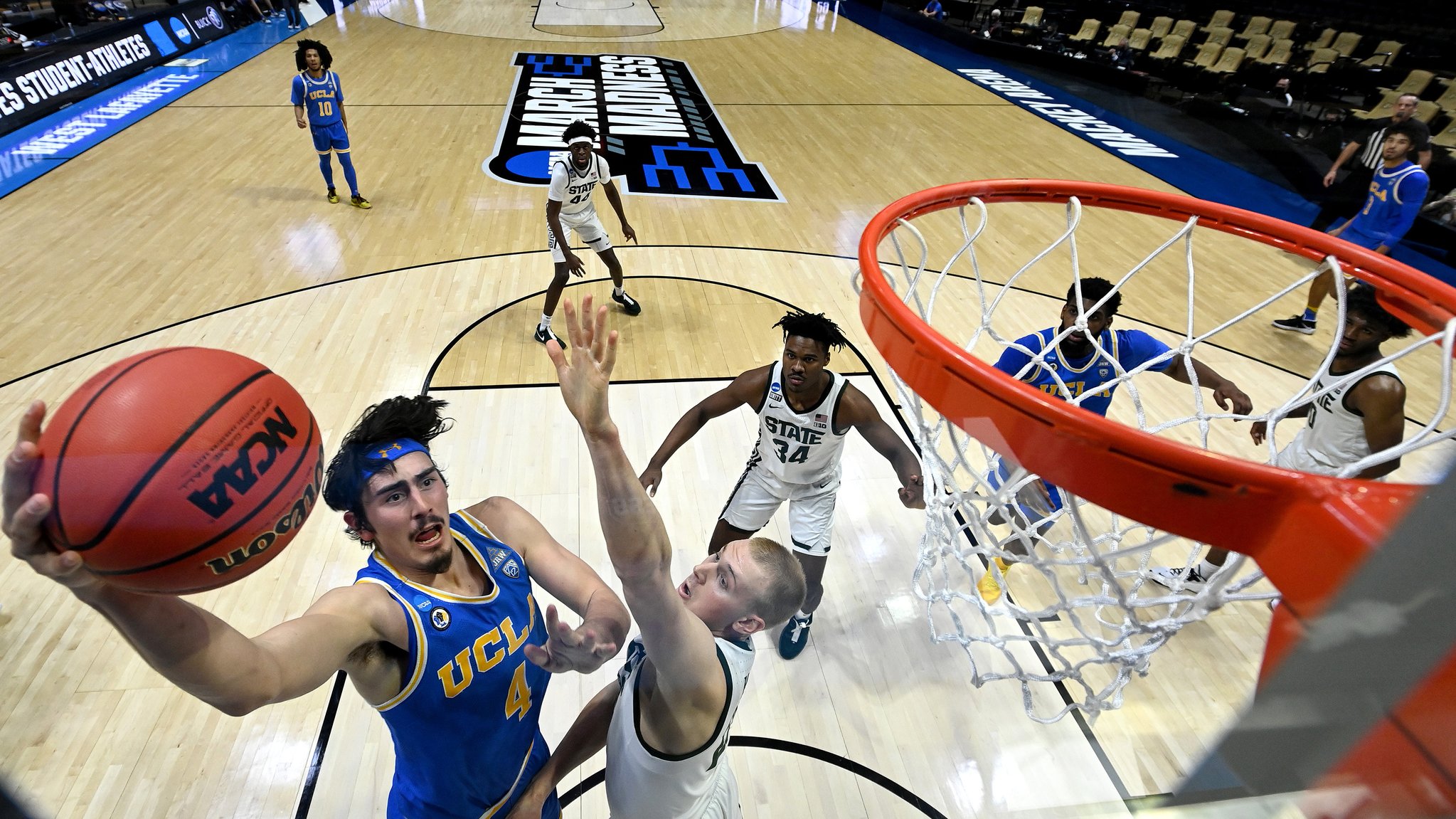 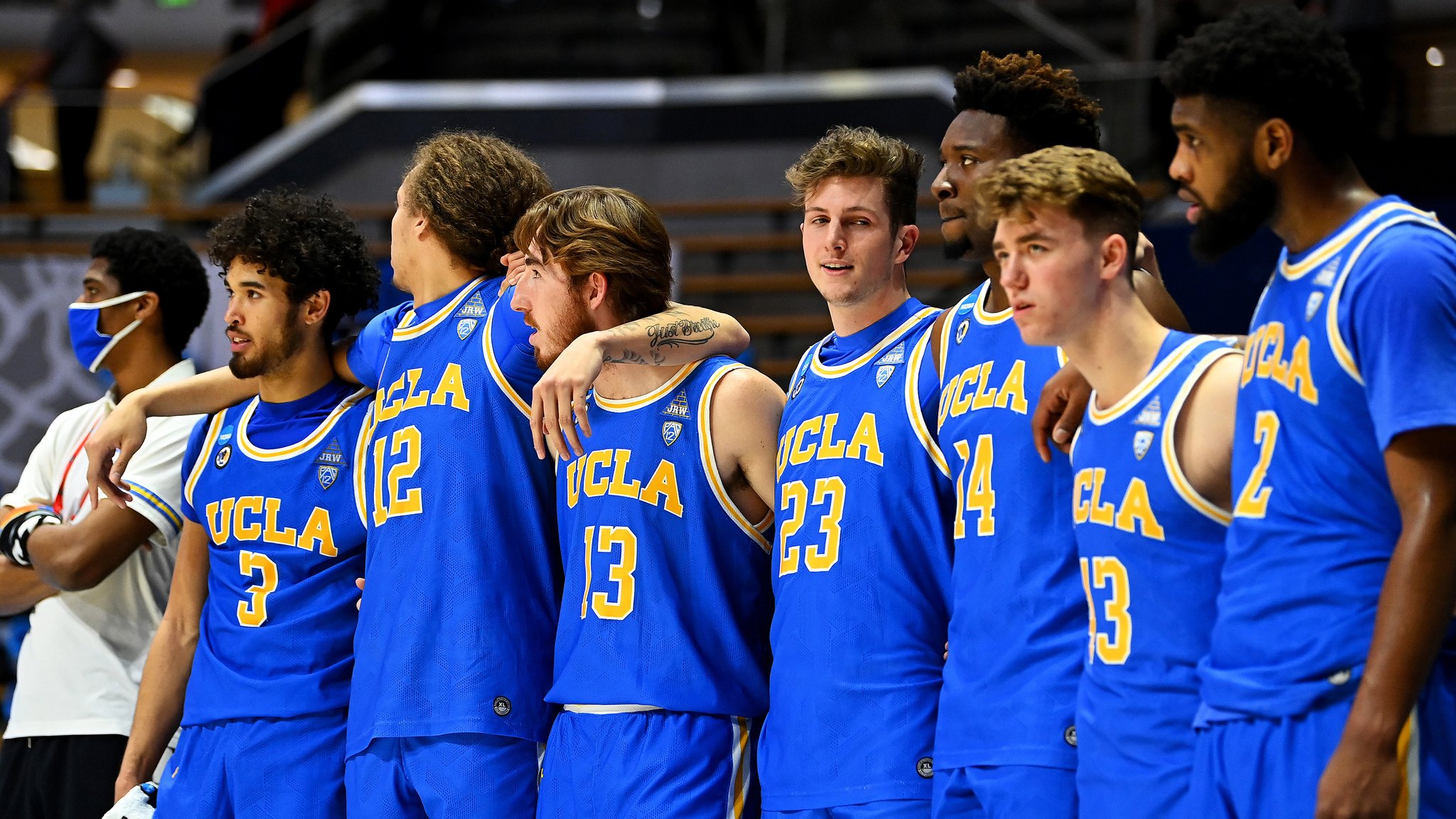 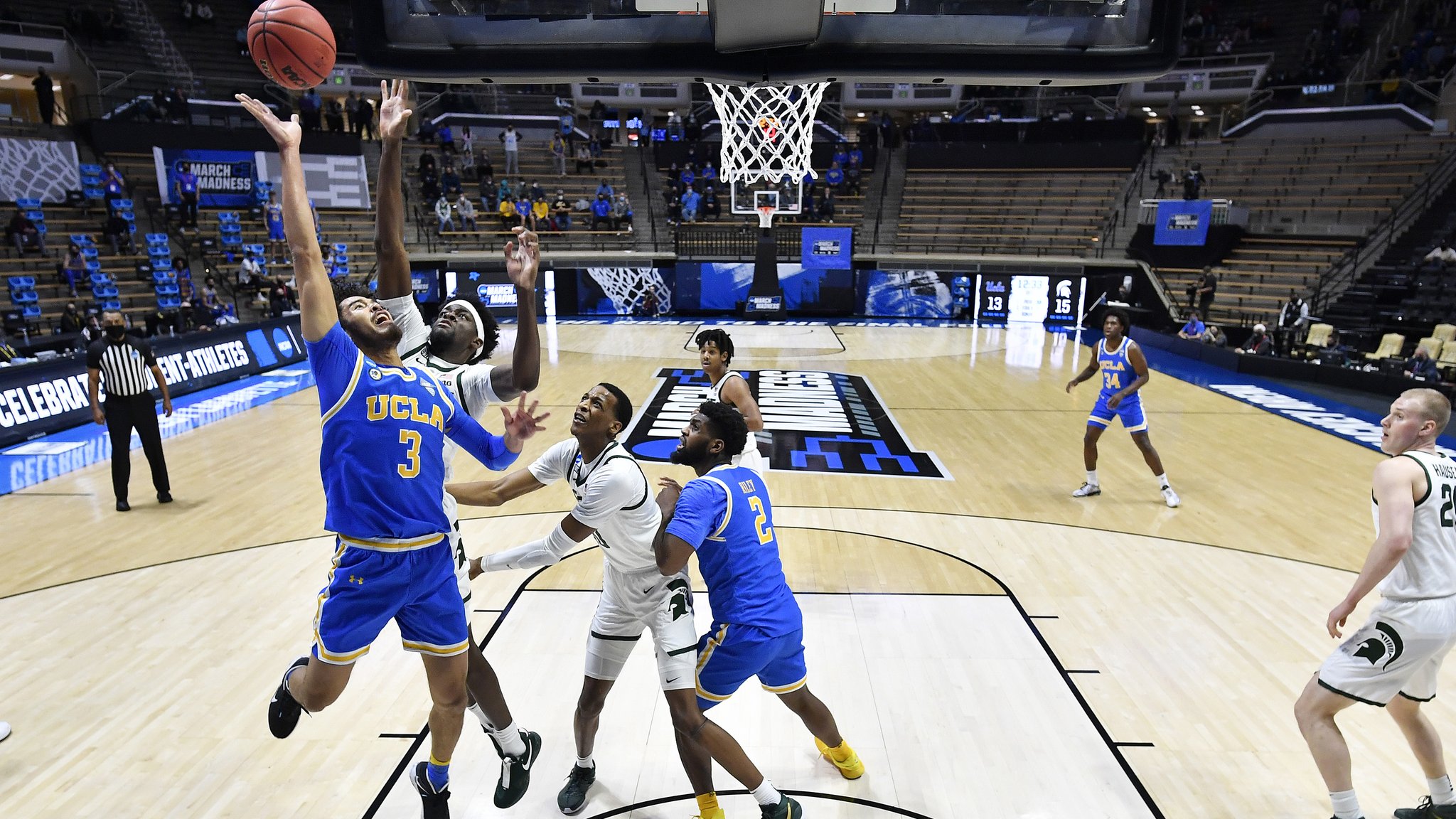 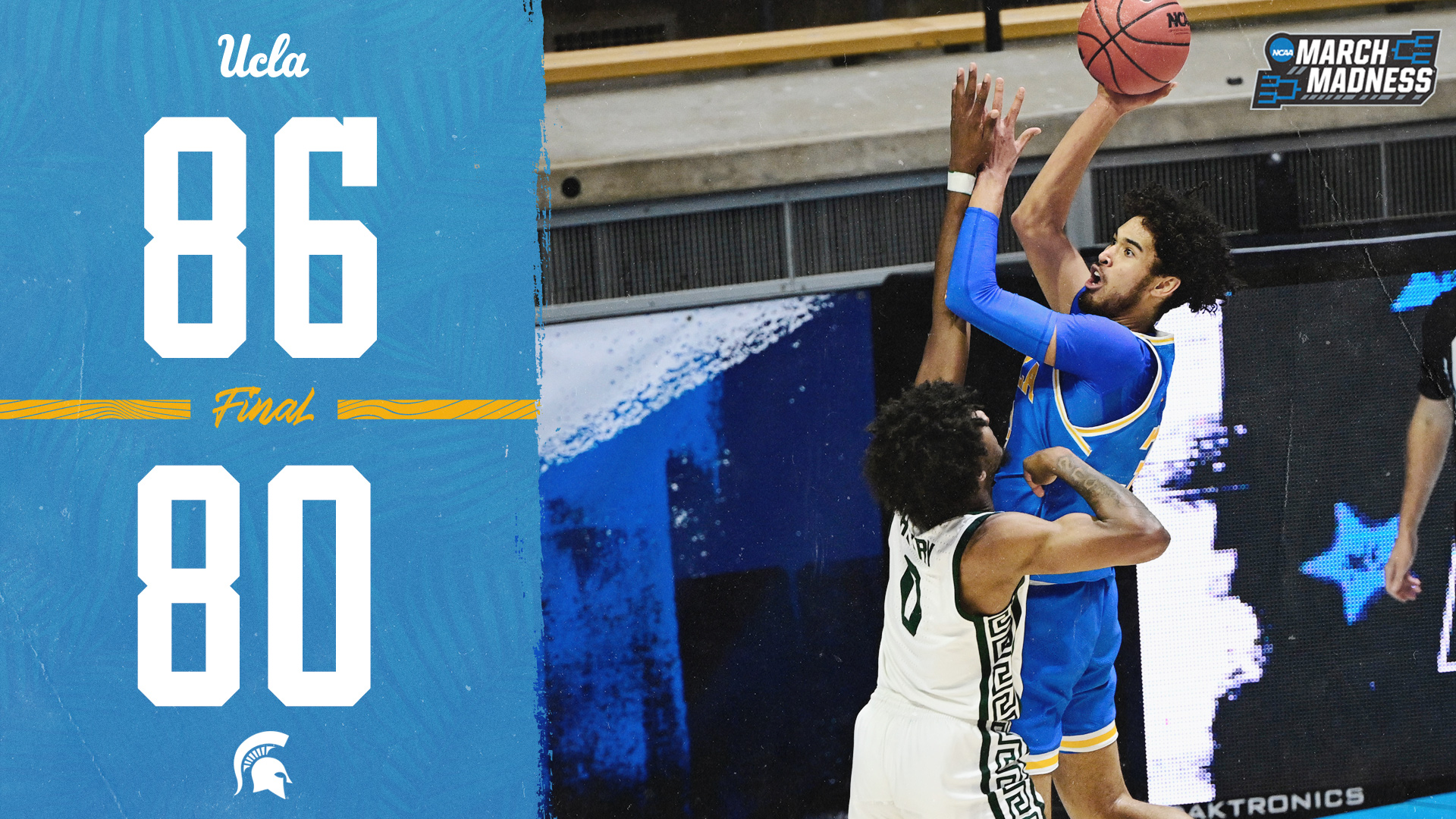 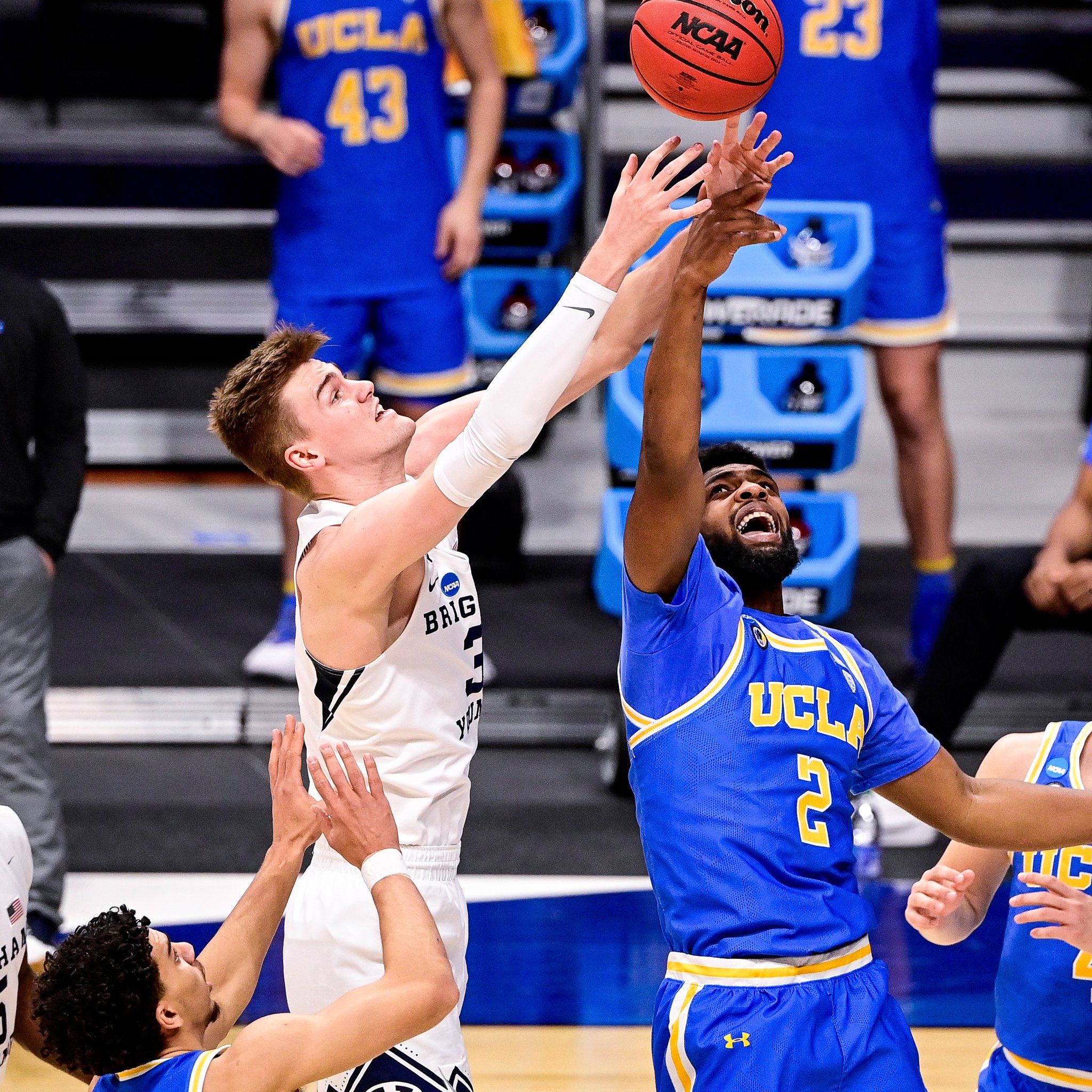 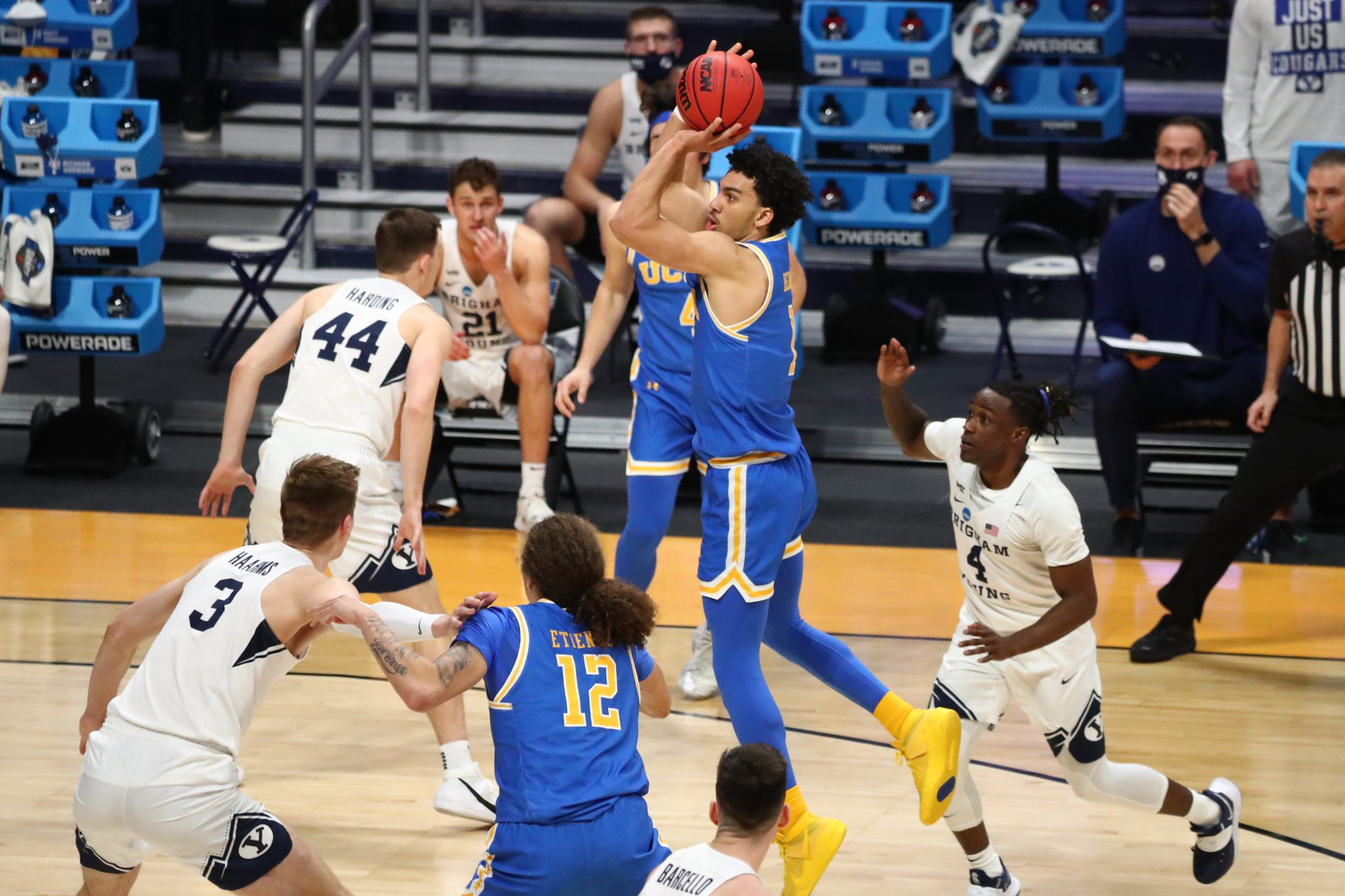 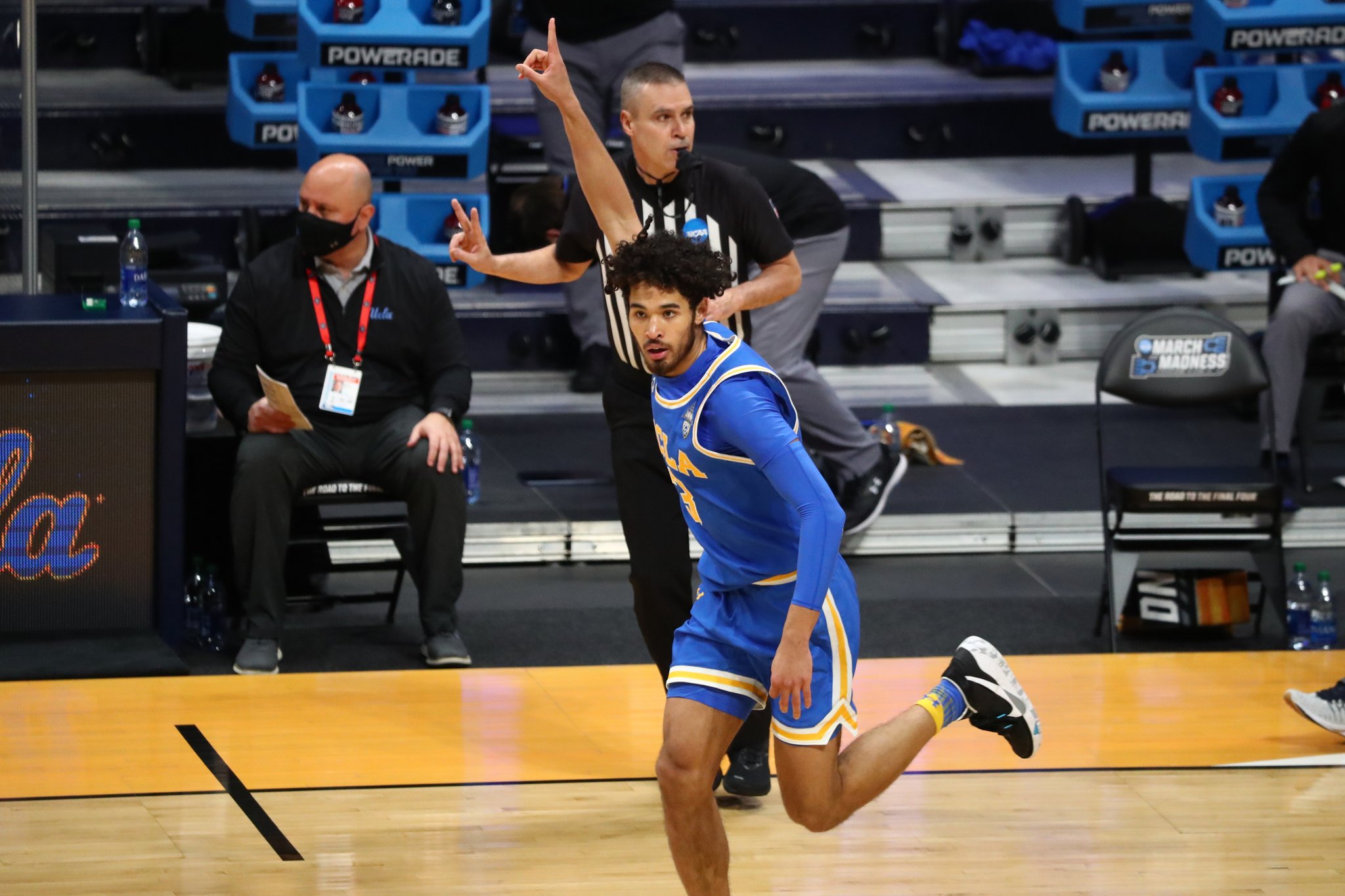 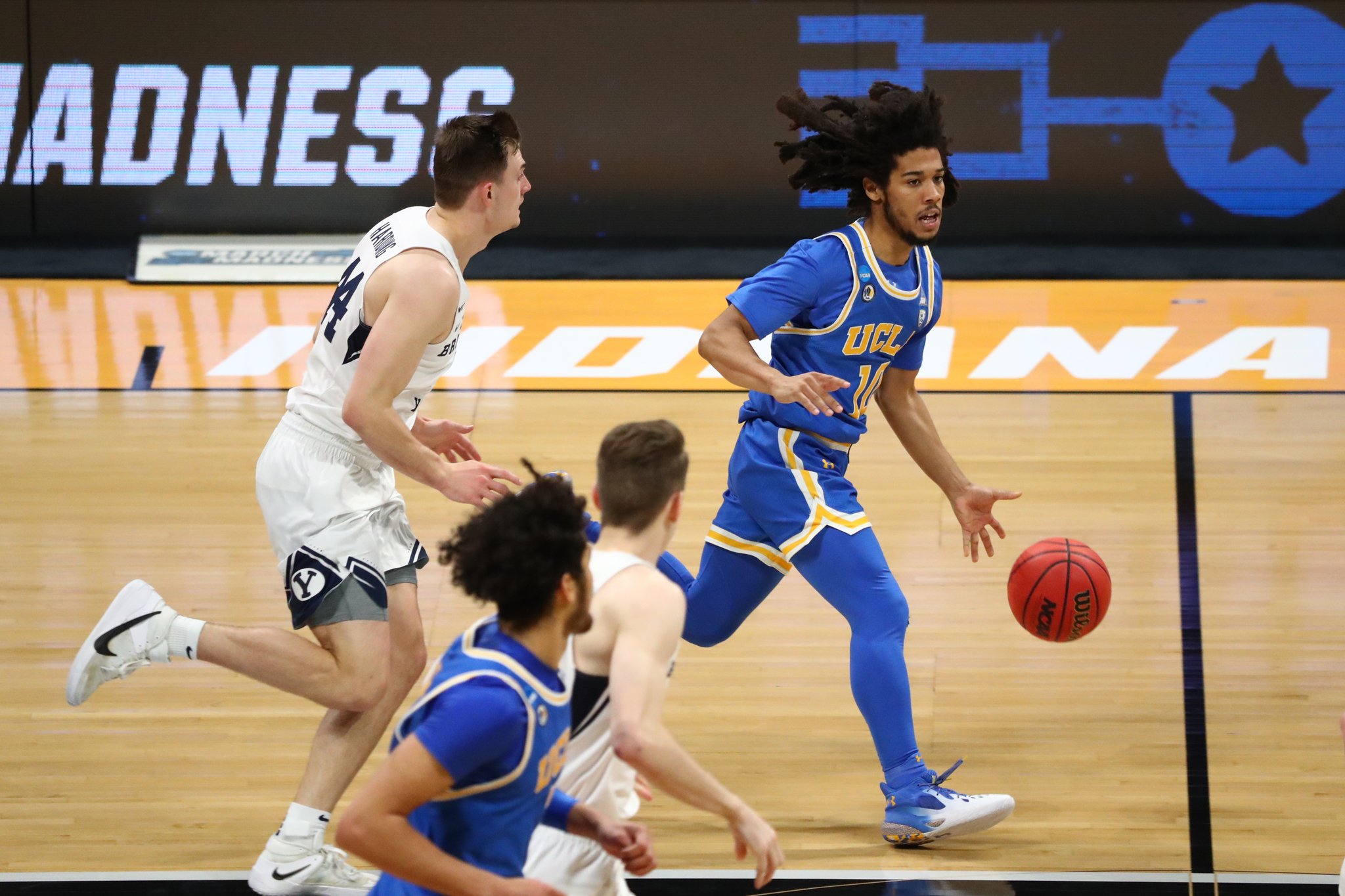 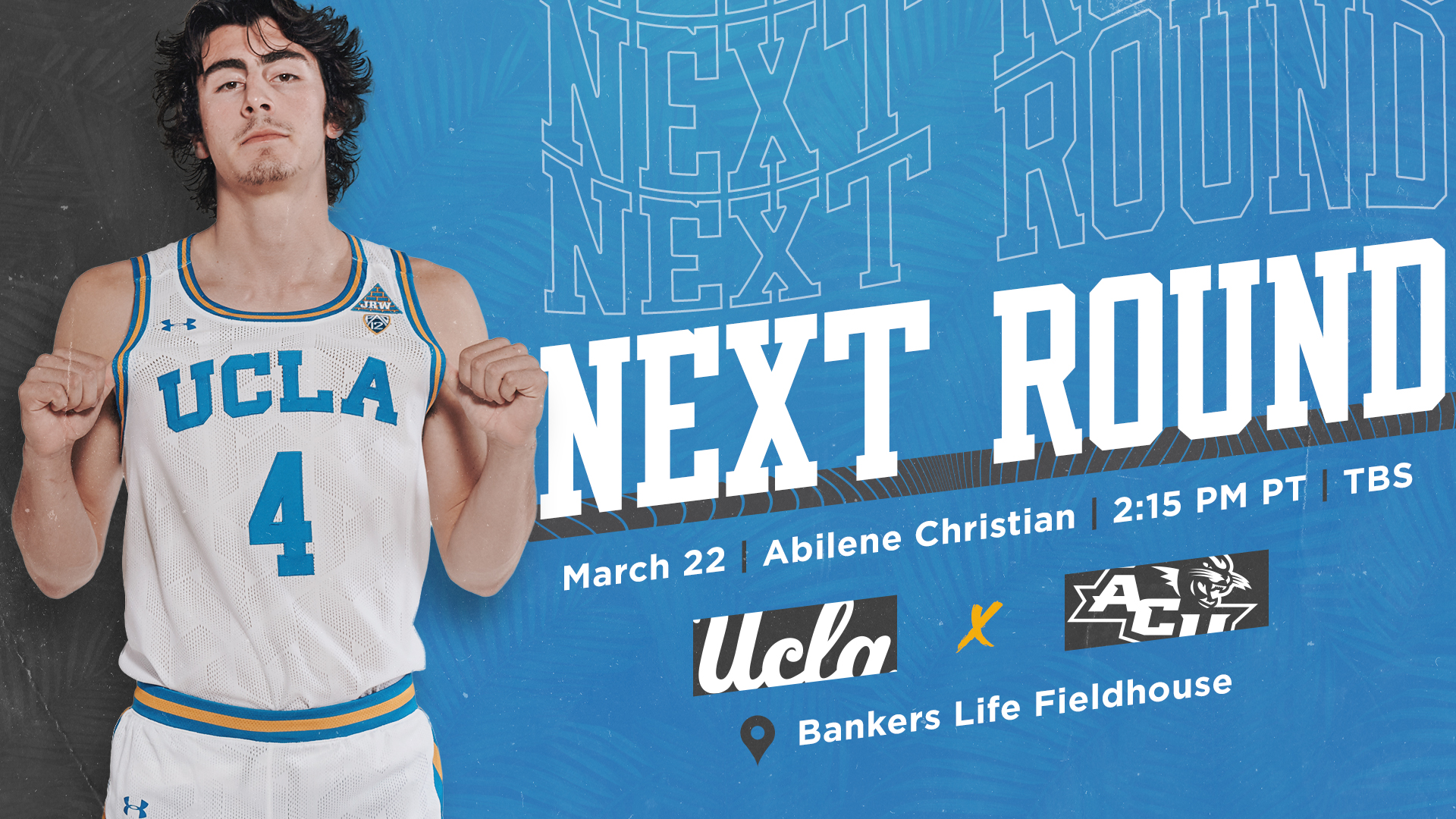 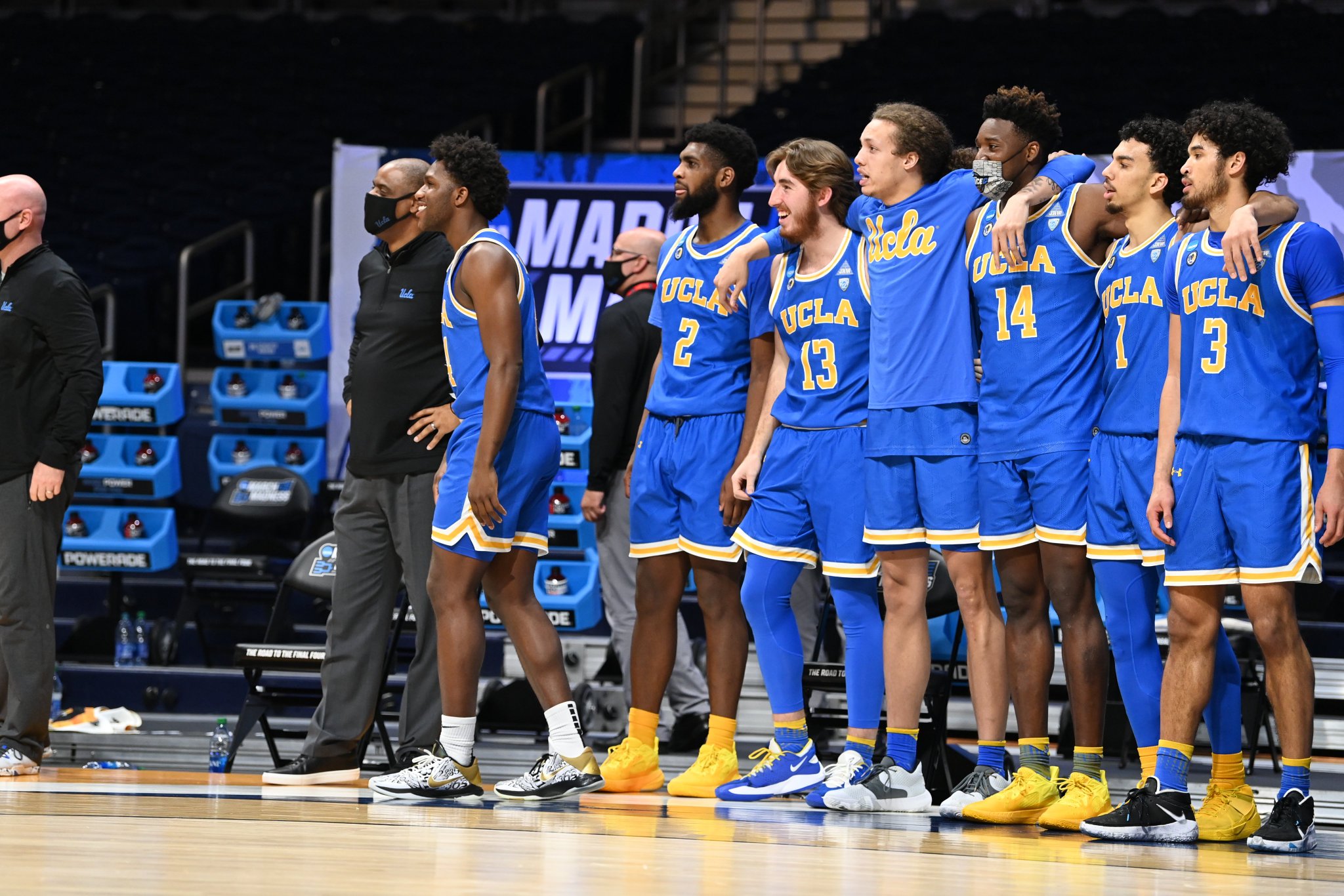 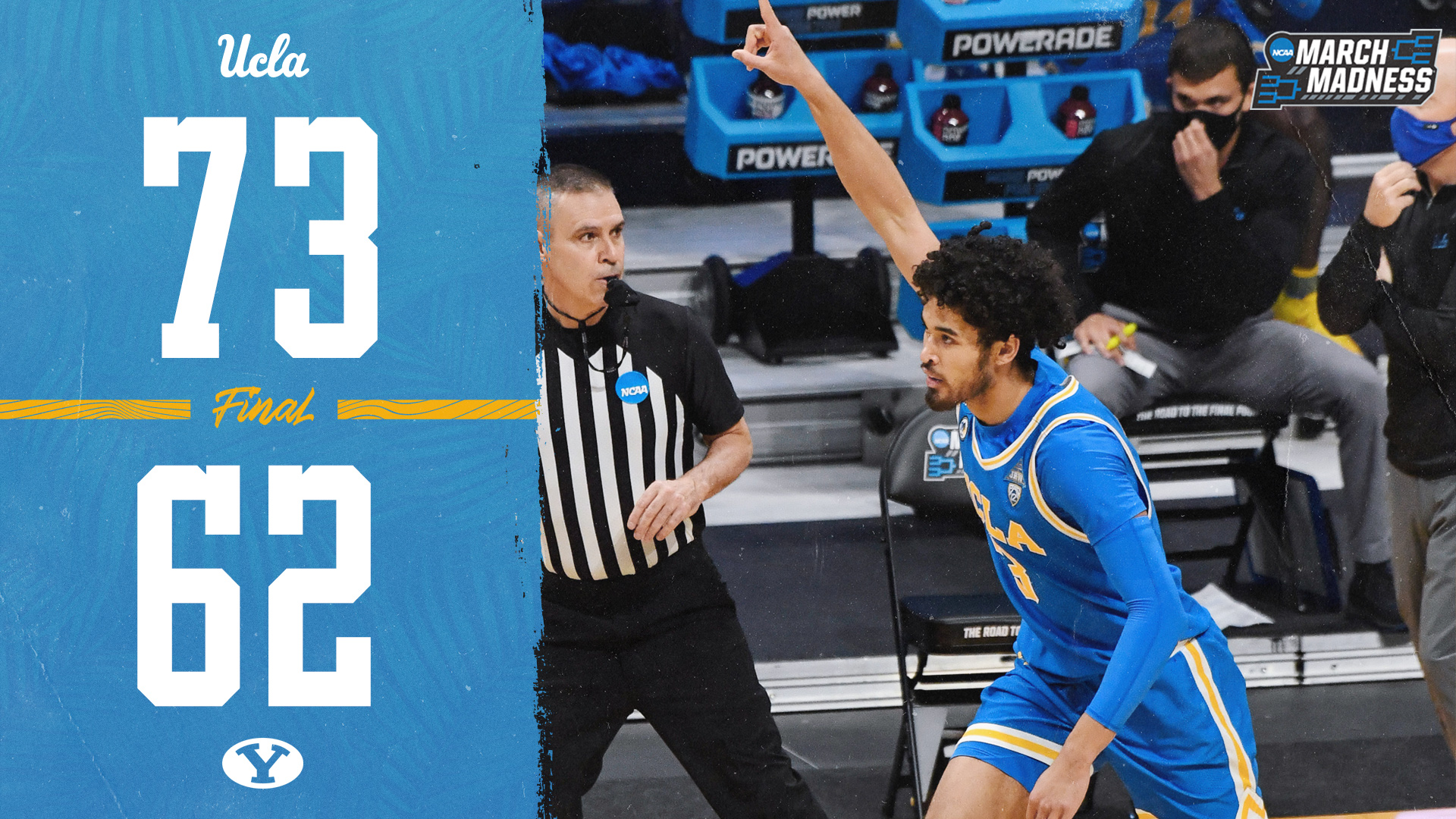 Let’s now summarize both games. First up, the outstanding play of the team against Michigan State was highlighted by the explosive (27) point performance by sophomore, 6-6/#4 Jaime Jaquez, Jr., the Camarillo, CA native and Camarillo HS stand-out. He also hauled down (4) rebounds and had (2) assists. In addition, Jaquez, Jr. played the entire 40 minute game and the extra 5 minute OT period. Joining Jaime in the scoring was #3 Johnny Juzang, the former Harvard-Westlake “Wolverine” standout who attended Kentucky University last year, but after not getting much playing time, then transferred to UCLA. The Bruins had the last shot in regulation but it was a bit too far for Juzang. It got close, but hit the rim and then skipped away. The score at the end of regulation was (77-77).

But, in OT it was the exceptional play of Cody Riley, the Sierra Canyon alum, that took center stage and the Bruins to the victory. It was a huge redemption for Riley since he was foul-plagued for most of the game and only saw limited minutes. However, in the OT, he scored (7) key points of the team’s (9), giving the Bruins the padding they needed to pull off the big upset.

For the game, Juzang poured in (23) points and grabbed (4) boards, with (2) assists. Also scoring in double figures were Cody Riley and Jules Bernard, both finishing with (11) points. Bernard added (8) rebounds and Riley had (6).

Now, we go over to the BYU game, and although it was first diagnosed as a possible sprained ankle suffered in the Michigan State game, Juzang came in “fired up & ready to go” only to pick up from where he left-off in the Michigan State game, and dropped in (19) first-half points that greatly helped to give the Bruins a (9) point half-time lead. Meanwhile, Jacquez, Jr. was busy on offense as well, and to show-off his dunking ability in grand style, after beating his man on the dribble from the upper left side of the key, drove the lane with his left hand, elevated at just the right time, and threw down an emphatic 2-handed dunk. That play happened just before the end the first-half and moved the score to (38-25). The half ended with the score reading, UCLA 38, BYU 27.

The second half was tense from the 20 minute mark down to the 10 minute point, when BYU managed to draw close to the Bruins with their baseline-drive penetrations and kick-outs to their perimeter shooters. That stretch of time produced (8) points quickly and drew the score to just UCLA 63-BYU 57. This caused some concern for Bruins Coach, Mick Cronin. But with a great substitution pattern, the Bruins then started to pull away. Lots of damage was done offensively by starter, Bernard, reserve, David Singleton, the Bishop Montgomery grad, with (4) quick points and some great playmaking by Cody Riley, as they gave the Bruins some breathing room heading into the last 5 minutes of the game. Meanwhile, Juzang, although not hitting many baskets in this half, was very active with his floor play, defense, and rebounding. He would finish the game with (27) points and (5) rebounds. In the half, Jaquez, Jr. was being Jaquez, Jr. as he scored (13) points for the game, hauled in another (8) rebounds, and added (3) assists. And by Coach Cronin’s decision, he played the Jaquez for much of the game, pulling him at the 4 minute mark for a breather. He was then subbed back in for the final 1:30 minutes of the game. Again scoring in double figures was Bernard with (16) points. He also added (5) rebounds, and (1) assist. Point Guard, Tyger Campbell finished with (7) points, (5) assists, and (1) rebound. The game was played at Hinkle Fieldhouse, also with limited in-person attendance.

Of Special Note: Johnny Juzang’s total of (50) points scored in his first two NCAA Tournament games puts him on the list of Top 5  players in UCLA Bruins history to accomplish the feat.

The final score of the game was Bruins 73, BYU 62. And now the #11 seeded Eastern Region Bruins will come back on Monday to play the #14 seeded Texas Abilene Christian Wildcats in the 2nd Round of 32.

Game Media Broadcasts will be found on TBS at 2:15 pm (PT) and on Local Radio, 570 AM. To follow the Bruins go to Twitter @UCLAMBB. So, All Bruin fans, get ready for that strong “8-Clap” during the game.