(East Los Angeles CA) March 18, 2022 [From The Editor’s Desk]: On a very cool and early March winter night in the City of Angels, the LAFC Black & Gold took to their Banc of California’s pitch in quest of their second early season victory, to battle the always dangerous and competitive MLS’ Pacific Division’s Portland Timbers. The visitors were led into the match by their veteran core group of Yimmi Chara, Diego Charra (Captain), and Dairon Asprilla.

{Pre-Match VIP/Celebrity Festivities} To open the evening, the always dynamic Falcon Flight performance by “Olly” merited an appearance by Kevin Frazier, the well-known Hollywood producer, co-host of Entertainment Tonight, and the Falcon Flight assistant to Ken Miknuk, along with the always vibrant Grupo 3252, and lastly, Weston McKinnie, the Team’s Special guest from the U.S. Men’s National Team (USMNT), out for rest of season with a foot injury. And thus the stage was set.

[Match Summary]: Quickly setting the visitor’s tone were their block of fans who led off the match’s cheering with their first and very noticeable vocal salvo. When Grupo 3252 was ready with theirs, they came roaring out on a very measured and stacatto-laced reciprocal tone.

The first (10:00) minutes of the encounter was fairly even with shots on goal favoring the Timbers. The Black & Gold were playing good positioning on defense but with no major rhythmic attacks in the offing. Then at the (13:00) minute mark, Head Coach Steve Cherundolo made his first substitution when he sent in #24, Defender, Ryan Hollingshead for #2, Defender, Franco Escobar. Then the Timbers struck gold with a “flash” goal by #23/Yimmi Chara as he recovered a missed attempt by his teammate, but then managed to confront the sphere as it was still in play, and then miraculously “back-flipped” it in from the far right flank, angling it into the right corner back of the netting, (1 -0) Portland, at the (18:00) minute mark. At the (22:00) minute mark Referee, Ismael Elfath brought Cristian “Chicho”Arango and #22/Cristhian Paredes together for a “face-to-face” chat about the play that sent both players to the turf, writhing in obvious pain. Next, a Yellow card was issued to LAFC’s, Ryan Hollingshead in the 25th minute. 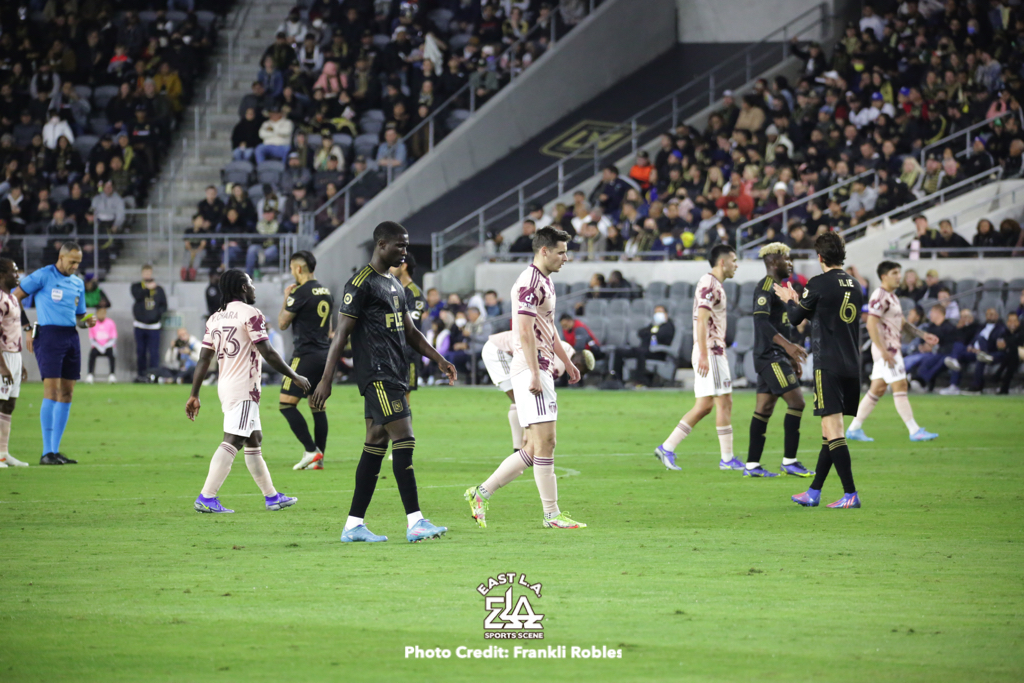 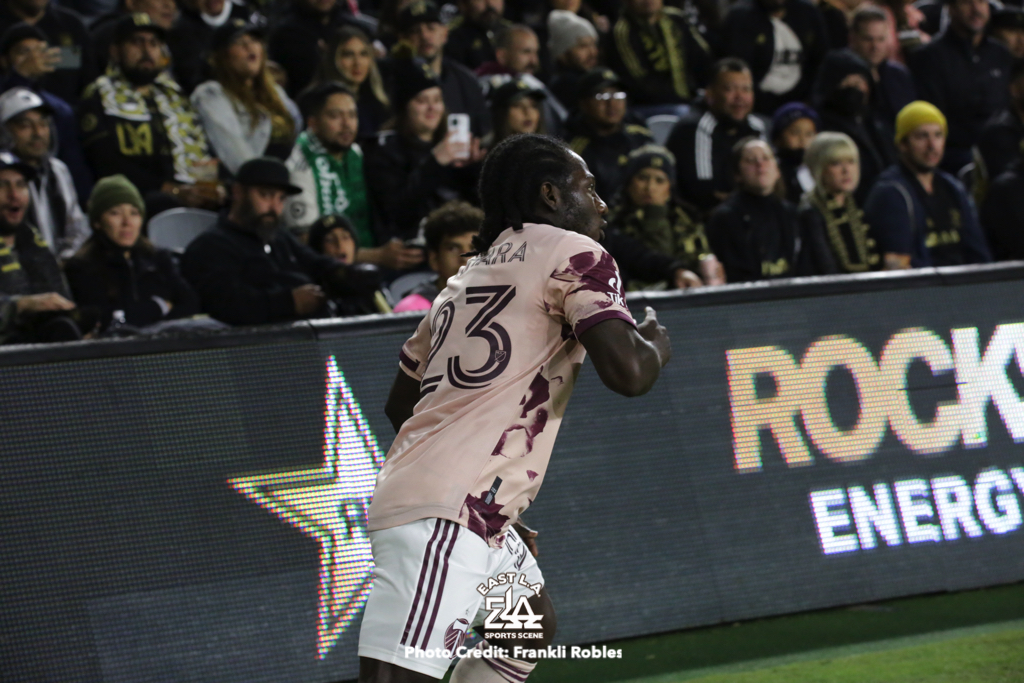 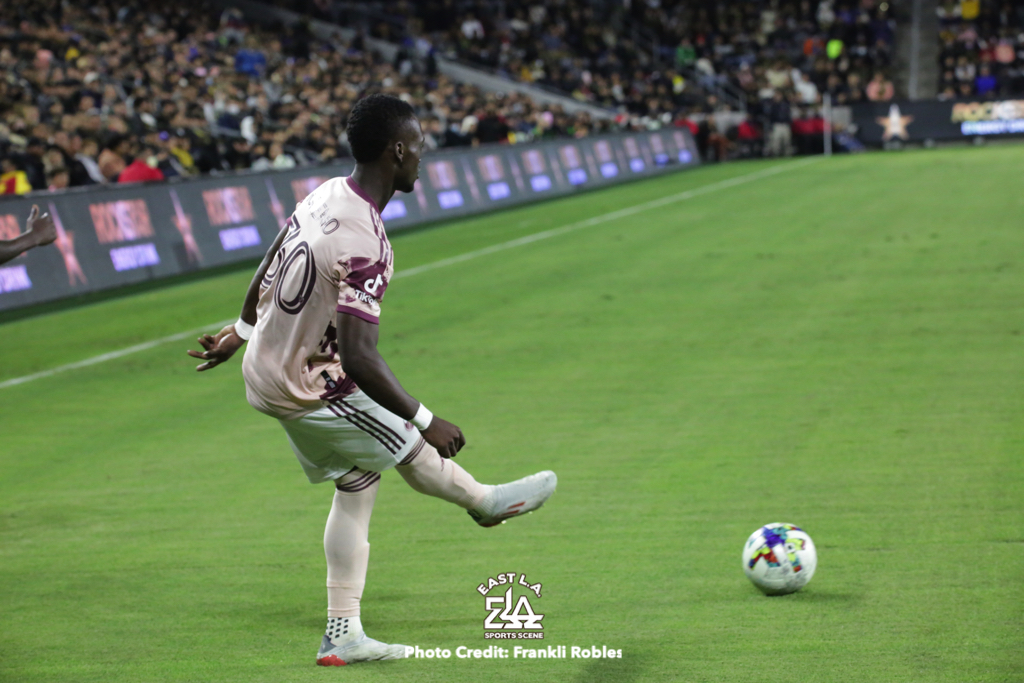 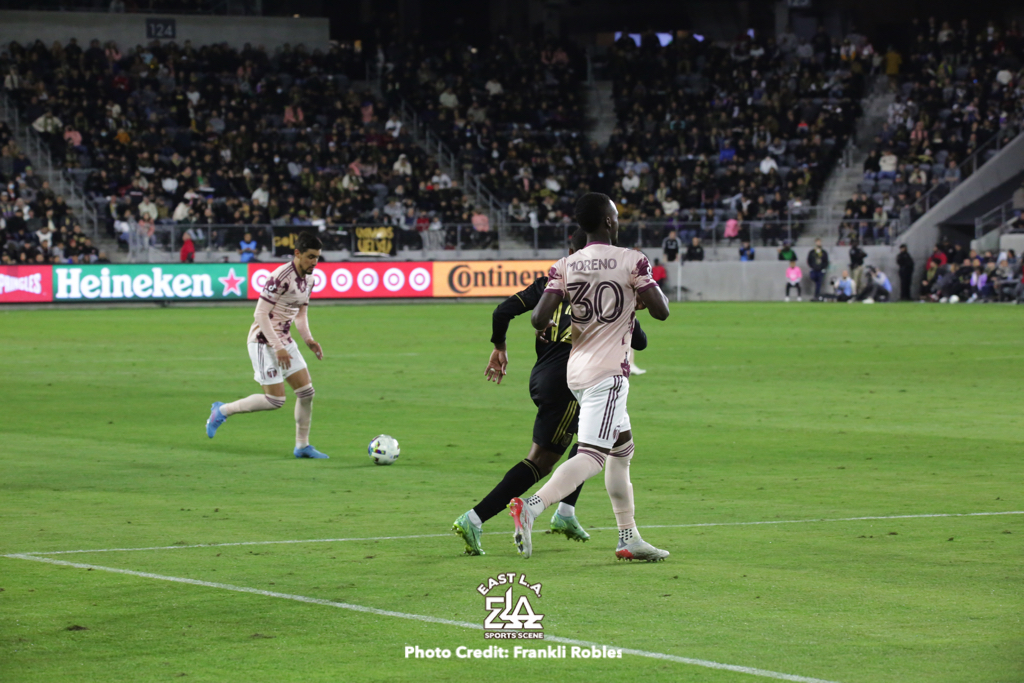 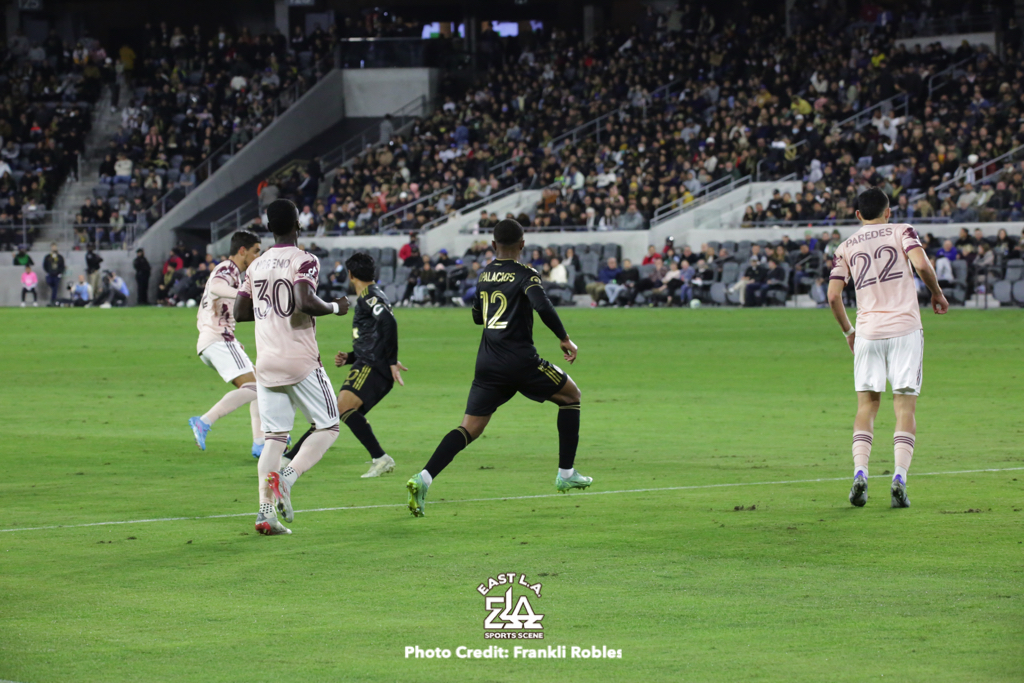 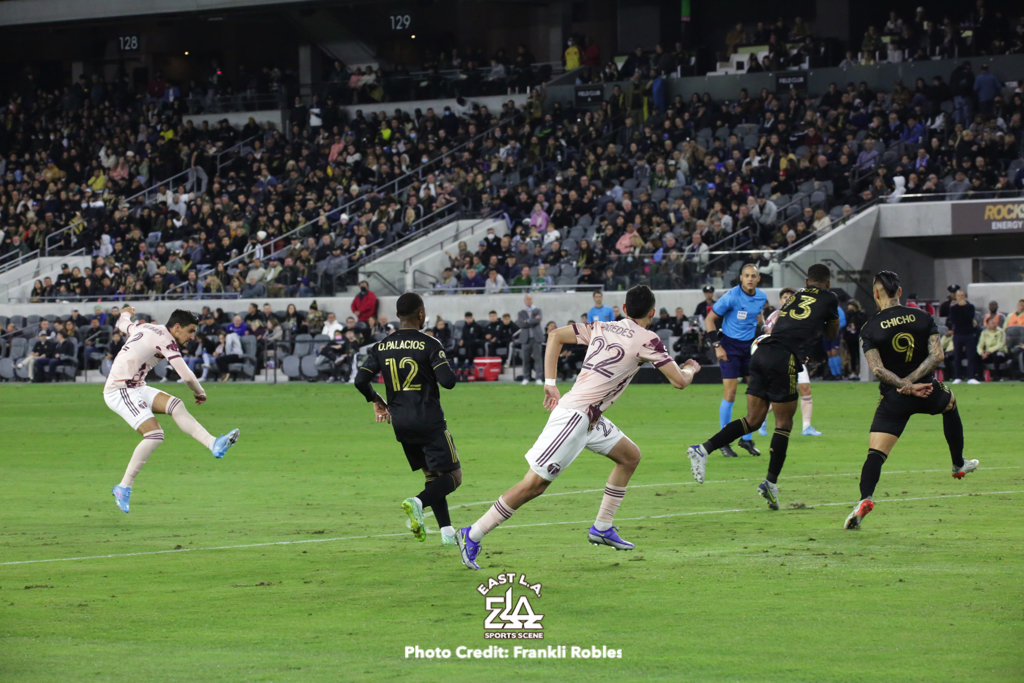 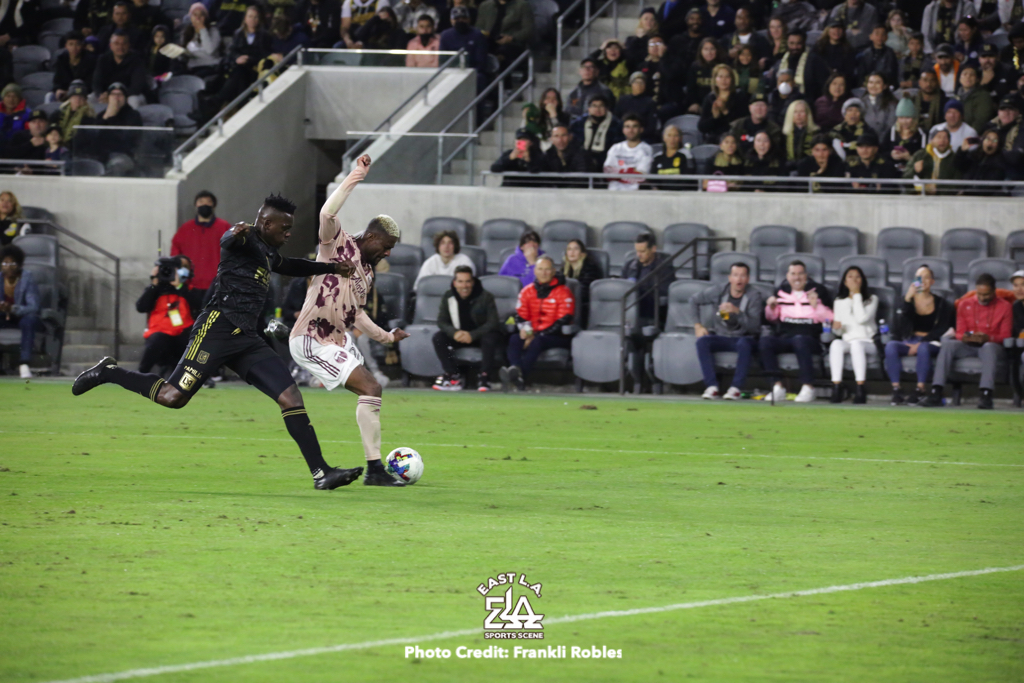 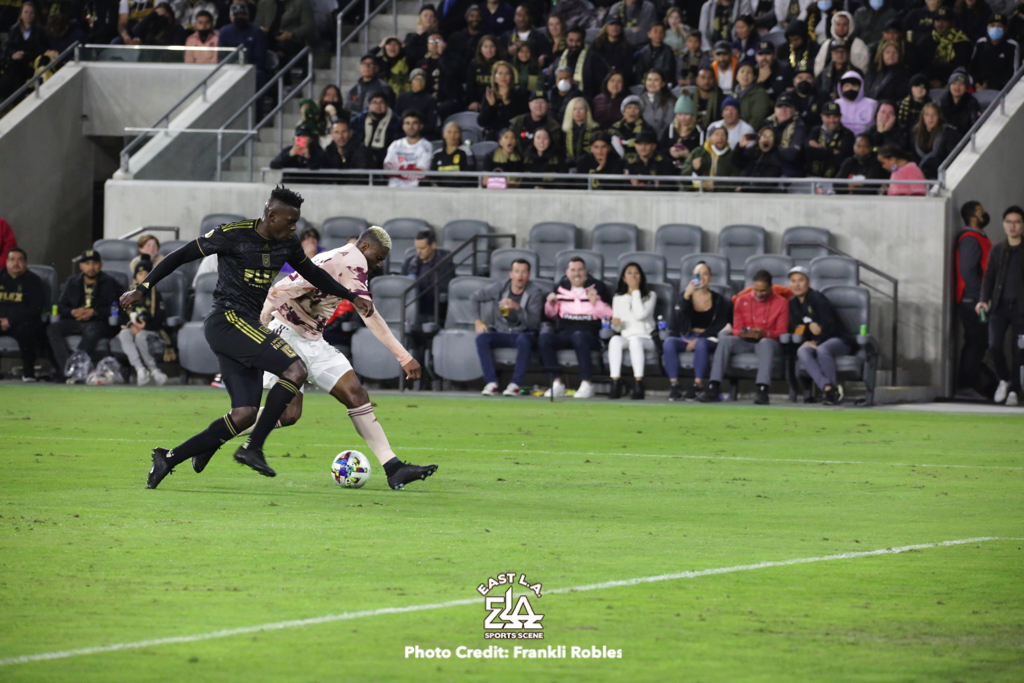 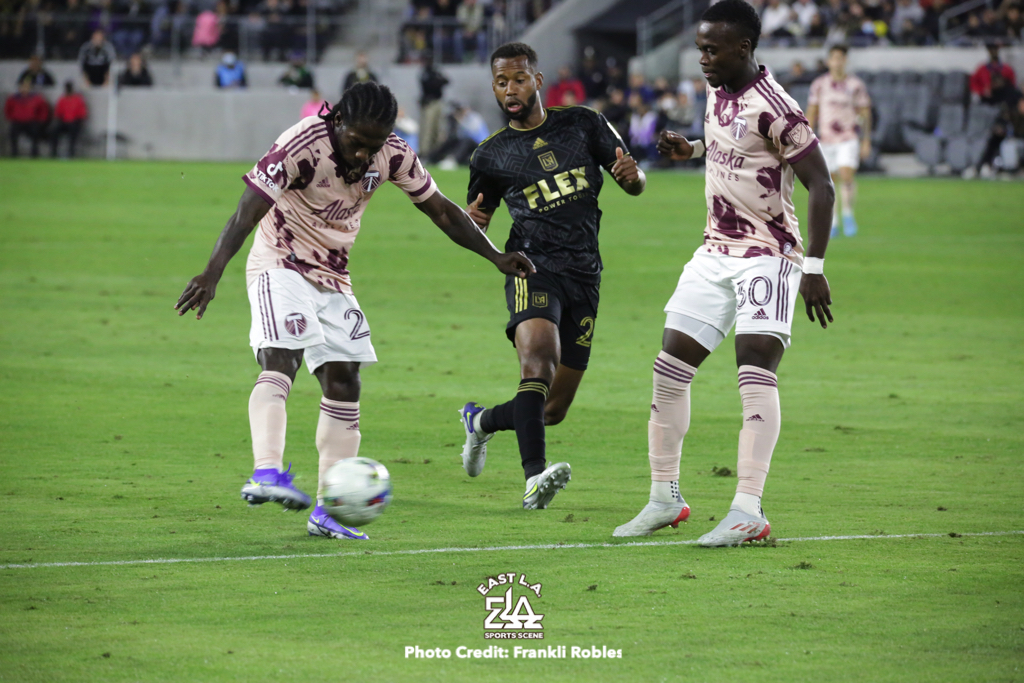 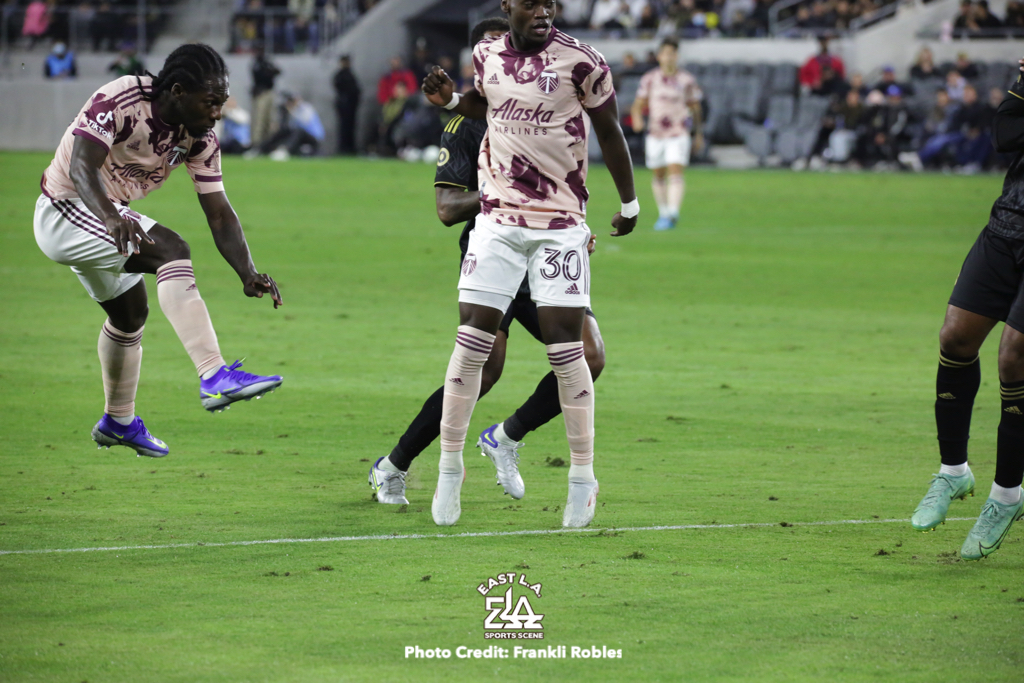 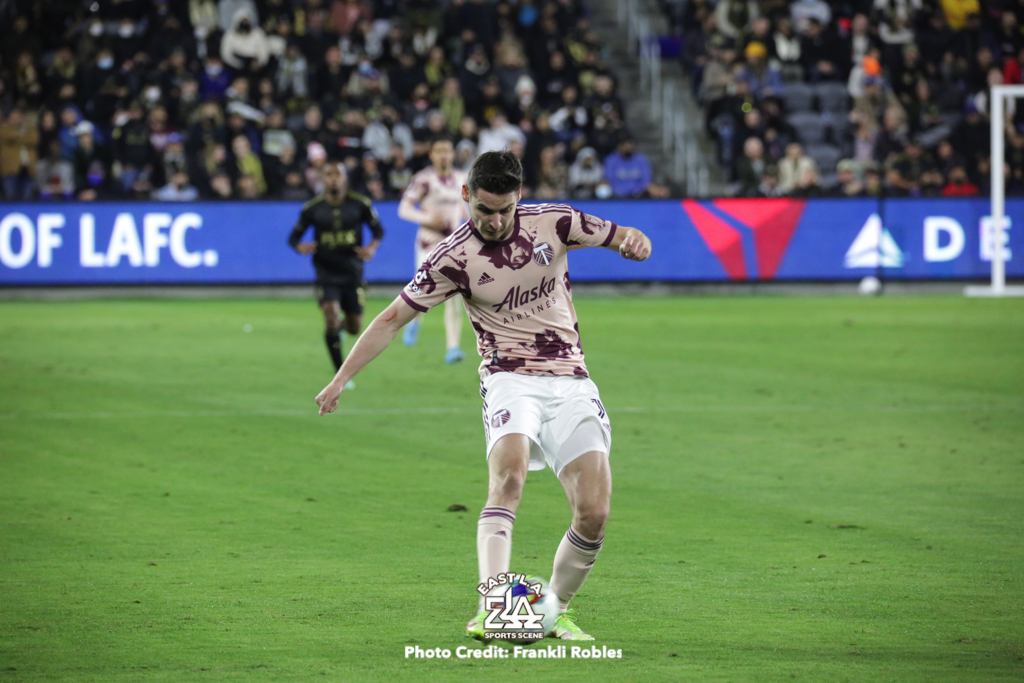 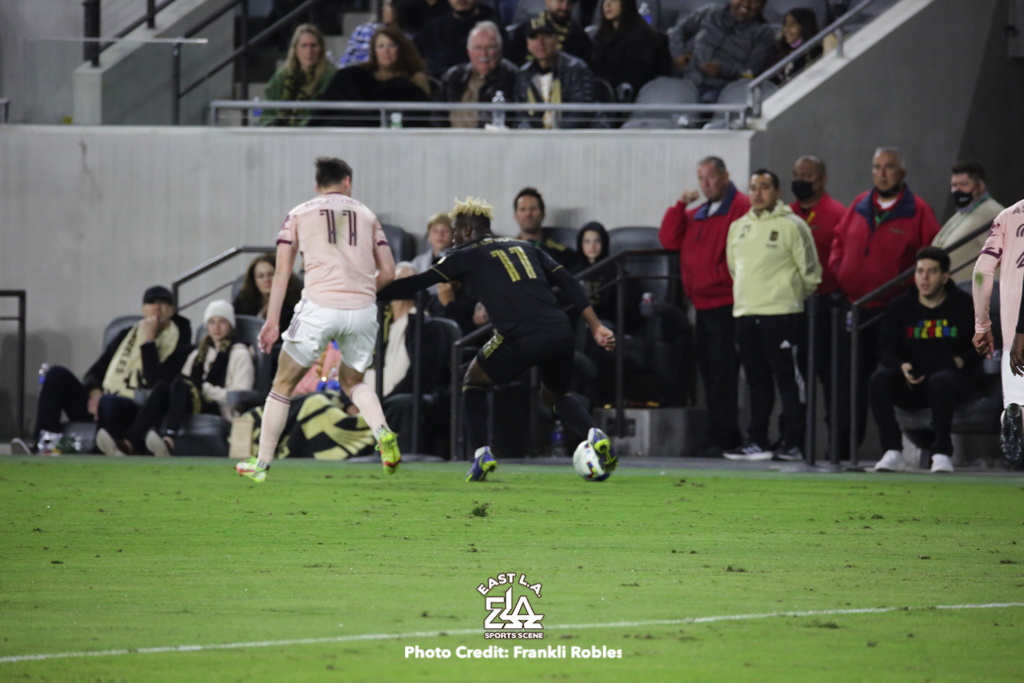 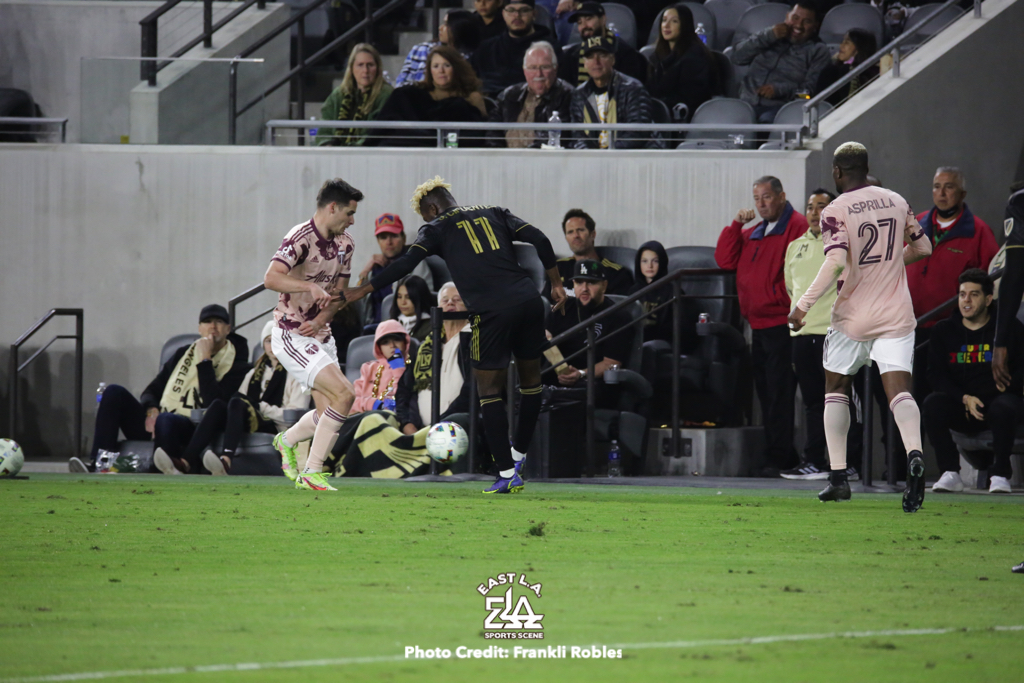 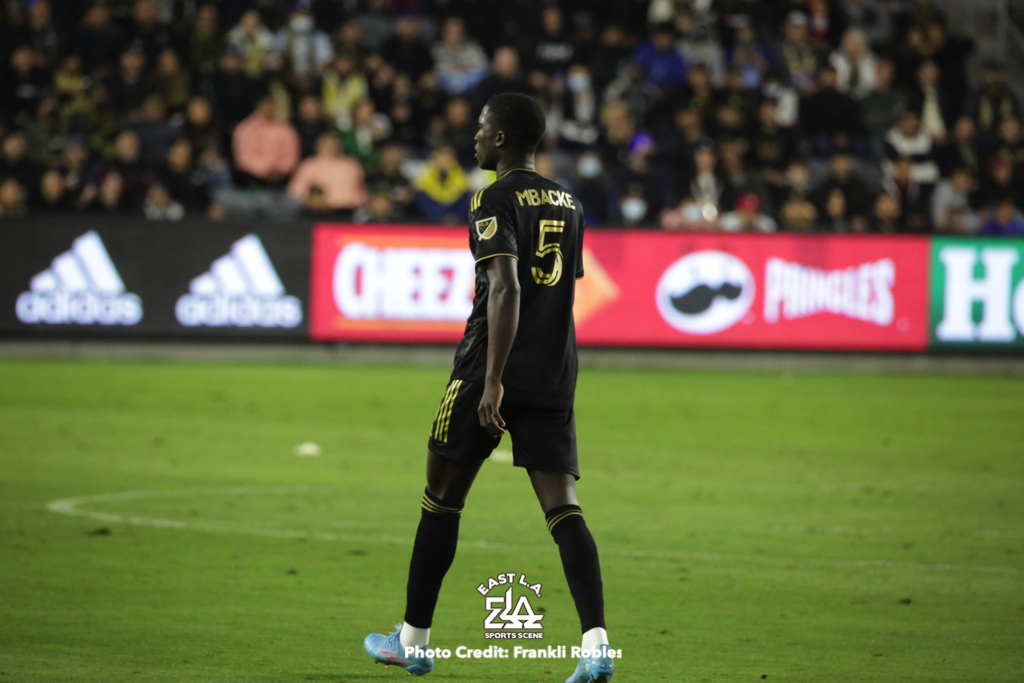 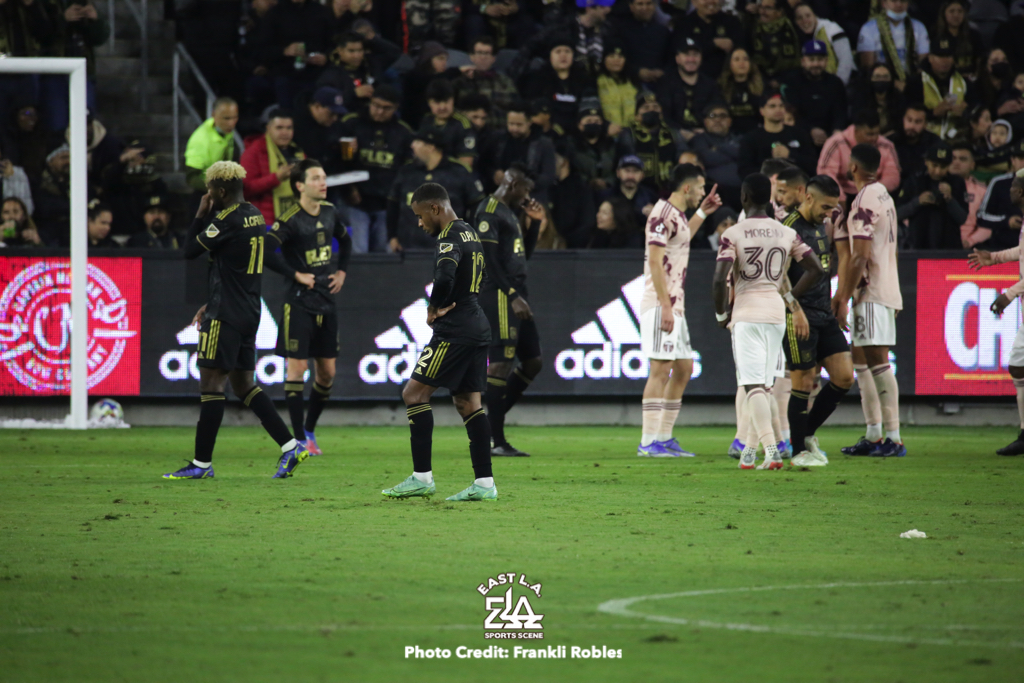 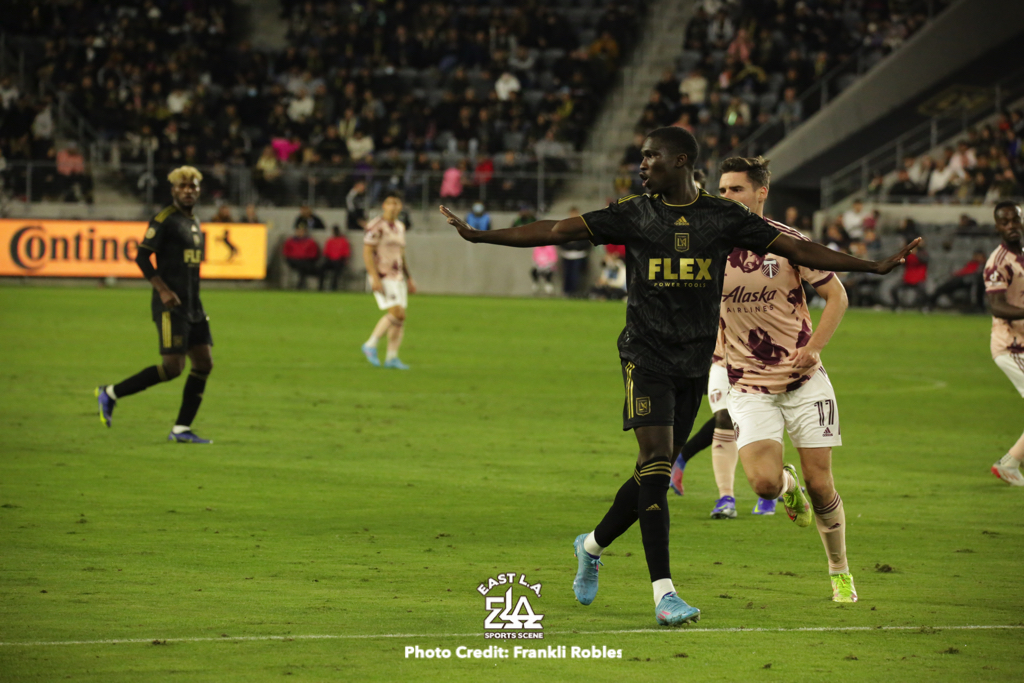 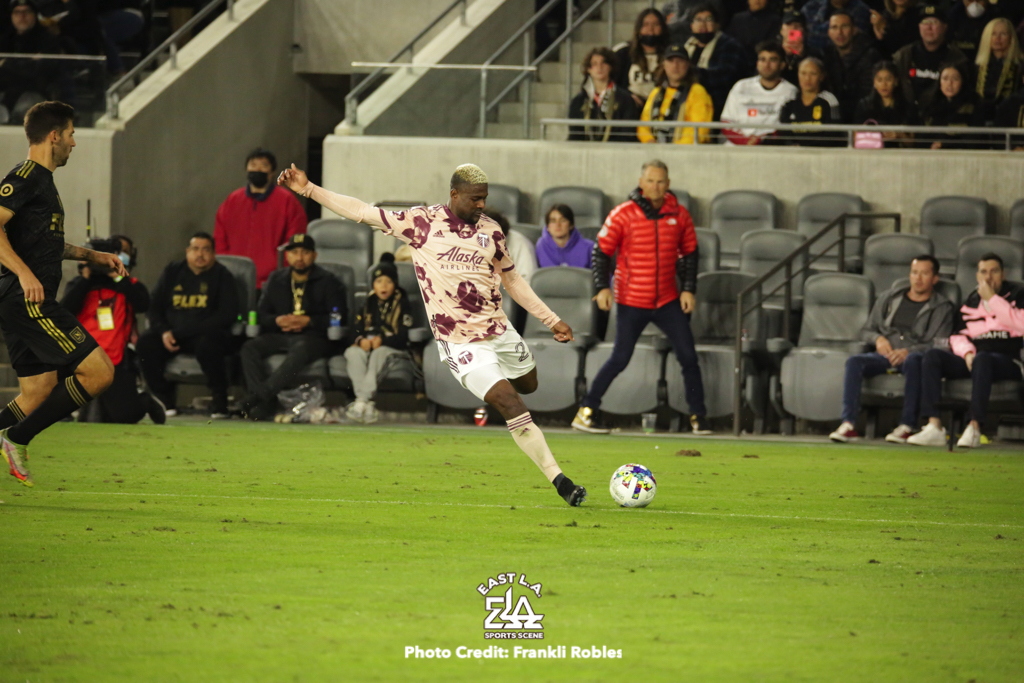 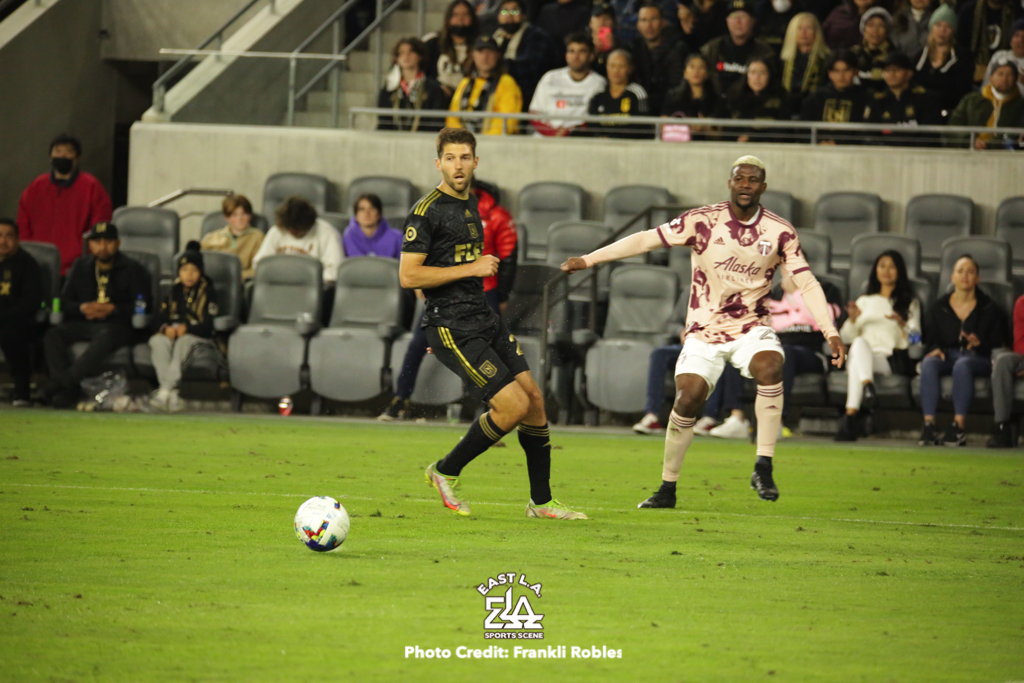 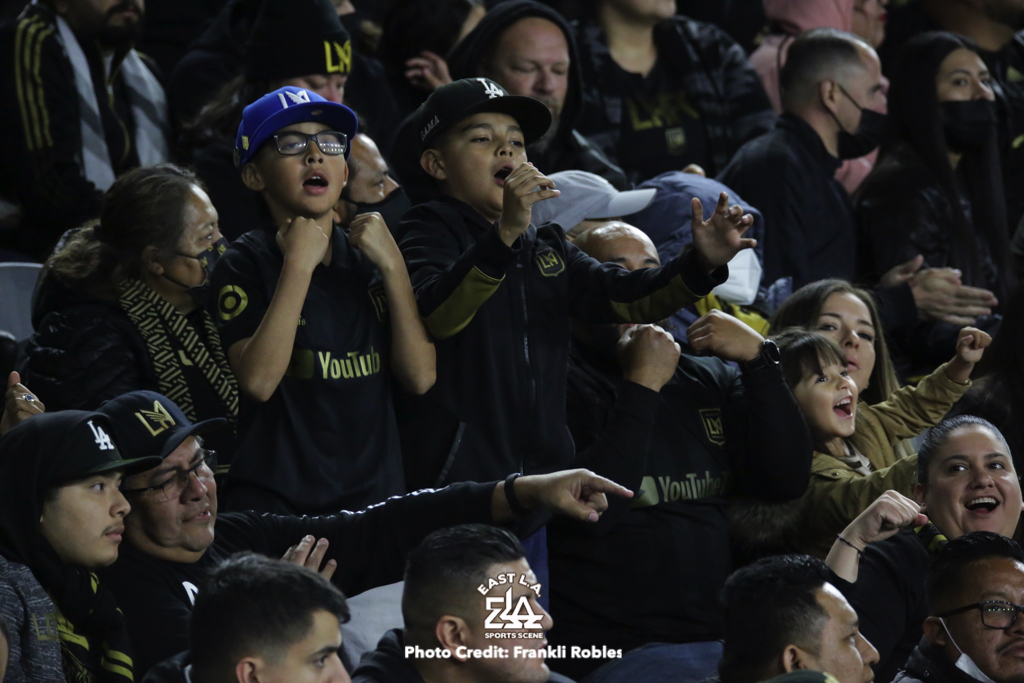 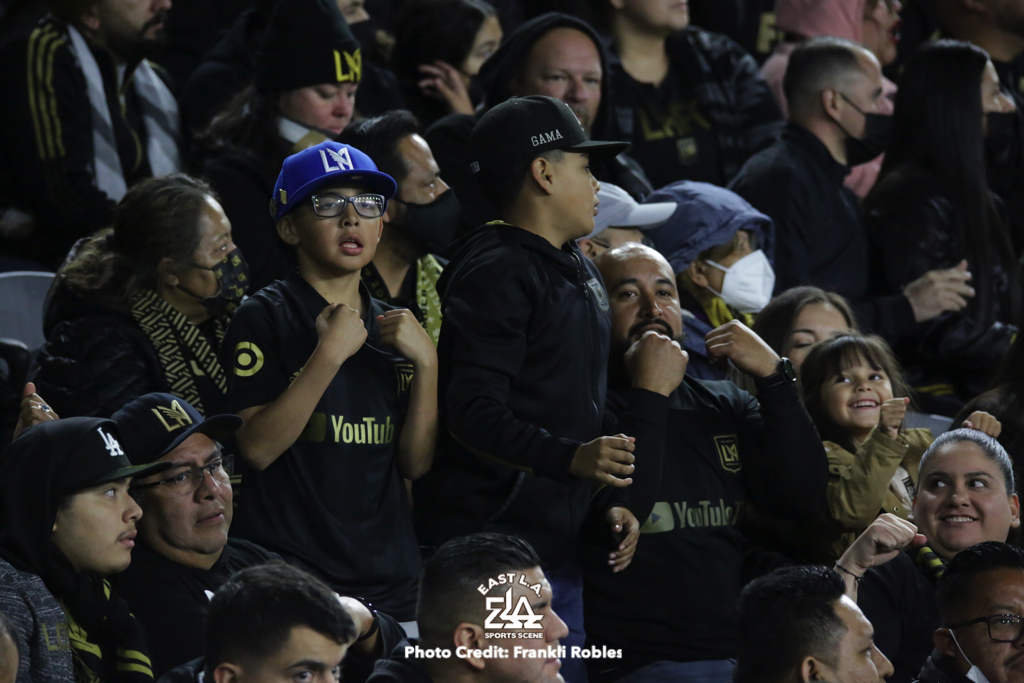 At the 28th minute, LAFC then mounted several offensive attacks on net, but were repelled by a sagging Timbers defense. At minute 32, the Black & Gold got close to a score on a throw-in, but the Timbers collapsed nicely in tight defense. The Black & Gold continued their attacks but could not penetrate the solid wall of Portland’s defensive alignments.

On a scoring attempt by “Chicho”, he was fouled by Claudio Bravo in the 36th minute. A Penalty Kick was awarded to Chicho from just above the 18′ box. The attempt was just too high and missed its mark. A yellow card was issued to Portland’s Dairon Asprilla at the 40th minute. The subsequent LAFC shot failed. Then on a near self-goal by Portland, the Black & Gold  were awarded another try but missed that scoring opportunity as well. Good, heavy, and serious action was shown both ways and was indicative of the match-play in the opening period.

{2nd Half} The apparent missing element compared to Week #1’s match was the aggressive and explosive play of El Capitán, Carlos Vela. But then, he was replaced at the 46th minute by Coach Cherundolo with #22 Forward, Kwadwo Okopu and never re-entered the match. While Vela was a starter for the match, he was obviously numbered and marked closely whenever the ball approached him and vice versa. For most of the match, nearly all of the Black & Gold’s shots on goal were true and on-line, but unfortunately, a bit too high.

The pace quickened as did the adrenaline for the Black & Gold. At the 62nd minute there was turbulence on the field and again at the 68th, when Referee Elfath, issued a pair of yellow cards against the Timbers. Then at the 72nd minute, yet another yellow card was tagged onto the Timbers Coach for a technical disagreement with the Referee. Still the match wore on with LAFC getting several more good tries but missed them. In that five minute span of time, players were seen laid out on the turf seeking comfort for their pain from their respective medical teams.

The score at the end of regulation time was (1-0) Timbers, but Referee Elfath, added (5:00) minutes of Stoppage Time. And then the magic happened just as the 90th minute + 3, was about to conclude. That’s when the Banc of California and Grupo 3252 exploded into thunderous applause for the match-tying goal, when #17 Brian Rodríguez pooch-kicked the ball from his left flank attacking position and found #5 Mamadou Fall (Mbacke), all alone in front of the net, who was simply waiting there to tap it in. And tapping it in is what he did. The match was now tied at (1-1) with only two minutes left in the match. There would be no more scoring and the match ended in a draw, with both teams earning one point for their records. 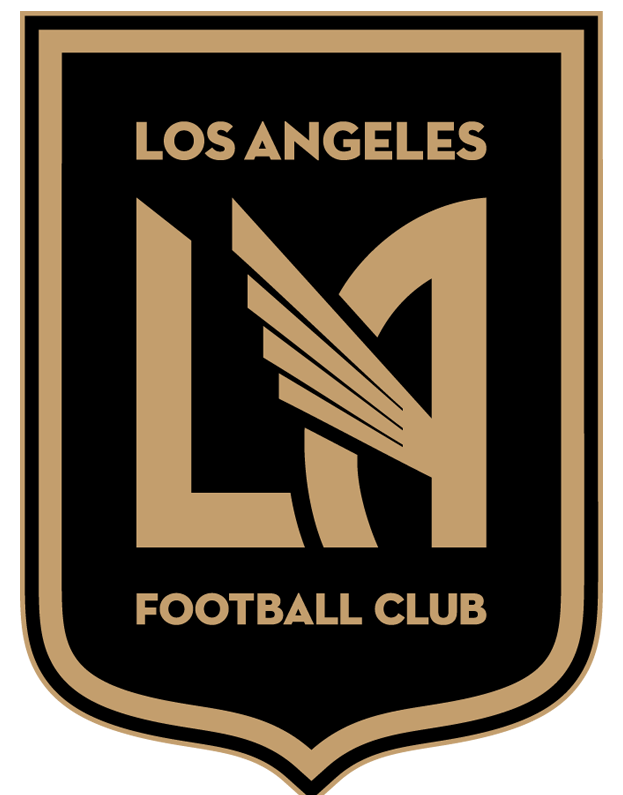