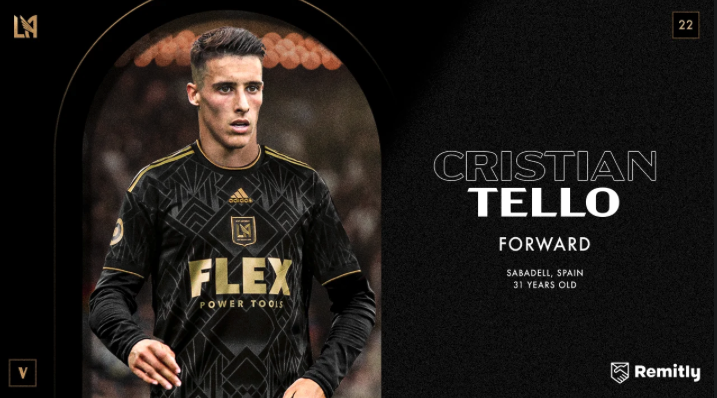 (East Los Angeles, CA) [From The Editor’s Desk]: The LAFC has been very active and busy as the transactions continue at a brisk pace all around the MLS. And in this last minute scramble, the Black & Gold have turned their eyes and attention on reinforcing their squad for the final push into the post-season playoff run by their signing of free agent, Cristian Tello. Also, do keep in mind the importance of winning of the prestigious Supporters’ Shield race in the all-out sprint to the finish line.

In this most recent press release issued by the Club, they are glad to announce the signing of Tello. His contract will be good through the end of this season, with Club retaining options for 2023 and 2024.

Please give a good read to the background of this new addition to the team.

Los Angeles Football Club (LAFC) announced today that the Club has signed free agent forward Cristian Tello to a contract through 2022, with Club options for 2023 and 2024. Tello will occupy an international roster slot upon the receipt of his P1 Visa and International Transfer Certificate (ITC).

“Cristian is a dangerous attacker and a great fit to what we are building at LAFC,” LAFC Co-President & General Manager John Thorrington said. “He has played for some of the biggest Clubs in the world and has succeeded in high-pressure situations like the Champions League. We are excited to welcome him, his wife and family to L.A. as we continue the work towards our ultimate goal of winning championships.”

In his career, Tello played in 21 UEFA Champions League matches with Barcelona and Porto, scoring six goals. He also played 17 times in the Europa League for Fiorentina and Real Betis.

A product of the famed La Masia Youth Academy, Tello spent his youth career with RSD Espanyol and Barcelona. Tello made his Barcelona debut in November, 2011 and his first appearance in La Liga on January, 28, 2012.

He was loaned to FC Porto of the Portuguese Primeira League in July, 2014 and scored seven goals and registered seven assists from 2014-2016. Tello was then loaned to Fiorentina in the Serie A, Italy’s top division.

Tello transferred to Real Betis in Spain’s La Liga in 2017, where he proceeded to thrive, appearing in a total of 140 matches, making 51 starts and scoring 22 goals.

An Olympian with the 2012 Spanish National Team, Tello also won the U-21 European Championship in with Spain in 2013.