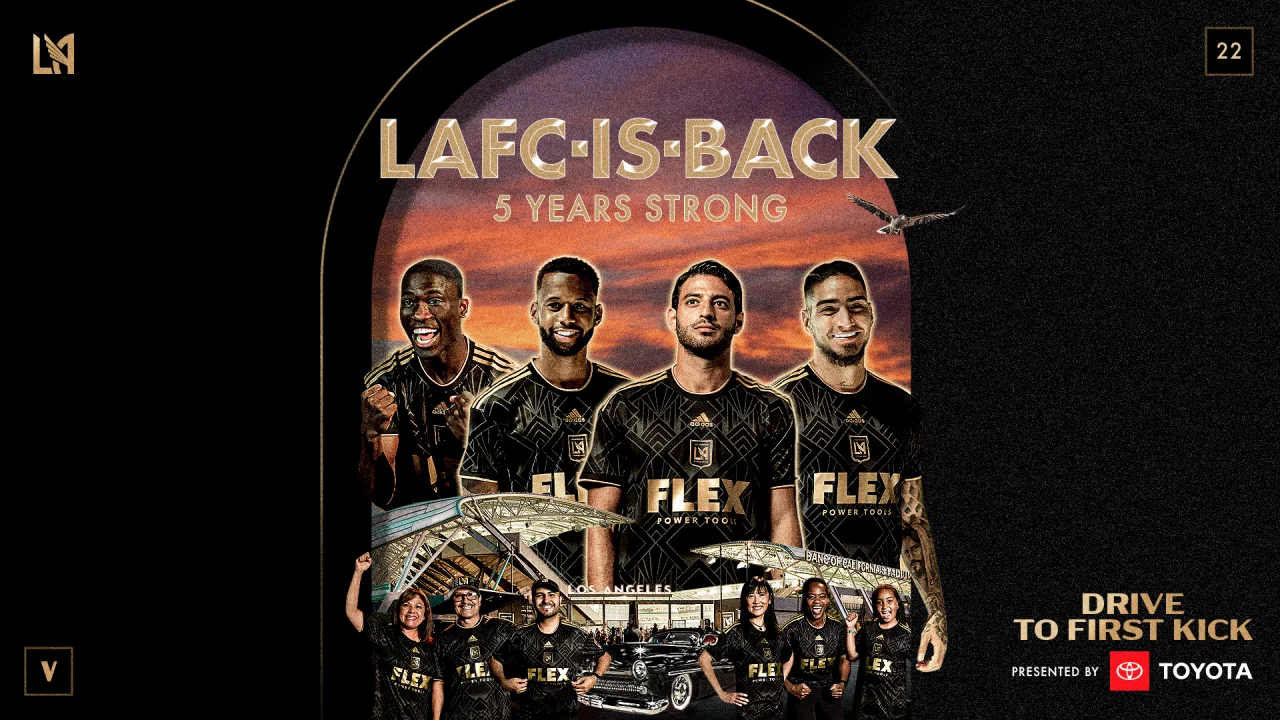 LAFC IS BACK FOR SEASON 5

LAFC Gears Up For The Start Of The Club’s Fifth Season With The Toyota Drive to First Kick, A Week-Long Celebration Leading Up To The Feb. 26 Season Opener

WHAT:  LAFC IS BACK for its fifth season in Major League Soccer and will kick of the festivities with the Toyota Drive to First Kick, a week full of community events, player appearances and interactions throughout Los Angeles leading up to the Club’s season opener on Saturday, Feb. 26 at 12:30 pm PT against the Colorado Rapids at Banc of California Stadium.

LAFC started the festivities on Friday, Feb. 18, when the Club unveiled the new ‘5 Years Strong’ black Club Kit for the 2022 season in a jersey launch event on Pepsi Plaza at Banc of California Stadium.

The LAFC Merch Truck and the Black & Gold Street Team will return to the street of Los Angeles on Monday, Feb. 21 and will make appearances throughout the week at some of LA’s most iconic locations like Randy’s Donuts in Inglewood, Hilltop Coffee + Kitchen in View Park and Pink’s Hot Dogs where LAFC Broadcaster Max Bretos will be serving up the Pink’s LAFC Dog to fans.

LAFC continues to be a force for good in Los Angeles, with community events planned throughout the week that include a school beautification project at Payne P-8 STEAM Academy in Inglewood on Monday, Feb 21, a community 5k run hosted by the Black & Gold Run Club on Tuesday, Feb. 22 and a virtual classroom visit by LAFC legend Jordan Harvey on Friday, Feb. 25.

Other highlights include the lighting of City Hall and the U.S. Bank Tower in Black & Gold to celebrate the start of LAFC’s historic fifth season in the Heart of L.A. on Friday, Feb. 25 and special social media content and contests to round out the week’s festivities.

The remaining slate of events and Merch Truck stops taking place throughout the week leading up to the Club’s first match of 2022 are listed below: