(East Los Angeles, CA) August 13, 2021 [From The Editor’s Desk]: Unfortunately our update for these last five matches, starting with the July 21st loss to the Portland Timbers, then in succession, ties with Vancouver Whitecaps, and Minnesota United FC Loons, followed by losses to Sporting Kansas City and the San José Earthquakes, does not bring the best of news to all LAFC-Black & Gold fans. It’s no doubt that the Club has hit what many are calling “the skids,” as they continue to free-fall and stall in the MLS-Western Conference standings. Currently they are in 7th place with a [6-7-5] {W-L-T} record good for 23 points.

However, there’s no need to doubt the character and the competitive drive of the team, as there is still time to make a resounding recovery to climb back up in the standings prior to the playoffs. And, although there are many reasons, excuses, explanations, etc. for their past several performances, we are predicting that all is not lost. It’ll be a matter of the Head Coach Bob Bradley turning things around 180 degrees for them perhaps based on the Club’s newest acquisitions and/or reinforcements, in the persons of these two players, Sebastian Ibeagha, formerly an NYCFC defensive standout, and Cristian “Chicho” Arango, a native of Colombia. Arango, a striker, was acquired from the Millonarios Fútbol Club of Colombia’s top league, Categoría Primera A. He will occupy an international spot on the Black & Gold roster. 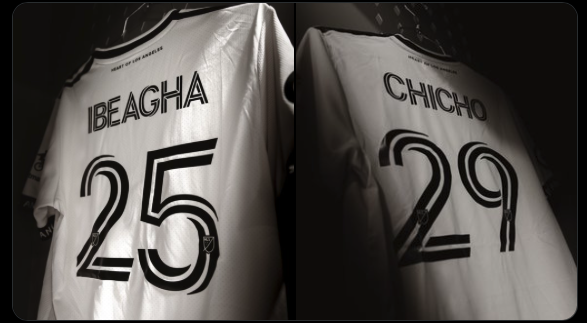 We thank you all for your patience as we make our best efforts to become current with our coverage of LAFC.