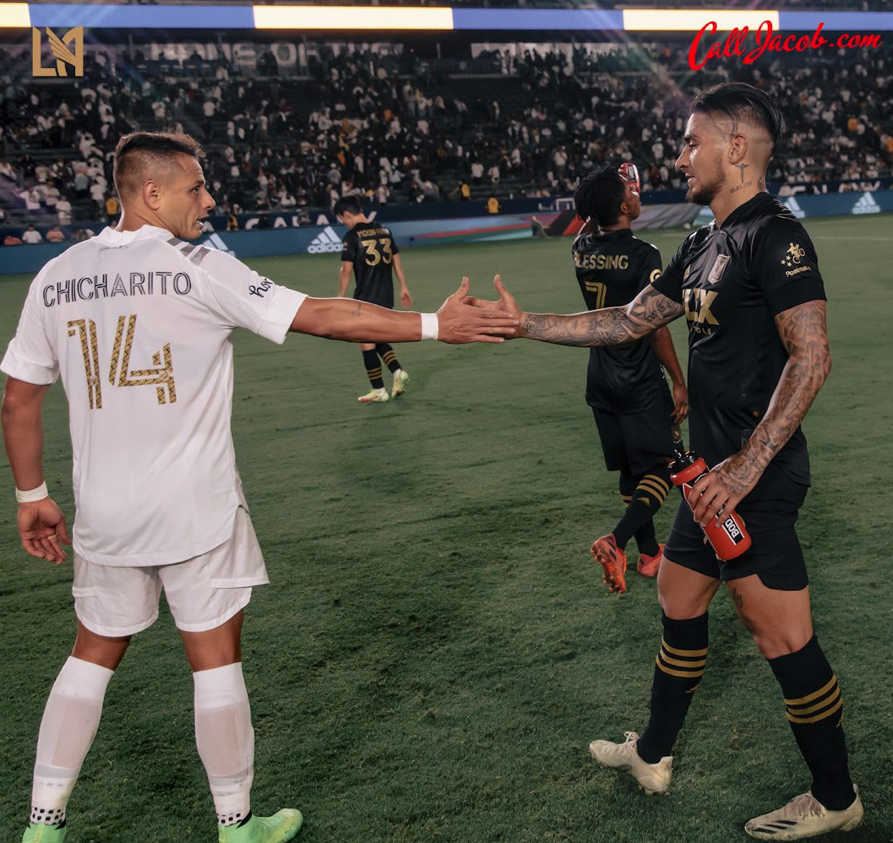 (East Los Angeles, CA) October 9, 2021 [From The Editor’s Desk]: The “El Tráfico” aka, L.A. Galaxy vs. LAFC final rivalry match of the regular MLS season, turned out to be an entertaining affair, but one that would end up in a tie, allowing both teams to add (1) point to their team’s total season amount. Their match was played at the Carson, CA, Dignity Health Sports Park, (DHSP) home of the Galaxy.

(Match Summary): Each team entered the DHSP pitch with an enthusiastic, emphatic, and boisterous crowd welcoming. The vast majority, of course, being the L.A. Galaxy fans from its well-known Victoria Block. LAFC entered to the chants and roars of its 650+ assorted fans representing their team as well as Grupo 3252. This very young rivalry has shown short memories when it comes to its “match-day” behaviors. On the last encounter at Banc of California Stadiumin late August, Galaxy fans were not very courteous and respectful, as most who attended that day, would say. At the conclusion and exiting of this match there was a physical encounter between some members of the two groups that the DHSP security teams along with law enforcement entities had to break-up. And, thus the rivalry continues, in more ways than one. Let’s hope that the leaders of both fan groups can sit down soon in a friendly manner and call for a peace treaty and let the LAFC and Galaxy players represent their fans and their communities to the best of their abilities, win, lose or draw!

(Please Note): Here is the joint statement from the L.A. Football Club (LAFC) and the L.A. Galaxy Management re: the August 28th incident Banc of California and the incident that took  place on October 3rd at Dignity Health & Sports Park.

(Match Summary): But, let’s begin our reporting of the action that took place on the pitch. First to strike g-o-o-o-a-l was LAFC’s Momadou Fall who put in another tremendous “header” at just the 11th minute of the match, after locking in on the sphere from an Eduard Atuesta corner kick. Once it was picked up on his radar screen, with his extremely sharp and accurate timing, he then quite athletically propelled it directly into the net, past the helpless Galaxy goalie, Jonathan Bond, giving LAFC the lead, (1-0).

But, shortly thereafter, as has become the “Achilles heel” for the Black & Gold, after they score, it follows that the they relax on defense, and thus, at the 19th minute, the Galaxy answered back with their own attack on goalie, Jamal Blackman, who appeared to be out too high, and tied the match on a goal from Samuel Grandsir. Score was now tied at (1-1).

The rest of the match did not feature much excitement and the players seemed to have settled into a very cautious rhythm of competition.

(Next Up): LAFC returns to action on Saturday, Oct. 16th when they host the San José Earthquakes at 12:30 p.m. PT at Banc of California Stadium. The game will be broadcast on Univision, TUDN, Twitter, 710 AM ESPN and 980 AM.