Ducks Manage Another Split With Rivals. Season Ends In Disappointment For Both Teams. 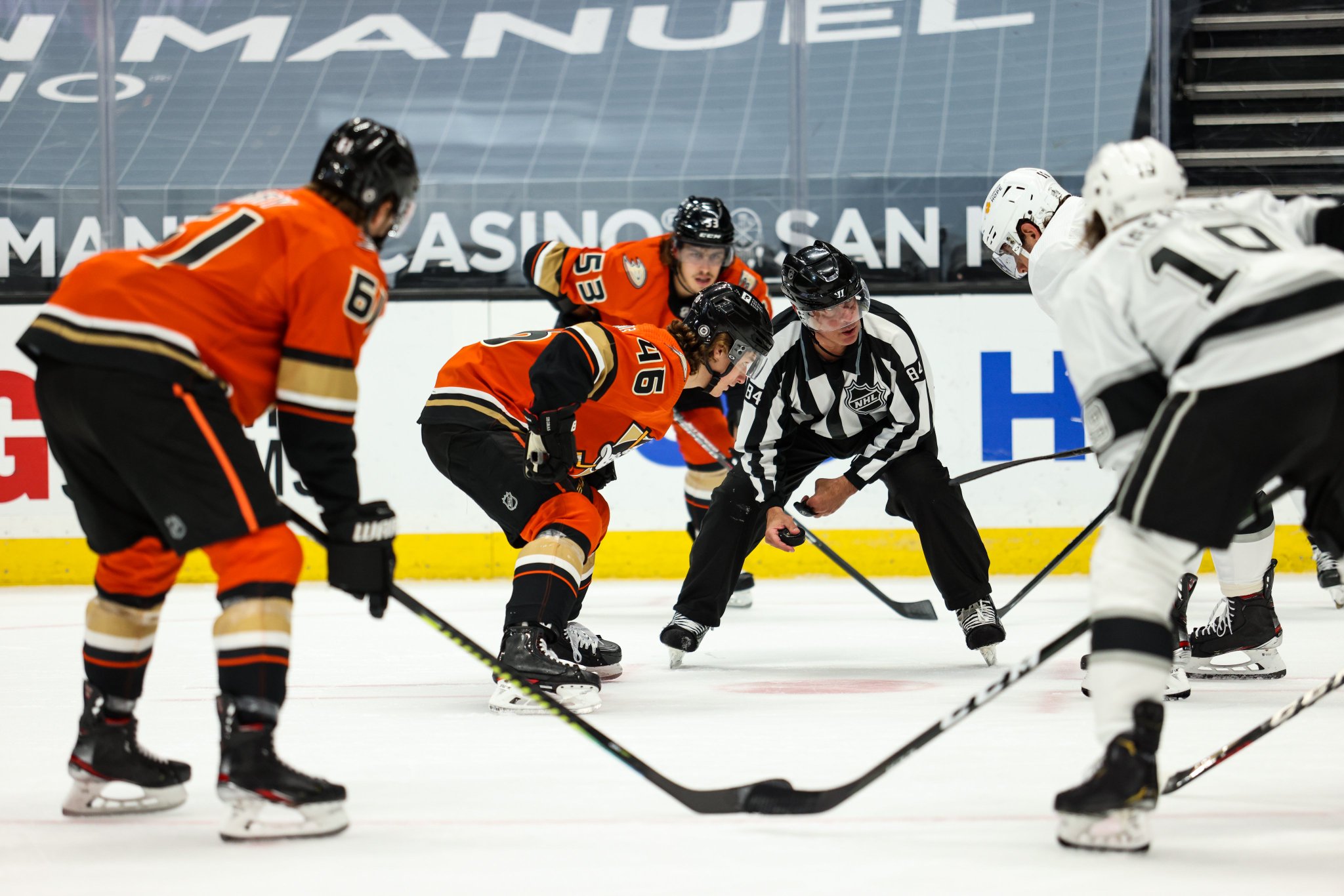 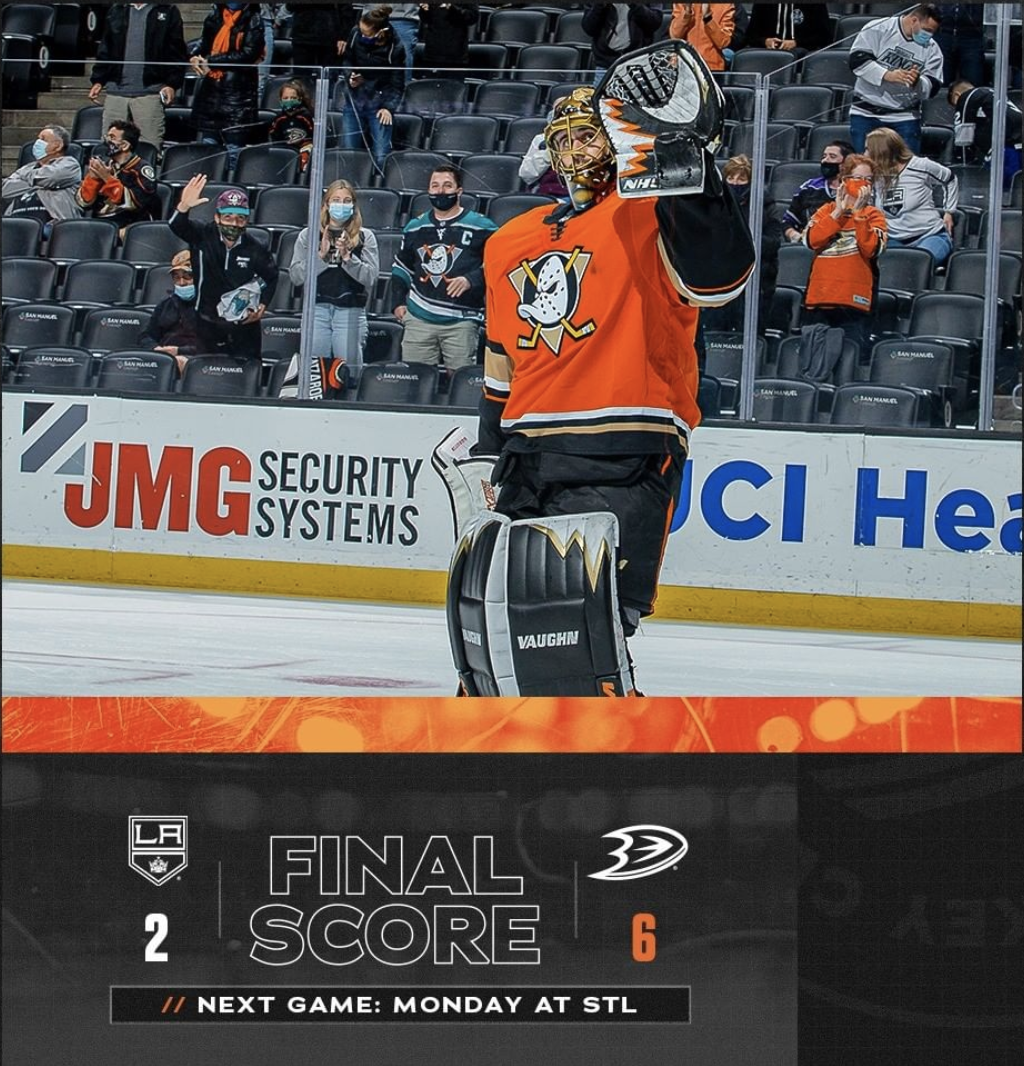 (East Los Angeles, CA) May 14, 2021 [From The Editor’s Desk]: In our effort to bring you ongoing coverage of our two Southern California-based NHL Hockey teams, the Kings and the Ducks, we took the time to highlight the season’s rivalry between these two teams. While we know that many of our followers are very good and loyal fans of both teams, we hope that you appreciate our coverage as provided by our veteran, and seasoned correspondent, Joe Perry. In due time, we hope to be credentialed to cover these contests under our media credentialed fashion. Now, on to the stories of Part 2, Games 3 and 4. 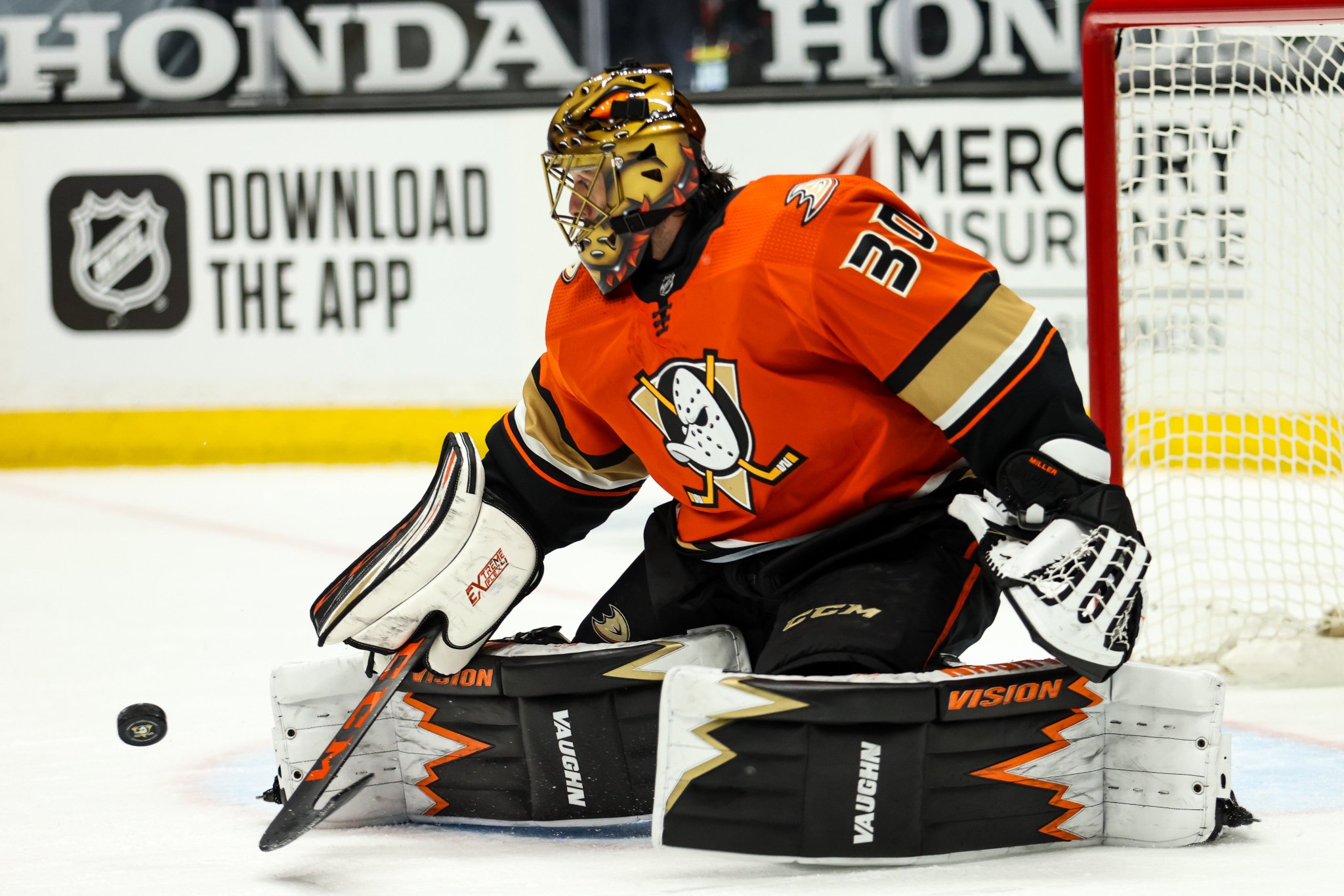 (GAME 3): (1st Period): Realizing the Kings only have a slim window to make it into the playoffs, they start to integrate younger players into the lineup, most notably Quinton Byfield, who’s an up-an-coming 18-year-old of Jamaican descent.

[DUCKS 1st GOAL/1-0]. Ducks win the faceoff, puck slides backwards to the point for a slapshot one-timer and it goes off the post and in. A bomb off the stick of the defenseman Haydn Fleury. Second shot of the night from the Ducks. Anaheim center Trevor Zegras won the draw and became part of the traffic in front that helped tremendously, but Jonathan Quick’s own defenseman Tobias Björnfot was standing right in front of him, the real reason he couldn’t see the puck.

(2nd Period): Scoreless but plenty of opportunities. Most notably, Ducks had three power-play chances. (3rd Period): [KINGS 1st GOAL/1-1] – The most beautiful team goal all season. At even-strength, Los Angeles defenseman Olli Määtä toes the blue line and passes the puck across to fellow defenseman Sean Walker. The pass is so fast that Walker fields it backhanded and gets pinned against the boards for a moment, at which point Ducks’ winger Rakell converges on him. Walker wriggles out toward the blue line. Now Ducks’ forward Isac Lundeström jumps out with his stick extended, trying to push Walker out of the zone, but Walker spins again 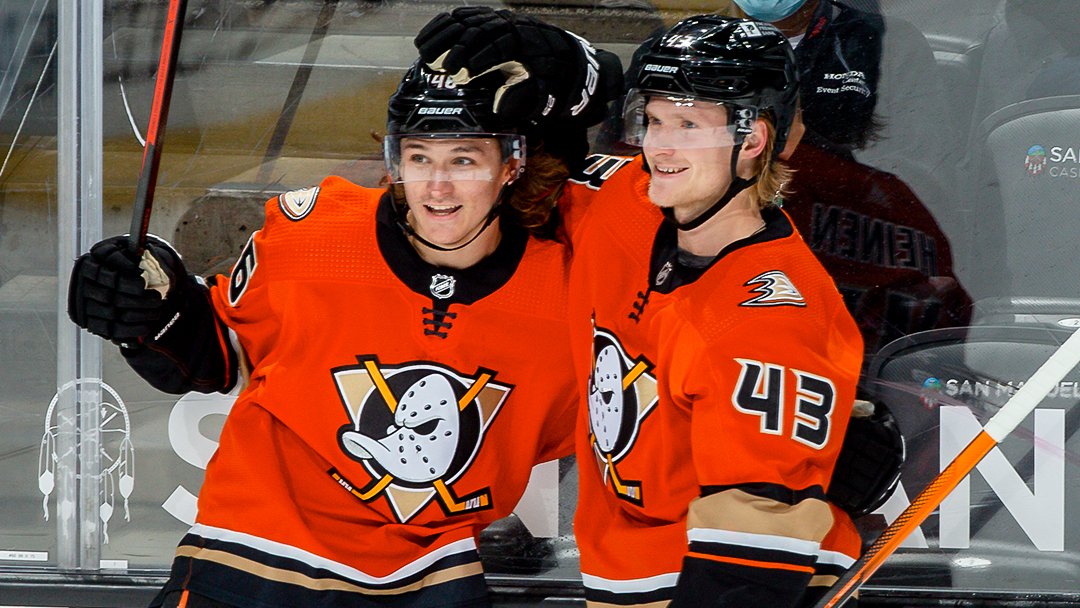 and rattles a whiz-kid pass off the boards and down to his teammate Trevor Moore who was actually calling for the puck because he just slipped his man (Lundeström). Moore receives backward while skating down toward net, his view on the middle slot. He taps a pass through the legs of Anaheim defenseman Simon Benoît to Gabe Vilardi who’s now got a chance to shoot, but instead, he trick passes behind the back and between his own legs, duping Ducks’ goaltender John Gibson who’s now on the wrong side of net. Kings’ forward Lias Andersson collects right in front and flings it into the open goal! The Ducks all hung their heads while the Kings rejoice. A big-time play, especially from Vilardi who had been quiet all night, but really made the right decision with that last cheeky pass.

[KINGS 2nd GOAL / 1-2] – Riding that wave, the Kings score with less than a minute to go in regulation, and they win the game. Anže Kopitar throws it on net but it’s batted away, all the way to the blue line where defenseman Mikey Anderson keeps it in with a poke. Dustin Brown now has it in the middle, but with his back to net. He

spins around and finds Kopitar streaking on a nice run, wanting more. Kopitar with a split-second opportunity, just him and the goaltender in a showdown. Gibson slides out a bit too eagerly to cut the angle and Kopitar dekes him from forehand to backhand, scoring right before being tripped and sent flying into the net himself. Kopitar was slow to get up, but his efforts left the Kings victorious.             [FINAL SCORE]: Kings 2  Ducks  1

(GAME 4): Kings’ playoff hopes dashed after devastating loss to the Ducks. (1st Period) – [DUCKS 1st GOAL/1-0] – Anaheim defenseman Jacob Larsson shoots through traffic, rebound right there for Max Comtois. Kings’ netminder Cal Petersen made the save but lost his stick and falls on his back, meanwhile Comtois dives and shovels the puck around the net for Trevor Zegras who beat his defender Iafallo and put it home for the score. What an effort from Comtois on the diving pass.

(2nd Period): [DUCKS 2nd GOAL/2-0] – Comtois finds Danton Heinen in front for a shot but it’s saved and bounces off the post right back to him. Heinen collects and sweeps it out to the point. Larsson then slides it across the blue line, only to have it slid back to him again on the left, creating movement and opening things up, at which point Heinen appears in the slot again, back-skating, waiting for a nice seam pass that eventually comes his way and he one-time wrists it straight into net for a score! Great pass by Larsson, flat with plenty of zip. 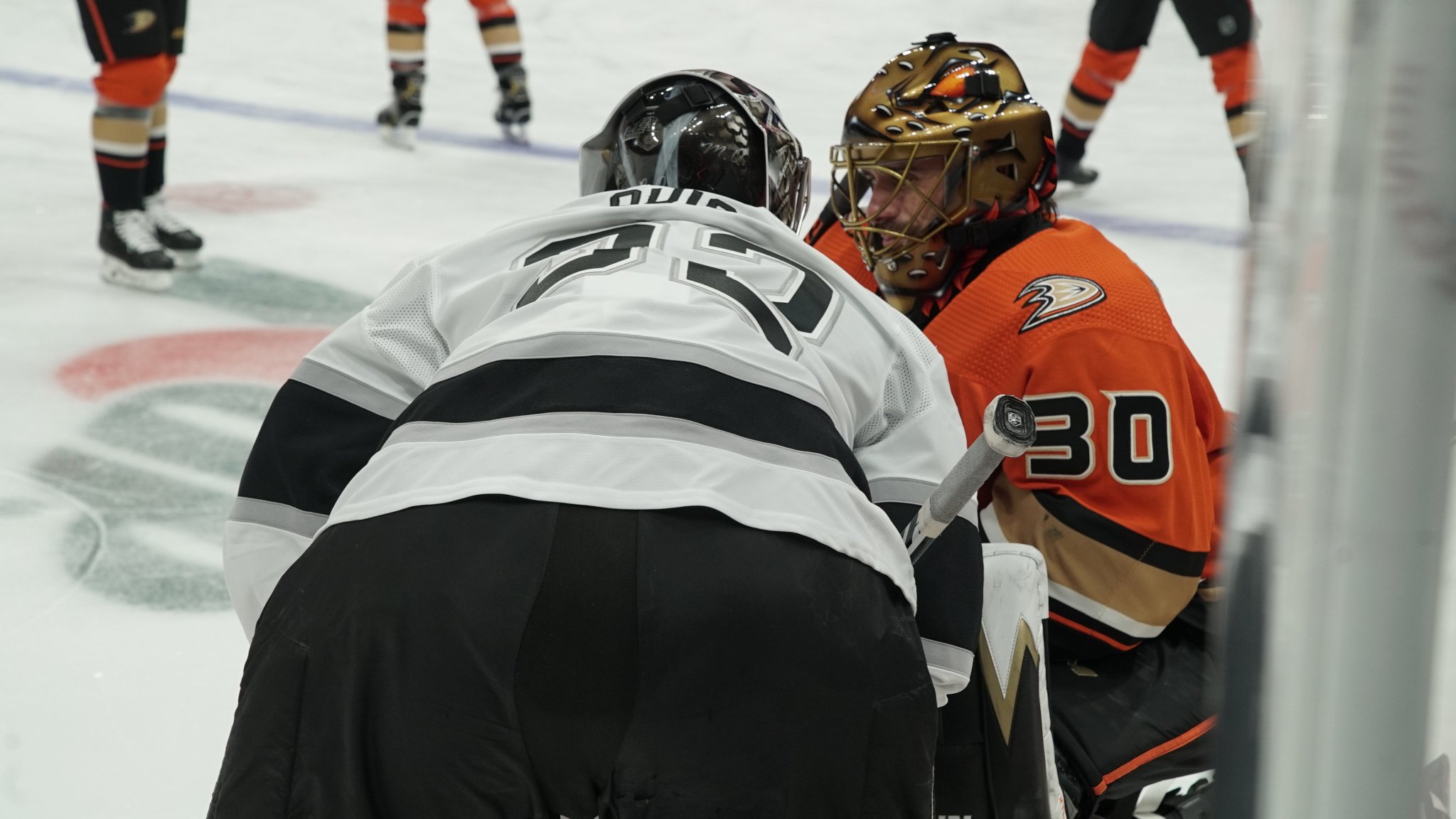 [DUCKS 3rd GOAL/3-0] – Kopitar fumbles the puck as he exits the zone and creates a Ducks 3-on-2. Heinen pounces on it as the two Kings nearby converge on him. He chucks it left for Derek Grant, Anaheim center, who chops it back to center for offenseman Nicolas Deslauriers. What a finish, short-side ripper off a tic-tac-toe, Deslauriers looked like a real goal scorer down on one knee.

(3rd Period): [DUCKS 4th GOAL/4-0] – Changes from both benches lead to a “2-on-2” as Ducks fly into the zone. Heinen’s got it, flanked by forward Max Jones who now slips behind him. Heinen drops it off for Jones and leads his man away for a shot opportunity. Jones takes aim and fires. Puck bounced off Petersen’s chest and Jones followed his shot for the rebound and a score. Petersen couldn’t get his glove on the puck and it bounced unfortunately to the short side where there was some room to squeeze it through.

[KINGS 1st GOAL/4-1] – Kings’ first goal was a weird mishap. It started with a face-off in the Ducks’ zone. Puck goes back behind net where Larsson smacked it up and around the boards for a clearance. Everyone thinks it’s gonna rattle out of the zone, but Walker stopped the puck against the glass with his body and immediately throws it on net. The wild shot is accidentally re-directed off the hip of Los Angeles forward Brendan Lemieux and into goal. 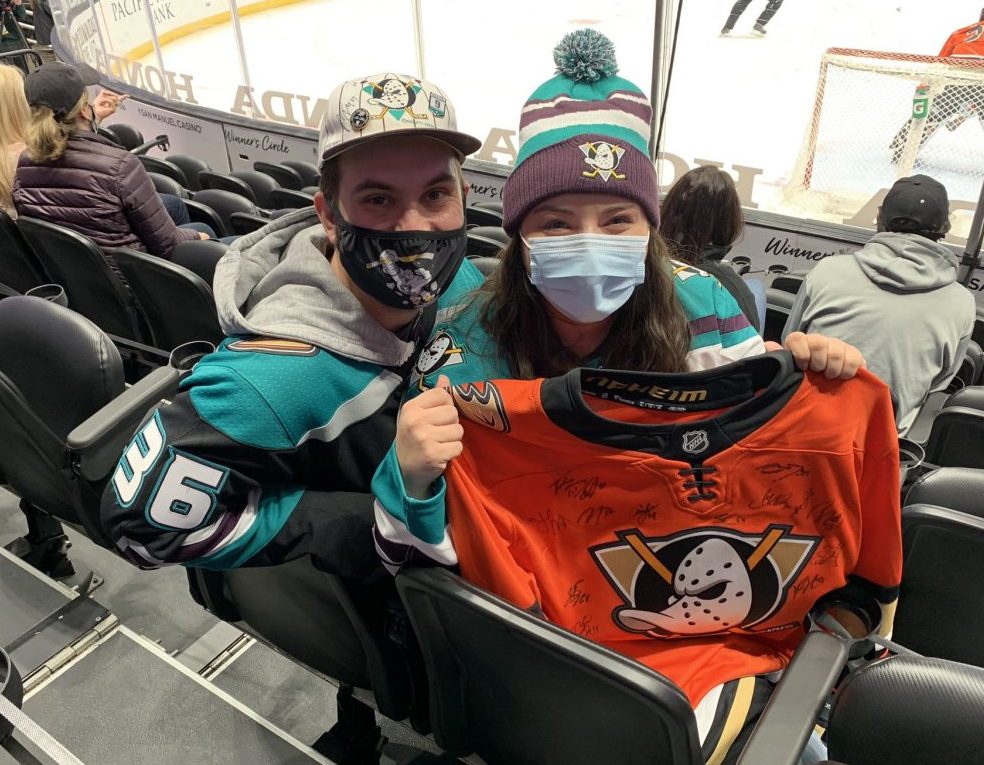 [DUCKS 5th GOAL/5-1] – A messy face-off win in the Kings zone goes to the Ducks. Puck squeaked back to the left point, immediately swung to the right point for Larsson who winds up big and cracked the puck home for a searing goal. Nice screen by Anaheim’s Sam Carrick was able to take away the eyes of the goaltender, and what a night for Larsson – a very good play and a bit of a breakthrough game for him. [DUCKS 6th GOAL/6-1] – Trevor Zegras stepped up with room on the left-side. He’s coming in, waiting for his mates to join, cuts through the top middle, fancifully, patiently, then saucers a pass to forward Troy Terry who heads down right, doubles back, seemingly stuck, but a quick backhand to a speedy Zegras attracted two Kings and pulled them behind net, effectively opening up Comtois, literally in front of the goaltender all alone. Zegras dishes and Comtois elevated the puck for the score. Great feed by Zegras, and Comtois gets a goal he deserves – he’s been great the past few nights. 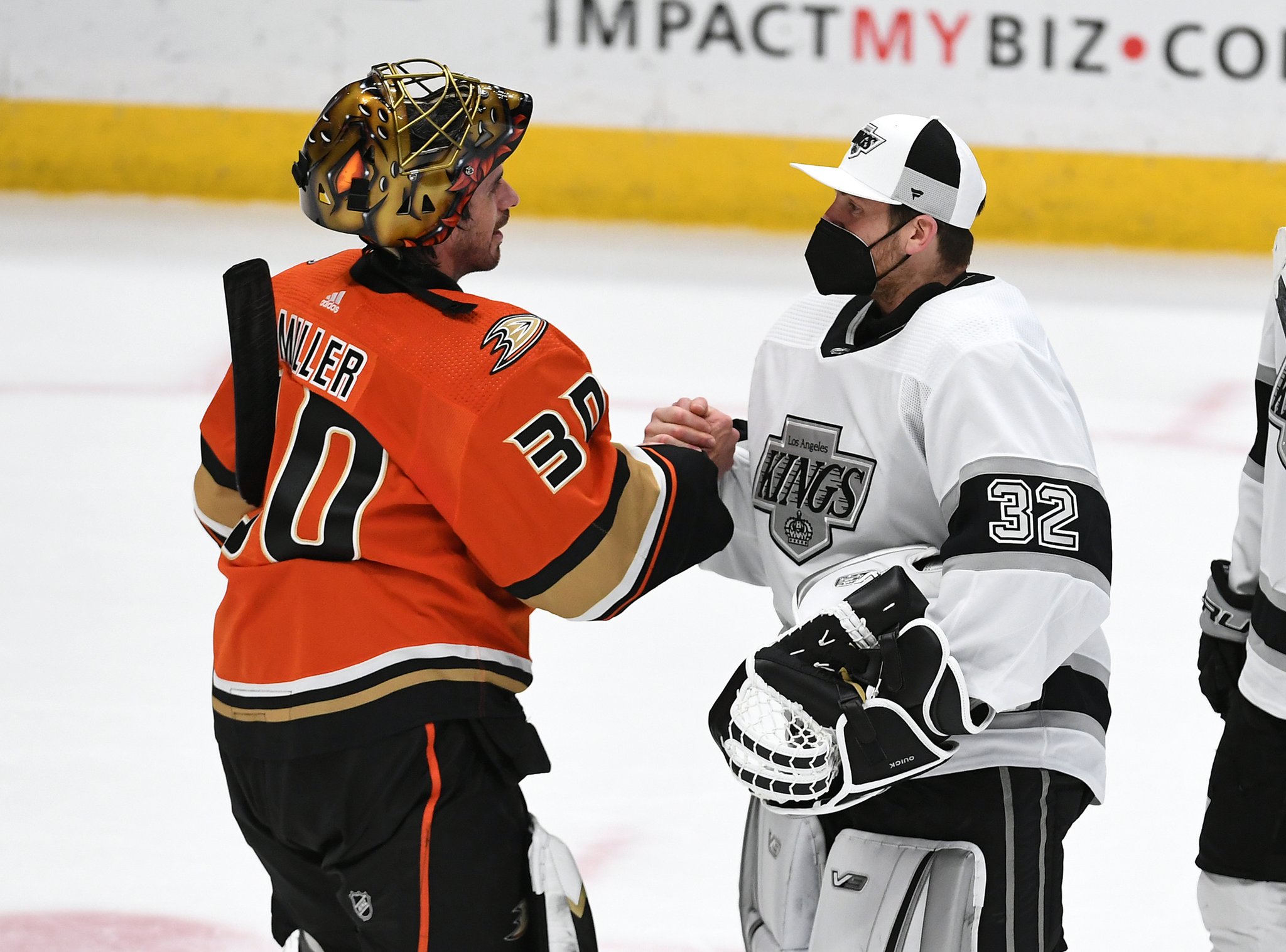 [KINGS 2nd GOAL/6-2] – Kings’ Andreas Athanasiou received a pass down on left-side boards and was pinned by two Ducks. Athanasiou muscled them off, just enough to slip the puck out to winger Adrian Kempe who now has options. He looked at the net, two other Duck defenders were there, but a perfectly timed Quinton Byfield swept in backward and split them, ready for a shot. Kempe instead looks to the higher slot as he wheeled out of the corner, passing up to Björnfot who slapped a one-timer home before Ryan Miller could get across and cover the net. Kempe sold it all by freezing Miller in net with a look to the rookie Byfield first. (FINAL SCORE): Ducks  6  Kings  2

(Of Significance): Both the L.A. Kings and Anaheim Ducks will unfortunately miss the playoffs again this year. The regular 2021 season for both of our teams ended on May 8th for the Ducks, and on May 13th, for the Kings. Let’s all hope for a full return to the “normal” NHL season later this year when it will be time to start everything all over again, but this time with the “sold-out” presence, and the roaring approval of all NHL fans who support their favorite teams.

About Our Correspondent: Joe Perry is our Sports Correspondent and Cinema-TV, and Entertainment Columnist for East L.A. Sports Scene. He was born in New Jersey and raised by two public school teachers who loved taking him on World tours. He is an MFA graduate from USC’s School of Cinematic Arts Program in Film & TV Production. Duly noted here, while growing-up, Joe was a huge fan of the New Jersey Devils. He has been assigned to cover the games between the Kings and the Ducks for the 2021 season.