Fireworks Expected In This Premiere Match-Up

(East Los Angeles, CA) July 14, 2022 [From The Desk of The Editor]: Day 2 of the Garcia vs. Fortuna “Fight Week” activities took a sharp turn from the gritty boxing gym practice environment to more of the formal Media presentation of the two opponents programmed in the Saturday night Mega-showdown at Crypto.com Arena between the 23 year-old native son of Victorville, CA., Ryan Garcia and his opponent, from La Romana, Dominican Republic, Javier Fortuna. The back-drop for the conference was our downtown, world-famous Biltmore Hotel.

And so it was, as the MC, Beto Duran took the microphone and officially announced the start of the Press Conference. After doing the standard delivery of informing the multitude of local, national, and international sports media outlets present of how the “flow of show” would go, it was “all” eyes on whoever he would call upon first. 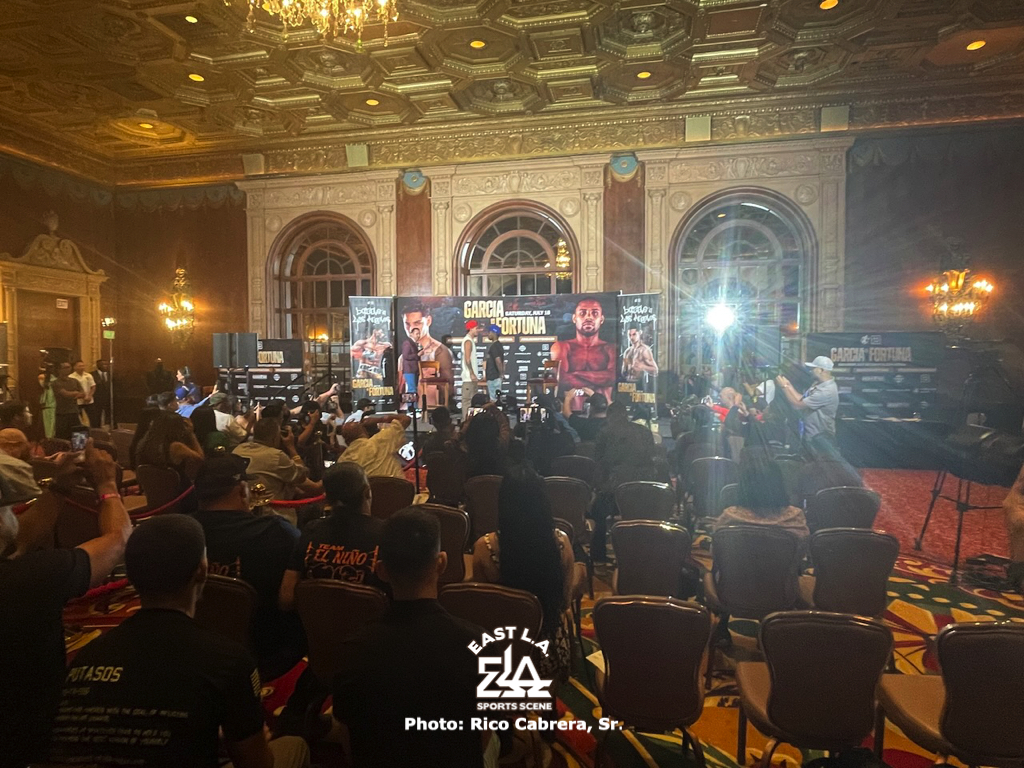 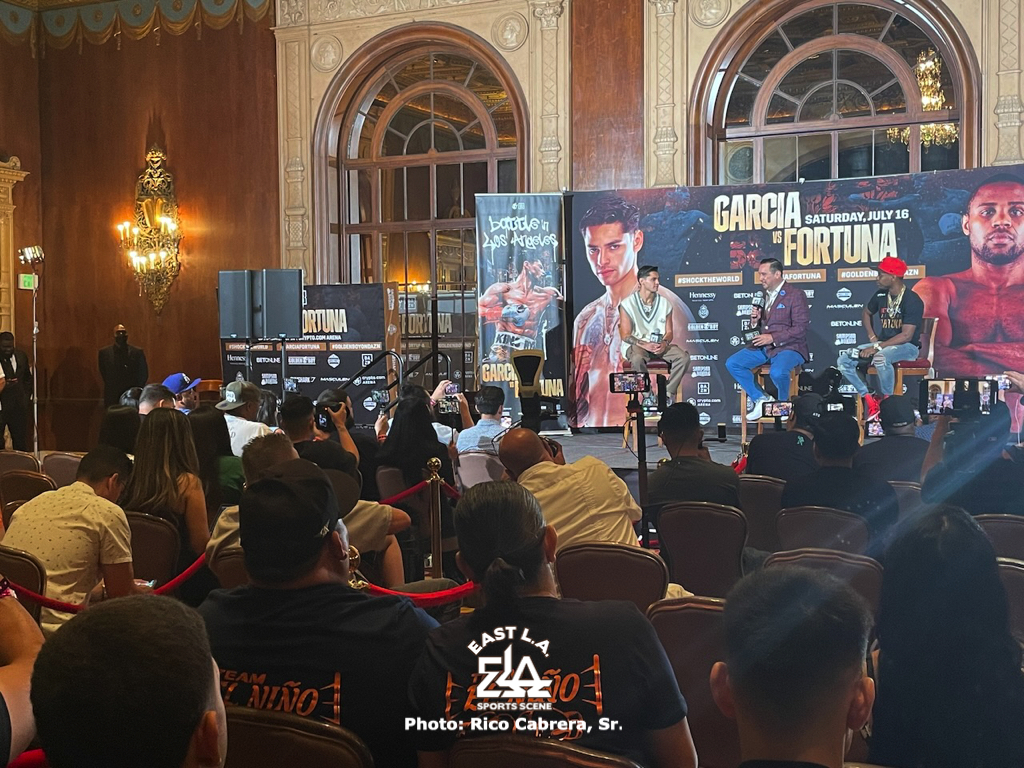 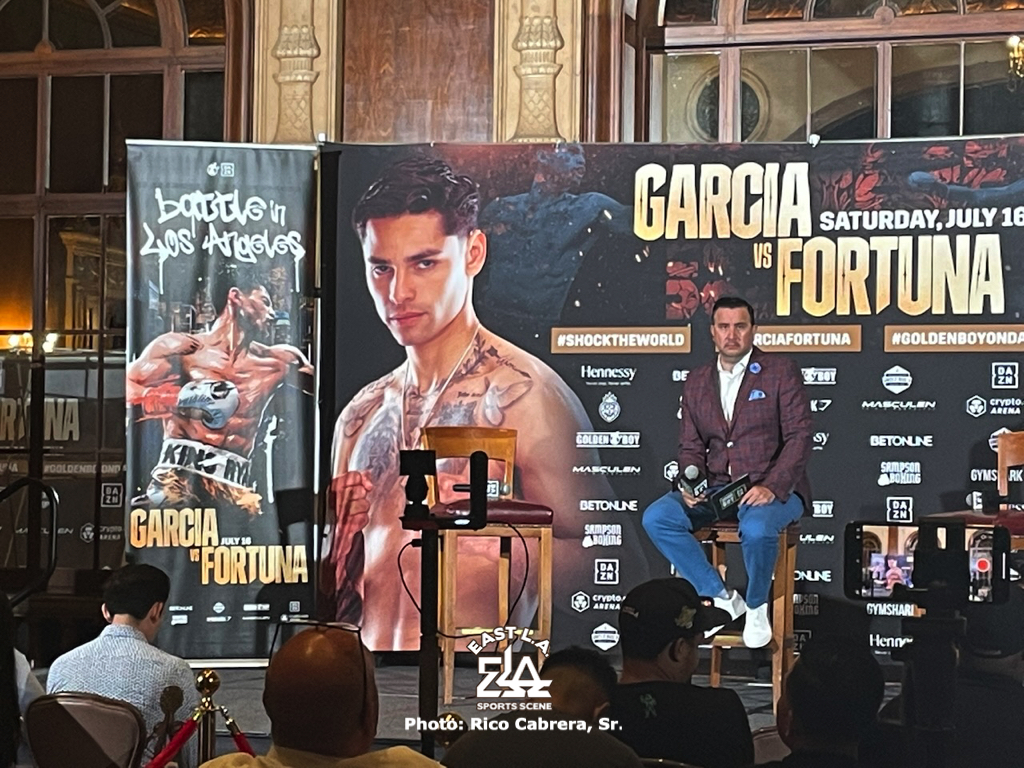 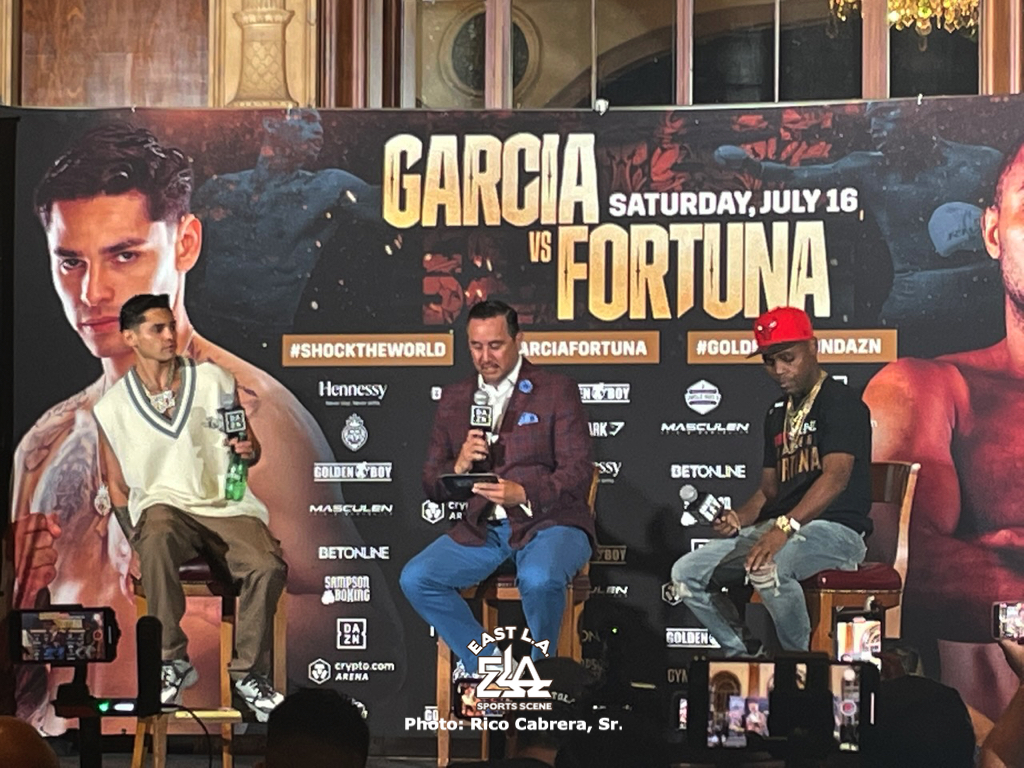 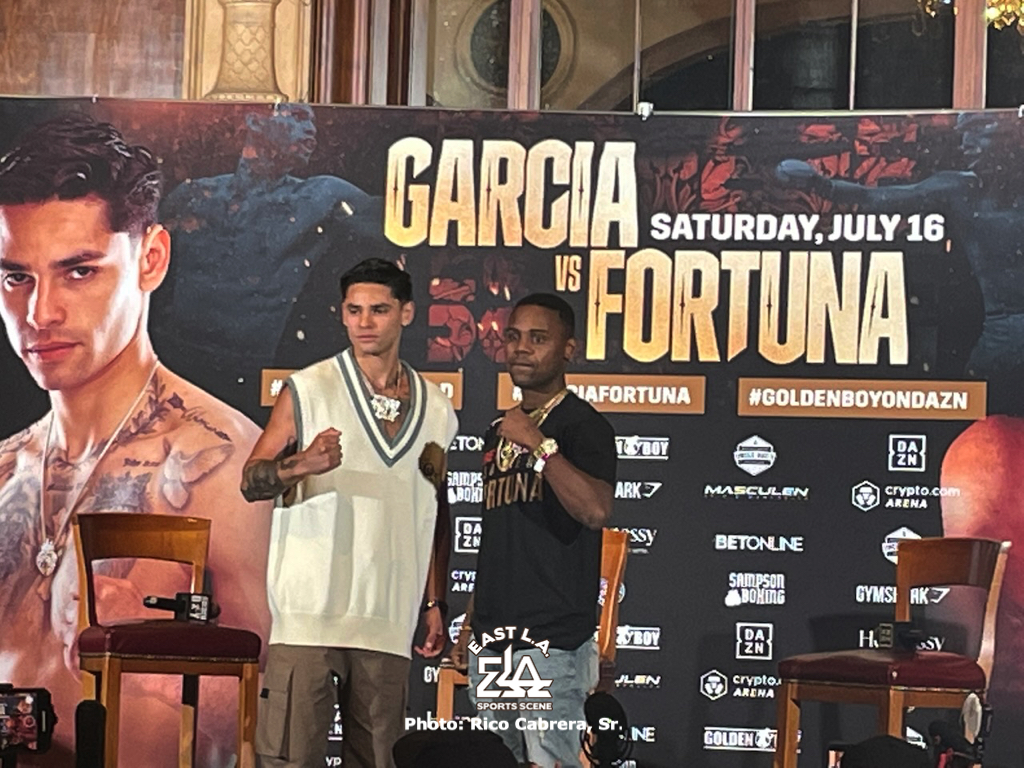 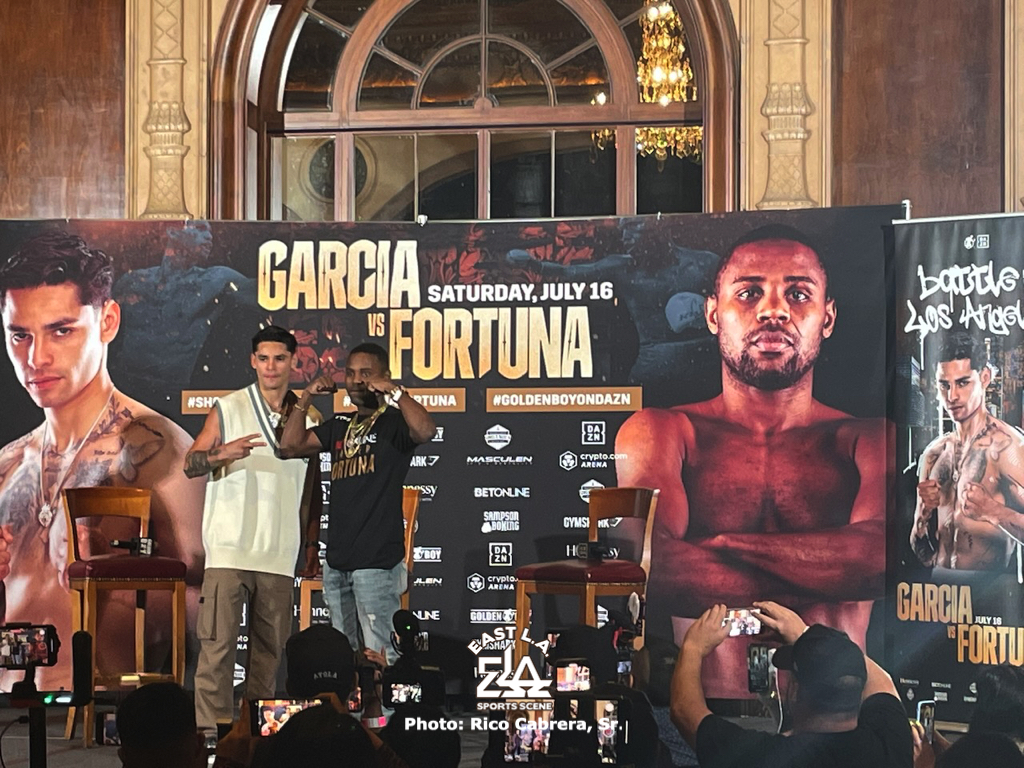 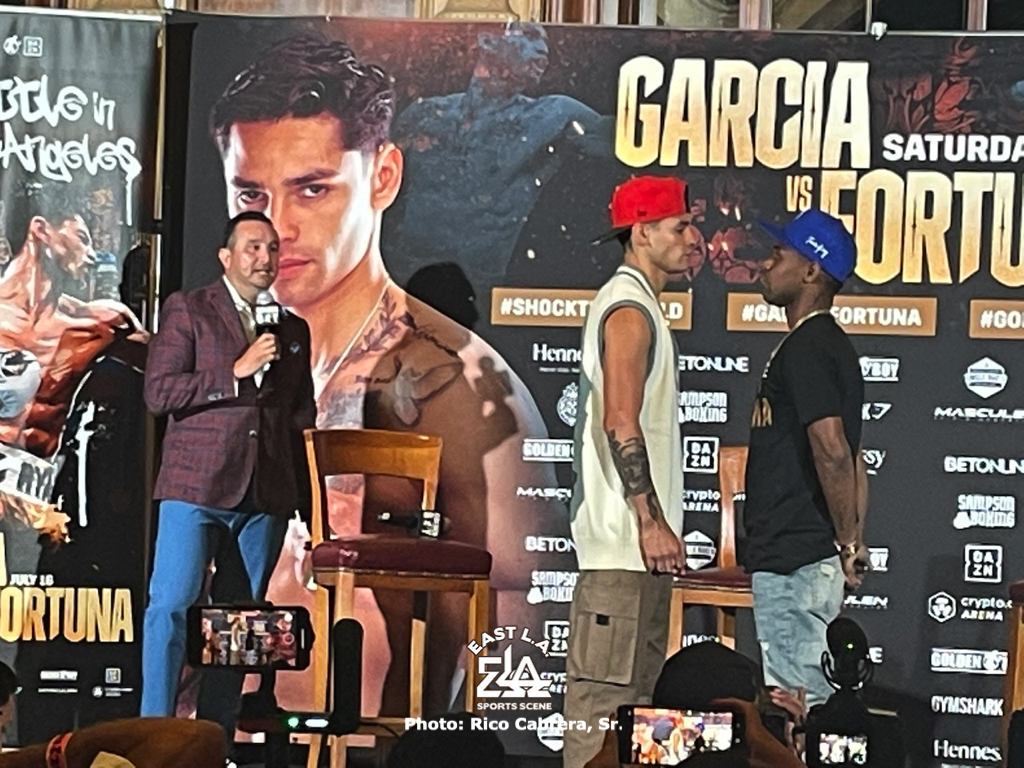 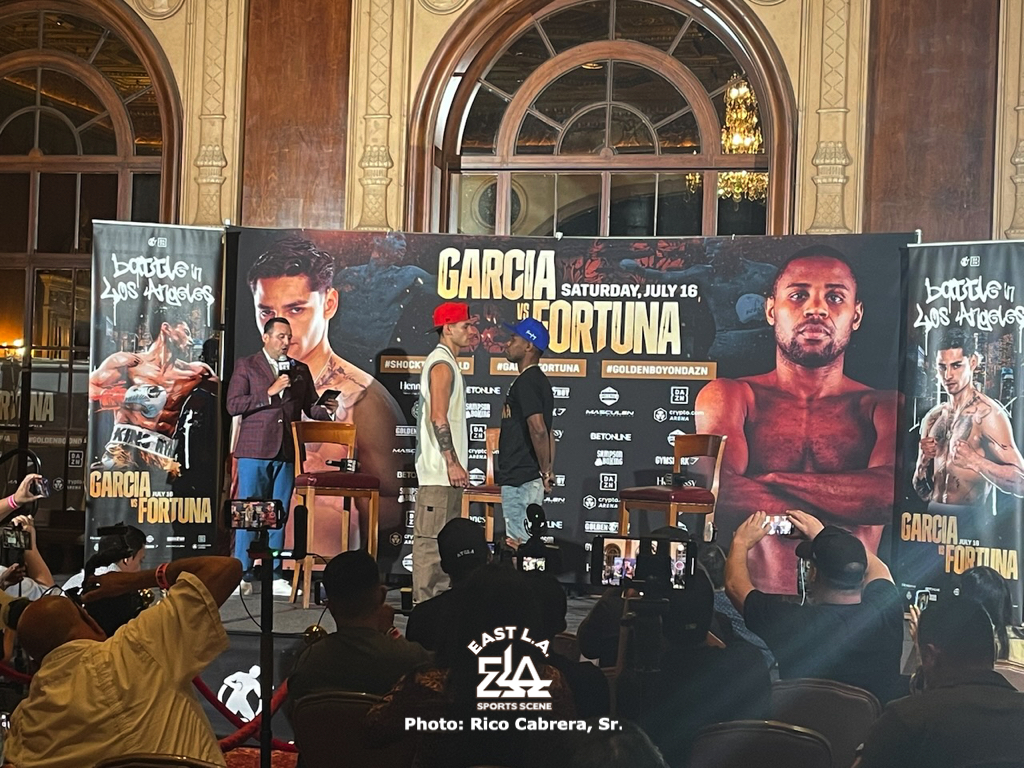 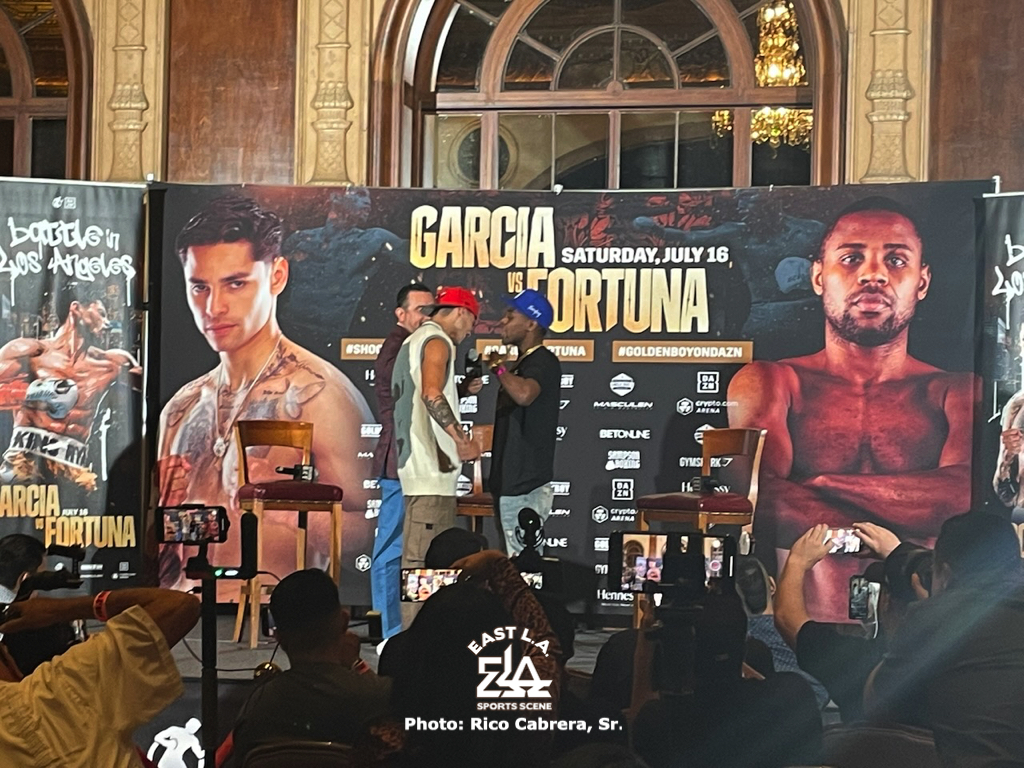 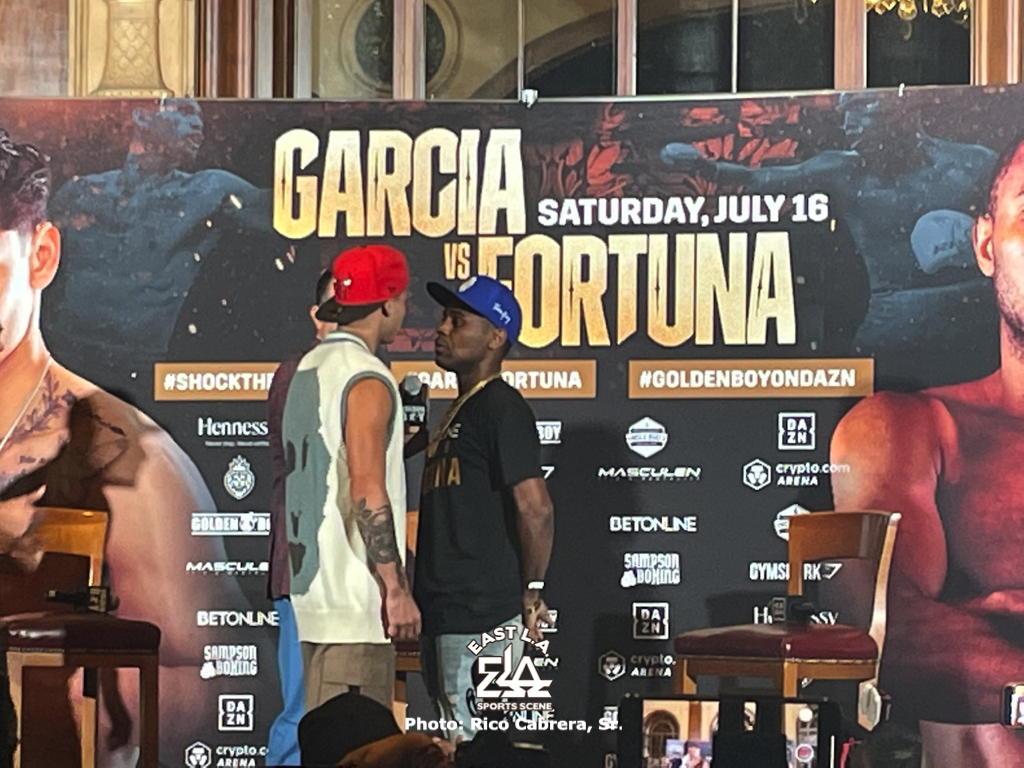 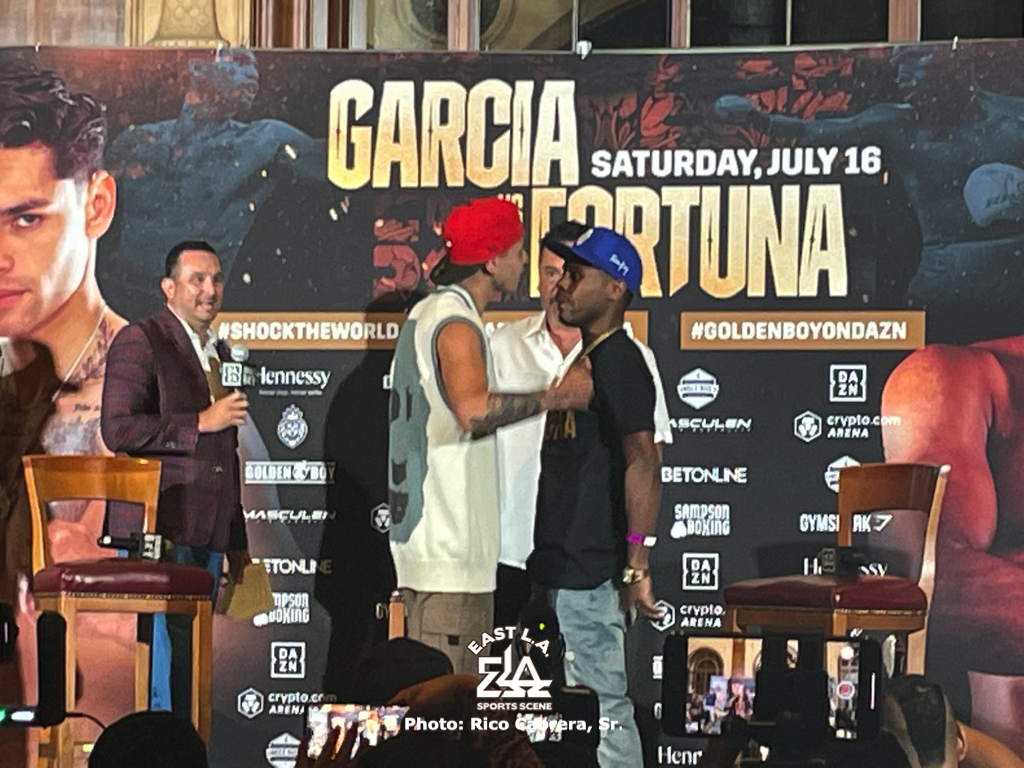 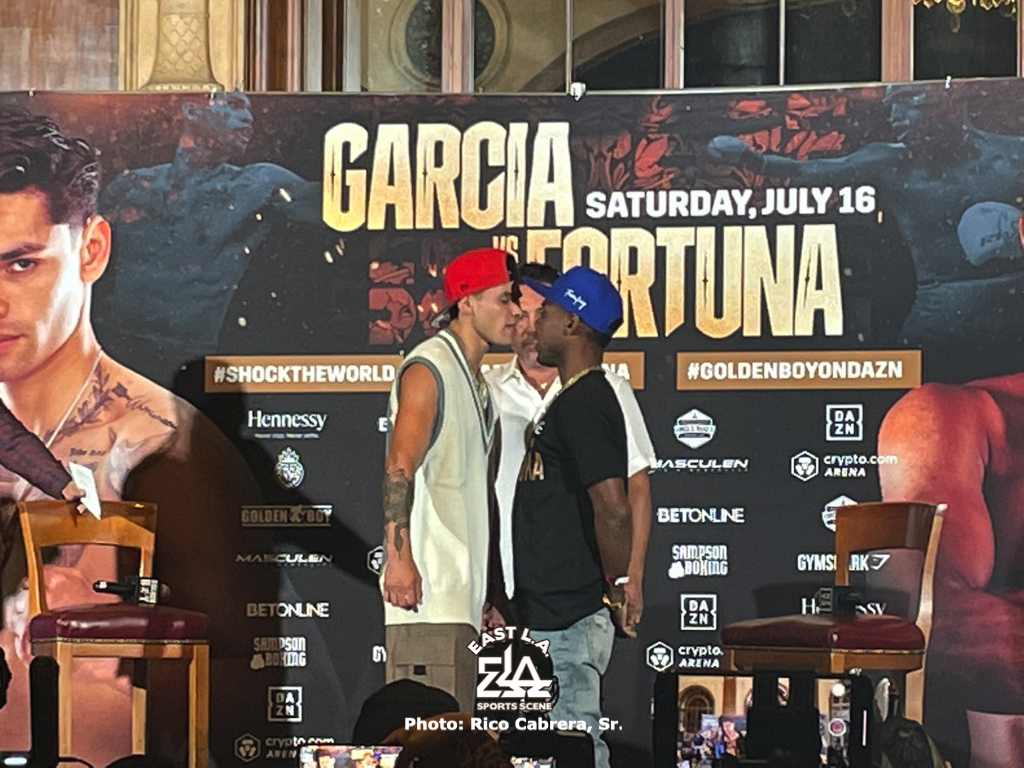 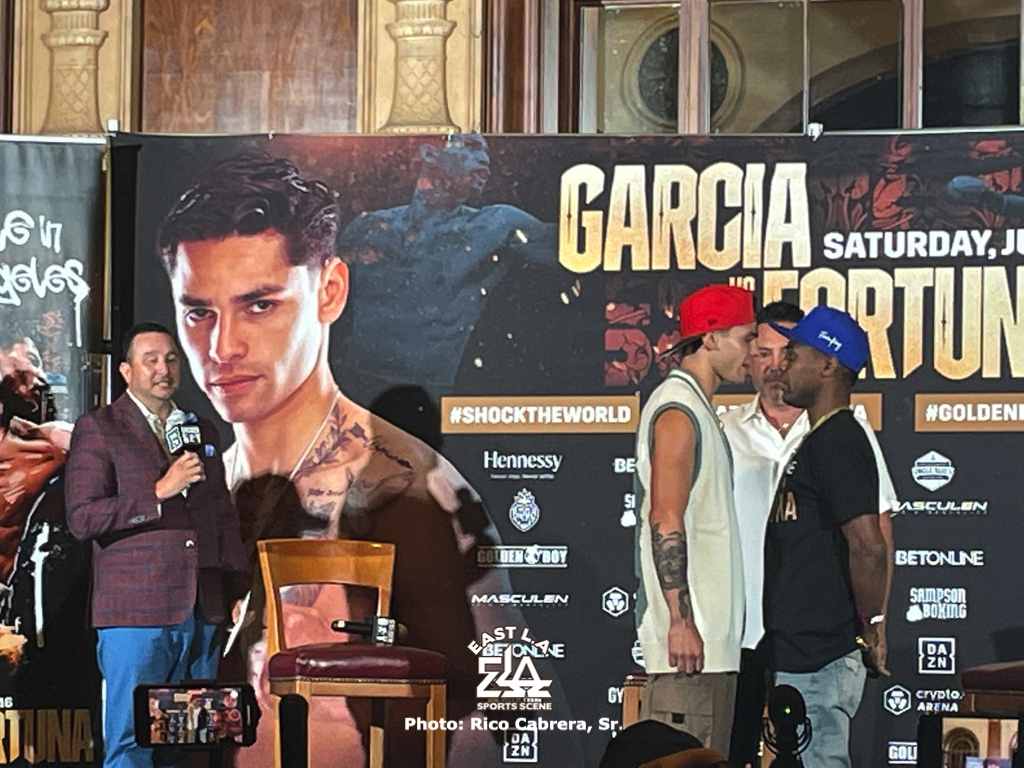 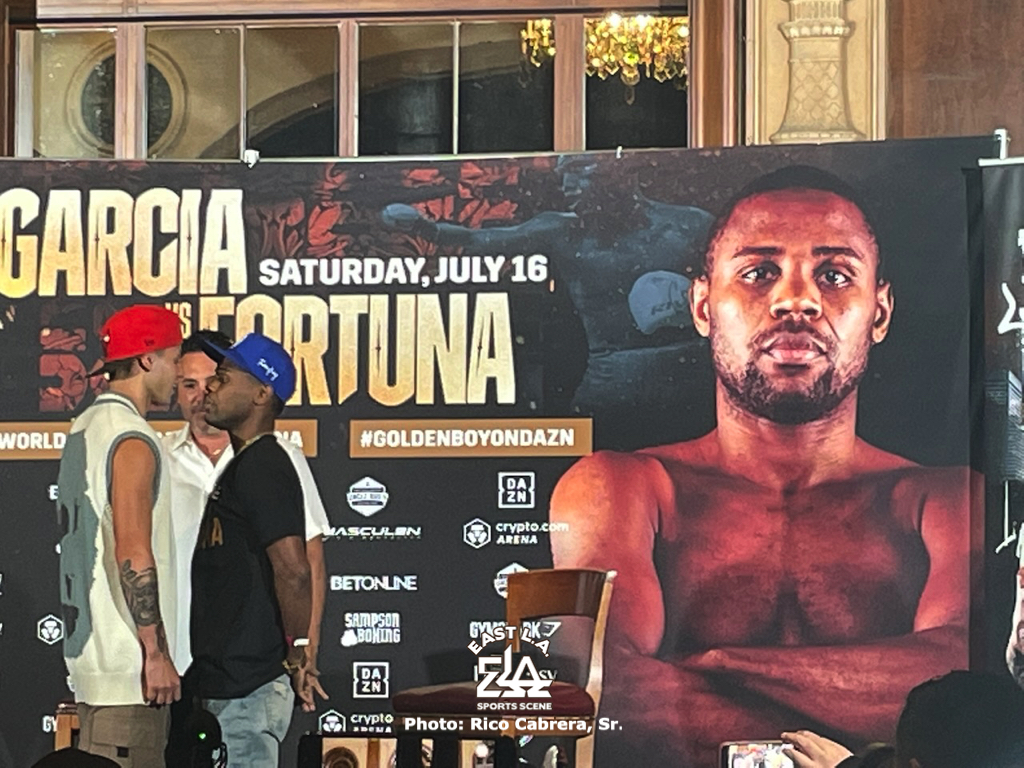 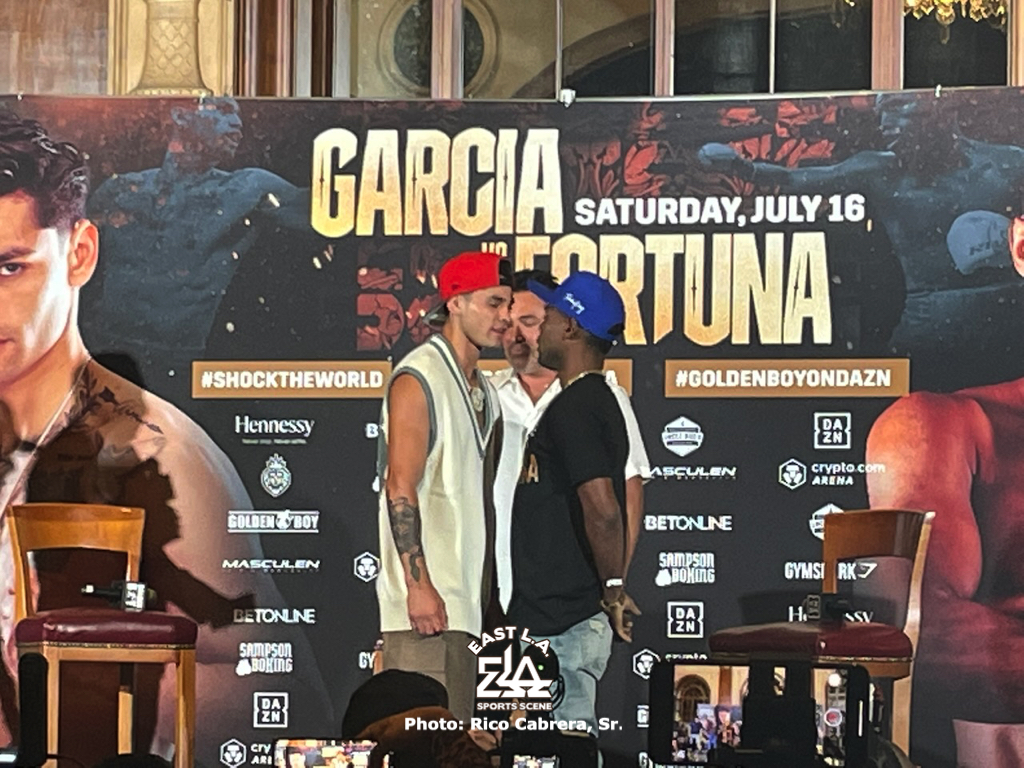 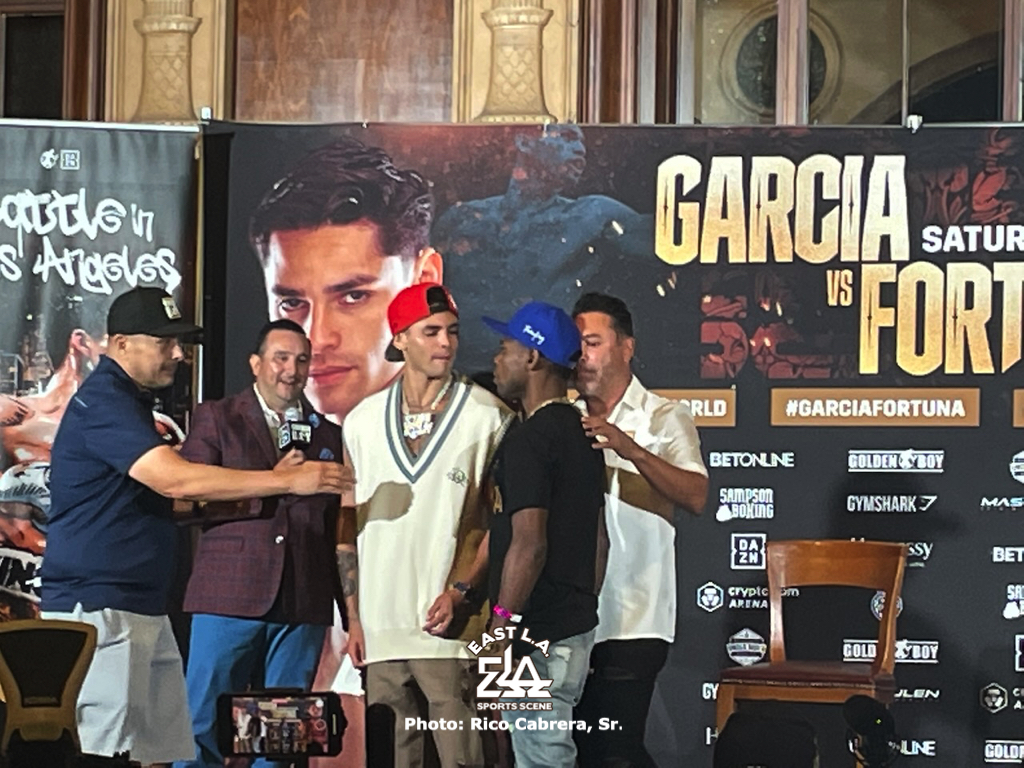 The honor went to CEO/Chairman, Oscar De La Hoya, Golden Boy Promotions, who delivered a nice preview and overview of the Main Event, the Co-Main event and the Undercard for the highly awaited show on Saturday. After Oscar, Duran brought up Javier Fortuna, the underdog for this “must-see” fight in the extremely competitive and star-laden Lightweight, fight category. Lastly, it was Ryan Garcia, who appeared in a casual but very eye-catching fashionista white vest-top, and a medallion that simply said, and read, “King Ryan.”

One of the highlights while the boxers were being interviewed was Fortuna’s gesture of gifting Garcia with a red Chicago Bulls hat he was wearing. Garcia admired the fact that his opponent wore it since Garcia is a Bulls fan. Then in an immediate return of goodwill gestures, Garcia presented Fortuna with a blue baseball cap. Duran had to do his job bilingually, but with an interpreter to help guide the “Q and A” session he had with the Spanish-speaking only, Fortuna. The communications flow was a very smooth one for all present. 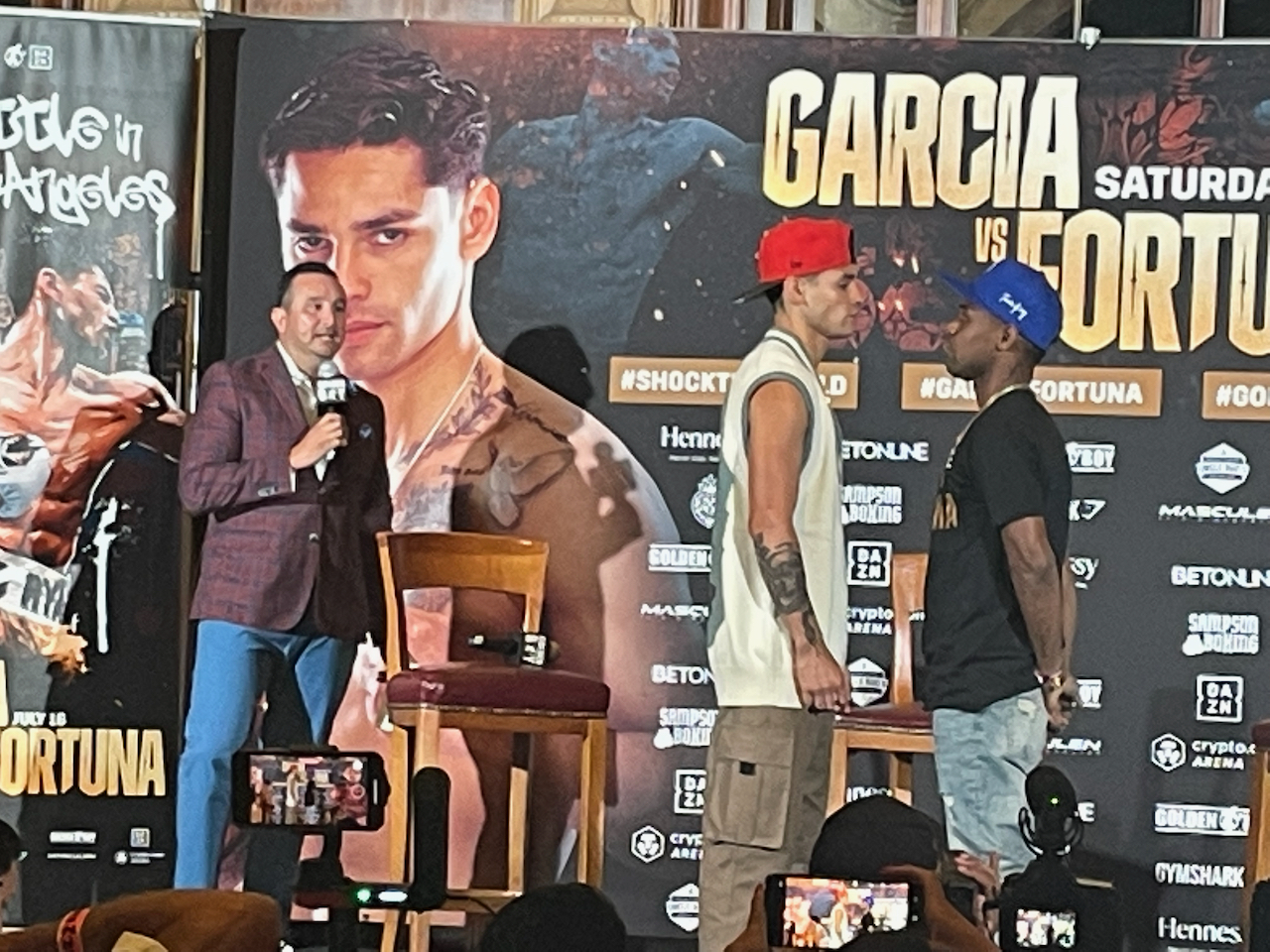 Towards the end of the conference, both fighters stood up to face each other and were given some time to do some verbal, but critical commentary of each other. A few insults were most likely hurled back and forth and in the next moment, they were “face-to-face” and squared off with their final remarks.

Then, at that particular moment, Oscar De La Hoya came back to the stage and intervened to prevent the fighters from taking things to an extreme, and basically served as the event’s arbitrator to calm both boxer’s emotions down and return the event to a peaceful atmosphere.

With that, the Press Conference came to an end as both fighters were then escorted to their “Step & Repeat” stage-locations for the media to engage them on their final thoughts on the outcome of the upcoming battle on Saturday night. 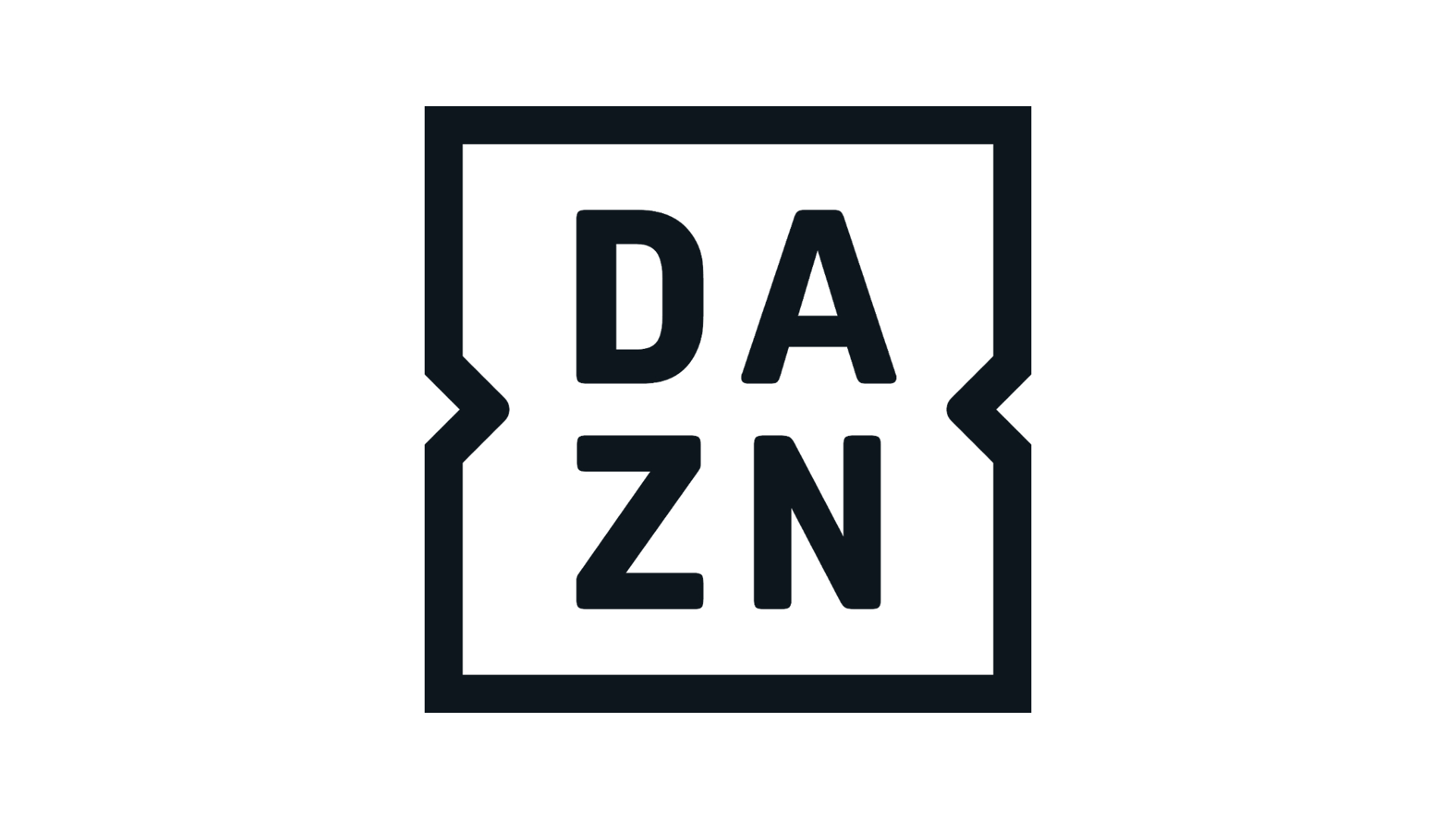 Garcia vs. Fortuna is a 12 round lightweight fight presented by Golden Boy in association with Sampson Boxing. The event is sponsored by Hennessy  “Never Stop. Never Settle,” “BetOnLine – Your Online Sportsbook Experts” and Unlce Bud’s Hemp & CBD. The fight will be “Streamed Live” worldwide on DAZN.

Tickets for the fight are on sale now and are priced at $500, $300, $200, $100, $75, and $50 not including applicable service charges. Tickets will be available for purchase online at AXS.com. CryptoArena.com, and GoldenBoyPromotions.com. 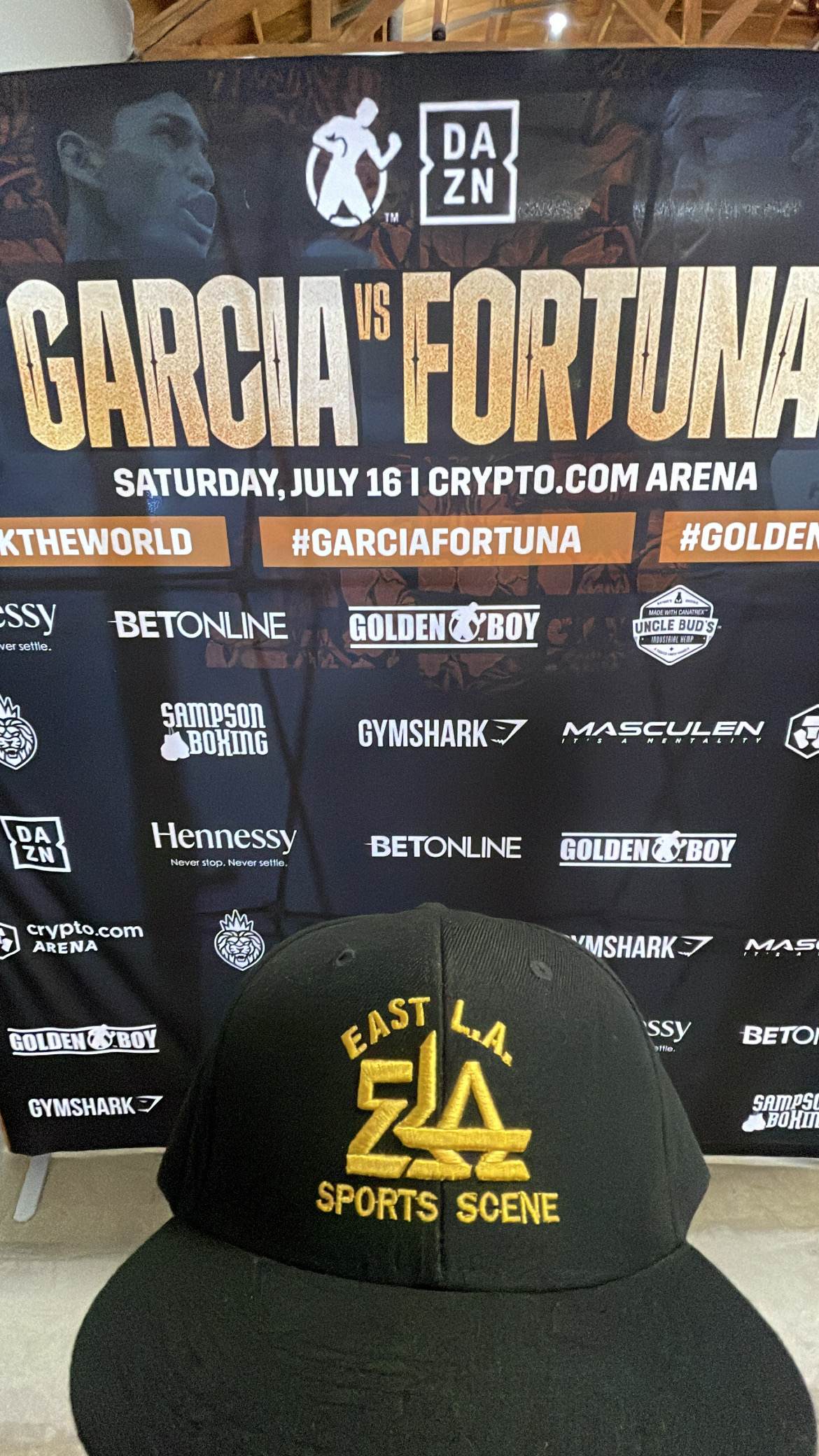