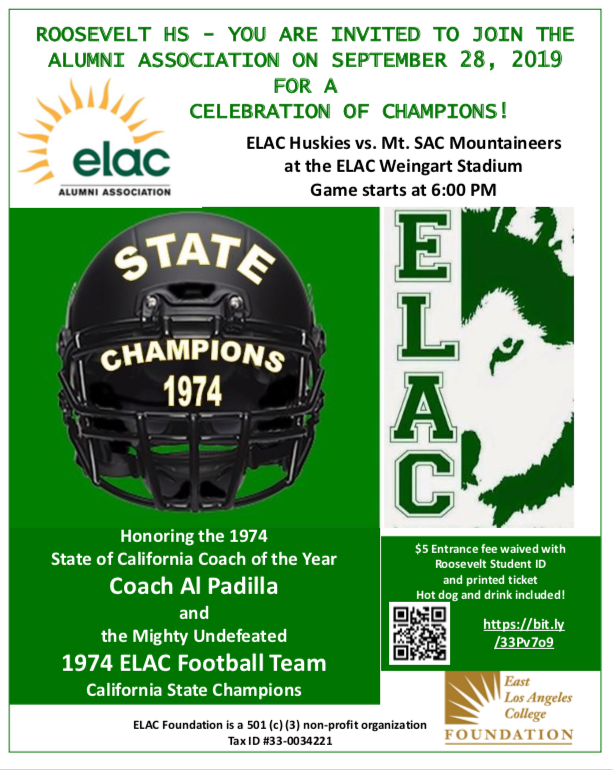 A SPECIAL ANNOUNCEMENT TO OUR COMMUNITY

(East Los Angeles, CA)–-On Saturday, September 28th, East L.A. College will be honoring former Roosevelt Rough Rider, Football Coach and legendary community member, Al Padilla. As many of our East L.A. community senior citizens may be aware, Coach Padilla played for Roosevelt and would later become one of its Assistant Coaches. He subsequently coached at Garfield High School and lastly, at ELAC. As a young man, he was an outstanding student athlete for the L.A. based, Occidental College Tigers football team that played the Colorado A&M Aggies in the 1949 Raisin Bowl in Fresno, CA. After his playing years were over, he became quite a coaching legend here in East L.A., and in 1974, he was voted the State of California “Coach of the Year”  for leading his Huskies to an undefeated season, (10-0), and then on to their first State Junior College (JC) Football Championship.

And, to this end, ELAC has extended an invitation to the current Roosevelt Rough Riders student body and all alumni to attend this game vs. the Mount San Antonio (MSAC) Mountaineers. Kick-off is set for 6:00 pm. Many teammates from the ’74 Championship team are planning to attend and will be honored with their life-long friend and most unforgettable coach.

For all current student body members, entry to the game will be FREE and will include a hot-dog and a soda. All the students will need to do, is to print out a game ticket via the Eventbrite site that was created just for Roosevelt.  Here is the link https://bit.ly/33Pv7o9  Please review the flyer with a QR Code for those who can access the site via cell phone.

Each student must present one of these tickets along with their Roosevelt HS ID Card at the game for entry. In order to receive a hot-dog and a drink for FREE, each student must then present the ticket and school ID at the designated concession stand. There will be signs posted in-and-around ELAC’s Weingart Stadium.

The ELAC Alumni Association, promoters of the event, hope to fill the stadium with many of Coach Padilla’s family, friends, and community members as they assemble to enjoy a great ELAC football game and equally as important, to recognize and honor a former Roosevelt High School Rough Rider, ELAC’s Huskies Head Football Coach, and just a great friend, in the likes of Coach Al Padilla.

General Admission for all others will be $5.00 at the gate. There will be ample parking on campus in the parking structures as well as adjacent to the main stadium entry area.

2021 MLS All-Star Game To Feature Its Best vs. LIGA MX