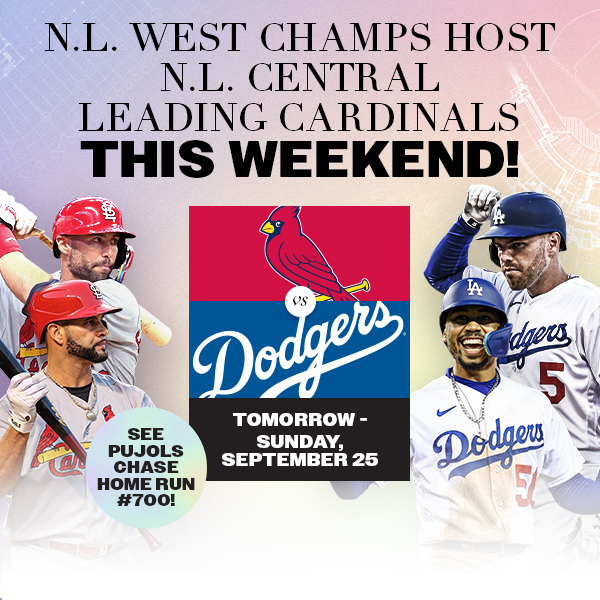 (East Los Angeles, CA) [From the Editor’s Desk]: Dodger Nation and all of Major League Baseball, both teams and fans, will be riveted on the return of “La Máquina,” Mr. José Alberto Pujols, a native of the Dominican Republic, to Dodger Stadium this weekend as he closes in on becoming only the fourth player ever to reach the most prestigious 700 Home Run Club. Only New York Yankee, Babe Ruth with (714), Atlanta Braves, Henry Aaron with (755), and San Francisco Giants, Barry Bonds with (762) have laid claim to be there.

So, in greeting Alberto with a warm Bienvenidos, now’s the time to make your ticket purchase and/or purchases to see if you and your party will be eyewitnesses to baseball history in the making. To purchased your tickets, click here.

As important as it is historically, it hopefully will also be a fitting and an uplifting moment for all fans who have followed Pujols in his unbelievable career in the Majors, whether he was a Cardinal, an Angel, or a Dodger player.

Why not give the man a standing, roaring, and thunderous round of applause during his final drive for a great accomplishment and an eventual celebration in the world of baseball. He has certainly earned it! ¡Qué Viva Alberto Pujols!