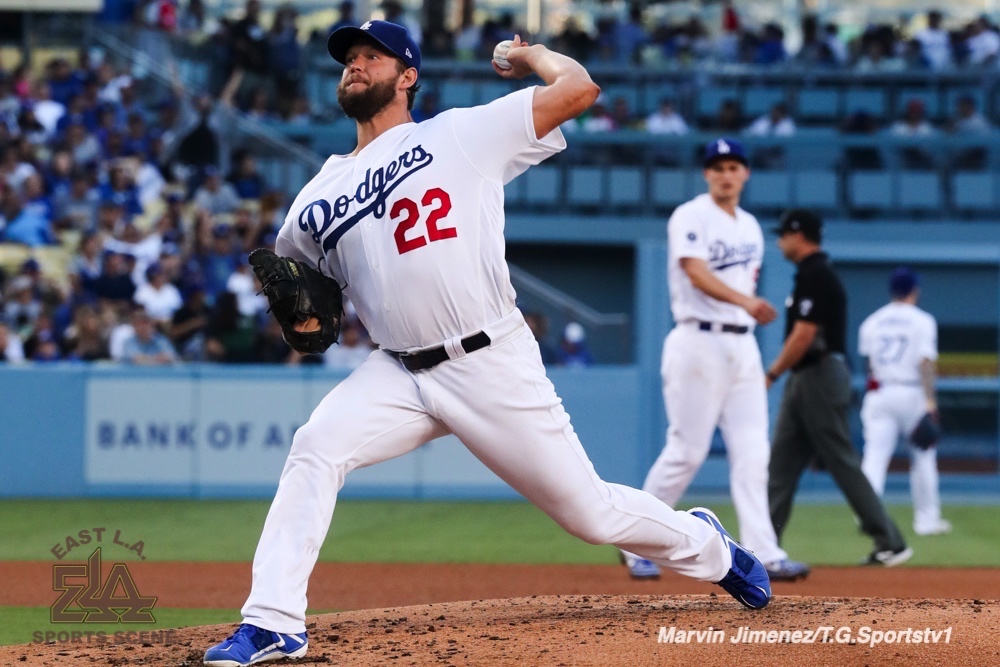 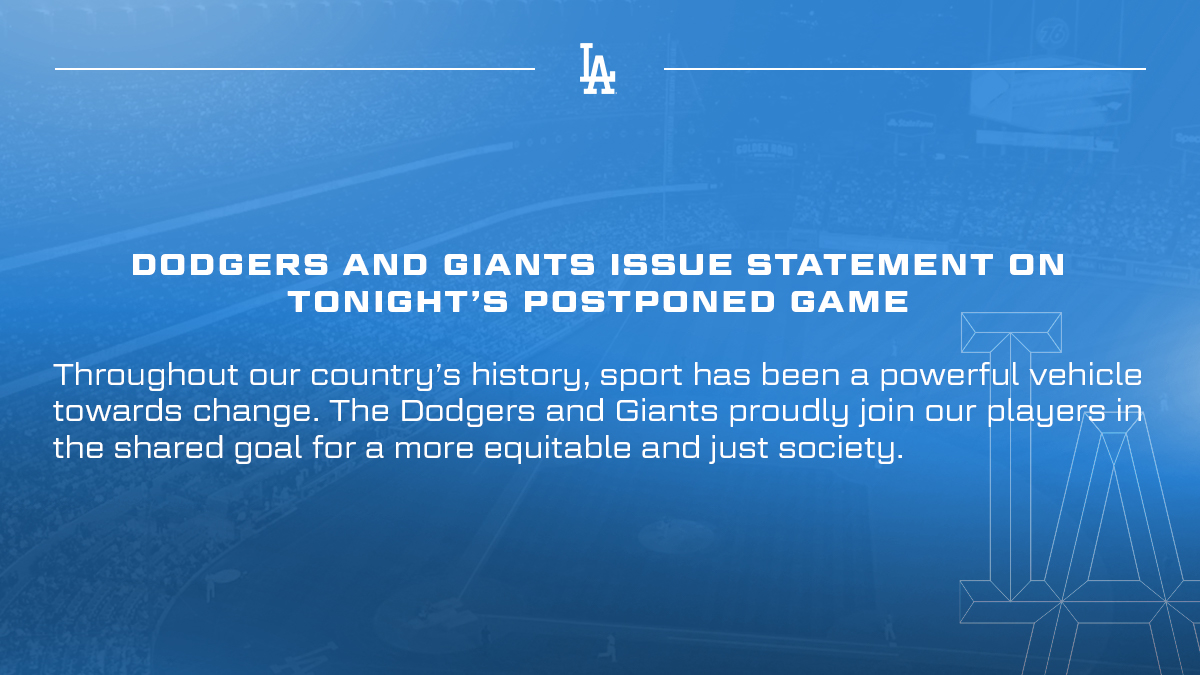 (East Los Angeles, CA) – September 1, 2020 [From The Editor’s Desk]: The Dodgers keep moving on like the steamroller they’ve become during this most oppressive COVID-19 pandemic season. They have not lost a series yet, but while the odds of them losing one are good in Vegas, don’t tell the Dodgers or their steadfast fans. With their over-the-top pitching, hitting and fielding, they’ve managed to capture the baseball spotlight in its most dominant brilliance. Manager David Roberts, is liking and appreciating his squad with its multi-dimensional group of talented, seasoned, and young players. Let’s keep cheering on the“Big Blue Wrecking Crew!!”  To follow the Dodgers on their website, bookmark it by clicking here. 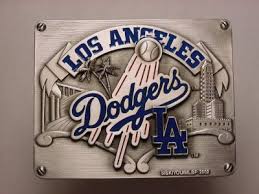 Hope you enjoy a great read on our second write-up on the Dodgers as they sport an amazing record of (26-10), good enough to have the best record in MLB and be all alone in 1st place in the NL West. They have a (4.5) game lead over the San Diego Padres. Next Up: As they return home, the Arizona Diamondbacks (14-21) are here and currently in 5th place. They play a 3-game series that began began yesterday, 9/1. First pitch is set for 6:40 pm in Game #2. After the D-Backs, the Colorado Rockies stop in for another 3-game set.

Dodgers Weekly Roundup August 24-30 – By Hector Ponce: The Dodgers ended the week (4-2) and continue their unmatched streak of remaining unbeaten in every single series thus far. After a day off on Monday, they opened their road trip against the rival San Francisco Giants on Tuesday. Kenley Jansen blew his first save of the season giving up a towering 415 ft. home-run to Brandon Belt in the 9th inning. Scott Alexander followed that up by giving up a game tying single in the 10th inning. Reliever, Dennis Santana would then go on to pitch the 11th and give up a game-ending home run to Donovan Solano as the Dodgers lost (10-8) in the series opener. 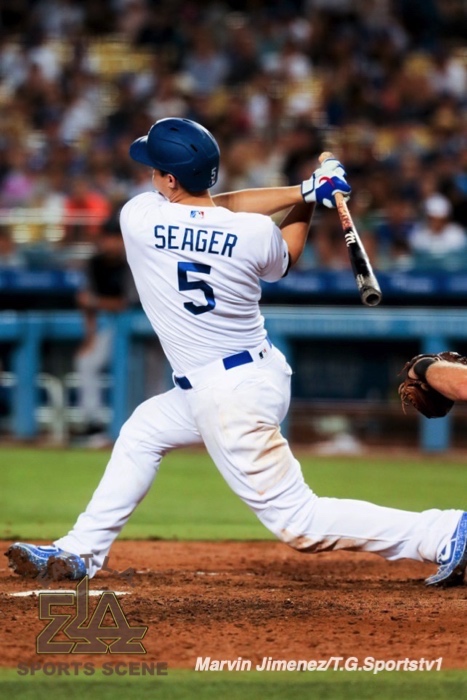 The Dodgers were scheduled to play Wednesday evening, 8/26, however, following the trend to boycott scheduled games by the NBA and other MLB teams, the Dodgers and Giants used their platform to protest against the excessive use of force by police in the unfortunate event that left Jacob Blake paralyzed in Kenosha, Wisconsin. In that frame of mind, the Dodgers showed their unity as a club when they supported their MVP candidate, Mookie Betts. in boycotting the game due to their solidarity in staunch support of the BLM Movement. Mookie stated after Tuesday’s game that he was encouraging his teammates to play, even though he had decided to sit it out in his personal show of solidarity. However, Dodgers Manager, Dave Roberts, Clayton Kershaw, Kenley Jansen and other leaders on the team decided to stand in unity with their newest teammate to help raise further awareness.

Following their team boycott the Dodgers played a double-header on Thursday which included two (7)  inning games. In the first game they were led by Clayton Kershaw who threw (6) shutout innings and would go on to win (7-0). AJ Pollock and Austin Barnes drove in two runs a piece leading the Blue Crew’s offense. 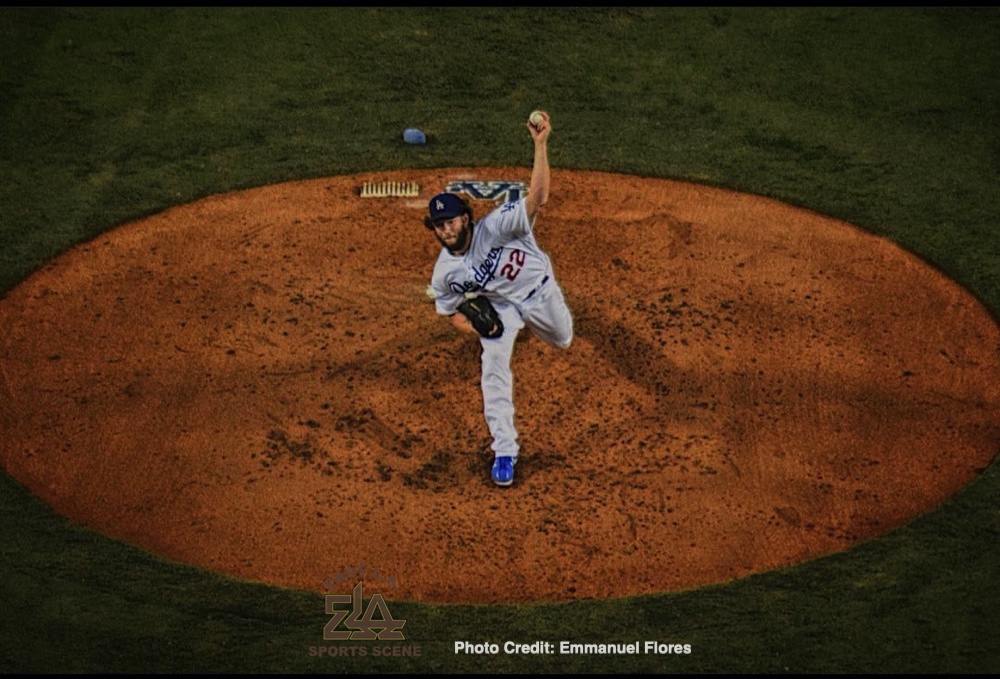 In game two of the doubleheader the Dodgers opted for “a bullpen game” which saw seven different pitchers toe the rubber. The bullpen was dominant, not allowing a run through seven, and allowing just two hits. Joc Pederson started the scoring with a missile to center field giving the Dodgers a (1-0) lead in the top of the 2nd. The second and final run crossed after a Will Smith double in the 4th inning. All-Star closer, Kenley Jansen, came in to end the game avenging his blown save effort from the opening game. He did just that by striking out the side in the final inning,

The Dodgers then headed off to Arlington, TX to start a three game series against the Rangers. The annual commemoration of the MLS’ tribute to Jackie Robinson Day was also recognized throughout the League, with all players wearing his jersey, Number 42. The actual commemorative date is usually celebrated on April 15th, but due to the pandemic, it was re-scheduled for 8/26. 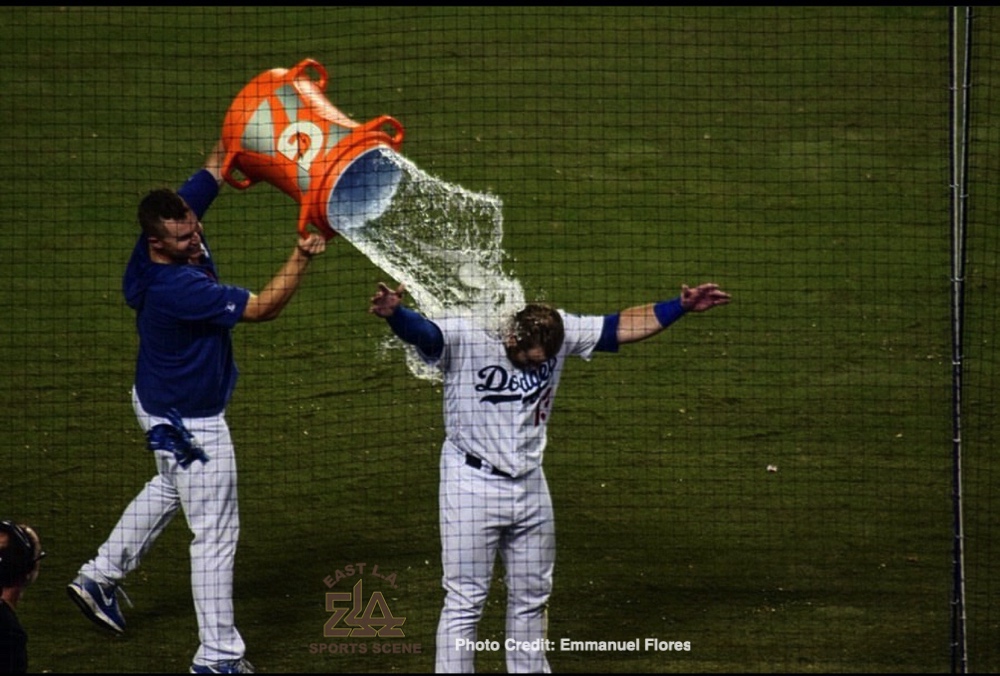 In other news: At the beginning of the week the Dodgers made several moves with their roster. First, they added local prospect Jacob Amaya to their 60-man player pool. Amaya attended South Hills high school in West Covina and was drafted in 2017. Manager Dave Rogers also added top prospect Gavin Lux to their main roster during the week, although he had a shaky string of at-bats. But Roberts expects him to start against right-handed pitchers moving forward. With the trade deadline on August 31st, the Dodgers have been linked to several players including Lance Lynn and Mike Clevinger of the Cleveland Indians. And, it appears that the “asking price” for both may be very high for Andrew Friedman, Dodgers’ President of Baseball Operations, who typically looks for value at the trade deadline. 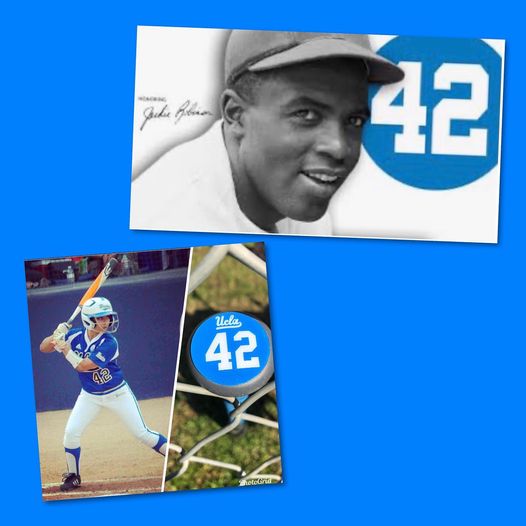 By The Editor: A Special Tribute to Hall of Famer & Social Justice Advocate, Jackie Robinson, #42. In a then 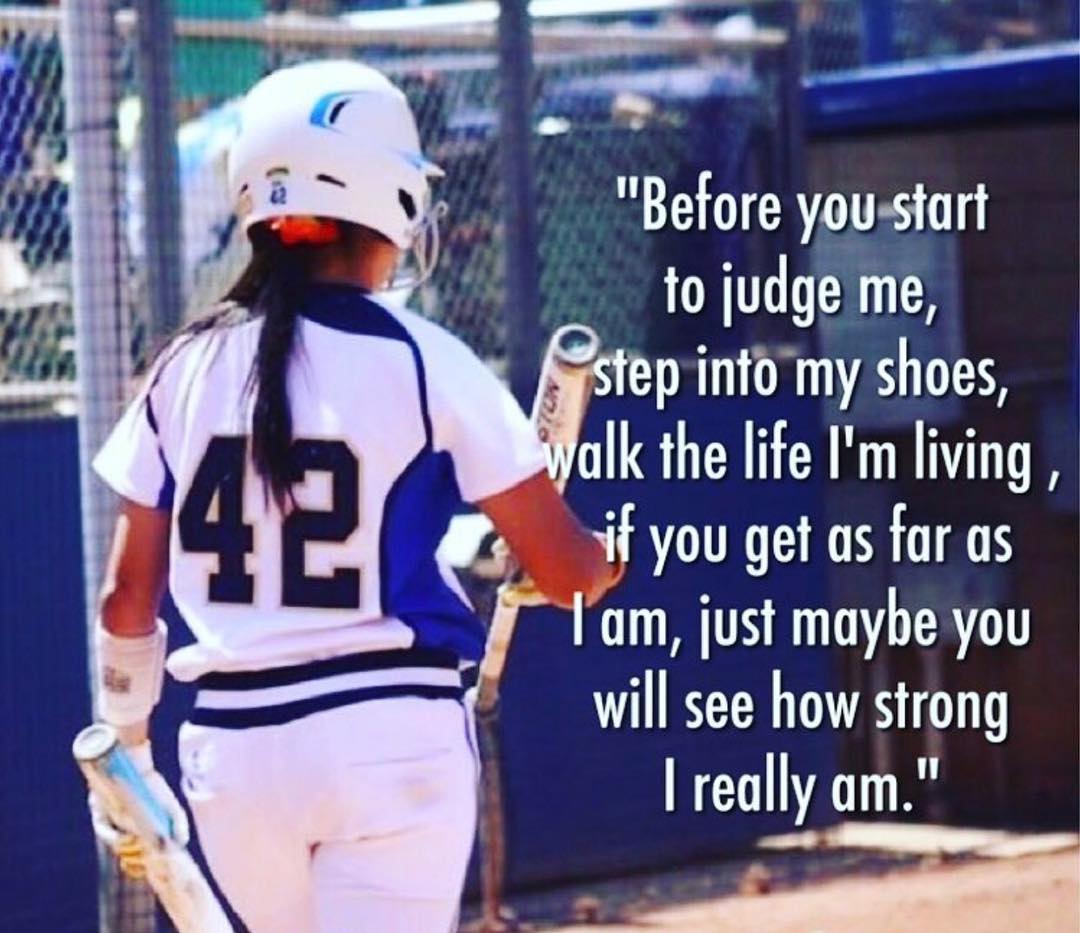 timely UCLA Women’s Softball salute to Mr. Robinson, former L.A. City Section/Lincoln HS Tiger, Jelly Felix, (shown in picture on left, just below her fellow Bruin Alumni & on the right with his quote) earned the privilege and great distinction of proudly wearing Jackie’s coveted, unmistakable, and inspirational jersey bearing his number for the ages…#42, during her student-athlete career at UCLA. To view a 2018 story on Jelly, that we produced regarding her thoughts of wearing his number, click here. 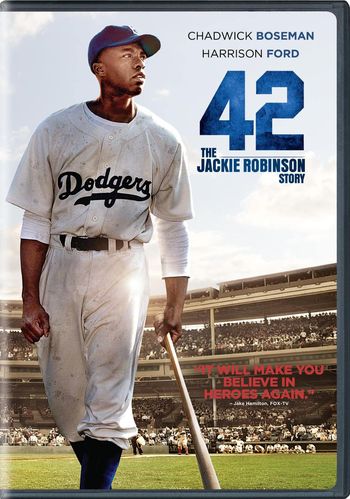 Depicted in the poster of the movie, The Jackie Robinson Story, is the now late, and great actor, Chadwick Boseman. Although the week began in a most celebratory note, in honor of Kobe Bryant’s memorial observance by the Lakers and the NBA, by week’s end, and on an extremely sad note, Boseman, who played Jackie Robinson in the featured film “42”, passed away on Friday, 8/28, from colon cancer at the unbelievably young age of (43). In keeping with the MLB’s proud tradition, all Major League Baseball teams wore the honored and fabled number on their jerseys in Jackie’s commemorations on 8/26. The Dodgers also acknowledged the young, shining movie star by inviting him to throw out the celebratory, and traditional “First Pitch” to Matt Kemp on July 15, 2013. To see it on Youtube, click here.

About Our Correspondent: Hector Ponce, a native of Boyle Heights, is entering his final semester as a Business Management Major at California State University, Long Beach. He is a graduate of St. John Bosco High School in Bellflower. He has previous experience covering the Dodgers and Angels with Fansided and SoCal Sports Hub respectively.

LAFC Gets It Done With Strong, Convincing Win