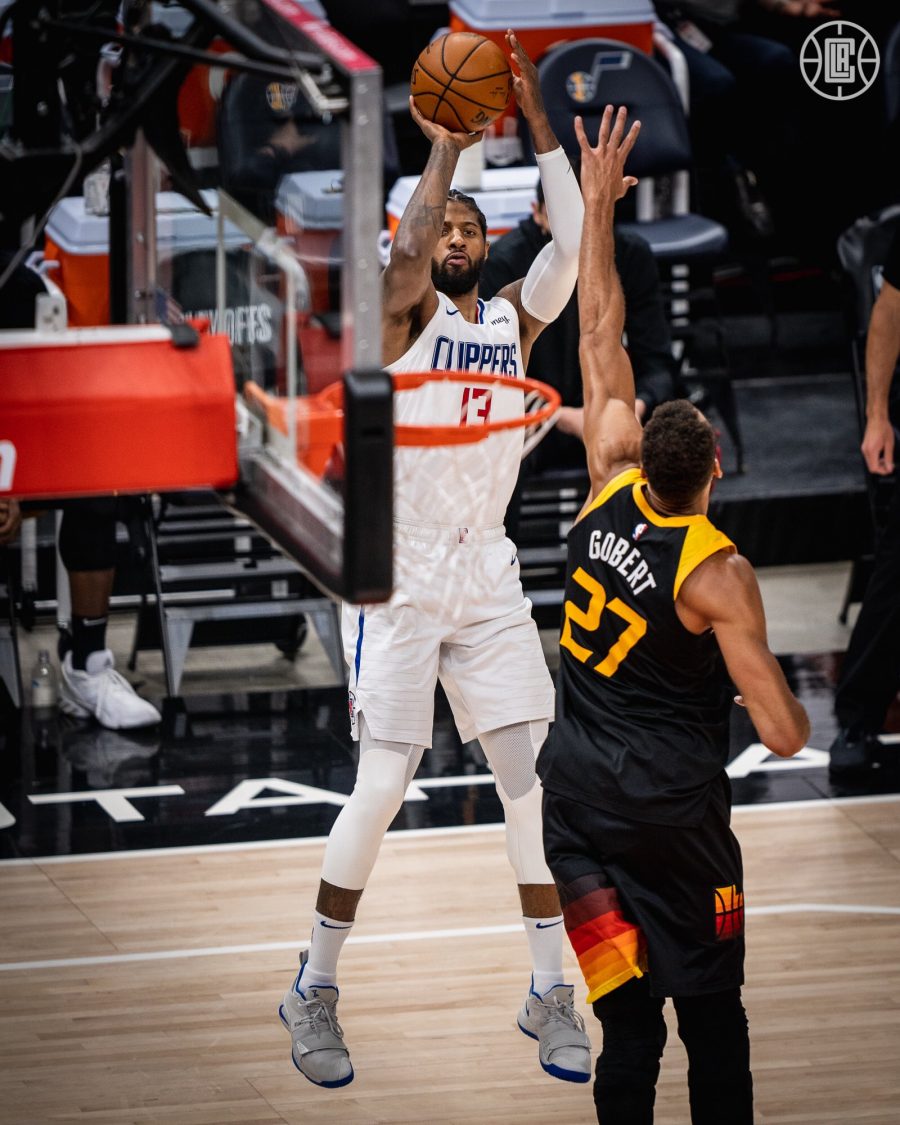 (East Los Angeles, CA) June 17, 2021 [From The Editor’s Desk): The Clippers went into Game 5’s clutch playoff battle, “one-man down”….Why? Because their Co-Franchise Player, Kawhi Leonard’s diagnosis revealed a badly sprained right knee, that he unfortunately suffered in Game 4’s huge win. What was next for the Clippers on the road in a pivotal road Game 5? Well, humbled and deeply concerned about his teammate’s condition, Paul George, the L.A. native son, just simply put on his gloves, took his instructions, answered the bell, and came out swinging hard and often. Clippers fans were in for yet another PG-13 masterpiece. 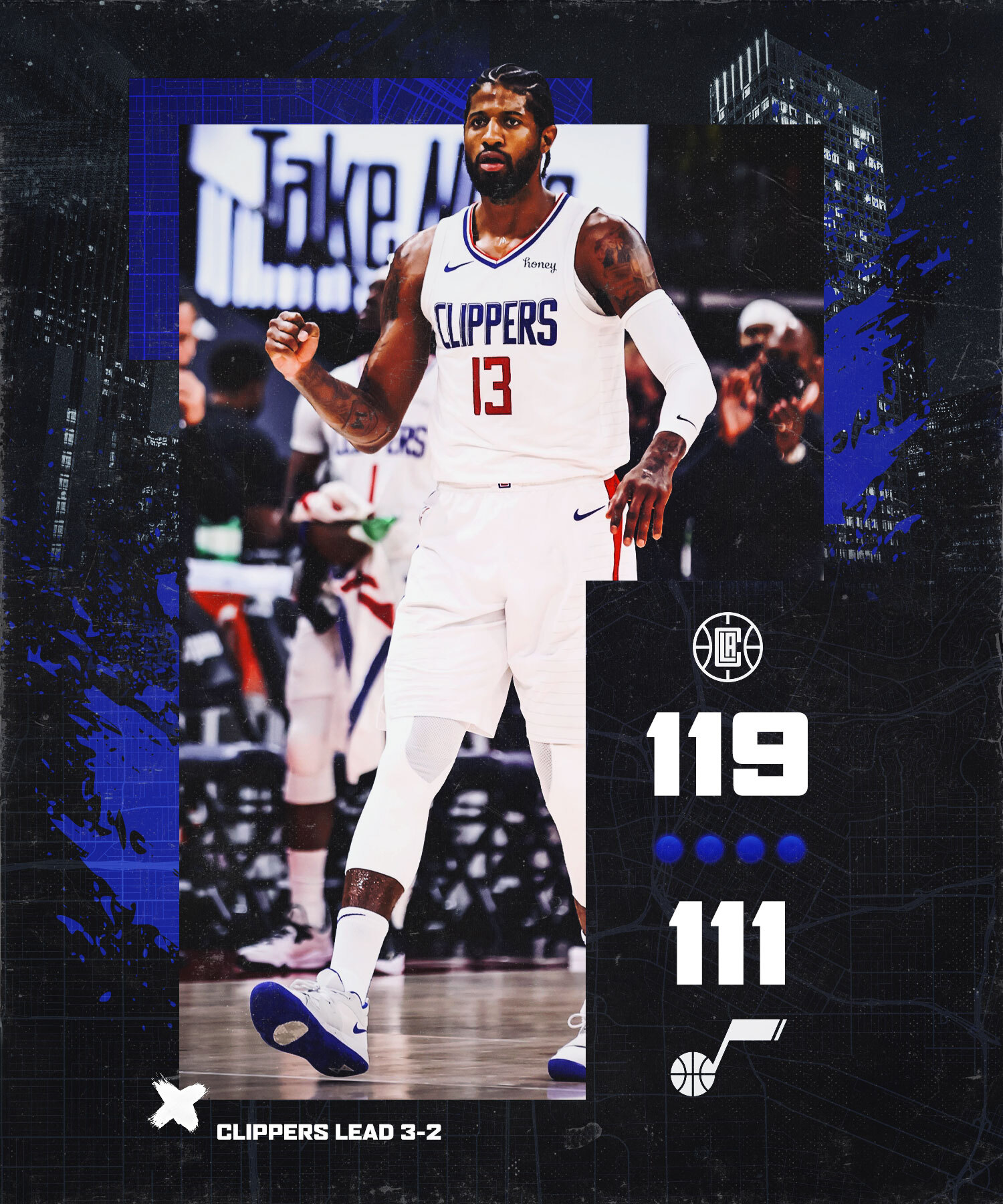 An injury incident like that always triggers everyone else on the team to be prepared to answer the ever-present question, “Who’s the next man up?” Lo and behold, take your pick of the performances rendered by “PG”, the Pack Leader to rally his “Band of Brothers” and play the Utah Jazz in front of their home crowd of 18,303 screaming and solid gold T-shirted wearing “Take Note” fans. 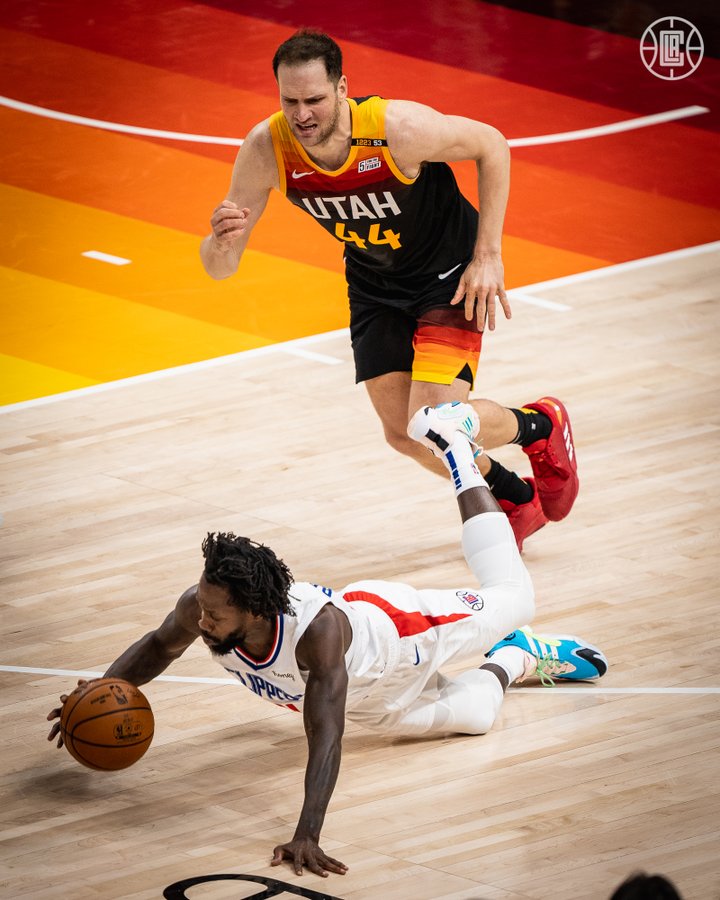 In spite of all the torrents of fan negativity, “PG-13”  and Company simply, and surgically went to work and put in a tremendous day’s effort. George led the way with 37 points, 16 rebounds, 5 assists, & 2 blocks in 40 minutes, for a monumental and heroic effort to unanimously earn the “Player of the Game” award.

At best, the Jazz were present for the entire first half as they drained a record (17) three-pointers, keeping them just ahead of the Clippers who had trailed by as much 10 points lead in the period. But, because there are 48 minutes in a game and four quarters, there was still a ways to go. The lead was cut to five by halftime. 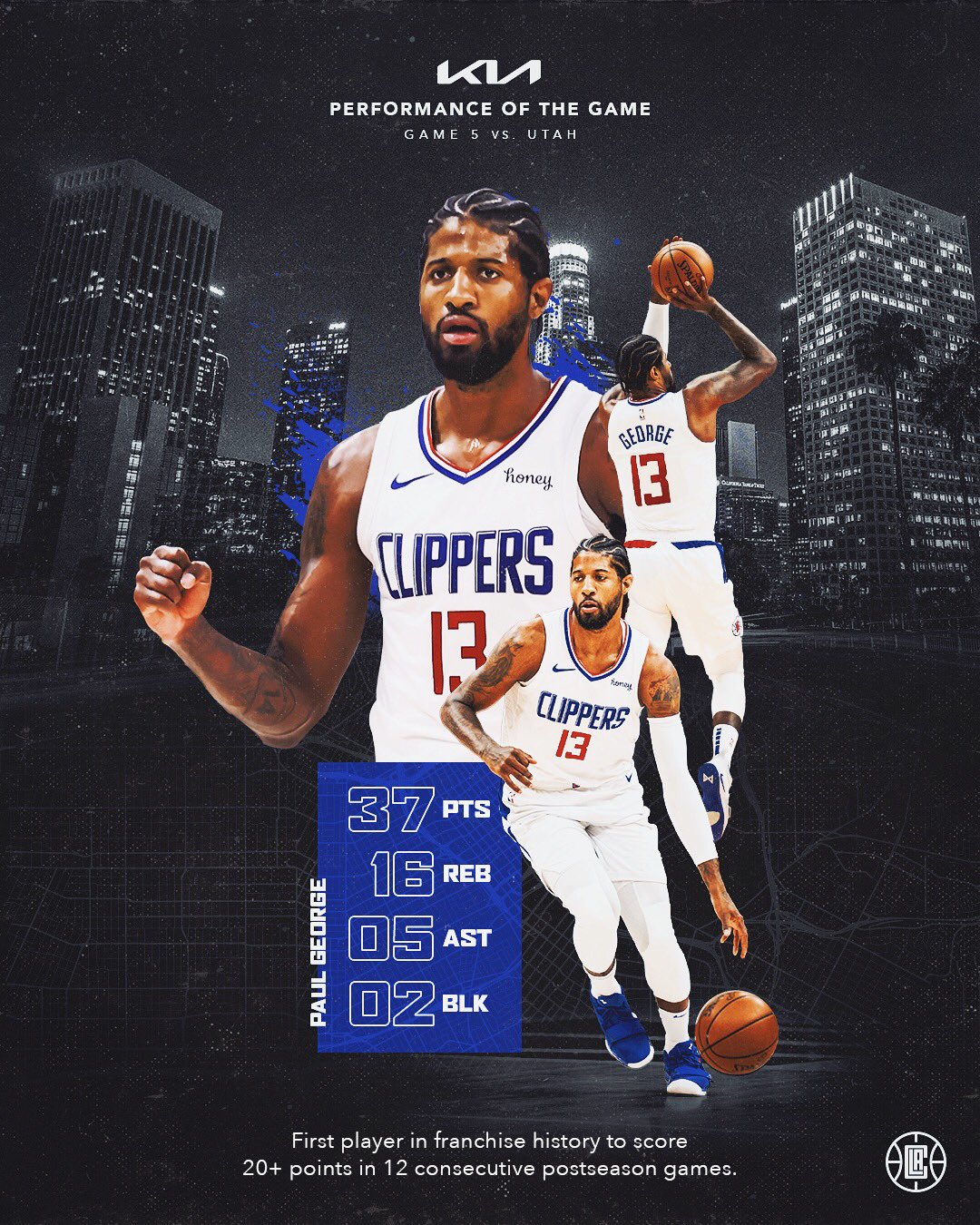 (2nd Half): The third quarter was critical for the Clippers to play “lock-down” defense, make stops in small bunches, get into their offensive sets, and start hitting their shots. Bingo! Just what the Dr. and Coach Tyronn Lue ordered. The period’s game stat truly summed it all up as the Clippers scored (32), compared to just (17) for the Jazz.

The final quarter was “nitty-gritty” time for the entire (12) minutes. It would certainly become a game of runs, and the team who produced the most and the most successful ones, would come away with the victory. However, one play, by one man, who stepped it way up, was starter, #14/6-5/Terance Mann, who became Thee Man when he powered his dribble to the hoop guarded “one-on-one” by Center/7-1/Rudy Gobert. But one thing of super dimensions occurred on his glide path to the basket..what would it be?? Answer…another monster “in-your-face” – “rim rattling” dunk, this time by the young second year Clipper from FSU, as he threw down one of the best competitive dunks we’ve seen since Kawhi Leonard’s Game 4 masterpiece over Derrick Favors. The result…it gave the Clippers the utmost confidence to close out the game, since “Mr. Momentum” was clearly now on their side. 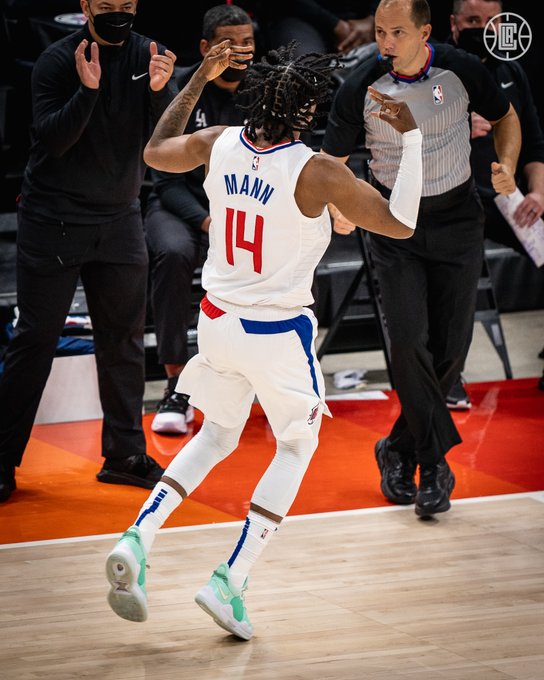 As the clock was winding down, the Jazz appeared shell-shocked and defeated on their final attempts at their basket when, Donovan Mitchell and Jordan Clarkson both threw up very badly missed 3-point shots. With that, it was Game Over! The Clippers plane ride home was nice, and celebratory as was the (3-2) series advantage they earned with their hard-fought road win minus, Mr. Everything, Kawhi Leonard. 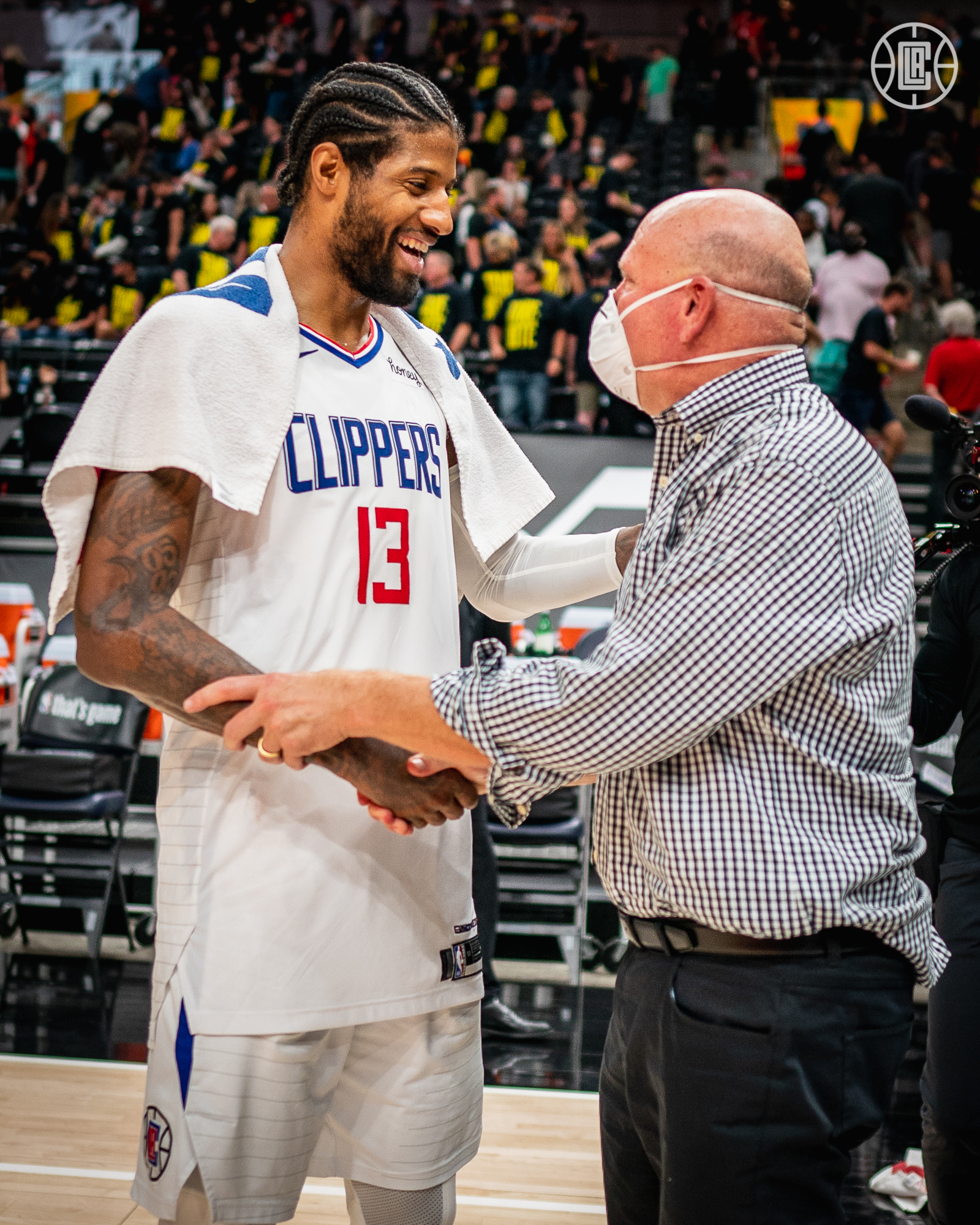