Bruins In “Must Win” Game To Keep Chances Alive 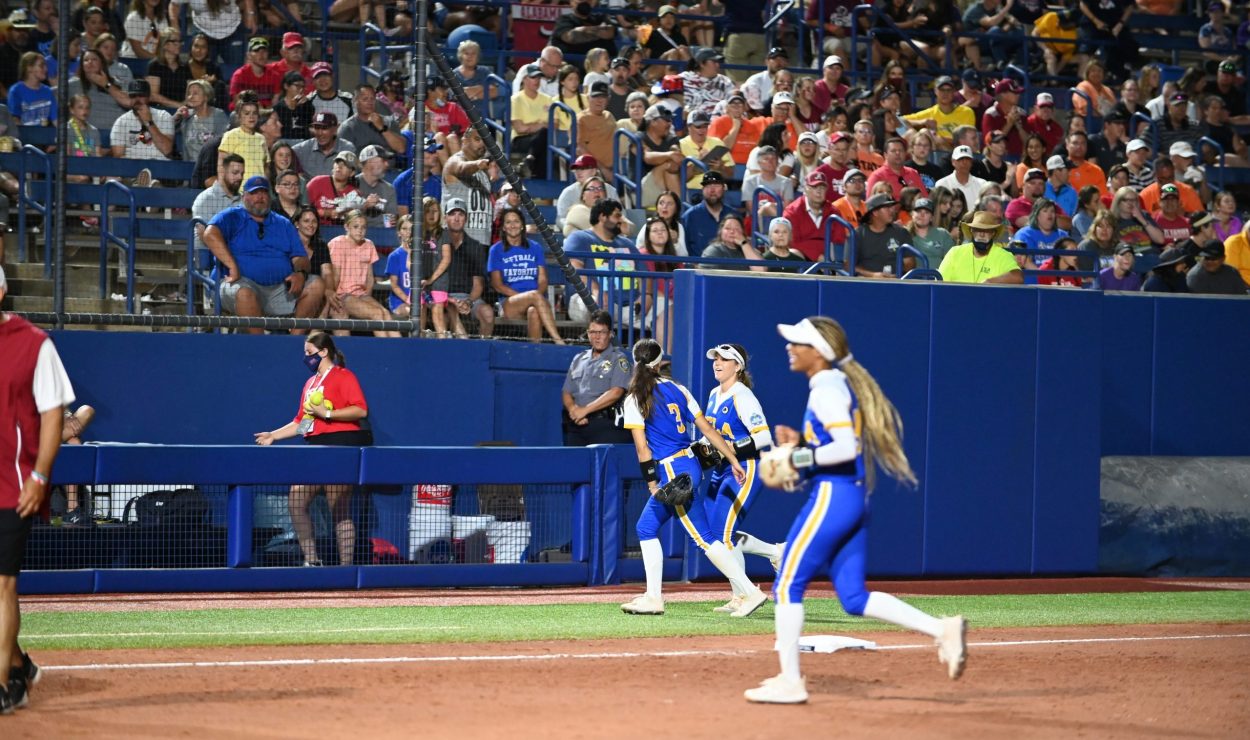 (East Los Angeles, CA) June 5, 2021 [From The Editor’s Desk]: Day two of the Women’s College World Series (WCWS) in Oklahoma City is always a good feeling if you’ve advanced into the Winners Bracket. The Bruins certainly fit that description and were prepared to face the #3 seed, Alabama Crimson Tide in the second game of the day, and in the highly coveted national “Prime Time” slot of 6:30 pm (PT) and 9:30 pm (ET).

Going to the circle in her second consecutive start for the Bruins was their ace, Rachel Garcia. During the season, Garcia did not face this type of a drastic dilemma very often, for she had tremendous support from teammate, SR/RHP/#8/Megan Faraimo, who posted an eye-popping (19-3) record going into the WCWS. The question arose of her whereabouts and it was learned that she had not made the trip to Oklahoma City with the team due to the UCLA Medical team treating her for an arm injury. Her absence was felt when it became obvious that Garcia was tiring early and did not have her regular routine and zip on her pitches.

For the Crimson Tide, it was the right hander, #14/P/Montana Houts, who came into the game with an impressive overall record of (26-3). In addition to being named the starting pitcher, she was celebrating her 21st birthday on this day. So the incentive and motivation was brimming over the top if you were to have traded places with her.

All NCAA Division 1 Softball fans around the country knew the high stakes that were in play in this contest…the right to remain in the winners bracket, making the path to the Final Four, much easier to reach from this bracket.

(Game Recap): As the visiting team, the Tide drew first-ups, and when lead-off batter, #11/Alexis Mack, got on base with a generous hit, awarded by the official scorekeeper, Alabama was in business. The ESPN Slo-Mo replay showed that #97/3B/Delanie Wisz’s throw was “off-target” and drew #37/1B/Kinsley Washington into the back of the runner as she tried to tag her out. In attempting that move, the ball ricocheted off her glove and rolled up against the foul-line backstop. She then stole second moving into scoring position. Next up was the Tide’s #16/Catcher/Bailey Hemphill  and she delivered a double that scored the game’s first run. But as a new batter came up, the now tiring arm of Garcia was becoming evident. She threw at least 30 pitches just in the first inning. The second run was produced when #18/DP/Jenna Johnson singled to shallow center, bringing in Hemphill who had moved up to 3B. The score after this at-bats was Alabama (2), Bruins coming up.

For the Bruins, they could neither “rally-up” nor retaliate with their bats and base-running in any given frame, as they did against FSU. They were efficiently set down in simple order, inning by inning, by a highly skillful pitcher who basically threw a carbon copy of Garcia’s effort against FSU the night before. Even the long-awaited return of their All-American and U.S. Olympic Softball team member, #48/Bubba Nickles, nor the rest of the Bruins batting order, never intimidated Houts. She was masterful in facing only the minimum number of (21) batters while striking out (14),

And, so as time and the innings passed, the Bruins could never mount an offense, and by the 5th inning, Garcia was simply not herself, after surrendering a 3-run blast to #12/1B/Kaylee Tow making the score, (5-0) Crimson Tide. They scored one more in the 6th to make it (6-0). Coach Inouye-Perez had to pull Garcia after going 5.2 innings and brought in reliever, #4/Holly Azevedo to finish out the game. She was effective in facing just four batters, but the damage was done and the game was in the “W” column for Alabama and their “Perfect Game” pitcher, and birthday girl, Montana Houts, who moved her season record to a resounding (27-3).

(Next Up): #1 Seed, Oklahoma Sooners @ 4:00 pm (PT); Game will be televised on ESPN. Please note that this is a Loser’s Bracket game and the loser will be eliminated.